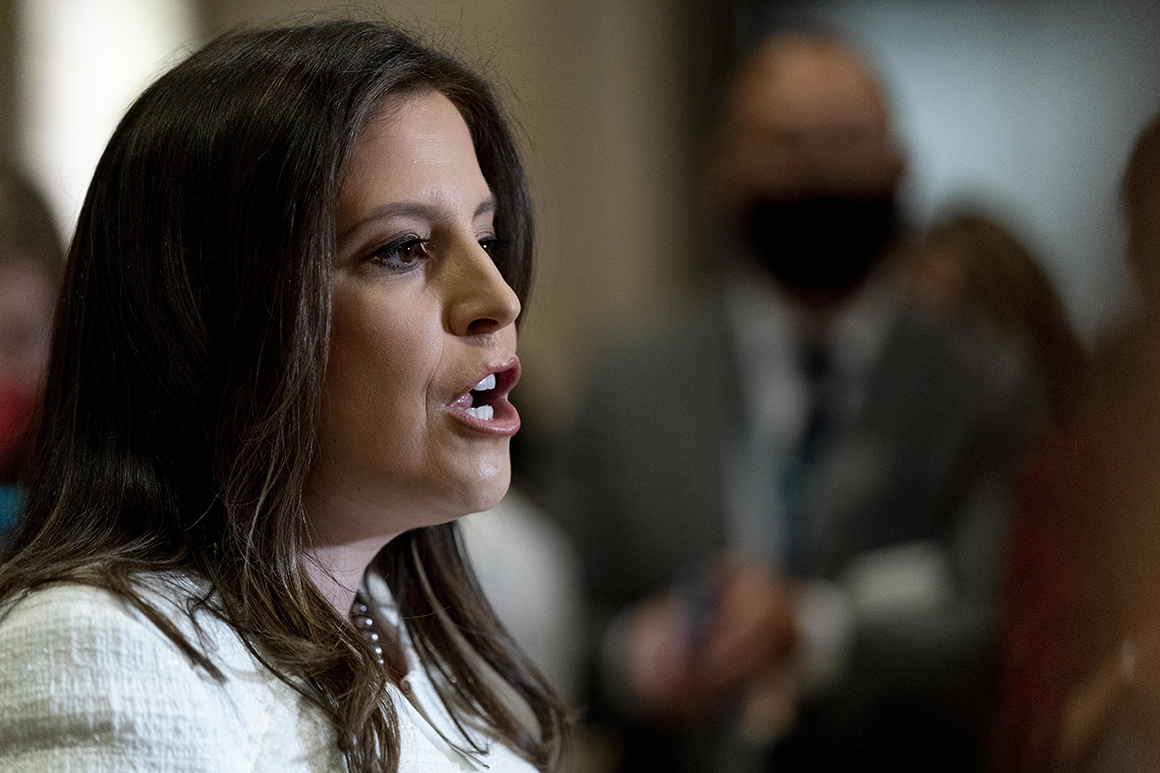 New York Rep. Elise Stefanik, who questioned the legitimacy of the 2020 election and voted against certification of Joe Biden’s win, currently serves as a board member for a revered U.S. organization dedicated to the promotion of democracy.

The congresswoman’s position on the National Endowment for Democracy’s board has rankled fellow Republicans, foreign policy scholars and some former NED board members, who say her statements, along with her support for GOP-authored election laws, are at odds with the organization’s mission.

“How is it consistent for someone like her to be on the board of NED given its mission for promoting democracy all over the world and in America with the view that she and many Republicans have for changing our election processes to make it harder for people to participate in our democracy?” said former House Majority Leader Dick Gephardt (D-Mo.), a former NED board member.

“It’s kind of like the Catholic Church appointing a self-described atheist as a cardinal,” said Max Boot, a senior fellow at the Council on Foreign Relations. “Elise Stefanik is part of the threat to American democracy. It’s a travesty that she’s on the board of an institution whose goal is to promote democracy.”

Stefanik’s remarks also have caused internal tensions at the congressionally funded, non-partisan organization. After the Jan. 6 Capitol riots, some staffers at NED circulated a letter internally raising concerns about her position on the board, according to four people familiar with the matter.

“There was a lot of staff unhappiness,” said one of the people.

A NED spokesperson confirmed that the group’s president, Carl Gershman, received the letter and informed the board of directors of its contents. When the board met on January 8, members discussed both the insurrection and Stefanik’s position on the board for roughly half an hour. Stefanik did not attend the meeting and no formal vote or action was taken on her membership, according to a person familiar with the meeting. But some board members bristled at staff trying to interfere with the makeup of the board.

“Who is in the Board is a Board decision and the staff has no role in it,” one NED board member said in a text message. “It’s totally improper for them to try to veto Board members.”

Ultimately, officials at NED have not budged. Though the group denounced the violence at the nation’s Capitol, it has held firm to the belief in the need for bipartisan representation in its ranks.

“The Endowment is a congressionally funded and authorized organization and, as such, has relied on, and benefitted from broad bipartisan support,” NED chairman Kenneth Wollack said in a statement. “This support is even more remarkable given our country’s polarized political environment. We do not have litmus tests on views expressed by individual Board members.”

When called for comment, Gershman, who is retiring later this summer, said: “People are elected to three-year terms and she’s in her first term and that’s all I have to say about that.”

Ali Pardo, a spokesperson for Stefanik, said the congresswoman was “proud to have one of the strongest records in the House supporting and leading bipartisan efforts to fund the National Endowment of Democracy and the mission of supporting and strengthening democratic institutions around the world.”

She added that, “Congresswoman Stefanik is one of the most prominent voices countering authoritarian regimes like Russia, China, Iran, and North Korea, especially through her work on the House Armed Services Committee and the House Permanent Select Committee on Intelligence.”

The National Endowment for Democracy was founded as an independent, but government-funded non-profit in 1983 for the purpose of strengthening democratic institutions by supporting civil society around the world. President Ronald Reagan, in a speech in 1982, had called for such an organization to be created to “foster the infrastructure of democracy” and Congress authorized funding the next year.

Over the years, it has provided small grants to thousands of private civil-society groups and earned a reputation for giving support to groups promoting democratic values and institutions in closed societies and aspiring democracies. It spends $300 million a year funding activists who work on free and fair elections, free markets and human and labor rights in projects in around 100 countries.

Stefanik was elected to the board in January 2019. A Harvard graduate who had risen rapidly through the ranks of Republican institutions, she was considered an up-and-coming, policy-minded conservative. She had worked in the Bush White House on the Domestic Policy Council and was a staffer on Paul Ryan’s 2012 vice presidential campaign; establishment figures like Tim Pawlenty and Paul Ryan championed her career. When she won a seat in Congress in 2015 from an upstate New York district at age 30, she became an immediate star in the GOP firmament.

But within a year of joining NED, the congresswoman’s reputation changed. She played a prominent role defending then-President Donald Trump during his first impeachment, even earning a shout-out at the White House after his Senate acquittal. After the 2020 elections, she questioned whether the presidential results in Georgia — a state Joe Biden narrowly won — were fraudulent, saying that “140,000 votes came from underage, deceased, and otherwise unauthorized voters” in Fulton County. No such fraud took place though Stefanik has not backed off her initial accusation.

On the day of the Capitol riots, Stefanik condemned the violence but refused to blame Trump for inciting it. She subsequently voted to object to the certification of Biden electors in four states.

“President-Elect Biden was certified, but that debate was important for the American people to hear,” she said.

In the weeks and months since, Stefanik has voted against the creation of a commission to look into what happened on Jan. 6. She also told Steve Bannon’s radio show in May that she “fully” backed the widely-criticized Arizona election “audit” into that state’s presidential vote.

Her alliance with Trump helped her ascend politically. When the Republican Party moved to oust Rep. Liz Cheney (R-Wyo.) as House Republican Conference Chair, its members turned to Stefanik as a replacement. When Stefanik got the job, she thanked Trump for his support.

Stefanik is not the only sitting lawmaker to work with NED. Sens. Tim Kaine (D-Va.) and Ben Sasse (R-Neb.) are honorary board members. Rep. Karen Bass (D-Calif.) is a NED officer, serving as vice chairman.

Rep. Roger Williams (R-Texas) voted against certification and also serves on the board of Texas Christian University, where a brief pressure campaign was launched to have him removed after the Capitol riot.

Though NED focuses almost exclusively on promoting democracy abroad, the organization did weigh in on the insurrection at the Capitol. In a statement, it called the event a “violent and seditious assault” and said that “after a free and fair election, when incumbents are defeated, a peaceful transfer of power must result.”

“The integrity of elections in this country is a proper topic for the NED, although it’s not their focus, and I think respecting the integrity of the election we just went through is something that I’m sure most of the [board members] care about,” said former Republican Congressman Vin Weber, who served as chairman of NED from 2001 to 2009. Weber declined to specifically discuss Stefanik’s role on the board.

In its April 2021 issue, the Journal of Democracy — an initiative of NED and published jointly by NED and Johns Hopkins University — ran an article that called out lies about voting fraud in the U.S., saying it had “cemented a perception among tens of millions of Americans that the election was ‘rigged,’” and “manufactured distrust” that had “deeply damaged our democracy; the path to repairing it is not at all clear.”

One of the authors of that article, Charles Stewart III, a professor of political science at MIT, said Stefanik was a “soft enabler, certainly” of Trump. But he also said he thought she could continue serving on NED’s board.

“I wish Republicans had not gone down the path of even hard or soft denial of the election outcome but it seems to me if we’re going to have bipartisan boards and commissions inevitably we’re going to have people who defended parts of Trump’s denialism,” he said. “That is kind of the nature of bipartisanship these days.”