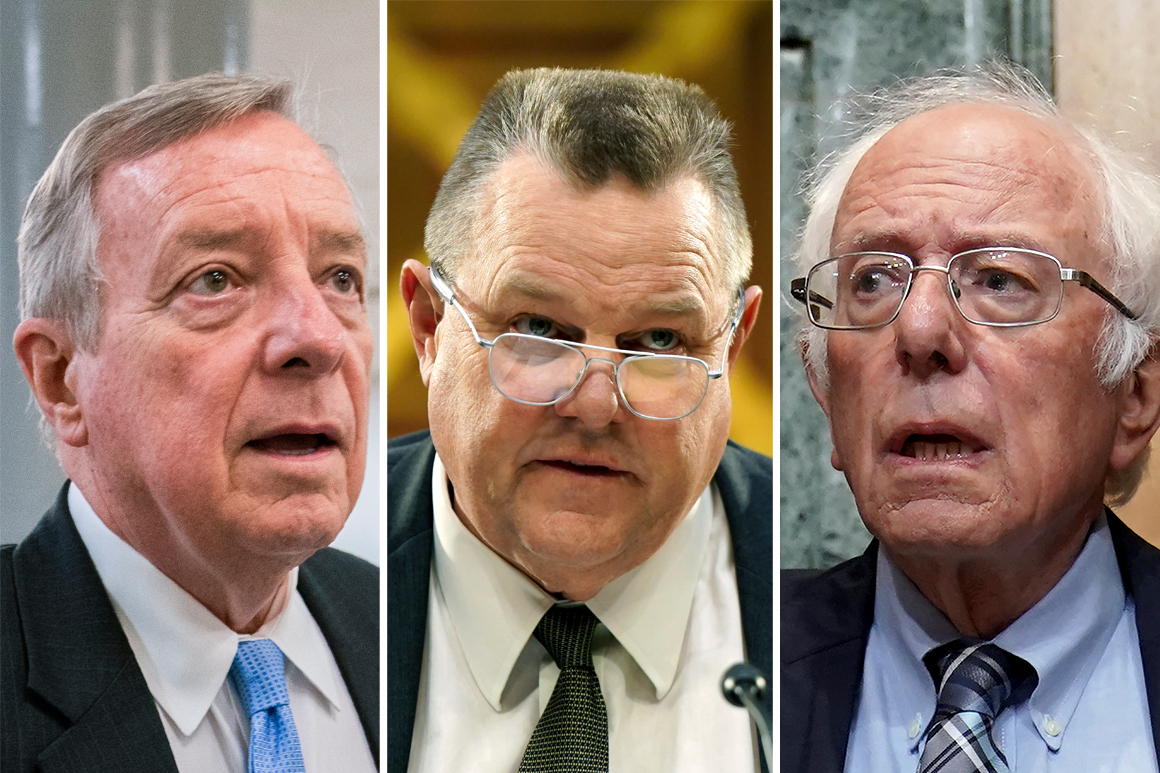 Ask three Democrats what they want in a sweeping partisan spending package and you’ll get three different answers.

“It could be massive, but I don’t think you’re going to get support for a massive bill,” Tester said, acknowledging that it’s hard to say since discussions are in such early stages. “That’s crystal ball shit.”

Democrats are grappling with whether to pair a bipartisan infrastructure proposal with a more progressive spending plan passed along party lines — and with how soon to push forward on either bill. There’s a problem, though: The party and its reed-thin majorities are nowhere near agreement on how big that spending package should be and what should be in it, with a left flank threatening mutiny if certain demands are not met.

And they need lock-step unity in the Senate, plus near unanimous agreement in the House, to pass anything at all using the filibuster protections of budget reconciliation. Without that total unity, President Joe Biden and congressional Democrats could see a key campaign promise stalled indefinitely.

Still, Sen. Joe Manchin (D-W.Va) said in an interview on Wednesday he’d like to begin conversations with those who want to pass a bill through budget reconciliation.

“I’d like to see a good piece of legislation and I think we can all start working on it now,” Manchin said. “I’m not opposed to doing anything that’s going to help our country. Absolutely not opposed. Just need to see something.”

The alternative to a so-called “two-track” approach would be to devise one large bill among congressional Democrats, though at the moment not all 50 Senate Democrats support cutting out Republicans. It’s also not clear that the marriage of a bipartisan infrastructure bill that would spend nearly $600 billion with a partisan package is any easier than passing the two plans separately.

Manchin and other centrists pressed forward with the bipartisan package on Wednesday and expect support to increase among the group of 20 moderates who have been debating myriad issues. Ten senators endorsed a rough framework last week, and support for it doubled Wednesday as 21 senators, including 11 Republicans backed a framework that’s still short of public details.

The legislation would provide $579 billion in new spending for infrastructure projects, the bulk of it on highways, bridges, railroads, energy infrastructure, broadband and public transportation, according to a draft proposal being circulated in the Senate. It would be paid for with infrastructure banks, public-private partnerships and unused covid relief funds. Indexing the gas tax to inflation and fees on electric vehicles have also been proposed but met resistance from the White House and some Democrats.

Many progressives want any bipartisan deal to be paired with legislation that sketches out the rest of Biden’s agenda and spend even more than the $4 trillion the president pitched. The Congressional Progressive Caucus — with roughly 90 members in the House — has outlined more than $6 trillion in spending. But there’s almost no way Senate moderates would go for that. And while Senate liberals are demanding action before breaking for August, some House Democrats are indicating they might wait until September.

Democrats have just a few more weeks to reach something resembling party unity: the House and Senate are expected to vote on their budget resolutions sometime in July, requiring their members to be in lockstep.

Senate Democrats on Sanders’ Budget Committee met with Senate Majority Leader Chuck Schumer on Wednesday and the party as a whole is in the “earliest stages of conversation” about how to proceed, Durbin said. The senators did not come up with a spending number on Wednesday, but Sanders said afterward that Democrats agreed on broad swaths of their approach, including that “the wealthiest people, wealthiest corporations pay their fair share of taxes.”

Sanders also said beforehand that he had a big spending number in mind for Democrats but declined to divulge it: “I ain’t telling you.”

“When someone comes to me trying to pitch the bipartisan deal, I try to explain to them it’s not the main thing. The main thing is what remains to be done. For me it’s climate ambition,” said Sen. Brian Schatz (D-Hawaii). “You could spend two trillion but if you don’t take climate action I’m a no.”

Many liberals are threatening to scuttle the bipartisan plan without more clarity on the approach Democrats will take on the follow-up partisan bill.

The dissension is grating on some in the party. Rep. Josh Gottheimer (D-N.J.), a leader of the centrist Problem Solvers Caucus, warned that his colleagues could “end up going home with nothing” if they try to skip over the bipartisan talks he is pushing. And he warned against a “food fight” over reconciliation when bipartisan talks are still ongoing.

“Everybody’s drawing lines in the sand, and that’s their prerogative,” said Rep. Dean Phillips (D-Minn.), another centrist who advised Democrats should all be “giving up a little something. We have a propensity of always allowing the perfect to always interfere with the much improved.”

On the House side, the tussle over what should make it into a Democrat-only bill has vexed the caucus for months. Many members began plotting that package practically the day after Biden signed his first reconciliation bill — a sprawling pandemic aid package — weighing which of their wish-list items could pass muster with the Senate’s restrictive budget rules.

“The reality is, this is urgent and we do need to get these things done,” Rep. Pramila Jayapal, who leads the roughly 90-person progressive group and has vocally urged the White House to call off its talks with the GOP.

The Washington Democrat has said many of her members won’t be willing to support a bipartisan deal unless party leaders commit to a separate, partisan process that can deliver many more of their priorities — potentially holding up any potential bipartisan agreement on the floor.

“When people gave us the House, the Senate and the White House, they did not give it to us intending that we would come back to them and say, ‘Oh I’m sorry, we couldn’t do this, that or the other thing.’”

Rep. Chuy Garcia (D-Ill.), another House progressive, added this warning: “I believe that if we don’t go big, we’re not going to be able to keep our majorities.”