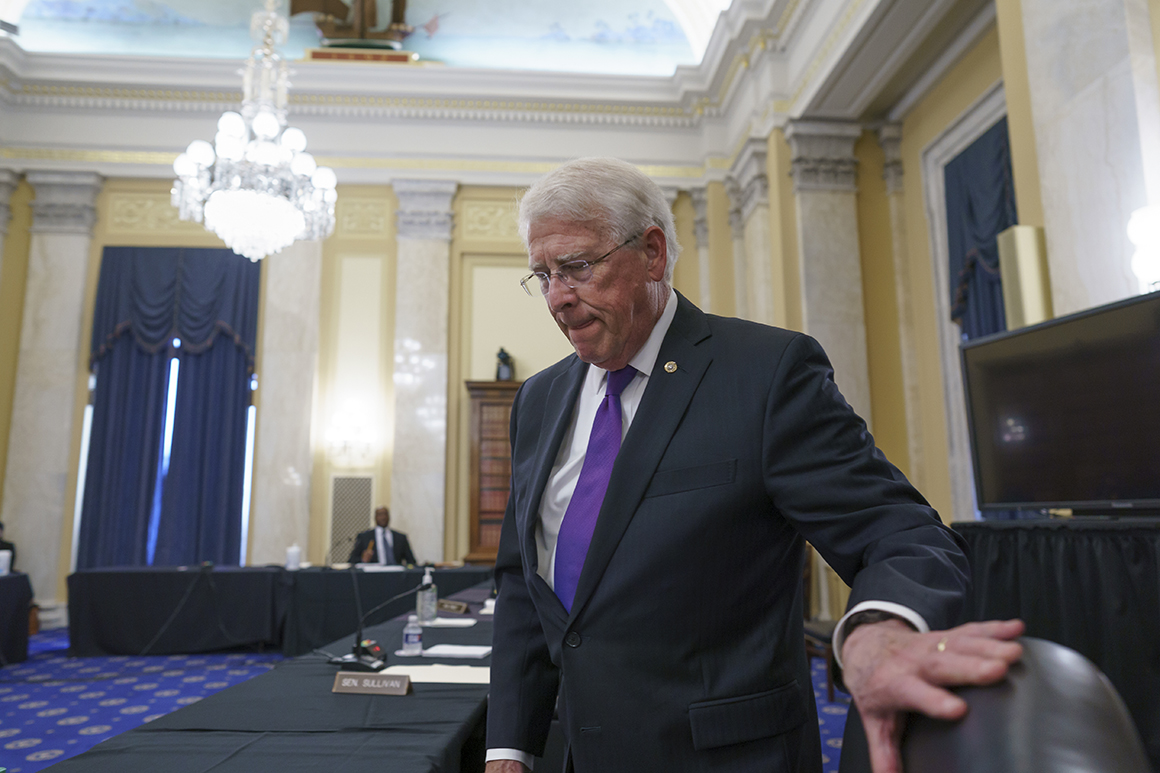 Republican Sen. Roger Wicker is holding up a high-level Pentagon nominee in an attempt to push the Navy to commit to buying more amphibious ships, according to two people familiar with the situation.

The nominee, Susanna Blume, had been tapped to run the Pentagon’s Cost Assessment and Program Evaluation office, which would give her a central role in assessing new weapons systems proposed by the armed services. The veteran of the Obama Pentagon largely sailed through her confirmation hearing in May, and her nomination has been sent to the full Senate for a vote with several other top picks for the department.

Wicker, the second-most senior Republican on the Senate Armed Services Committee, slowed down her nomination in an effort to pressure the Pentagon into following through with a congressionally mandated rule to buy four amphibious ships in a single “block buy,” which proponents say would be cheaper than acquiring the ships individually, the people said. Defense policy legislation enacted in January mandated the contract, but the four ships were left out of President Joe Biden’s fiscal 2022 budget submission. Recent comments from Navy officials make the contract’s eventual award far from a sure thing.

In a statement to POLITICO, Wicker blamed the White House and professional budgeteers for undercutting Navy plans to significantly expand the fleet that have the support of shipbuilding boosters on Capitol Hill.

“Congress provided the Navy the authority and direction to pursue a block buy of amphibious ships to save hundreds of millions in taxpayer dollars and help to stabilize the industrial base,” said Wicker, who did not mention the hold on Blume in his statement. “But the Biden Administration has chosen to ignore this direction and the advice of Navy and Marine Corps leaders in its recent budget and shipbuilding plans. The United States doesn’t need bureaucrats putting their ‘armchair opinions’ on warfighting above those of our men and women in uniform.”

Wicker’s action alone isn’t enough to block Blume’s confirmation if Senate Democrats want to force the issue on the Senate floor. Majority Leader Chuck Schumer could file cloture — a procedural motion to shut of debate on a nominee or bill — and force a vote that requires only a majority of senators to agree to advance her nomination.

Acting Navy chief acquisition executive Frederick Stefany recently suggested the four-ship contract might come in the fiscal 2023 budget submission, though that decision is contingent on the results of a new fleet assessment that will be conducted this summer and fall — in part by the same CAPE office that Blume has been tapped to lead.

Stefany told the Senate Armed Services Committee’s Seapower subpanel on June 9 that the Navy had reached a “handshake agreement” with shipbuilder Huntington Ingalls Industries for the four-ship procurement to happen possibly by 2023.

“It’s not a done deal,” he said. “It’s going through the process within the department for a final decision.”

Wicker, whose state of Mississippi is home to Ingalls Shipbuilding in Pascagoula that builds Navy destroyers and amphibious ships, is an advocate for increasing the size of the Navy to at least 355 ships and warned that Biden’s budget proposal “doesn’t get us anywhere near back on the path to do that.”

The block buy would involve one America-class and three San Antonio-class amphibious ships.

The Mississippi Republican, like many defense hawks on Capitol Hill, has slammed the Biden administration’s $715 billion defense budget request as underfunding the military’s needs. He’s called out the Navy’s failure to fund a second destroyer and execute the block purchase of amphibious warships, which Pentagon officials have chalked up to tough budget calls.

“While we appreciate the suggestion by OMB budget crunchers, it is our obligation to defend this nation, and this proposed budget does not do so,” Wicker said.

A Senate aide said Wicker wants the Pentagon to agree to follow through and agree to execute the package deal Congress authorized before the authority for the block purchase expires in the fall, but warned the potential savings would diminish over time if the deal is delayed. Once the Pentagon seals the deal, lawmakers will be able to allocate money to begin work on the new ships in annual defense policy and spending legislation.

The amphibious ship bundle has drawn bipartisan concerns in the Senate. Wicker and Virginia Democrat Tim Kaine sent a letter to Austin in May urging him to act immediately, extolling the budget savings and certainty to the shipbuilding industry the deal would provide. The pair warned that inaction “is causing uncertainty in the already-fragile industrial base.”

Blume was part of a raft of nominees approved by the Senate Armed Services Committee on June 10, but the full Senate must consider them before they can be confirmed. Included in the vote was nominee for Air Force Secretary Frank Kendall, whose nomination has also been placed on hold by several senators.

Sens. Elizabeth Warren (D-Mass.) and Gary Peters (D-Mich.) — Senate Armed Services Committee members — and Sen. Mike Lee (R-Utah) slapped procedural holds on Kendall this month. Warren is looking to extract several ethics pledges from Kendall, who previously worked for Raytheon and sits on the board of directors of Leidos. He has also consulted for various defense companies. At the same time, Peters opposes the Air Force’s decision to pass over Michigan’s Selfridge Air National Guard Base as the location for a new international training center for the F-35 fighter.

The two holds come as the Biden administration slowly fills in political appointees across the government, and as the Pentagon works on a new National Defense Strategy and Nuclear Posture Review, both of which are expected to be released next year.

The hold on Blume also comes at a critical time as the military rushes to modernize and innovate with new technologies to stay ahead of Chinese and Russian advances in areas such as hypersonic missiles, electronic warfare and long-range precision weapons. Blume has been working as CAPE’s acting director since Jan. 20, and played a role in the fiscal 2022 defense budget request, the Biden administration’s first.

Blume had previously served in the Obama administration as deputy chief of staff for programs and plans in the office of the deputy secretary of defense, and was also director of the Center for a New American Security’s Defense Program until January.

Asked about the holdup, Pentagon press secretary John Kirby said, “we are eager for the Senate to act on all our pending nominees. …This certainly would include Ms. Bloom, who is eminently qualified to direct the efforts of the Cost Assessment and Program Evaluation office. The Secretary looks forward to serving with her.”

The CAPE office was directly involved in last year’s “Battle Force 2045” shipbuilding plan put together by then-Defense Secretary Mark Esper, and was central to building the Navy’s fiscal 2022 budget submission. The plan has found few friends on Capitol Hill because it cuts the number of ships the service planned to buy and punts on any long-range reassessment of the fleet until 2023 or after.

The push for more amphibious ships — which can transport Marines and aircraft including F-35s to hot spots quickly — and frustration with CAPE have become increasingly intertwined.

On June 14, Reps. Rob Wittman (R-Va.) and Steven Palazzo (R-Miss.) introduced legislation to withhold 50 percent of CAPE’s budget until the Navy executes a “bundle-buy contract” for the four amphibious ships.

Packaging the ships in one large contract would save $720 million, they contend. “The Navy still wants these ships and has signaled they will build them,” Wittman said in a statement, slamming “faceless political bureaucrats” for kicking the contracts down the road.