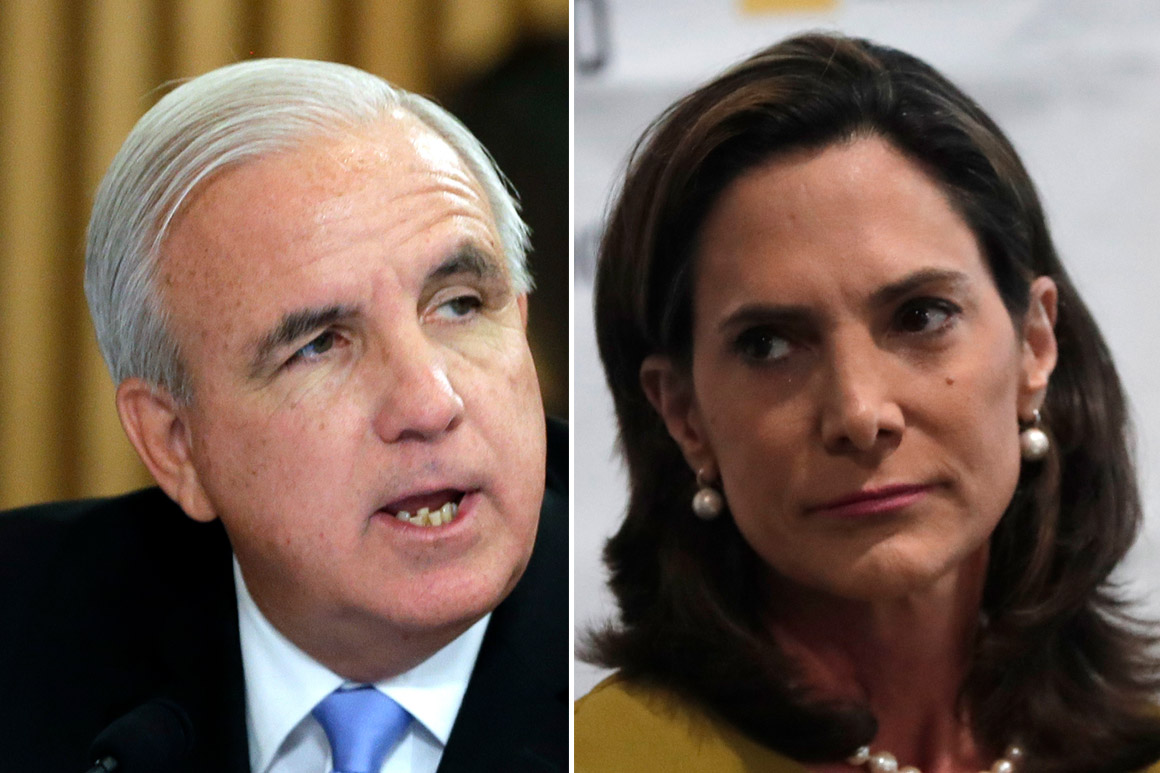 While Republicans hammer the Biden administration over rising migrant crossings at the southern border, two members of their House freshman class are swimming against the Trumpian tide to try to steer their party toward a more welcoming immigration strategy.

Florida Reps. María Elvira Salazar and Carlos Giménez are somewhat lonely voices in the GOP, in part because the migration influx soon after President Joe Biden took office gave Republicans an opening to paint Democrats as soft on the border. But Salazar and Giménez are promoting separate frameworks to overhaul the nation’s flawed immigration system that could help their party build on the surprising inroads former President Donald Trump made with Latino voters last fall.

Both of them toppled Democratic incumbents on their way to winning last fall. And both freshmen want to see Republicans embrace a path to citizenship for undocumented immigrants currently residing in the U.S. — albeit paths that are harder to walk than Biden and Democrats would want.

Their work to win more GOP buy-in for a comprehensive immigration plan is made more complicated, however, by the party’s attraction to blunt-force messaging on border security as the Biden administration grapples with the issue.

“The problem with the border is, it’s an urgency that has overshadowed the importance of us giving some type of dignity or some type of resolution to those people who have been here for more than 10 years,” Salazar said in an interview. “We’re talking about 11 million people that are waiting for an answer.”

The former journalist and daughter of Cuban refugees campaigned as a new voice on immigration in the GOP and has urged fellow Republicans to join her in helping migrants hoping to gain citizenship or work permits in the U.S. Salazar, who grew up in Miami’s Little Havana area, argues that a sweeping GOP immigration proposal would help the party at the ballot box: “I am a brown girl from the ‘hood, who is a Republican, who is coming to tell my party that it’s time to wake up and smell the votes,” she said in February after challenging ultra-conservative Trump adviser Stephen Miller on the matter during a closed-door meeting.

She has rolled out a plan that would offer deportation protection to so-called Dreamers brought into the country illegally as younger people and a 10-year path to achieving a renewable legal status for employed undocumented immigrants with a clean criminal record. Salazar’s approach also expands visas for agricultural workers and boosts border security, a must-have for almost all of her party.

Giménez, a former Miami-Dade mayor, has offered a less sweeping overhaul that would still represent a huge step forward for the post-Trump GOP. His proposal would allow undocumented immigrants already working in the U.S. to pursue a pathway to citizenship by applying through their country of origin, without having to return to their countries to do so. Gimenez’s plan would effectively sweep them into the current system without putting them ahead of anyone else seeking legal immigration status.

“To me that’s a much simpler way,” Giménez said in an interview. “Different countries have different quotas. Some people may make it to citizenship and some people may not, but I’ll tell you what — I think that most of the undocumented immigrants here, all they want to do is go out in the light.”

“There’s a practical impossibility to deporting them,” he added. “They’re a productive part of our society for the most part.”

Salazar and Giménez have some support in urging their party to do more than amplify hardline Trump-era messaging on migration deterrence. Eight House GOP colleagues and onetime immigration deal-maker Sen. Lindsey Graham (R-S.C.) have backed Salazar’s proposal, for example. But amid rising crossings this year, most Republicans are clinging to their demand that the Biden administration address border security before they’ll work on a more wide-ranging immigration bill.

Salazar and Giménez’s efforts come after past Republican-driven attempts on immigration reform have failed miserably. The most recent try in 2018 was voted down by a wide margin, after more than a month of negotiations between conservative members of the House Freedom Caucus, more immigrant-friendly moderates and GOP House leadership.

That leaves the party’s aspiring immigration reformers with fewer tools to get a broader coalition of Republicans on board.

“Republicans are more unified than ever before that amnesty is a non-starter and we must secure the border,” said Republican Study Committee Chair Rep. Jim Banks (R-Ind.), whose caucus is the largest in the House GOP.

The RSC has played a key role in shaping GOP messaging on immigration, including the development of a framework shared with leadership that Banks described as “guardrails for any future immigration deal.”

House Republicans have repeatedly highlighted signs of the Biden administration’s struggle to contain rising migration, a message they see resonating with their base. Their members on the Oversight and Reform Committee, for example, have sent three letters to the panel’s Democratic chair in recent weeks pushing for a hearing on the border.

Polling suggests that the party’s core voters are indeed closer to Banks than Salazar and Giménez on immigration. When the nonpartisan Pew Research Center last month asked if it was important to reduce the number of people coming to the U.S. seeking asylum, 78 percent of Republicans said yes — compared with 39 percent of Democrats.

A clear majority of Americans surveyed by Pew also were critical of the government’s work handling the recent uptick in migration, with 68 percent of respondents saying it was doing a very or somewhat bad job at the border.

Salazar counters that her plan, which calls for “triggering mechanisms” to be in place to ensure border security is addressed before other reforms can take place, will also help her party connect with voters. Many undocumented immigrants seeking a path to legal status identify with the GOP brand of limited government and consider themselves oriented with traditional faith-based values, she says.

In addition, she argues, many Latino voters are uniquely receptive to her party’s message of tagging progressive Democrats as “socialist,” having witnessed socialist leaders preside over fraying social fabrics in Venezuela, Nicaragua, Cuba and other nations.

“Hispanic Americans understand, regardless of whether they’re Cubans, or Venezuelans, Nicaraguan, Salvadorians. We all have an experience with socialist forces trying to invade our countries and we know how that ends,” Salazar said. “They all promised paradise and you know what they got in the end? Hell.”

And top Republicans aren’t exactly tuning out Salazar and Giménez as they look to court new Latino voters in their push to regain the majority next fall, but they aren’t endorsing their plans either.

“I would say that Carlos and Maria have a unique perspective on these types of issues and I think we should be listening to them,” Rep. Tom Emmer (R-Minn.), chair of the National Republican Campaign Committee, said in an interview. He declined to advocate for one policy or another, noting that it would be a decision for the GOP conference to make.

“But as the Republican in charge of the campaign chair, what we’re going to not be for is open borders,” he added, pointing to “a lot of different ideas” about immigration reform in the GOP.

Some advocacy groups say Republicans should be adopting an immigration position that looks more like their two Florida freshmen’s, arguing it will benefit them in the long run.

“Republicans have made the calculation that an obstructionist, xenophobic immigration message will play well with their base,” said Sergio Gonzales, the Executive Director of the Immigration Hub. “The problem for them will be that is just not true, and fair, humane immigration solutions are widely popular with the American public across the political spectrum.”

Gonzales also warned that Democrats could see negative consequences at the ballot boxes if they don’t do a better job communicating to Latinos on where they stand on immigration.

Emmer, meanwhile, said he plans to rely on in-state outreach to incumbents and candidates to win over Latino voters. The NRCC chair cited freshman Rep. Tony Gonzales’ success flipping a majority-Hispanic Texas district that he says he was warned: “You are never going to win.”

Gonzales, after defeating his Democratic foe last fall, released a bipartisan border security bill backed by the U.S. Chamber of Commerce. He also voted against bills helping farmworkers and Dreamers that Salazar and Giménez supported.