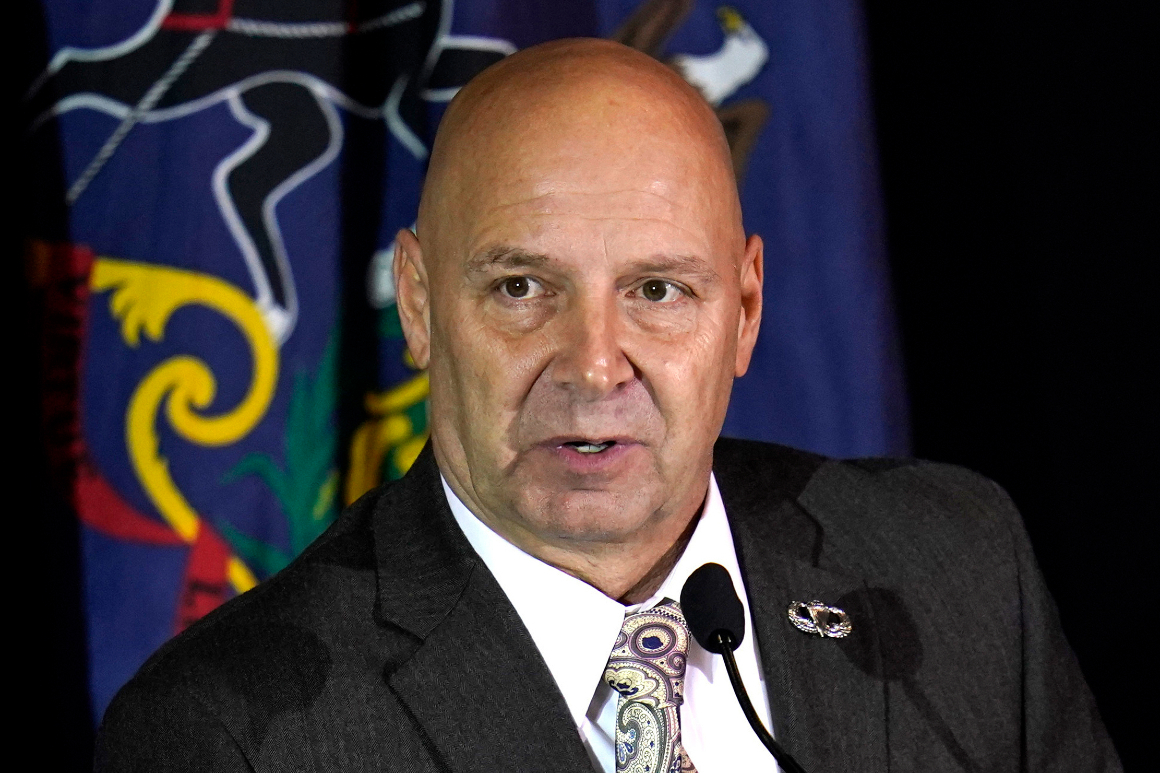 As recently as three years ago, Doug Mastriano was a political nobody who finished fourth in a House primary in Pennsylvania.

Now, having hitched himself to Donald Trump’s election fraud lie, his fortunes have changed dramatically. Rudy Giuliani recently headlined a fundraiser for him. Over the weekend, Mastriano finished first in a gubernatorial straw poll at the conservative Pennsylvania Leadership Conference. Next week, Mastriano will appear with Michael Flynn, the former Trump national security adviser, as “special guests” at an event for Kathy Barnette, a Republican candidate for U.S. Senate in Pennsylvania.

Mastriano’s sudden ascent from failed congressional candidate to state senator to leading voice in the national movement to discredit the 2020 election results is a familiar portrait of political ambition. But it’s also a revealing snapshot of Trump-era GOP politics, and how the baseless claims of 2020 election fraud are shaping next year’s election landscape.

“The hard-core base — Mastriano’s playing to it,” said Carl Fogliani, a Republican strategist based in Pittsburgh. “He has a following among core activists, and he’s trying to grow it out.”

A little-known state senator from central Pennsylvania until last year, Mastriano began developing a following among grassroots conservative activists even before the November election for his outspoken criticism of coronavirus-related restrictions.

He was “ahead of the curve” of other politicians on the issue, said Lowman Henry, president of the Pennsylvania Leadership Council, which puts on a state-based gathering of conservative activists.

Following the election, Henry said, “as is his typical fashion, he mounted the horse and led the charge on the election fraud issue as well, which only I think added to his luster with the Trump base, which is very large in Pennsylvania.”

In the months after the election. Mastriano built a national profile, beginning with his role in organizing a post-election hearing-turned-spectacle in Gettysburg featuring Giuliani and a call-in from Trump. And ever since, his fingerprints have been all over efforts by Trump and his allies to undermine the results of the November election. He was present in Washington on Jan. 6, the day of the U.S. Capitol riot. He visited Arizona recently to observe the ballot review there. And he pressed for a review of ballots elsewhere, including in Fulton County, a rural county that Trump won easily near Mastriano’s district.

Al Schmidt, a Republican elections commissioner in Philadelphia who was pilloried by Trump and his supporters for refusing to capitulate to baseless claims of voter fraud, recalled that Mastriano was “pretty vocal” during the presidential campaign but mostly struck him as just “a state senator from someplace else in Pennsylvania.” 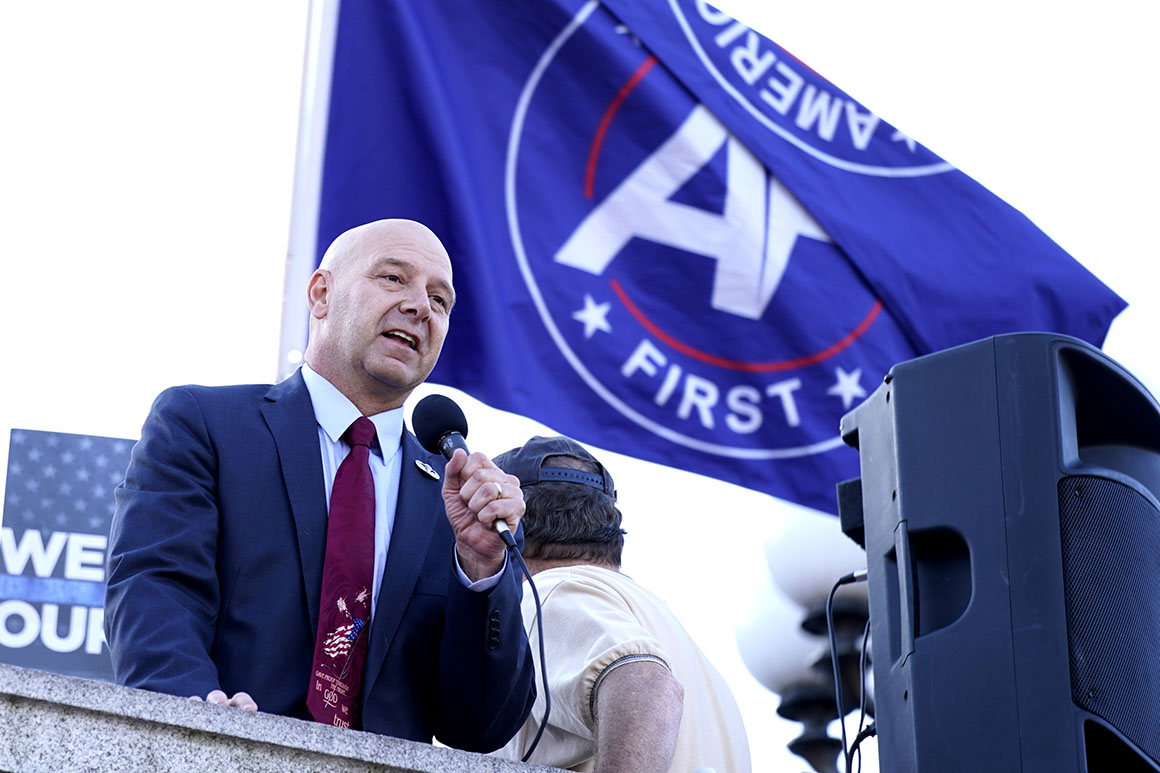 He said, “It’s actually difficult to articulate what is going on, because it is so utterly detached from reality, and that was that the election was free and fair and not even close.”

Mastriano’s efforts have not produced evidence of widespread election fraud, but they’ve given him leverage in a likely run for governor. He met with Trump at Trump Tower in New York in May, and CNN is now tracking him down at events in his home state. Mastriano said Trump himself has encouraged him to run for governor.

“A year ago, would anyone have known Mastriano’s name out of a 50-mile radius of his district?” said David Becker, executive director of the nonpartisan Center for Election Innovation & Research, lamenting what he called “a large segment of grifters that are looking to cash in” on baseless accusations of voter fraud. “And now, he can likely fundraise nationally off his name, his connections to Trump.”

It’s possible Mastriano is making too much of his connection to Trump, aggravating some in Trump world. After Mastriano said in a radio interview last month that the former president had asked him to run for governor, Jason Miller, a Trump adviser, said on Twitter that Trump “has not made any endorsement or commitments yet in this race.”

Still, when Mastriano and two other Pennsylvania lawmakers later traveled to Arizona, Trump heralded the “great patriots” led by Mastriano. That kind of statement — when repurposed on a mailer — could be significant in a Republican primary in Pennsylvania next year.

Mastriano, who did not respond to a request for comment, has said he’s still considering whether to run for governor, but he is widely expected to. The Republican primary is likely to be crowded, including former Rep. Lou Barletta and, potentially, Rep. Dan Meuser and former U.S. attorney Bill McSwain, among others.

“I think he’s probably got a pretty low cap in terms of the percentage of the primary electorate he can go after, which is probably what he’s trying to increase now in terms of going to Arizona and everything, in terms of being the Trumpiest of the Trumpers,” said Joshua Novotney, a Republican lobbyist and former adviser to Sen. Pat Toomey of Pennsylvania.

Given his relatively low name recognition, even after his ballot audit crusade, Novotney said, “I don’t think he’ll impress too many donors.”

He said, “A lot of the Trump supporters are trying to move on and win races… even if they feel things may have been stolen.”

Still, the fact that Mastriano is even in the mix is a long way from 2018, when he couldn’t even get out of a congressional primary, finishing fourth in the race for an open seat in a solidly Republican district in southern Pennsylvania.

Today, the retired Army colonel is one of the most prominent examples of a class of politicians who are building careers off the doubt cast on the results of the November election, both benefiting from and reinforcing the belief in Trump’s lie — widely held position among Republican voters — that the election was rigged.

Across the country, several Republicans who have backed Trump’s claims of voter fraud are running to become secretaries of state. Earlier this week, Wren Williams, a lawyer who helped represent Trump during recounts in Wisconsin, unseated a longtime Republican in a state house primary in Virginia.

“[Mastriano] absolutely has the right idea that we still don’t have a full accounting of what happened in the 2020 election,” said Bruce Marks, a Republican lawyer who has done work for the Trump campaign and who met with Mastriano last month. “I think he’s absolutely on the right track.”

Marks, a former Pennsylvania lawmaker who was seated as a state senator only after a court determined in 1994 that widespread voter fraud had resulted in his Democratic opponent’s apparent victory, said he met with Mastriano largely to share with him the details of that case — a rallying cry for Republicans who insist that the presidential election can still be overturned.

Not long after the meeting, Mastriano invoked the case at a rally in Harrisburg.

“I wish this was like 1994,” Mastriano said, suggesting the media that year had done a “fantastic job” finding fraud. In the same speech, Mastriano compared the November election unfavorably to elections run in “war-torn Kosovo,” Bosnia, Iraq and Afghanistan.