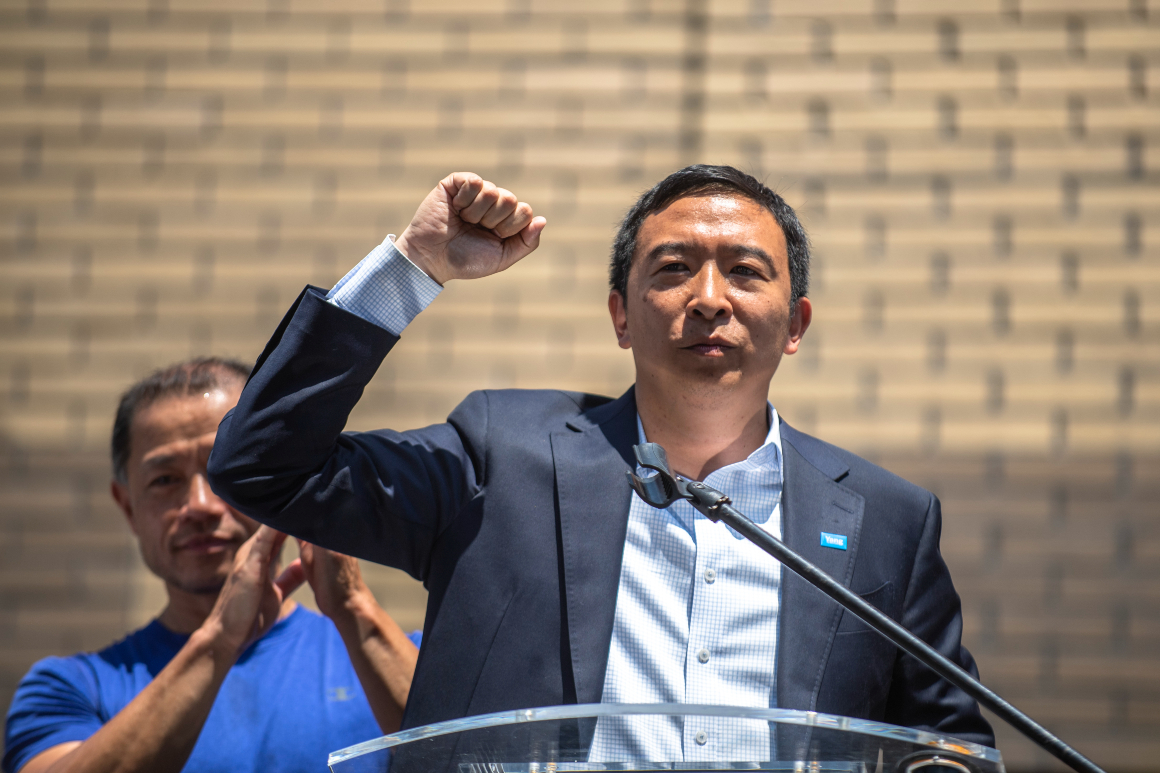 On Tuesday, the published author and entrepreneur — who made a name for himself with a longshot presidential run — limped to a distant fourth-place finish in the crowded field of Democratic candidates looking to replace outgoing Mayor Bill de Blasio.

The final results of the primary race will not be finalized for weeks, as the city Board of Elections tabulates absentee and ranked-choice ballots that can include up to five candidates. The new ranking system will kick in since frontrunner Eric Adams did not secure 50 percent of the vote.

But Yang, recognizing he had too much ground to overcome, conceded the race two hours after polls closed Tuesday night.

“You all know I am a numbers guy. I’m someone who traffics in what’s happening by the numbers,” he told supporters at his election night watch party, on a hotel terrace in Hell’s Kitchen. “And I am not going to be the next mayor of New York City based upon the numbers that have come in tonight.”

It was a disappointing finish for someone who spent much of the race in a comfortable lead. When he launched his campaign in January, during the Covid-19 pandemic’s second wave, Yang was the most famous candidate by far. He topped his competitors in name recognition and quickly amassed a campaign warchest that allowed him to spend more than $8 million on the race. And his early support could be measured in individual donors — 21,138, compared to 9,390 for Adams, according to the city Campaign Finance Board’s latest disclosure.

It was never enough.

Damaging Yang’s chances were both circumstances outside of his control and his own failure to overcome his deficit of knowledge about municipal government.

“[Yang’s team] sensed before most people that people wanted to look forward and wanted somebody who would champion New York City’s comeback and they did that,” city-based political consultant Jonathan Rosen, who was not affiliated with a campaign, said on Wednesday. “I think the problem is they didn’t have a second act in terms of seriousness and policy, and New York City primary voters are smart. They really kick the tires on candidates.”

Two of Yang’s opponents had been in office for years and three had held high-level city government jobs. By comparison, his commitment to municipal government fell short: He had never before voted in a mayoral election — a perceived shortcoming he batted away by arguing he was in good company, due to traditionally low turnout in local races. He also caught flack for leaving the city at the height of the pandemic to decamp to his second home in New Paltz, N.Y.

He sought to make up ground politically by appealing to voting blocs that were up for grabs — namely Orthodox Jews whose community leaders endorsed the political newcomer due in part to his lax stance on underperforming yeshivas. And he energized voters in Asian pockets of the city, particularly after mass shootings in Atlanta and Indianapolis.

A detailed map of preliminary results shows Yang dominated in Flushing, Queens and Manhattan’s Chinatown — a predominantly Asian part of the city. He also performed well in districts with large Orthodox Jewish populations.

But he failed the local civics test over and over on the trail.

In just one week, he held a press conference in which he seemed to misunderstand the financing of the MTA, was publicly corrected for a gap in knowledge about domestic violence shelters and all but admitted to not knowing the commonly-used name of a police discipline statute.

“There is no excuse for not learning about the city you want to lead. But he was amazingly effective in mobilizing voters — especially the young voters as well as the growing Asian community,” said Mitchell Moss, director of the Rudin Center for Transportation at New York University and a longtime chronicler of city politics.

At the same time, the ground shifted beneath Yang.

At the outset, it appeared that a city economically ravaged by a pandemic was ready for his vision: An unrelenting, cheerful belief in the power of positive thinking, bolstered by his promise of cash relief; an outsider who wouldn’t fall into traditional political traps while managing a crisis.

But within a few months of his campaign’s launch, that advantage fell away: Vaccinations skyrocketed and the city reopened within weeks. Businesses went on hiring sprees and workers began making more money — all under the management of those career politicians.

At the same time, an alarming spike in shootings became voters’ primary concern — an issue that, compared to some of his opponents, Yang was ill-equipped to address. Adams had spent 22 years in the NYPD and retired as a captain, a background that offered him credibility to campaign almost singularly on combating gun violence. Yang tried to match him, but was always left in his wake.

And just as Yang’s presidential campaign was beset by insensitive comments about women and minorities, so too was his mayoral campaign. Along the way, he turned off LGBT activists and fumbled his way through the Palestine-Israel debate.

In the final weeks, Yang blamed mentally ill and homeless New Yorkers for the rise in violent crime, arguing they were hampering the city’s economic comeback.

“Yes, mentally ill people have rights, but you know who else has rights? We do! The people and families of the city,” Yang said during a debate co-hosted by POLITICO, NBC New York and Telemundo 47. “We have the right to walk the street and not fear for our safety because a mentally ill person is going to lash out at us.”

Even as Wiley and Adams attacked him for the remarks, Yang continued to repeat the claim at campaign events and press conferences, going so far as to tell a radio host that the city’s homeless population would scare tourists away: “And then they don’t come back, and they tell their friends, ‘Don’t go to New York City.’”

“When it was about recovery and we were living in a Zoom-land, where folks were not vaccinated and we had no idea when or how we were going to open again, people were yearning for someone who would bring hope and optimism. And we were out there campaigning when no one else was,” Chris Coffey, Yang’s co-campaign manager, said in an interview on Wednesday.

With the campaign slogan “hope is on the way,” Yang exuberantly floated through the city, cheerleading its comeback. He made a show of buying movie tickets for himself and his wife when theaters reopened, held a press conference with the founder of TurboVax and cut a TV ad riding Brooklyn’s famous Cyclone rollercoaster.

While his style invited criticism from some of his more seasoned competitors — City Comptroller Scott Stringer often admonished him for substance-free proposals — all signs indicated voters were interested.

But as the tenor of the race shifted, Yang — whose lack of ideological consistency led his own consultant to call him an “empty vessel” — struggled to come up with a new game plan.

Coffey said the campaign team, itself an ideological polylith, considered ways to pivot.

Crime seemed like a natural second chapter, given the spike in gun violence, but Adams was occupying that space. Yang did not want to push a police reform message like attorney Maya Wiley, who came in second place Tuesday night, particularly since the Democratic electorate seemed to want a strong NYPD.

So he tried to return to his political roots and double down on his plans for cash relief, but it didn’t seem to stick. A recent press conference with celebrity supporter John Leguizamo to tout his scaled-back version of Universal Basic Income garnered little attention, Coffey said. So did an announcement about speeding up construction of a stalled water tunnel.

In the closing weekend of the campaign, Yang formed an alliance with rival Kathryn Garcia and the two stumped together — a common tactic in ranked-choice elections. Yang urged his supporters to rank her second; she didn’t return the favor.

In the end, the candidate whose kidney stone received national coverage was relegated to riding in Garcia’s campaign van during the final stretch of the race. “He needed a way from Flushing to here,” Garcia joked that day as Yang chuckled awkwardly next to her.

“They kind of just pinballed from hype houses to casinos to UBI to the People’s Bank to an ending jag on mentally ill homeless people. It was hard to find a throughline,” Rosen said, ticking off a list of some of Yang’s proposals. “And I think in that kind of context, as voters tuned into the other candidates, people who had initially been interested by the flash and the dazzle went elsewhere.”