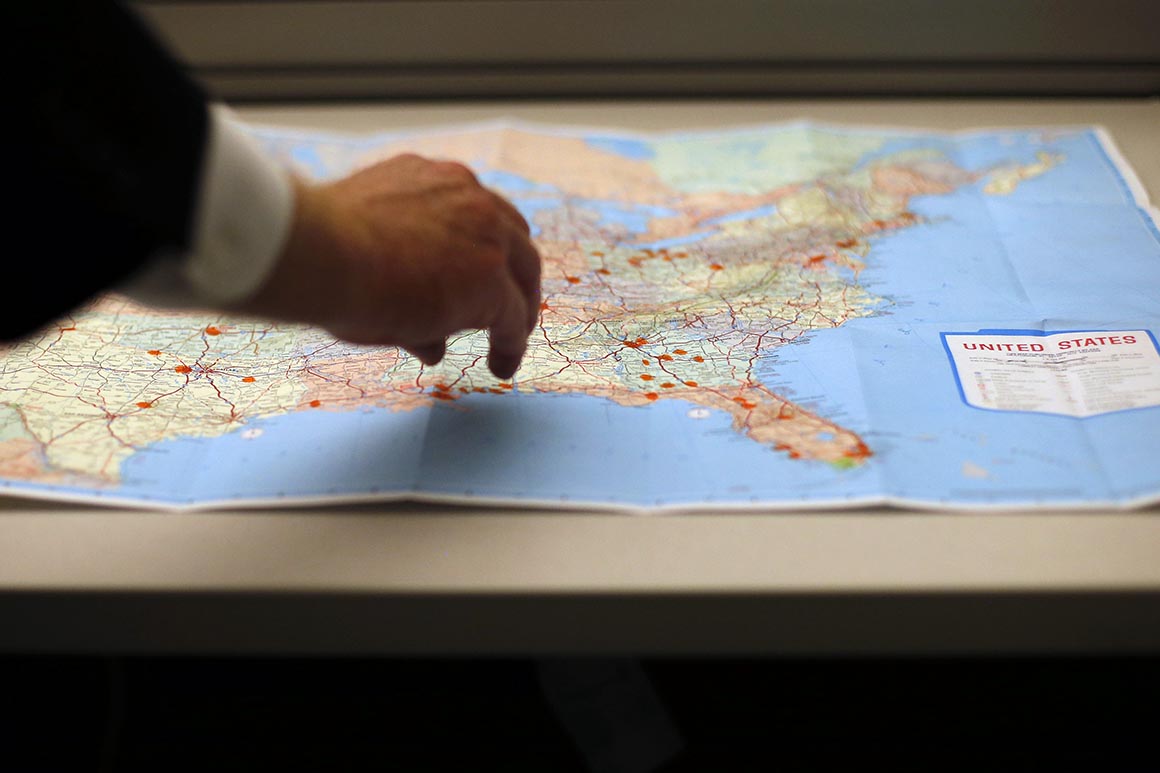 Oregon Democrats had finally secured total control of redistricting for the first time in decades.

Then, just months before they were set to draw new maps, they gave it away.

In a surprise that left Democrats from Salem to Washington baffled and angry, the state House speaker handed the GOP an effective veto over the districts in exchange for a pledge to stop stymieing her legislative agenda with delay tactics. The reaction from some of Oregon’s Democratic House delegation was unsparing: “That was like shooting yourself in the head,” Rep. Kurt Schrader told POLITICO. Rep. Peter DeFazio seethed: “It was just an abysmally stupid move on her part.”

Yet what happened this spring in Oregon is just one example, though perhaps the most extreme one, of a larger trend vexing Democratic strategists and lawmakers focused on maximizing the party’s gains in redistricting. In key states over the past decade, Democrats have gained control of state legislatures and governorships that have long been in charge of drawing new maps — only to cede that authority, often to independent commissions tasked with drawing political boundaries free of partisan interference.

Supporters of these initiatives say it’s good governance to bar politicians from drawing districts for themselves and their party. But exasperated Democrats counter that it has left them hamstrung in the battle to hold the House, by diluting or negating their ability to gerrymander in the way Republicans plan to do in many red states. And with the House so closely divided, Democrats will need every last advantage to cling to their majority in 2022.

“We Democrats are cursed with this blindness about good government,” said Rep. Gerry Connolly of Virginia, a Democratic state that will nonetheless see its congressional map drawn by a newly created independent commission.

“In rabid partisan states that are controlled by Republicans, they’re carving up left and right. And we’re kind of unilaterally disarming,” Connelly conceded, before adding: “But having said that, I still come down on the side of reforming this process because it’s got to start somewhere.”

Only a handful of states had redistricting commissions a decade ago, but the number has grown since then thanks in large part to a campaign from national Democrats, including former Attorney General Eric Holder, to increase voter awareness of gerrymandering — casting it mostly as a Republican abomination, despite the practice’s bipartisan history.

Outside of Oregon, Democrats are also nervous about Virginia and Colorado, which will both have new independent commissions after state legislators — and the voters — passed amendments creating them. Together, those three states account for 25 seats in the House.

The saga of Virginia’s redistricting commission, however, has proved to be the most controversial.

National Democrats poured upwards of $10 million into the state in the 2019 elections and painted the capture of the state legislature as crucial to the party’s redistricting fate. They took both chambers, securing total control in Richmond under Democratic Gov. Ralph Northam.

Democratic legislative candidates campaigned on a pledge to back an existing amendment that would create a redistricting commission. But when it came time to vote on it, they balked.

The proposed 16-person commission includes eight state lawmakers, four from each party. At least two Republican legislators must approve a map — giving the GOP de facto veto power — and if the commission deadlocks, the Republican-leaning state Supreme Court steps in.

Most Democrats in the House of Delegates voted against placing the amendment on the ballot. But nine defected and voted with Republicans to pass it, and voters overwhelmingly approved it in November.

“We just don’t seem to have the guts to just go out and go play politics the way Republicans do,” said Ben Tribbett, a Virginia-based Democratic operative.

The stakes are high: Democrats currently represent seven of Virginia’s 11 congressional districts. But two of those are hard-won battleground seats — held by Reps. Abigail Spanberger and Elaine Luria — that they had hoped to shore up under a new map. Also on the wish list: making the districts of GOP Reps. Rob Wittman and Bob Good more competitive.

“I didn’t endorse it. I thought it was ill-conceived,” said Democratic Rep. Donald McEachin, who represents the Richmond area. “By and large, I do think that unless you’re going to have everybody do redistricting commissions, our party is at a disadvantage.”

That’s what House Democrats proposed in their election reform bill, H.R. 1 (117). Yet that legislation, which would mandate independent redistricting commissions, is unlikely to make it through the Senate.

In the meanwhile, few Democrats dispute that they have been much quicker to move toward commissions or power-sharing agreements in states where they have trifecta control over redistricting.

Holder’s group, the National Democratic Redistricting Committee, has framed the shift as a crucial part of the battle for the integrity of American democracy that transcends any immediate political gain because Republicans are using gerrymandering as a form of voter suppression.

“We want fairness, and we put our money where our mouth is,” said Kelly Ward Burton, the group’s president. “We have pushed for fairness in the states where we have control or influence. We’re even doing it at the national level.”

“The Republicans are not,” she added, “because they intend to manipulate the maps to hold on to power.”

Redistricting is a fraught process for Democrats, who remain scarred from their 2010 experience. State legislative and gubernatorial losses left them boxed out of the mapmaking in nearly every major state, and Democratic strongholds like California and Washington already had commissions in place. Republicans were pressing their advantage in states like Texas, while Democrats couldn’t counter.

They vowed to secure more control before the 2020 redistricting — and have. But that has made recent developments all the more frustrating.

Some Oregon Democrats insist the short-term gain, an end to the legislative logjam, was not with the decade-long price of a compromised map. And in an interview last month, DeFazio said state House Speaker Tina Kotek made the decision without consulting members in other parts of the state.

“She is totally Portland-centric, and nothing outside of Multnomah County exists so far as she’s concerned,” DeFazio said, adding: “It’s just inexplicable and arrogant.”

The state, which has four Democrats and one Republican currently in Congress, is gaining a seat. Schrader and DeFazio are the only Democrats who don’t represent a significant part of Portland, the state’s largest city, and their districts have been competitive at times.

In Colorado, a Democratic-led state House joined with a Republican-led state Senate in 2018 to place a redistricting commission proposal on the ballot.

Privately, some Democrats in the state weren’t sold on the idea. But others were eager to preempt an attempt by Colorado Republicans to gather signatures for their own redistricting amendment proposing a commission with parameters more favorable to the GOP.

Ultimately, the amendment passed with few detractors — the legislature voted to place it on the ballot, and the voters also gave it a stamp of approval. Now Colorado’s eight districts will be drawn by a commission.

“I don’t see it that way,” said Rep. Joe Neguse (D-Colo.) when asked if it was a missed opportunity for the party. “It’s good government, and I think that at the end of the day that’s what nonpartisan redistricting is all about.”

There are 17 states where Democrats have control of the legislature and the governor’s mansion — or a legislative supermajority that can override a GOP governor’s veto. Yet all but a half dozen of those have some form of a commission or power share, and another, Delaware, has only one congressional district.

To be sure, Democrats plan to be aggressive in states where there are few restraints. One proposed Illinois map could give Democrats control of 14 of the state’s 17 seats. In Maryland, there’s some Democratic appetite to claim all eight of its districts — taking the current 7-1 Democratic map, one of the nation’s most notable gerrymanders, and pushing things a step further.

In New Mexico and New York, Democrats have given a commission a chance at drawing new maps — but allowed their legislatures to retain the final say. They represent a roadblock for Democrats, but not an insurmountable one; legislators can reject those maps and pass their own.

Still, Republicans have control in places like Texas, Georgia, Florida and North Carolina. And they need only five seats to recapture the House, something they could possibly attain through favorable maps in those states alone.

The NDRC, which will serve as the party’s redistricting legal clearinghouse, said Democrats remain clear-eyed about the challenges that lie ahead.

“We will fight tooth and nail in the states with every tool at our disposal to prevent them from locking in gerrymandered maps,” Ward Burton said of their plans if H.R.1 doesn’t pass. “We will sue them. We fully anticipate being in court. And that will be the battlefront on which we fight for fair maps. We’re ready for that.”