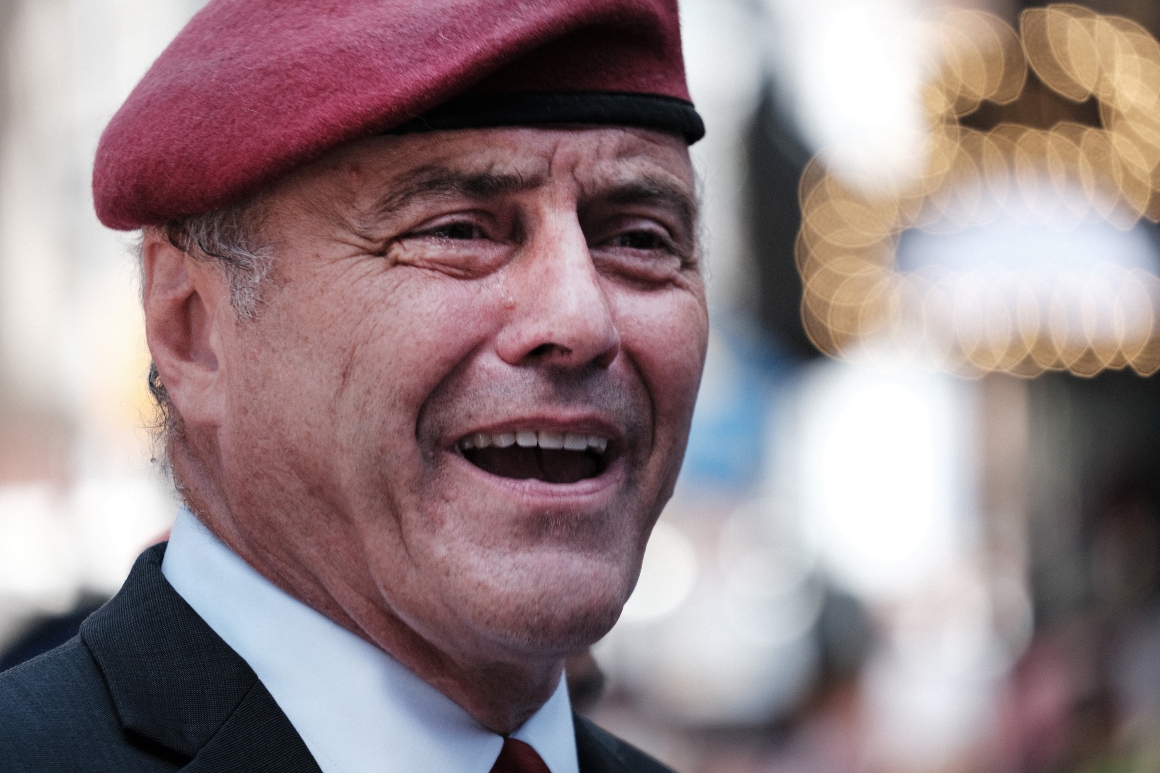 NEW YORK — As many New Yorkers fear the city could slip into the bad old days of subway crimes and gang shootings, one of the more memorable characters from the city’s rough and tumble past has emerged to carry the Republican banner into the general election for mayor.

By most accounts, his chances of victory are slim.

But Curtis Sliwa, who founded the citizen public safety group Guardian Angels in 1979, is used to long odds. Clad in red berets and jackets, the Guardian Angels — trained in conflict resolution, outreach and some martial arts — would ride the subways to protect straphangers from crime the police seemed unable to control.

Forty years later, Sliwa still wears the beret, though it’s more often accompanied with a suit and tie. And his message, after securing the Republican nomination in a primary that got little attention, remains one focused on protecting the public — and no small number of cats — from the wiles of the city streets.

He was always going to be an underdog as the Republican nominee for mayor in overwhelmingly Democratic New York City, where moderate GOP politicians have all but abandoned their chances of reclaiming Gracie Mansion. But Sliwa may have an even tougher job if Eric Adams, a former NYPD cop running on an anti-crime message, secures the Democratic nomination.

The Democrats are waiting for ranked-choice voting tallies to determine their nominee, with Adams leading in first-choice votes. Sliwa took 69 percent of the vote, to 27 percent for rival Republican Fernando Mateo, a Donald Trump-loving advocate for bodega owners and taxi drivers. Under ranked-choice, any candidate who tops 50 percent in first-place ballots automatically wins the nomination.

“I’m the only one who has gone into neighborhoods throughout the five boroughs where the only Republican that the residents have ever seen is Abraham Lincoln on a five-dollar bill,” Sliwa said.

The general showdown between the two candidates would come as New York, like other major cities, reports a massive surge in violent crimes over the past year. A far cry from its darkest days in the 1980s and early 1990s, when murders peaked at more than 2,200 in a single year, many are nonetheless shaken by the near-daily violence that’s broken out in some neighborhoods. Homicides in New York rose nearly 50 percent last year, to 468.

Sliwa, also a longtime radio host, plans to hammer Adams for not being pro-police enough, despite the Democrat’s career as an NYPD captain before entering politics. But he says he has a softer side — and a major part of his platform is animal welfare, calling for no-kill shelters and discussing the 15 rescue cats with whom he and his wife share a studio apartment on the Upper West Side.

The Republican is running on a plan to add 3,000 more police officers, bringing the size of the force to 38,000, financed by a dedicated property tax on entities like Madison Square Garden, and Columbia and New York Universities, which are now mostly exempt.

He is cuing up a series of attacks on Adams, including the Brooklyn borough president’s comments telling transplants to the city to “go back to Iowa,” his assertion that a ranked choice voting alliance between two primary opponents was aimed at suppressing the Black vote, and past comments that he would carry a gun as mayor and go armed to church.

Adams says Sliwa is a one-trick pony and isn’t up for the complexities of the job.

“We need to do more than be safe. He cannot ride to City Hall based on just that he patrolled the subway system. We have to grow our economy. We need to deal with the educational system. We need to have a real health care system,” Adams said last week on NY1. “This is the right time for my kind of leadership, to really cycle out of Covid-19 and finally ending inequalities in this city. That is something that Curtis is not aware of how to do.”

Sliwa has been a New York City character going back decades, when his subway safety patrols made headlines in the 1980s as the city was wracked by crime. He has never lost his flare for publicity, from a stick ball game for mayoral candidates in 2013 to a recent mask burning ceremony marking the lifting of Covid-19 restrictions.

Sliwa has also courted his share of controversy over the years. He acknowledged faking a handful of crimes to which the Guardian Angels responded. Lewd sexual remarks about the former City Council speaker got him suspended from a commentator’s post at local news station NY1. An ugly public divorce battle centered on his relationship with now-Queens District Attorney Melinda Katz, with whom he has two children. A video recently resurfaced in which he made disparaging remarks about ultra-Orthodox Jewish communities in the Hudson Valley.

Despite the city’s liberal reputation — and Democrats’ now 7-to-1 voter registration advantage — the long odds for a Republican mayoral nominee are a more recent phenomenon.

The city elected Republicans Rudy Giuliani and Mike Bloomberg — who later became an independent and then a Democrat — to a combined five terms.

But the business-friendly, moderate Republicans who sent GOP mayors to City Hall for two decades are no longer the face of the party.

Joe Lhota, the Republican nominee in 2013 against current mayor Bill de Blasio, left the party and became a Democrat because he could not abide Trump. He supported Kathryn Garcia, a fellow technocrat and the former city sanitation commissioner, for mayor in the Democratic primary.

Republican and Wall Street donors gave big money to influence the Democratic race. An investor-funded effort urged Republicans to change parties to have a voice in the election. And even the conservative New York Post did not endorse in the Republican primary, instead going all in for Adams on the Democratic side.

The Republican primary between Sliwa and Mateo nonetheless turned nasty. “I have enough dirt to cover your body 18 feet over,” Mateo said at one debate.

The GOP county parties in the five boroughs were split between the two men. Bronx Republican chair Mike Rendino, who supported Mateo, said he was “disappointed in the results of the primary, but hopeful Curtis will show Bronx Republicans his plans to expand the party base and not just keep a few safe seats on Staten Island.”

Billionaire John Catsimatidis, who ran for the GOP nomination for mayor in 2013 and was courted by Republican leaders to run again this year, supported Sliwa in the Republican primary. But he said he has nothing against Adams and expects to stay neutral in the general election if Adams is the nominee.

“My advice to Curtis was tell people how great of a job you’re going to do and don’t criticize anybody. And I’m certainly not going to criticize Eric or Curtis,” he said.

“I think the Democrats have a tremendous edge,” Catsimatidis said, but added, “Curtis is speaking very well. Curtis is smarter than people give him credit [for], because he’s very smart. And Curtis has a heart. He talks about dogs and cats, which people love in New York City. And anything could happen.”

The primary fight further divided an already diminished local GOP. “This was an ugly primary with a lot of bad blood. It’s going to take some time for the party to get over and will divide us for years to come,” said a party source.

Sliwa, who formerly led New York’s Reform Party, registered as a Republican last year. Mateo attacked him for not being a true Republican, but Sliwa doesn’t see it as a negative.

“He was partially right. I didn’t argue. I’m a populist,” he said.

Sliwa has gathered enough signatures to get an Independent Party line on the ballot in November with his name, so that New Yorkers loathe to vote for a Republican can cast ballots for him there.

He said his campaign will aim to introduce voters to another side of him, highlighting his love for animals and his group’s work to care for homeless and mentally ill New Yorkers on the streets and subways

“They know that Curtis is going to crack down on crime. They know that,” said Sliwa who, like Adams, often speaks in the third person.

“They have no idea the other side — the compassion,” he said. “A society that is not compassionate for animals [and] emotionally disturbed homeless people is a society that is uncaring, that has lost all touch with their human sentimentality. And I never have.”

Besides beefing up law enforcement, one of his main campaign platforms is to create no-kill animal shelters in the city, rather than euthanizing stray dogs and cats that are not quickly adopted.

“When I’ve been out there campaigning, whether they support AOC, DSA, whether they’re hard core Trumpers, they supported Biden, they’re apolitical — my position on no-kill shelters has resonated,” he said, referring to Rep. Alexandria Ocasio-Cortez (D-N.Y.) and the Democratic Socialists of America.

Staten Island Republican City Council Member Joe Borelli said Sliwa will be a “great candidate” and would give Adams, should he prevail on the Democratic side, a run for his money.

“Law and order seems to be the driving issue of the day,” he said. “All New York voters know which side of the aisle represents rational policing policy and a return to safer streets.”

But Richard Flanagan, a political science professor at The College of Staten Island, said the focus on law and order will not be enough to improve the Republican’s chances.

“The city is a more liberal place. The white ethnic bloc that Giuliani constructed in ‘89 and in ‘93 isn’t there anymore. They’re gone. And what’s left are a variety of liberal whites and minority voters who just aren’t going to pull the lever for the GOP, especially after the Trump years,” he said.

“It would be hard to overestimate the magnitude of their underdog-edness,” Flanagan said. “I think it’s just a sideshow.”