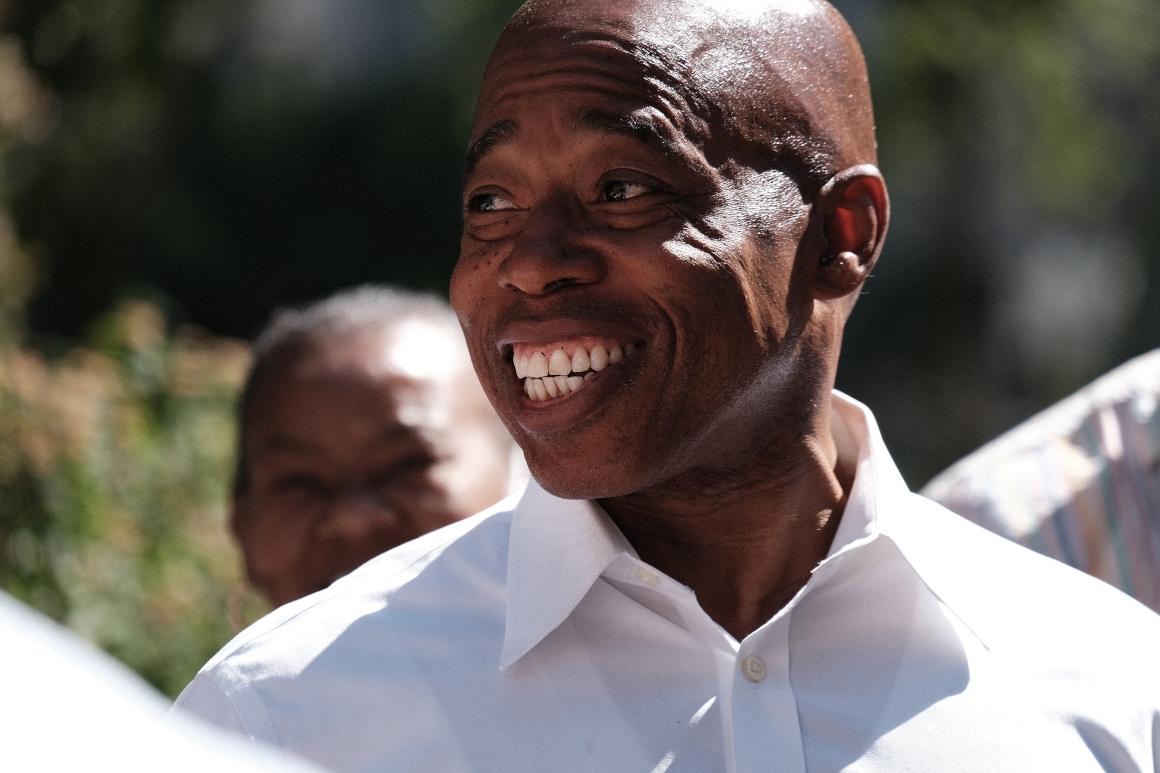 NEW YORK — At most other times in New York City history, the Democratic nominee for mayor could spend this post-primary period basking in the glow of victory and an almost guaranteed path to City Hall.

But this is like no other time in city history and the next few weeks will be a complicated and potentially messy time for mayoral politics.

“This is new territory for all of us,” leading candidate Eric Adams acknowledged Friday.

But unlike other such contests, this one took place as the city was still emerging from the Covid-19 pandemic and more than 100,000 absentee ballots have yet to be counted. With about 800,000 ballots cast on election night, that could potentially sway the outcome, and runners-up Maya Wiley and Kathryn Garcia are arguing the race is far from over.

The ranked-choice tallies won’t be run until this Tuesday, and that means the margins between Adams, Wiley and Garcia could get even closer.

“We’re all acting as if it’s done,” Garcia pollster Adam Rosenblatt said. “The most important piece is still missing.”

That leaves Adams, the Brooklyn borough president, in an electoral no-man’s land: preparing to become the next mayor after what many see as a pro-forma general election against Republican candidate Curtis Sliwa, while also leaving open the possibility he may not be the nominee.

For the next few weeks, Adams will be simultaneously counting votes in the race he just ran, shifting his campaign to general election mode and preparing to hire a new administration. If he becomes mayor, replacing the term-limited Bill de Blasio, Adams will be immediately tasked with quieting a surge in violence, getting 1 million public school students caught up from more than a year of remote learning and trying to get the city‘s economy back on its feet after the devastation wrought by Covid-19.

He made a push Friday to start the transition as soon as possible. Typically, a mayor-elect might wait until the general election to start planning his or her administration. Adams argued that, because of the weight of the issues facing the next mayor — and with the primary now in June instead of September — the new administration should start meeting with the old administration as soon as the Democratic nominee emerges.

“We need to engage in a conversation. We can’t say, ‘Let’s start from scratch on Jan. 1.’ That’s unfair to New Yorkers,” Adams said Friday, while acknowledging other candidates should be part of that conversation with de Blasio. “I’m going to encourage him to make his commissioners available to whomever would like to sit down with them and get a real briefing on what is happening in our agencies.”

Adams‘ campaign says the candidate is trying to prepare for the litany of crises that may be waiting on the next mayor’s desk.

“The responsible thing to do for Eric now is to think ahead to the general election and how he would govern as mayor,” Adams adviser Evan Thies said. “While awaiting the process and acknowledging it’s not over, he’s still making sure he is prepared to hit the ground running.”

Adams hit the streets the day after Election Day saying his commanding lead translated into a mandate for his campaign message; one that focused heavily on reducing gun violence in low-income communities of color, where the surge in shootings has been the worst.

Adams, a Black former police captain who was beaten by cops as a teenager in Queens, was especially well suited to deliver that message while also promising to curb aggressive and abusive policing. Opponent Andrew Yang, an early front-runner who ended up conceding on primary night, tried to take a similar tough-on-crime approach but was unable to break through in the way Adams did.

Adams is now making the case that his moderate message is one other Democrats across the country should embrace before 2022.

The strident message, however, may be a little premature.

Wiley, former counsel to de Blasio counsel, and Garcia, the former sanitation commissioner, are publicly arguing they might prevail after the ranked-choice tallies are run Tuesday and the absentee ballots are counted in July.

Wiley, who is Black, ran as a progressive who would be the first woman to become mayor. She promised some funding cuts to the police department and more investment in mental health and supportive housing, avoiding the same aggressive messaging about a crime wave that needs to be stopped. Wiley, currently in second place, is about 75,000 votes behind Adams and is sure to pick up more after the ranked-choice votes are counted Tuesday. So are Adams and Garcia.

“We have every reason to believe we can win this race,” Wiley said on Wednesday. “It is not over.”

The Garcia team released a memo Thursday outlining why the former city officials may actually pull ahead of Adams in first-place ballots, and ultimately prevail in ranked-choice tallies when all is said and done.

“In a lot of the districts where [absentee] ballots have been returned — these are vote-rich areas; these are areas where Kathryn is winning handily,” Rosenblatt said in an interview. “There are certainly Manhattan districts. There are Queens and Brooklyn districts in the mix as well.”

The city Board of Elections won’t count the absentees until July. But close to 200,000 absentee ballots were requested and as many as 111,000 had been returned as of Friday.

Garcia ran as a moderate, like Adams, promising to bolster police presence and have a friendlier relationship with the business community than de Blasio, her former boss. Garcia, who is white, also could be the first woman elected mayor in New York.

She is the only candidate still in contention to run a ranked-choice strategy in the final days of her campaign, making a play for the second- and third-place ballots that will be counted Tuesday. Her team-up with Yang drew recriminations from Adams and his supporters that the pair was trying to disenfranchise Black and Latino voters, even though their cooperative approach is one of the intended goals of ranked-choice voting.

Adams has since dropped that rhetoric and said multiple times he will support whichever Democratic candidate emerges when the numbers are tallied. But should Wiley or Garcia pull ahead through a combination of ranked-choice tallies and absentee ballots, there will almost certainly be a fight.

“I don’t see him going quietly into the night,” said Christina Greer, a political science professor at Fordham University who hosts a podcast about New York. “Not after the victory laps he’s taken these last few days.“

“There’s a certain type of New Yorker who’s had a permanent seat at the table. That New Yorker didn’t vote for Eric Adams,” Greer said. “If you look at his map, it’s largely people who are ignored in these larger political discussions.”

“Eric Adams has been around here since I’ve been around here,” said Ken Carlton, 64, who voted for Adams in Brooklyn’s Crown Heights on Election Day. The former corrections worker, who now works for the U.S. Postal Service, ranked crime as his number one issue.

“He seems genuine,” Carlton said of Adams. “He can identify with some of the things the neighborhood is going through.”

Carlton also said he didn’t care for the new ranked-choice system: “It should be you elect one, that’s it.”

Greer echoed concerns that have been bubbling up in political conversations around the city since this past week, should Garcia prevail and those communities where Adams prevailed are left in the cold.

“The visual looks really bad that Eric Adams gets 100,000 more votes than Garcia“ on election night, she said, “and this white woman rolls into Gracie Mansion.“

Janaki Chadha and Sally Goldenberg contributed to this report.