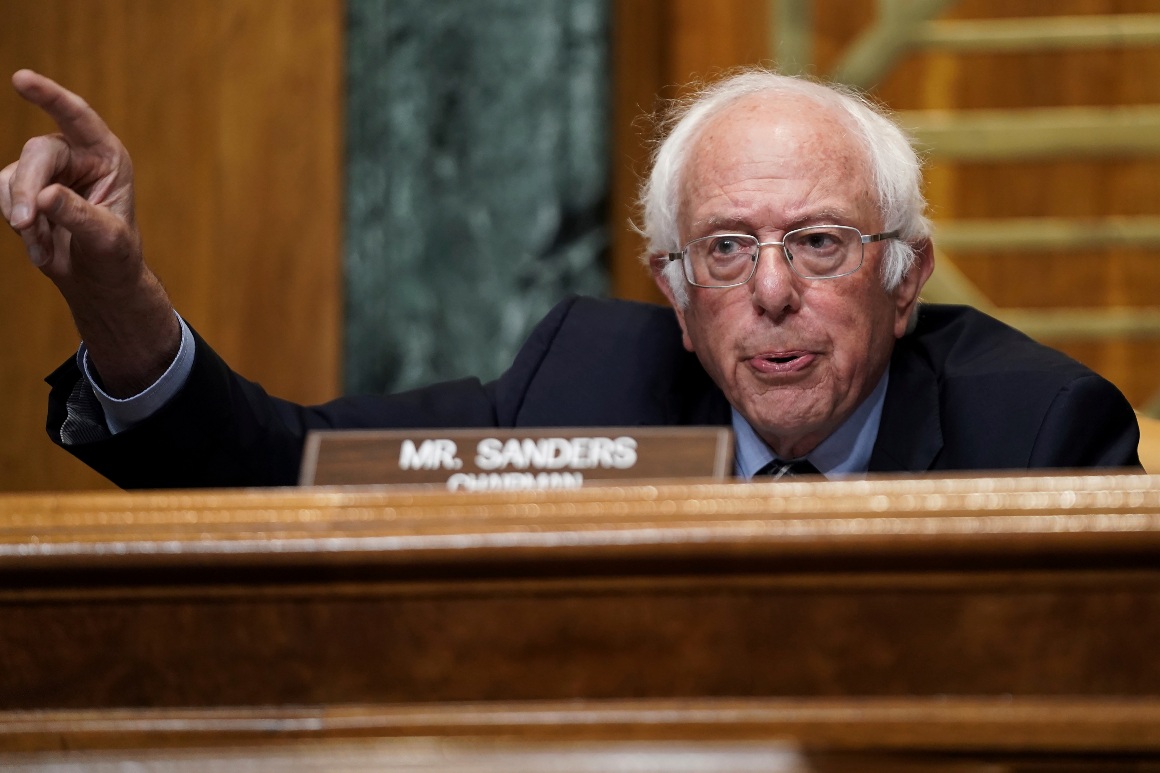 Influential progressive lawmakers are teeing off on the Senate’s bipartisan infrastructure negotiations, threatening defections that could derail the prospects for a deal on roads and bridges given Democrats’ thin majorities.

Senate Budget Chair Bernie Sanders (I-Vt.) announced his opposition on Monday, and other liberals are threatening to join him. Sens. Jeff Merkley (D-Ore.) and Ed Markey (D-Mass.) are vowing to oppose any infrastructure accord that lacks major policies to tackle climate change. Rep. Pramila Jayapal (D-Wash.), who leads the Congressional Progressive Caucus, says her members will oppose a deal unless Democrats also commit to a broader, separate bill.

Others are taking an even harder tack.

“I can’t support any infrastructure package that does not include child care, clean energy and requiring the rich and powerful to pay a fair share to get this done,” said Sen. Elizabeth Warren (D-Mass.). “It has to be one deal and not two deals.”

Five Senate Democrats, including moderates who have balked at a party-line infrastructure bill, are negotiating with an equal number of Republicans on a package of spending on roads and bridges while trying to sell it to their respective sides of the aisle. But the burgeoning resistance among progressives means that President Joe Biden’s signature domestic priority could wither on the vine while bipartisan talks stretch on — since every Democratic vote that jumps ship requires his party to lock in a corresponding Republican.

Though centrists have dominated the last few weeks of infrastructure discussions, progressive members are flexing their muscles and showing that they are eager to chart their party’s agenda with Democrats in control of Washington for the first time in a decade. Senate Majority Leader Chuck Schumer set out an aggressive timetable on Tuesday, promising to try and pass both a budget resolution setting up a party-line spending bill and a bipartisan infrastructure bill in July, hoping to satisfy his diverse coalition of 50 Democrats.

“Many people, maybe everybody in our caucus, believes it’s a good start but it doesn’t do enough,” Schumer said of the bipartisan approach.

With Warren and Sanders opposed to the bipartisan approach, an even larger number of left-leaning members are criticizing an emerging bipartisan Senate agreement to spend nearly $1 trillion, $579 billion of it new spending, on physical infrastructure.

Senate Republican negotiators presented an outline of the plan and its pay-fors during their caucus lunch Tuesday. According to attendees, $315 billion comes from public-private partnerships and $120 billion would come from unspent coronavirus relief money. The plan also would include gas tax indexing — something Democrats say they will reject. A source close to the negotiations said the pay-fors are fluid.

Sen. Kirsten Gillibrand (D-N.Y.) said she has “grave concerns” about moving ahead without a fully negotiated Democratic-only package. Senate Banking Committee Chair Sherrod Brown (D-Ohio), who oversees transit policy on transportation bills, said he looks at anything with GOP support “with skepticism that Mitch McConnell’s earned.”

“McConnell has repeatedly said he wants Biden to fail. And you know the Republican conference doesn’t do anything that McConnell doesn’t bless,” Brown said in an interview on Tuesday. “There’s no genuineness about paying for it … we’re not going to do a gas tax, and they’re not going to ask people that got tax cuts four years ago to ante up anything.”

Democrats working on the bipartisan talks are growing privately frustrated with the pile on.

“It’s funny how many lectures we hear from progressives about how Republicans will never work with Democrats,” said a Democratic aide close to the centrist group. “Since it’s Democrats, not Republicans, trying to sink a bipartisan infrastructure deal that was requested by President Biden.”

McConnell said he would keep an open mind about the infrastructure negotiations but was noncommittal about his support.

Sen. Richard Blumenthal (D-Conn.) said he would only consider the bipartisan proposal with a commitment to immediately doing a more expansive bill and called the current bipartisan plan “pathetically paltry.” Markey and Merkley both signaled opposition to continuing to negotiate with Republicans and said Congress needs to work out a climate and infrastructure package by early August.

“It’s time for us to go our own way,” Markey said of negotiations with Republicans. “We need to move forward with 50 Democratic votes.”

They said their strategy to get an “ironclad” commitment to a climate bill that can become law is supported by Schumer. He’s expected to push Budget Committee Democrats on Wednesday to take an aggressive strategy on climate change, according to a senior Democratic aide.

White House counselor Steve Ricchetti told House Democrats in their Tuesday caucus meeting that “we certainly have a foundation to build on top of our jobs plan in its really complete or more complete form, and we’ll see where we’re going to go after a week or 10 days more dialogue and negotiation,” according to a partial recording of the call that POLITICO listened to. Ricchetti was referring to the strategy of two tracks as the “foundation” to get Biden’s infrastructure deal passed: a bipartisan deal and reconciliation.

Some Democrats in the room interpreted that as a time frame to produce a deal, but White House spokesperson Andrew Bates said Ricchetti “did not set a deadline or cutoff.”

Yet on the other side of the Capitol, an even bigger number of Democrats are skeptical or downright hostile to what the Senate negotiators are trying to pull off.

Top of mind right now is whether Sens. Kyrsten Sinema (D-Ariz.) and Joe Manchin (D-W.Va.) will offer a definite promise to support the rest of Biden’s agenda in exchange for Democratic support for the aisle-crossing agreement. Senate Majority Whip Dick Durbin said progressives would “rather do one large bill” as opposed to splitting up the legislation into pieces focused on physical and social infrastructure, “but practically we are a razor-thin majority thanks to the vice president. So, we have to deal with reality.”

The math on the House side is just as tricky. Speaker Nancy Pelosi and her leadership team can afford to lose no more than four Democrats on a party-line bill. But many Democrats are already predicting that any bipartisan deal — without a promise from Biden to pursue a Democratic-only add-on — would lose dozens of their liberal members.

The Congressional Progressive Caucus, which has nearly 100 members, has a long list of must-have priorities in the next package, including climate, housing and immigration. And few Democrats — or Republicans — believe that there would be enough in the House GOP willing to help Biden or Pelosi carry it over the finish line with such a tight majority and the midterms just 16 months away.