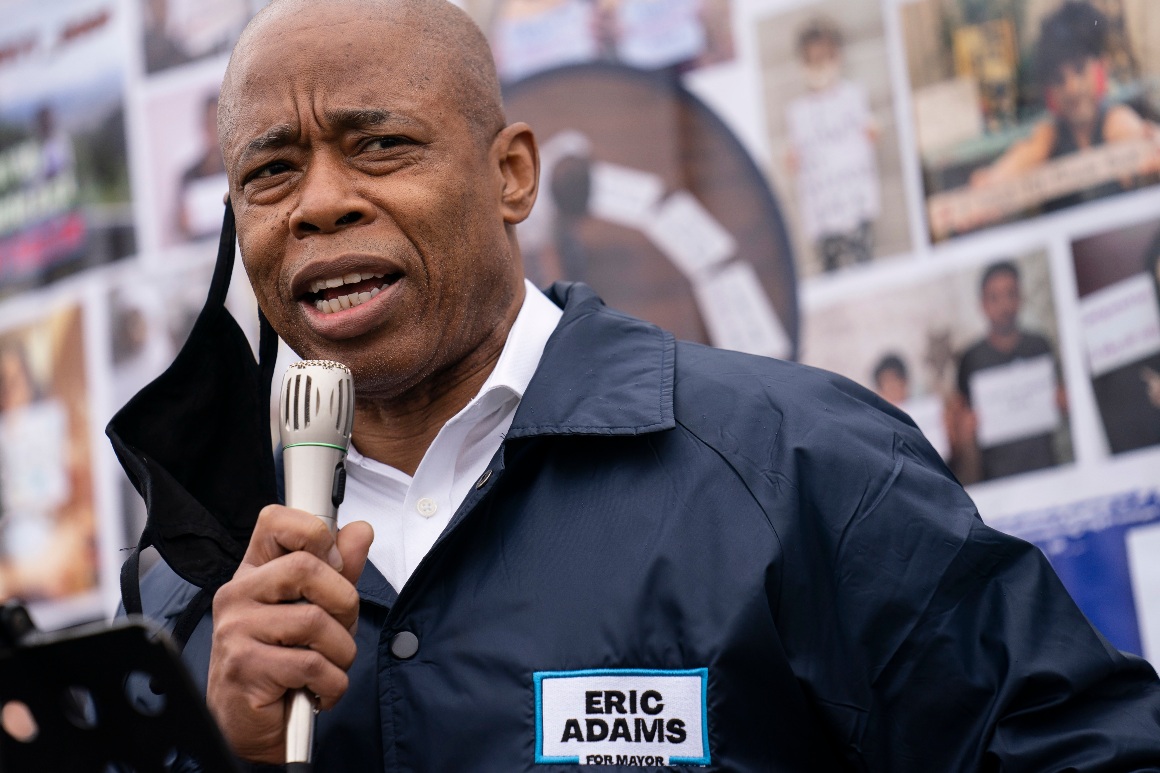 NEW YORK — Eric Adams announced he was living in Brooklyn Borough Hall to combat Covid last March. Now it seems he may have never left.

The New York City mayoral hopeful has been staying overnight and keeping late-night and early-morning hours in the government building where he and his staff work, according to POLITICO’s recent observations and those from several rival campaigns. When he is not laying his head in the taxpayer-owned building, the borough president has provided conflicting information on official documents about where he resides.

Adams is leading the pack of Democratic candidates to become New York City’s next mayor, riding a wave of concern about crime that is bolstered by his 22-year career with the New York City Police Department. Now as borough president, an examination of his government and political activity reveals blurred lines between the two roles, as well as a confusing account of his residential status for someone seeking one of the most visible elected offices in the country.

“I own a small property so I am real estate also,” Adams said at a mayoral forum in October, Zooming into the LGBT-focused Jim Owles Liberal Democratic Club from a dark, nondescript location featuring what Gay City News described as “a backdrop of rainbow stripes.”

Indeed, the borough president owns a three-unit rowhouse in Bedford-Stuyvesant, Brooklyn, and a co-op in Fort Lee, N.J., that he bought with his partner, according to property records.

He also purchased a co-op in the Brooklyn neighborhood of Prospect Heights with someone in 1992, and continues to list that property on government records, even though he says he hasn’t lived there in almost 10 years. He included that address on registration forms for his current mayoral and 2017 borough president campaigns. His staff also added his Bed-Stuy property to the 2021 campaign form.

Adams gave a political contribution to Staten Island Assemblymember Charles Fall last summer from the Prospect Place address, according to state records, even though someone else was living in the unit at the time.

Campaign adviser Evan Thies said Adams signed his share of that unit over to the other owner and no longer has a stake in the property. The campaign will be amending documents that include the Prospect Place address, he added.

He said Adams has lived on Lafayette Avenue in Bed-Stuy for nearly a decade and provided several utility bills to corroborate that. Yet other official records and a recent media report muddle that assertion.

For starters, Adams is registered to vote on the first floor of 936 Lafayette Ave. yet a tenant who has lived there for years is listed under the same unit in multiple documents obtained by POLITICO. And last month, the publication City Limits reported that most of Adams’ neighbors did not know he lived on their block, or that he is running for mayor.

To further confuse matters, Adams’ voter registration form shows a change of address in January — the day after a Daily News article questioned why the Bed-Stuy property was not registered with the city’s housing agency, as required for multifamily units. Thies said the change was a clerical update to a previous address, and that Adams has been registered to vote in Bed-Stuy since 2017. He added that the property has been registered with the city, though the website for the housing agency still indicates it has not.

He also said Adams lives in the basement apartment but rarely sleeps there due to his hectic schedule as an elected official and a mayoral candidate. The confusion over who occupies the first floor likely stems from a recent renovation that led to a change in the unit numbers, Thies said.

Adams has long had tenants in his Lafayette Avenue home, but failed to list rental income on his tax returns in 2017, 2018 and 2019, POLITICO previously reported. Thies said he amended the returns but has yet to provide a copy of the change.

Before Covid-19, Adams would periodically stay overnight in Fort Lee, according to Thies. But once he took up residence in Borough Hall as the pandemic hit New York City, he stopped crossing state lines to visit his partner. After the virus subsided, he stayed at the New Jersey unit a few times, Thies said, but has not been there in months on account of his campaign schedule. Instead, he and his partner meet in the city, he added.

And while most mayoral candidates have become identified with their Zoom settings — Ray McGuire’s fancy lighting; Maya Wiley’s disruptive housecats — Adams has tuned into virtual events from at least 19 backgrounds, including a moving car, and debated his opponents from a nondescript cubicle last month, according to POLITICO’s observations.

If Adams wins the election, the next occupant of City Hall will keep decidedly different hours than current Mayor Bill de Blasio who, prior to the pandemic, was known to arrive at the office mid-morning after workouts at the Park Slope Y.

Over the last two weeks, the former police captain has appeared to spend many of his waking — and most of his sleeping — hours at Borough Hall.

Unlike every other candidate in the race, Adams’ campaign has not regularly released his daily public schedule. POLITICO and sources on rival campaigns observed him arriving at the government building close to midnight four nights in a row last week and several nights the week prior, including over Memorial Day weekend. On several of those occasions, Adams did not leave until the following morning and other people who did not appear to be maintenance staffers were spotted entering the building in the middle of the night.

In contrast to last year — when Adams slept at Borough Hall for months on account of his packed pandemic itinerary — a review of his 2021 schedule obtained through a Freedom of Information request shows little official work. During the second week in April, for example, Adams attended only three events and had a smattering of calls with staff. Most of each day was reserved for non-governmental work and the details were redacted. Vague notations about Adams’ plans to be outside Brooklyn correspond to his active campaign pace.

His team says Adams is simply working hard on behalf of Brooklyn residents after long days on the campaign trail.

“He has a lot of responsibilities and official business he has to do by law,” Thies said on Tuesday. “He has to personally sign off on every FOIL request; he has to sign off on every land use action, every capital budget allotment. He gets in at Borough Hall at like 1, 2 a.m. and goes to his desk where there’s a stack of stuff waiting for him and he goes through it because that’s what he’s paid to do.”

Thies described several locations — including a sparse cubicle from which he called into the debate and a FOX interview and a more brightly-lit office where he staged an MSNBC spot — as space within MetroTech, an expansive office campus near Borough Hall.

That also happens to be where Frank Carone, attorney to the Brooklyn Democratic Party that is unofficially supporting Adams’ campaign, has office space.

Adams’ expenditures — which were last updated by the Campaign Finance Board on May 21 — show only 13 payments for office rent totalling $23,612 over the course of the multi-year campaign. None of those mention MetroTech — a discrepancy Thies explained by saying the rent may have been bundled into a petitioning payment to Carone’s law firm, Abrams Fensterman.

Carone, meanwhile, represents clients with business before the city, including a grocery store firm that lobbied Adams’ office in 2018 over real estate issues, according to a recent report in THE CITY.

In addition to Brooklyn Borough Hall, Adams has access to a city-owned Toyota SUV that he has recently used to get to campaign events. POLITICO spotted him arriving at a press conference in Long Island City on May 29 and an event in Flushing the following day in the government car.

And while last month he conducted an interview from the passenger seat of a moving car that appears to be a rental from Bical Auto Mall, he has also Zoomed into at least one forum from what looks like the inside of a city vehicle.

“He has never used Borough Hall or the Borough Hall car for anything other than government business,” Thies said. “The car drops him off at events and if he is exclusively traveling for campaign related things and doing campaign work he’s using a campaign car.”

City Conflict of Interest Board rules state that elected officials are allowed to use their government cars while heading to personal events, though the practice is often criticized by government reform groups.

Adams has often criticized Andrew Yang for swapping his Manhattan apartment for his Hudson Valley second home during the height of the pandemic. Yet Adams’ account of his own whereabouts over the years is far from clear.

At a recent campaign event Adams, who often speaks in the third person, said: “You never have to say in the history of this city: Where were you Eric?”

Amanda Eisenberg and Erin Durkin contributed to this report.