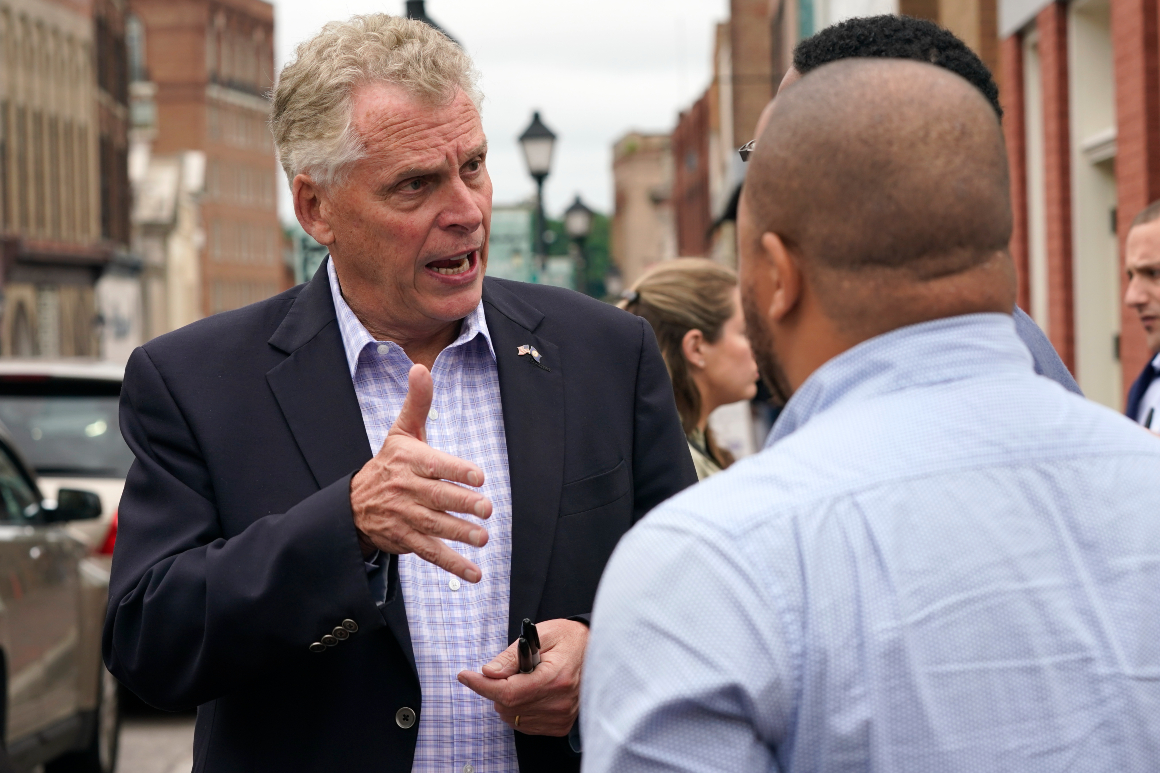 McAuliffe had been the wire-to-wire favorite in the Democratic gubernatorial primary since entering the race last December, significantly outraising his four other opponents and staking out a sizable lead in public polling throughout the race. His victory sets up a matchup with Glenn Youngkin, a former Carlyle Group chief executive who won the Republican nomination in a party convention about a month ago.

The November election will be the first major election during President Joe Biden’s tenure in the White House — and a measure of how damaging now-former President Donald Trump was to the state Republican Party here, which had been ransacked during Trump’s four years in office.

McAuliffe’s blowout victory capped off a disappointing primary for some progressives in the state, who were eager to nominate a Black woman from the field. Both former state Del. Jennifer Carroll Foy and state Sen. Jennifer McClellan were unable to break out from the rest of the pack, which also included current Lt. Gov. Justin Fairfax and Del. Lee Carter.

Some Democrats in the state fretted about apparent low turnout in the primary — “there’s more cicadas than there are voters,” one aide on a gubernatorial campaign quipped — although that comes with the caveat that this was the first election under new state laws that provided for a month and a half of early voting.

For his part, McAuliffe projected confidence in the closing days of the primary, barnstorming the state with supporters and posting videos of him dancing to Twitter. He had already turned much of his attention toward Youngkin, calling him an “extremist” and focusing on him in fundraising emails to supporters (two recent subject lines: “Everyone is watching” and “We’re already behind”).

Democrats are eager to tie Youngkin, the relatively little-known former private equity exec, to Trump, who quickly endorsed Youngkin after a bruising nominating process that saw intensive Republicans fighting over both the process itself and the field of candidates.

Virginia has long been a political bellwether in new presidential administrations, frequently swinging against the party that won the previous year. But during Trump’s tenure in the White House, the state swiftly abandoned Republicans. It started when now-Gov. Ralph Northam crushed Republican Ed Gillespie in the 2017 gubernatorial contest, well overperforming expectations at the time, and never really letting up.

In the 2018 midterms, Democrats unseated a trio of GOP members of Congress, while Democratic Sen. Tim Kaine crushed a Trump-aligned challenger. And Democrats flipped the state legislature in 2019, giving them complete control of Richmond for the first time in decades.

Republicans have argued that 2021 will be different, banking on a fired-up base in rural parts of the state, and Youngkin being able to claw back suburban support that skittered away from the party over the last four years. Youngkin has also poured about $12 million of his personal fortune into his campaign thus far, giving him resources to compete with the famously prodigious fundraiser in McAuliffe, should he win.

Down the ballot in Tuesday’s Democratic primary, state Attorney General Mark Herring was facing a challenge from state Del. Jay Jones, two years after a blackface scandal scuttled Herring’s ambitions to run for governor and could have ended his political career.

The lieutenant governor’s primary has been a messy field with no clear frontrunner. The seat is open, with Fairfax — who has denied allegations of sexual assault that have derailed his gubernatorial campaign — seeking higher office.

Further up the East Coast, New Jersey Republicans are picking their nominee to face Democratic Gov. Phil Murphy, who faced only token write-in opposition in his own primary.

Businessman Jack Ciattarelli is the presumed frontrunner in a Trumpified GOP primary that sees Ciattarelli — who has sought to create some distance with Trump, though he has not disavowed him in a state the former president lost resoundingly — face off against two avowed Trump supporters in perennial candidate Hirsh Singh and Baptist minister Phil Rizzo.

A recent poll from the Eagleton Center for Public Interest Polling at Rutgers University found Murphy leading Ciattarelli, 52 percent to 26 percent, in a theoretical head-to-head.