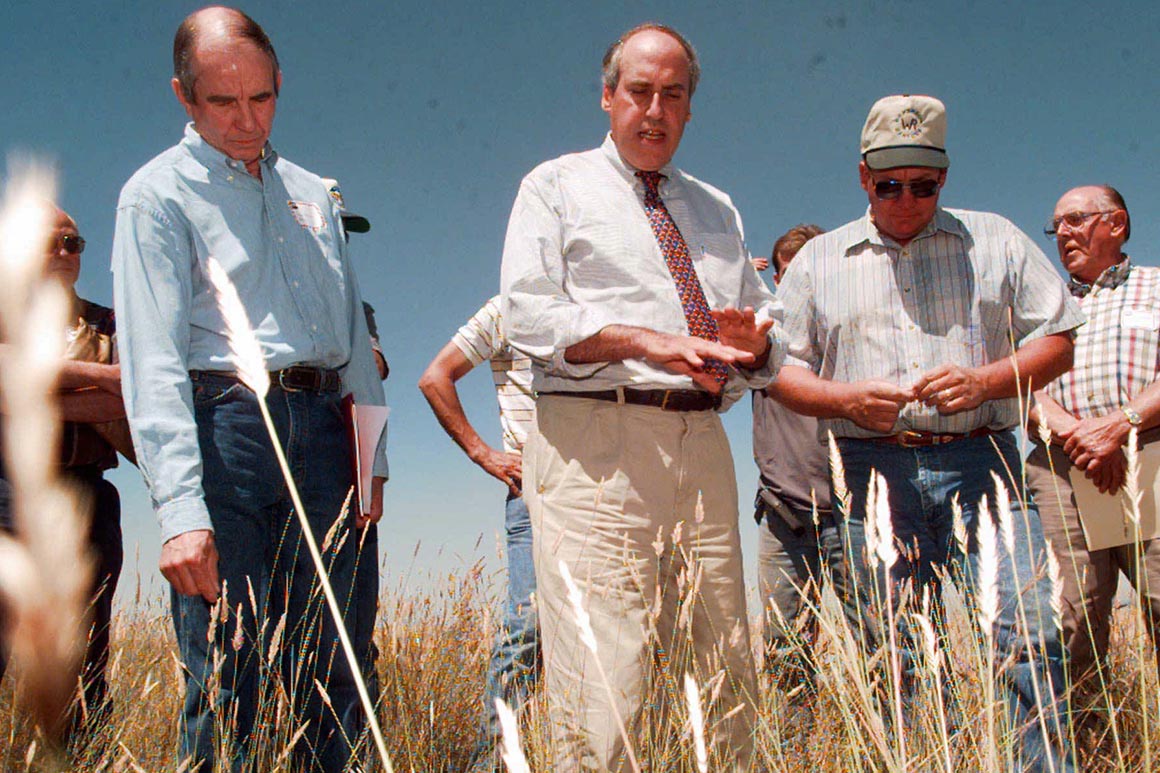 Before I became secretary of Agriculture, I never thought of getting food regularly thrown at you as one of the downsides of a career in politics.

For 18 years, from 1977 to 1995, I represented Kansas’ 4th Congressional District in the U.S. House. Losing that last race was a bitter pill to swallow, but in November 1994, I was handed a follow-up act: President Bill Clinton nominated me to become secretary of Agriculture. As my son, Jon, once said, my career had a way of “failing upward.” Only a secure child could talk like that, especially if his father agrees.

In my new Cabinet position, I was spending my days making public policy on traditional agriculture, food, nutrition and even the environment. The job had clear upsides. I felt I was having an impact on food and farming issues. And it certainly came with a higher national profile, which is typically useful for a political career.

But I also learned that a higher profile isn’t always a plus. Take it from me, the most assaulted Cabinet member in history.

True, I can’t be sure of that superlative. There is no organization that tracks these things. But I have never heard of any past Agriculture secretaries being subjected to the same volume of projectiles as I was during my time at USDA. To my knowledge nobody has had any memory of a Cabinet member who came close to my record.

I had all sorts of things tossed at me in my position as secretary of Agriculture—organic seeds by naked men and women in Rome, bison guts in Montana and tofu pies in D.C. It turns out people really care about their food. In a way, I think my career was a preview of the incivility that would eventually engulf our politics; only instead of barrages of hateful tweets and public harassment, I got food thrown in my face.

I came to the position at an interesting time, in the mid- to late-90s, when there was a large debate about organic food. Activist groups were energized on food issues, and for whatever reason, I bore the brunt of it as the Agriculture secretary. (In the years that followed my tenure at USDA, Cabinet members’ security increased, so I’m sure Cabinet members, including the Agriculture secretary, are subject to much less of these kinds of attacks now.)

In 1996, I led the American delegation to the United Nations Food Summit in Rome. As delegates gathered for a panel discussion and I prepared to speak, about two dozen men and women in the front row stood up and took off their clothes. Right in front of me, a rather portly gentleman turned around to face me, naked as the day he was born, and launched into a tirade against bioengineering as a way to produce more crops. He and his fellow protesters were adorned with body paint, spelling out the slogans “No Gene Editing” and “The Naked Truth.”

With seconds to spare before Italian police could tackle him, the man looked directly at me and others in our delegation and announced that he was going to spread “organically produced seeds.” Having gone nearly bald by this time, I was hoping that he might produce the hair I had been missing.

Actually, I stood there quite frozen in terriﬁed anticipation at what was about to come ﬂying in my direction, and boy, was I relieved when the only thing he spread were actual seeds, though I’m still not sure if they were organic.

My parents watched the entire episode broadcast live on CNN, and though my mother vigorously voiced her concern that my new job was too dangerous, my father seemed much more interested in the nudity. Once my mother stopped her scolding and worrying, my father got a word in edgewise.

My dad was more interested in what the women looked like. I soon realized that I had gotten off relatively easy that day in Rome. Back home in America, the assaults continued.

A couple of months later, I was at a meeting in Yellowstone National Park, along with Montana’s two senators and Governor Marc Racicot. The event was focused on the plight of bison when they stray from their zoned areas on federal land. Whenever that happens, they leave feces, which end up being consumed by grazing cattle, which causes disease that can often be fatal to livestock and dangerous to humans. To prevent the spread of disease, the state shot stray bison—a policy we were there to discuss that day.

As the governor made his remarks, a woman approached the podium with a bucket of rotting bison guts and hurled its contents toward us. I later learned she was an activist opposed to the killing of bison. Although Racicot took the brunt of the projectile, all of us were splashed with the putrid intestines. CNN was right there once again, providing coverage that reached Wichita. My mother wasted no time letting me know how worried she was about what her son had gotten himself into.

During a subsequent hearing of the House Agriculture Committee, I was right in the middle of my testimony when a man stood up and announced he was going to kill himself. As we discovered later, he was upset about a shipment of contaminated soda to Eastern Europe. He smashed two bottles during his tirade, showering me and the room with glass and carbonated soda. Just after he swung the bottles against the table, he gave me a menacing look, with the broken bottles still in his hands. I thought he was about to lunge at me when Congressman Earl Pomeroy, who was a standout rugby player at the University of North Dakota, put all his training to effective use and came ﬂying across the witness table. He performed a lifesaving tackle that would have made Vince Lombardi proud.

This entire scene was covered extensively in the media, and my mother’s phone calls, demanding that I ﬁnd a new job, were growing harder to laugh about. Maybe she had a point.

Sometimes in politics you can get caught up in issues for which you were not at all responsible. To this day I have no idea how I was to blame for any of these personal attacks on me other than they were attacking the chief food officer in the U.S. government; they were not really attacking Dan Glickman. Perhaps I was simply in the wrong place at the wrong time.

Just a couple of weeks after escaping the exploding soda incident, I was the keynote speaker at the National Nutrition Summit in Washington, D.C. I had just begun to speak when a protester jumped onto the stage and hurled a pie at me.

“Shame on you, Dan Glickman! You’re a meathead! Shame on you for being a pimp for the meat industry!”

The pie in question was made of tofu, with whipped cream, of course.

That time, I was able to dodge it—even though that meant some of it landed on Secretary of Health and Human Services Donna Shalala. Having learned my lesson by then, that people—naked or clothed—enjoy throwing all kinds of objects at the secretary of Agriculture, I was fast to duck, and the pie sailed by me, leaving just a touch of whipped cream on my jacket.

Adapted from Laughing at Myself: My Education in Congress, on the Farm, and at the Movies, by Dan Glickman, published by the University Press of Kansas, © 2021. www.kansaspress.ku.edu.