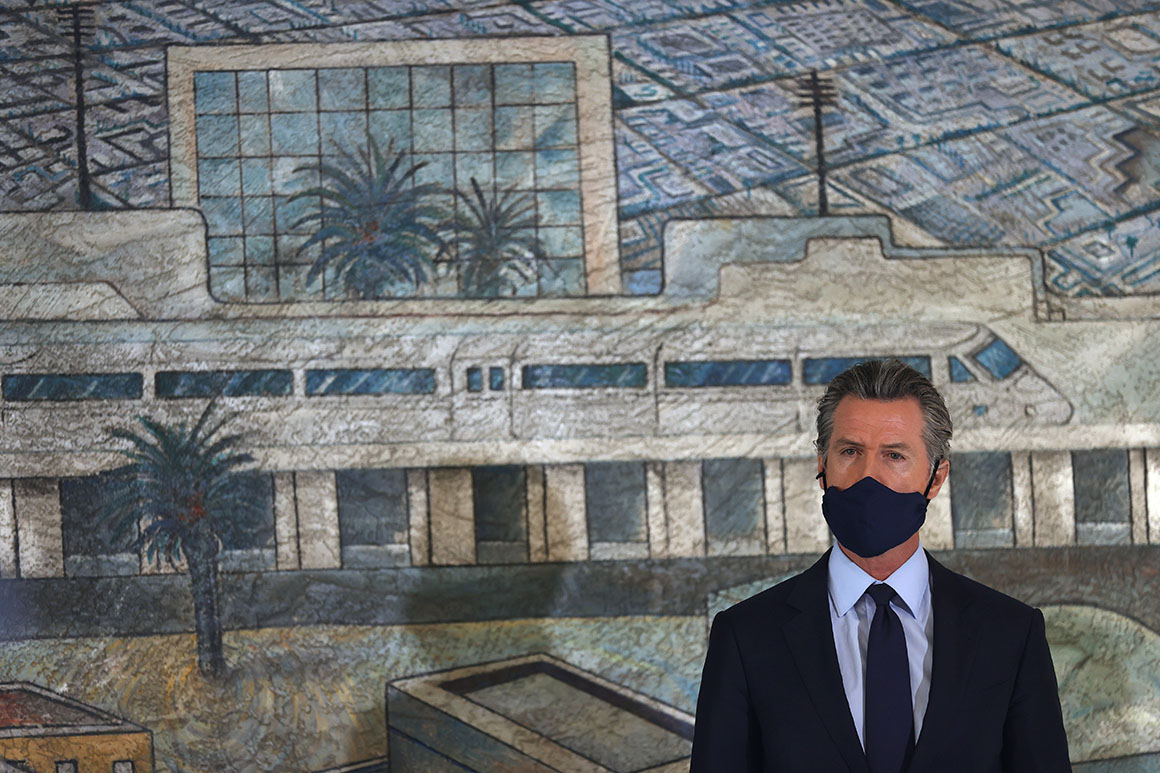 OAKLAND — California Gov. Gavin Newsom has the numbers, but his opponents have the enthusiasm — and Newsom is counting on a union-heavy army of allies to make up the difference.

With a recall vote looming, the Democratic governor’s political survival could hinge on activating enough of his base to counteract the fervor of conservative foes. A substantial part of that task will fall to unions that have vowed to defend him with a mass mobilization effort, dispatching members to doorsteps across the state.

“People like to make noise. That doesn’t translate to votes,” said Orange County Labor Federation Executive Director Gloria Alvarado. “The voters are already in support, so all we need to do is make sure we secure those votes and talk to our members to ensure that base. We’re not going to take it for granted.”

California’s recall election will ask voters two questions: whether they want to oust Newsom and who should replace him if the electorate removes him.

Political winds are gusting at Newsom’s back as the coronavirus pandemic steadily recedes. The state’s rebounding economy and brimming budget allow Newsom to regularly express optimism and, implicitly, confidence in his leadership. His approval numbers have stabilized and polls show a durable majority opposed to recalling Newsom, thanks in part to California’s overwhelmingly Democratic electorate.

But within those numbers lurks a warning sign: While California Republicans trail Democrats by millions of registered voters, polling shows they are more motivated to vote in a recall election powered by pandemic fatigue and conservative antipathy toward Newsom. It’s also the kind of off-year election that tends to skew toward loyal Republican voters.

“It’s going to happen at a time when voters aren’t used to going to the polls and that means they need an extra nudge,” said Democratic consultant Rose Kapolczynski, and “on the Democratic side, labor is one of the most powerful ground forces that exists.”

Universal mail voting could provide Newsom with a significant boost. The governor signed a bill this year that ensures ballots will land in mailboxes across the state, relieving his allies of the need to physically get most voters to the polls, though the state will still maintain in-person voting sites. A record 22 million Californians are now registered to vote, and the 88 percent of eligible voters who are registered is the highest share in decades.

“This is a different election and one in which labor’s voice can be much stronger because the ballots are sitting in people’s hands for 30 days,” Democratic Assemblymember Lorena Gonzalez said, adding that “with 30 extra days, I like our odds.”

Even before unions launched their get-out-the-vote drive, Newsom’s team had reactivated a network of 2,000 volunteers who will encourage voters to turn in their ballots with techniques like peer-to-peer texting. But labor boasts an especially formidable and battle-tested political machine. Unions spent some $12 million to elect Newsom in 2018, and they have so far supplied roughly $2 million to Newsom’s recall defense, with more certain to come.

That money is only part of the equation. More consequential than television spots could be the type of methodical, door-to-door voter outreach that has long been a mainstay of union political power. A coalition of prominent labor unions vowed this week to dispatch members to thousands of precincts across the state.

But Republicans believe that the energy is on their side. Anne Dunsmore, who runs one of the principal recall committees, hailed the “unparalleled” volunteer base for a recall that drew more than 2 million signatures despite a relatively bare-bones budget and a less professional operation that other statewide efforts.

“It’s purposeful and it’s organic, and that’s a very dangerous combination for anyone who’s trying to combat that,” Dunsmore said.

California Republican Party Chair Jessica Millan Patterson similarly said frustration with Newsom has spurred a surge of volunteers galvanized by the possibility of repudiating Newsom’s pandemic failures. Patterson noted that after “getting our butts handed to us” and losing seven House seats in 2018, Republicans clawed back four seats on the strength of a concerted effort to collect and turn in mail ballots — a practice that Republicans previously derided as “ballot harvesting” but have since replicated. Patterson said the recall would build on that momentum with similar tactics.

“Our people are going to be enthusiastic to turn out. We need to make sure we get every single one of those ballots in,” Patterson said. “I think we’ve proven we can win when it’s all-mail ballot and we are not afraid of it.”

Organized labor is one of the most influential political players in California, offering a deep reservoir of financial and political support to Democrats. While Newsom’s relationship with unions has endured turbulent stretches, labor leaders rallying against the recall argue he has been a resolute defender.

They cited Newsom’s actions to extend workers’ compensation to employees who contract coronavirus, offer rehiring priority to hospitality workers and use some of California’s budget surplus to reverse cuts affecting health care workers. They warned the Republicans vying to replace Newsom would undermine wage guarantees and labor protections like paid sick leave.

“There are specific stories that union leaders can tell their members because the governor was willing to stretch for working people,” said Gonzalez (D-San Diego), a former union official who is one of labor’s foremost allies in Sacramento. “There are tangible things to point to and possible losses if we don’t maintain this governor, so I think the choices are going to be clear.”

California Labor Federation Secretary-Treasurer Art Pulaski hailed the emerging effort as “the return of the ground game to California elections” after the pandemic halted voter contact. Pulaski said in an interview that volunteers would focus on the resurgent economy and on what he called Newsom’s steady and science-based approach to the pandemic.

“We’re the biggest operation going anywhere, and we have the potential to talk to the largest number of people,” Pulaski said. “We’re the most important factor in the election based on that, and we have the capacity to go out and activate those volunteers. I think a lot of folks have been frustrated to not be out there knocking on doors during the entire campaign of 2020 so they’re champing at the bit to get out there.”

Republicans argue that lingering coronavirus disillusionment will still doom Newsom. Even as businesses reopen and students return to classrooms, Patterson predicted that “no one is going to forget what we went through” in a year of fluctuating restrictions.

But an enthusiasm imbalance matters less if everyone is mailed a ballot containing a single issue, said Paul Mitchell, one of California’s foremost experts on voting data and outreach. He argued the combination of Newsom’s favorable poll position and the prevalence of mail ballots meant Newsom does not have to match his opponents’ enthusiasm so much as execute the basics.

“If you’re up 20 points in a basketball game, you’re not trying to make a bunch of crazy three-pointers,” said Mitchell, who is vice president of Political Data, Inc. “You’re trying to keep the lead and run the clock out.”