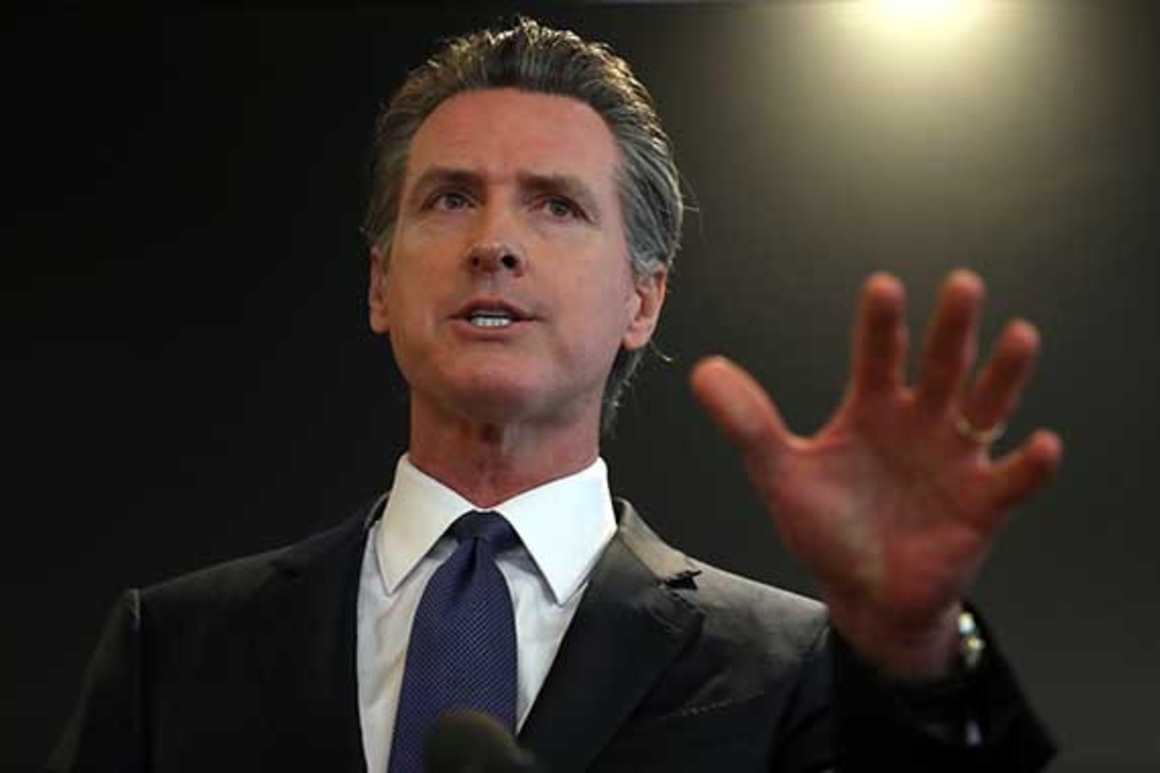 SACRAMENTO — Gov. Gavin Newsom is suing his own appointed elections chief to get two words next to his name on the recall ballot: Democratic Party.

The governor and his staff overlooked paperwork last year that would have allowed him to state his party preference on a recall ballot, according to a legal filing first reported Monday by Courthouse News. That apparent misstep means that Newsom would appear on the recall ballot without a party designation, while dozens of challengers will have their party preferences listed.

Newsom filed a lawsuit Monday against Secretary of State Shirley Weber in Sacramento Superior Court seeking to put his party preference on the ballot, based on the Courthouse News document. The Democratic governor nominated Weber to her post in December, replacing Alex Padilla, whom Newsom named to the U.S. Senate.

Weber, a former Democratic assemblymember, took office in January and is now in charge of certifying the recall election.

The legal challenge comes as California’s gubernatorial recall draws ever closer, with an election possibly happening in September. Weber last week confirmed that proponents had more than enough signatures to qualify the contest, and several administrative steps remain before the date is confirmed.

“The Secretary of State’s office has a ministerial duty to accept timely filed documents,” Weber’s office said Tuesday in a statement on Newsom’s lawsuit. “Acceptance of filings beyond a deadline requires judicial resolution.”

The lawsuit filed by Olson Remcho, LLP — a longtime Democratic Party election law powerhouse — argues that the narrow window to file the paperwork was unnecessarily arbitrary and that there remains plenty of time to practically add the governor’s party preference, considering the recall election has not yet been certified. Under state law, Newsom had to file his party preference within seven days along with his response to the now-successful recall petition that launched in February 2020.

In another twist, not only did Newsom appoint the elections chief blocking his party designation on the ballot, but he signed the very legislation whose timeline he’s taking issue with.

Before 2020, recall-threatened officials did not have an option to have their party designation on the ballot in California, which Sen. Tom Umberg (D-Santa Ana) saw as a problem. The Democratic lawmaker wrote Senate Bill 151 in 2019 to allow officials facing a recall to add their party.

Umberg argued that “unlike the elected official being recalled, candidates seeking to succeed the elected official in a recall election are able to have a ballot designation,” according to a Senate bill analysis. He also argued, “By providing additional identifying information on the ballot, voters are able to make a more informed choice when deciding to retain or remove an individual from office.”

The proposal sailed through the Assembly on a 77-0 vote and through the Senate on a 38-0 tally before getting Newsom’s signature. The vote tallies indicate that the bill passed on the consent calendar in each house and was not subject to debate as a noncontroversial proposal. As such, it’s also likely that the governor did not scrutinize the bill’s implications.

When Newsom was required to file paperwork in February 2020, the state had not yet imposed Covid-19 closures and gubernatorial recall petitions were dismissed as hopeless efforts routinely filed by conservative Republicans.

The governor’s suit argues that the bill tied the party preference deadline to an existing response timeline out of convenience for the officeholder, not for any concern for election efficiency. It also suggests that Newsom is being unfairly punished by having to file his party preference 16 months in advance, while challengers have 59 days before the election.

“To apply that deadline here would also lead to absurd results,” the suit states. “The voters would be deprived of the very information the Legislature has deemed important for them to receive, all because the Governor’s counsel inadvertently failed to file a form about the Governor’s ballot designation at least sixteen months before the recall election has been called and long before it became clear that the recall would even qualify for the ballot.”