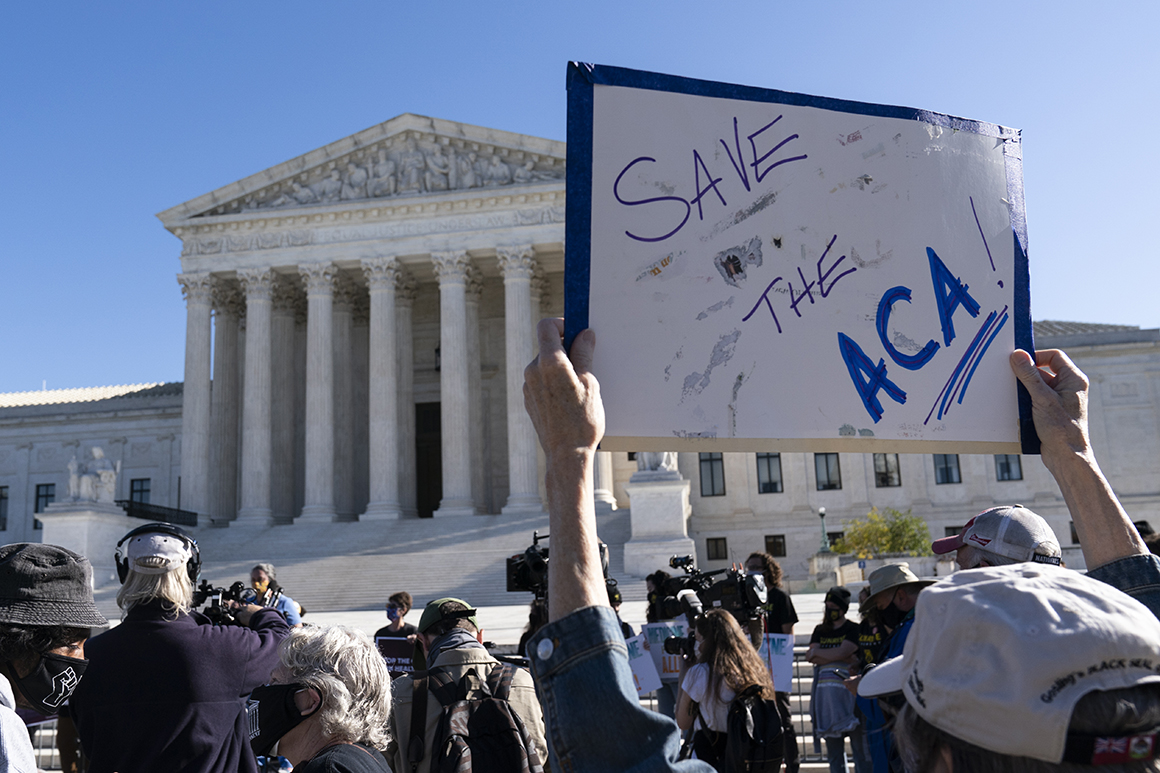 For once, Democrats and Republicans are offering the same message on Obamacare: The landmark health care law is here to stay.

But so are the partisan battles over the law’s future, even after the final shreds of the GOP’s decade-long effort to repeal the Affordable Care Act appeared to be demolished by the Supreme Court’s 7-2 decision Thursday affirming the law for the third time.

The highly anticipated ruling, which found a group of Republican-led states lacked the legal standing to challenge the ACA, marks a clear turning point in the long-running health care wars that have defined a generation of politics. Even the law’s staunchest foes on Thursday dismissed the chances it would face another life-or-death moment before the courts.

“It’s significant in that it allows all parties to move on, to either build up or tear down — but they have to do so legislatively,” said health care strategist Chris Jennings, who has advised the last three Democratic presidents. “The courts are basically saying: Stop it, move on, you have every ability if you want to alter this bill, but do it by the books.”

The ruling will give new energy to Democratic efforts to build on Obamacare, through richer insurance subsidies and potentially a public option. And Republicans, who never settled on the “replace” part of their anti-Obamacare pledge, condemned the law’s high costs in the aftermath of Thursday’s ruling and vowed to fight Democratic proposals to expand government coverage.

“I suspect we’re going to continue to be working to try to make health care more accessible,” said Sen. John Cornyn (R-Texas), whose home state led the latest legal threat to the ACA. “I think three times the Supreme Court’s upheld the Affordable Care Act, and I think we need to move on.”

For Democrats, the court decision could also bring on a long-delayed reckoning over the party’s own vision for a health care system, now that the latest legal challenge to the ACA has collapsed. Democrats universally agree that the ACA has its problems — high premiums, large deductibles, and a gaping coverage gap in the dozen, predominately Republican-led states refusing to join the law’s Medicaid expansion.

“For many years one of the biggest obstacles to making big progressive steps on health care was the mantra that we needed to implement Obamacare and then defend Obamacare,” said Adam Green, co-founder of the Progressive Change Campaign Committee. “It was a very existential block to going forward, just keeping the law alive. Now that it seems quite safe, there’s more flexibility across the Democratic Party to take bold steps.”

But Democrats disagree on the next steps, and Obamacare’s future could look very different depending on where party leaders steer the ship.

President Joe Biden, who campaigned on more seismic changes to the ACA like a public option and lowering the Medicare age to 60, has pulled back since taking office to focus on more incremental policies that won’t disturb intraparty harmony or the powerful health care industry. The Democrats’ Covid relief package in March temporarily boosted Obamacare subsidies by nearly 30 percent, aiming to lower costs for low-income Americans and draw more middle-income families into the law’s insurance marketplaces. Biden is pushing to make those subsidies permanent in infrastructure legislation, prioritizing them over other Democratic health care proposals.

“How much further will the ACA in all its various forms be expanded?” said Tom Miller, a resident fellow in health care policy at the conservative American Enterprise Institute. That could become a long-running dispute between Democrats and Republicans as they trade control of Washington.

“That’s where the point of engagement is, and where it may shift back and forth, instead of, ‘I’ve got another lawsuit for you,’” Miller added.

While Republicans broadly oppose the expansion of insurance subsidies, they’d be powerless to stop it from happening in this Congress if Democrats include the aid in an infrastructure package they advance along strictly party lines.

The prospects for other Democratic health care priorities are uncertain. Biden has steered clear of substantive debate on other campaign proposals, like lowering Medicare’s eligibility age, government-mandated drug price negotiations and creating a government-run insurance option.

The White House has even taken a back seat on one of Biden’s most full-throated campaign priorities: finessing a federal work-around for coverage in the dozen states that have rejected federal help to expand Medicaid to roughly 2 million low-income adults. Democratic lawmakers have been trying to work out the details for months, hoping to strike an approach that won’t anger the health industry or states that already joined the optional Obamacare program.

With razor-thin margins in Congress, Democrats have just a small window to deliver on their health plans before the 2022 midterm elections. Debate over the party’s health care vision was already in full swing this year, and it could heat up now that Obamacare has been secured by the high court.

Sen. Bernie Sanders (I-Vt.), who as budget committee chairman will have strong sway over Democrats’ infrastructure legislation, insisted Thursday he won’t give up on lowering the Medicare age this Congress. He’s also called for expanding the program to cover vision, dental and hearing.

“There are millions of older workers who would like to get Medicare who today can’t, which is why we’ve got to lower the age, and there are millions more walking around, who cannot hear, can’t afford eyeglasses, and can’t afford dental,” he added, according to a Capitol Hill press pool report.

Senate health committee chair Patty Murray (D-Wash.) and House Energy and Commerce Chair Frank Pallone (D-N.J.) have started collecting feedback on a public option, kicking off what could be a lengthy process to develop a policy Democrats could agree on. The idea has gained support since it was jettisoned from the ACA during the law’s drafting, but there are different ways of designing a public option.

“But it’s still going to be difficult because it is a very important and major change in the law, and the Congress doesn’t move very quickly,” said Henry Waxman, one of Obamacare’s lead authors in Congress who now helms his own consulting firm.

Rachel Roubein contributed to this report.