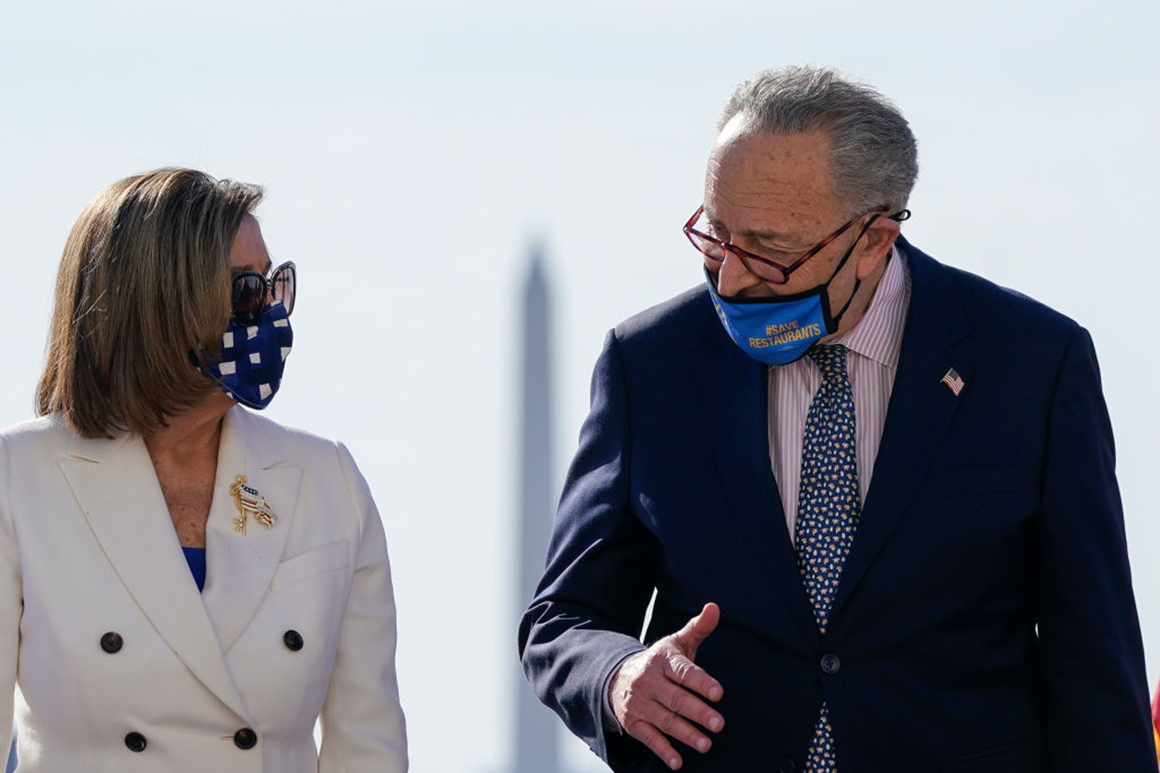 While a gang of self-appointed Senate negotiators rack up headlines, Nancy Pelosi and Chuck Schumer are quietly steering their party’s infrastructure mess to a conclusion they insist will be a huge win.

Congress’ top two Democratic leaders will huddle with White House officials on Wednesday evening at a critical apex for President Joe Biden’s spending plan, which has been muddled for weeks by bipartisan negotiations that still haven’t won widespread consensus between parties — or even among Democrats.

Publicly, the Speaker and Senate Majority Leader are giving space to the Senate’s bipartisan gang to work toward a compromise that could achieve Biden’s desire for cross-aisle cooperation. But as Pelosi’s and Schumer’s members attempt to scrape together a bipartisan bill, they’re signaling they will take up a Democrat-only bill, too, encompassing as much of Biden’s sprawling $4 trillion spending plan as the party can swallow.

“I know the speaker has been clear, and we’ve been clear that there’s not going to be the votes in the House from progressive caucus members for any kind of smaller infrastructure bill, without a separate reconciliation bill,” said Rep. Pramila Jayapal (D-Wash.), who leads the Congressional Progressive Caucus. “I anticipate that will be a big part of the discussion.”

Top Democrats, as well as Biden’s legislative team, have urged members to remain a united front. For instance, White House officials recently spoke to a group of senior House Democratic aides and encouraged them to raise concerns about the package directly to the administration, rather than their bosses drawing red lines in the press, according to a person on the call.

But that union grows more fragile by the day, with many Democrats running out of ways to characterize their frustration with GOP talks without scorching their own president. Now, it’s more than just the party’s most liberal members who prod Biden to move on, anxious that they’re losing precious time to assemble a far more impactful Democrat-only bill.

“At some point, it either has to become real or not real. And if it’s going to become real, it needs more than 21 votes in the Senate. So I think the leader’s been allowing all conversations to take place to try and find a solution,” said Sen. Patty Murray (D-Wash.), the No. 3 Democratic leader. “We’re fast-reaching a point where the solution needs to be found and moved. And that’s where it takes leadership.”

The political math is fraught for both options: Pelosi and Schumer won’t have enough votes for a bipartisan bill unless they can commit to moving a Democrat-only one as well. And for that to succeed, they’ll need to balance growing demands from the left, who want a $6 trillion package that also achieves agenda items on climate, immigration and more — without losing moderates who fear a big “tax and spend” package would sound the death knell for their majority in 2022.

And Schumer and Pelosi are staying tightly aligned, given the similarly small margins they both must maneuver.

“It’s getting to decision time, where leaders are going to have to make some decisions about the path forward. I think what’s great about their styles is, by being willing to give their members latitude, when it’s time for them to make tough decisions their members are more willing to follow,” said Sen. Chris Murphy (D-Conn.). “We might be getting to one of those moments.”

Schumer has laid out an aggressive schedule for July that has added urgency to the bipartisan group’s meandering talks. He instructed the Senate Budget Committee members to come up with a budget the whole caucus can support and requested it be finalized when the Senate returns from its recess in September, according to a person familiar with the issue.

The full Senate will then consider that budget and set up a larger, Democratic-only bill in the coming weeks. Progressives insist that bill get a vote alongside bipartisan legislation — a time crunch considering there’s no signed agreement, and certainly no bill text.

The House, meanwhile, is eyeing a budget committee vote as early as the week of July 12 with a floor vote the week after — though that schedule is still fluid, according to a person briefed on the plans. Many Democrats believe a final reconciliation bill won’t be ready for a floor vote until September at the earliest, though progressives want action in this summer.

Democrats have also been meeting privately with the parliamentarian for weeks to ensure Biden’s priorities can pass with only 51 votes under Senate reconciliation rules, which generally requires a focus on spending measures rather than policy changes to evade a filibuster.

Sen. Ed Markey (D-Mass.) said Congress should not go on August recess without dealing with Biden’s domestic spending agenda. Because when they return in September, they’ll likely be confronting an expiring government funding bill and the threat of a debt ceiling breach.

“We’ve got to do both,” said Rep. Gregory Meeks (D-N.Y.), who said he’s discussed the matter with another senior New Yorker: Schumer himself.

Of course, that strategy would require not only a bipartisan deal but essentially unanimous agreement among all Democrats in Congress on a sprawling second bill that could include everything from immigration to prescription drug pricing reform to paid family leave to spending to fight climate change.

“If you added the two plans together, it would be the biggest spending bill in the history of the country,” House Budget Committee Chair John Yarmuth (D-Ky.) said. “So, there’s no way it’s gonna be easy.”

As the bipartisan talks drag on, some progressives have complained that the gang of Senate negotiators has tried to drive the process, rather than the party in charge of both chambers of Congress. But Democratic leaders, including an array of their committee chairs, have been working behind the scenes, including with those Senate negotiators, on both plans.

“We talk to all these people,” said House Energy and Commerce Committee Chair Frank Pallone (D-N.J.), dismissing concerns that the Senate group was crafting a plan without the chairs’ input. “The idea is to try to build a consensus, and that goes on all the time.”

The end result could be a legacy-defining safety net expansion for both Biden and the Democratic leaders — if they can get it done. Already, some lawmakers acknowledge that their summertime sprint on infrastructure will be tougher than even the pitched internal battles over Obamacare from a decade ago, given the even thinner majorities.

Rep. John Larson (D-Conn.), a senior Democrat who survived those Obama-era legislative battles, said he never really expected a GOP compromise on infrastructure. Larson said if anyone could keep the coalition together for the broader package, it’s Biden and his Democratic allies in leadership.

“Biden has the capacity of bringing everybody together. And last time I checked, Pelosi’s pretty good, too,” Larson said.

Marianne LeVine and Laura Barrón-López contributed to this report.