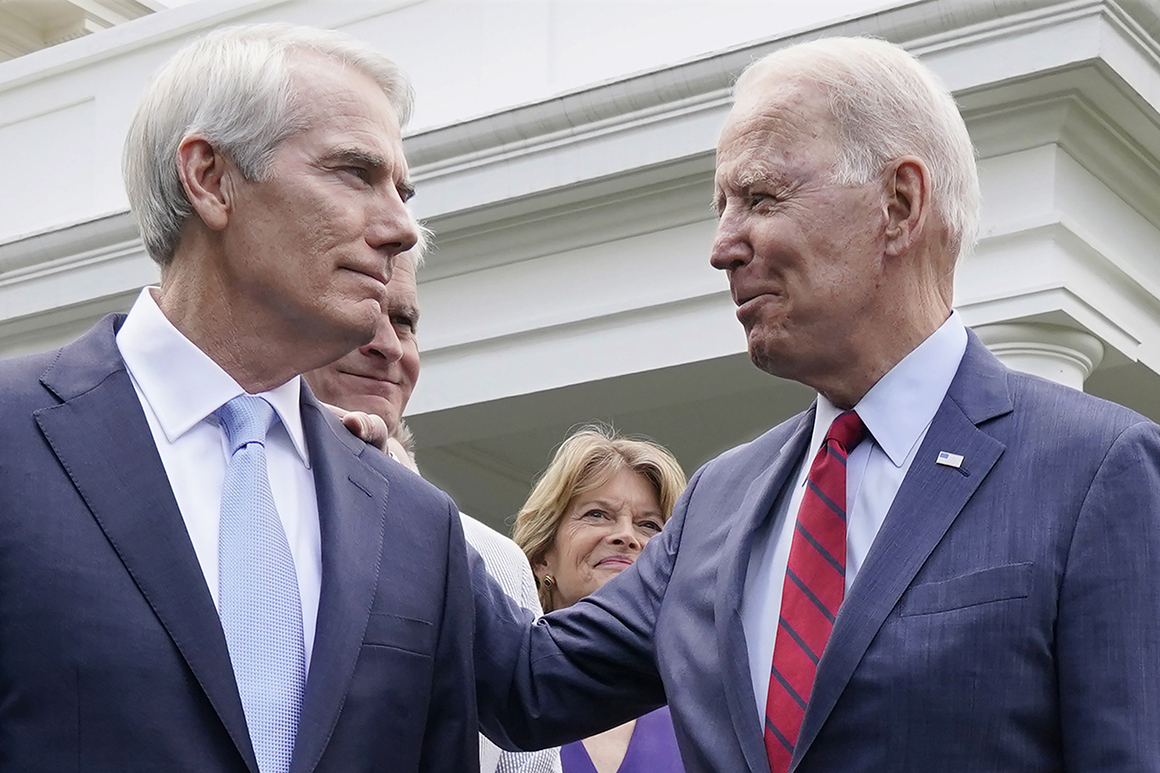 President Joe Biden’s domestic agenda appears back on track in Congress, with Republicans praising his newly clarified approach to their bipartisan infrastructure plan and a key Democrat endorsing work on a separate, larger spending package.

Two GOP negotiators on the bipartisan infrastructure deal said Sunday that they were mollified by Biden’s Saturday statement vowing to support the bipartisan framework on its own merits, rather than withholding his signature until he also received a larger, partisan proposal. Many Republicans interpreted his remarks in the aftermath of their deal on Thursday as an implicit veto threat.

Sen. Mitt Romney (R-Utah) said on CNN’s “State of the Union” that “the waters have been calmed” by Biden’s statement Saturday that clarified he supports the bipartisan plan “without reservation.”

Romney predicted the proposal, which has not been drafted but aims to provide nearly $600 billion in new spending on roads, bridges and broadband, would have sufficient support to pass the Senate. It will need at least 60 votes, including at least 10 Republicans. Some of those needed GOP votes wavered on Friday after Biden said if the bipartisan bill “is the only one that comes to me, I’m not signing it.”

“I am glad they have now been de-linked and we can move forward with a bipartisan bill,” said Sen. Rob Portman (R-Ohio), the lead GOP negotiator, on ABC’s “This Week.” He said Republicans “were glad to see them disconnected. And now we can move forward.”

Portman and Romney’s comments signal that over the two-week July Fourth recess, negotiators can start drafting legislation that provides the largest investments in physical infrastructure in U.S. history. While there are more opportunities for that effort to be derailed, Biden’s work to reassure Republicans to stay on board and his acknowledgment Saturday that they were “understandably upset” with him seems to be paying off.

At the same time, the larger Democratic spending bill on child care, climate change, Medicare expansion and other progressive priorities is also being shaped by party leaders — and a certain swing vote from Appalachia.

West Virginia Sen. Joe Manchin, Democrats’ most elusive vote for that plan in an evenly split Senate, indicated on Sunday that he would join in that work on a bigger, separate “human infrastructure” measure. He also said he would support raising the corporate tax rate to 25 percent and increasing capital gains taxes to 28 percent to help pay for the bill, compromise positions that will nonetheless elate Democrats who want to raise taxes on corporations and the wealthy.

But he brushed back on Senate Budget Chair Bernie Sanders’ (I-Vt.) proposed $6 trillion price tag and said he’d like to avoid deficit spending on that proposal. Manchin suggested Sanders’ ambitions could be cut by 75 percent or more in order to earn his vote.

“If they think in reconciliation I’m going to throw caution to the wind and go to $5 trillion or $6 trillion when we can only afford $1 trillion or $1.5 trillion or maybe $2 trillion and what we can pay for, then I can’t be there,” Manchin said on “This Week.”

Senate Majority Leader Chuck Schumer said he wants the Senate to consider the bipartisan infrastructure plan in July, as well as pass a budget resolution setting up the separate, partisan bill. Set for advancement using the procedural protections of budget reconciliation, that second bill needs lockstep Democratic support in the Senate but can avoid a GOP filibuster.

Speaker Nancy Pelosi has said her chamber won’t take up the bipartisan bill without Senate passage of the reconciliation bill. Democrats will first have to settle on a price tag for their budget bills.

It’s a convoluted congressional strategy but reflects Biden’s approach in Congress, balancing his desire to cut deals with Republicans alongside his stewardship of a party that is much more progressive than it was a decade ago. He made clear on Saturday that he views his infrastructure agenda as two separate pieces of legislation and predicted both will come to his desk for his signature.

“Some other Democrats have said they might oppose the infrastructure plan because it omits items they think are important: that is a mistake, in my view. Some Republicans now say that they might oppose the infrastructure plan because I am also trying to pass the American Families Plan: that is also a mistake,” Biden said on Saturday. “I intend to work hard to get both of them passed.”