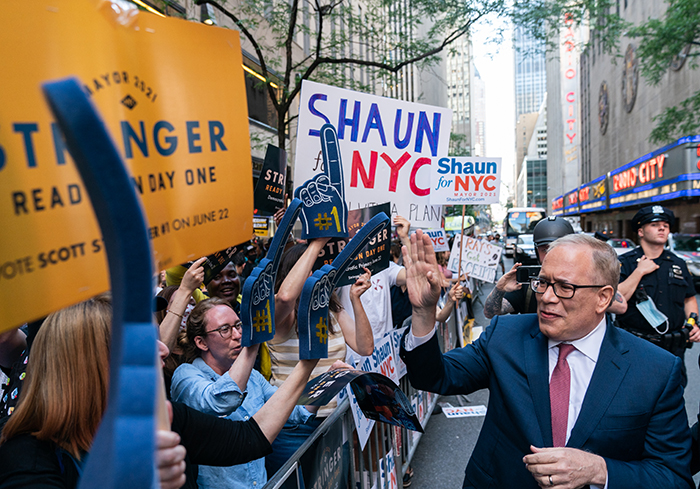 NEW YORK — When Scott Stringer took the stage on primary night in New York City, he sounded like a man who had come to the end of something.

He thanked supporters of his mayoral campaign “for giving me the best 29 years in elected office anyone could ever have.”

In the end, those decades in local politics and years of careful preparation for a mayoral bid amounted to a fifth place, single-digit finish in election night returns.

Stringer, the city comptroller who was considered a presumptive front-runner at the beginning of the Democratic primary, saw his campaign crash and burn after two women came forward to accuse him of sexual misconduct.

He got just over 5 percent of first-choice votes, finishing behind Eric Adams and three other candidates. He emerged early for a concession speech, opening with a quip that he was surprised “you all came.”

“Our city that went through its greatest challenge, our city that lost so many people, our city that came together because no one can keep New York down, I believe will be bigger and stronger than ever before when we have a new mayor in New York City,” he told supporters at The Ribbon on the Upper West Side, his longtime political base — which ended up voting by large margins for former Sanitation Commissioner Kathryn Garcia.

“This was a very tough election for me and my family. But it was a very inspirational one as well,” Stringer said, promising to support the eventual winner of the still-undecided Democratic primary.

Stringer’s campaign was just beginning to pick up steam this spring, winning the endorsements of the Working Families Party and the United Federation of Teachers.

Then Jean Kim, a volunteer on his 2001 campaign for public advocate, accused him of repeatedly groping and kissing her without her consent. He denied the allegations, but the WFP and a host of progressive elected officials and advocacy groups that had gotten behind his campaign quickly withdrew their endorsements.

Stringer pressed on with his campaign, and continued to show some strength in polls even after his institutional support collapsed. But then a second woman, Teresa Logan, told the New York Times that Stringer groped her and made unwanted sexual advances when she was an 18-year-old waitress at a bar he ran three decades ago. After that, the longtime politician was largely written off.

Progressives, led by Rep. Alexandria Ocasio-Cortez, eventually coalesced behind attorney Maya Wiley, who came in second to Adams in first-choice votes and remains in the running for a ranked-choice tally next week.

Ocasio-Cortez said in a radio appearance Tuesday that she ranked Stringer second, which he said in his concession speech came as a surprise.

Assembly Member Linda Rosenthal, a Stringer endorser who stuck with him, said the misconduct allegations were unfairly taken at face value. “There were so many errors, inaccuracies,” she said.

Voters in her Upper West Side district still “love him,” Rosenthal said — but did not rank him first because he was no longer perceived as viable. “They thought, ‘Well, he’s not going to win,’” she said.

Stringer will leave office as comptroller at the end of this year, after two terms. City Council Member Brad Lander is ahead in the race to succeed him.

He was born into politics in Manhattan’s Washington Heights. His mother was a City Council member and a cousin to legendary former Rep. Bella Abzug. His father worked for former Mayor Abe Beame. Stringer was an early protégé of Rep. Jerry Nadler, eventually became a state Assemblymember and then Manhattan borough president, before winning his comptroller seat in 2013.

Stringer has not decided what he wants to do next, according to a person close to his campaign. His camp believes that most voters abandoned him because they believed he had no shot of winning — but that the allegations do not necessarily preclude a future run for office.

“I think it tarred him, absolutely. But I don’t think his options are limited at all,” Rosenthal said. “I think a lot of people were skeptical, but it all snowballed into trying to cancel him.”

Stringer ended his remarks by teasing his so-far unclear future in city politics.

“I want to tell all of you that I’m not going anywhere,” he said. “I mean, I’m just getting started. They’re not going to keep our vision and our coalition down.”