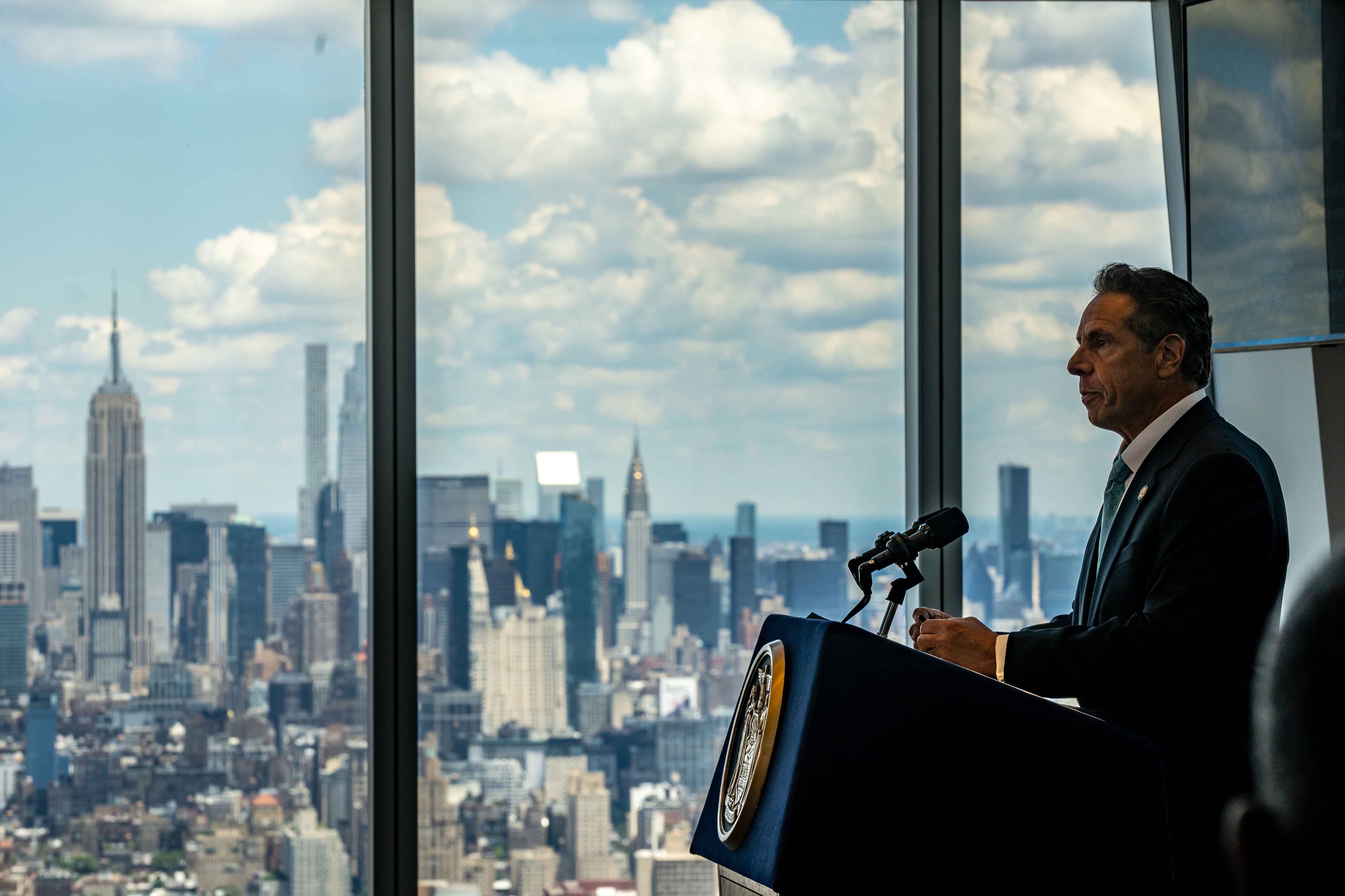 ALBANY — It seems impossible to imagine now, but there was a shining moment seven years ago when the governor of New York and the mayor of New York City seemed like buddies.

It was 2014, and the city was still recovering from the devastation of Superstorm Sandy. In his autobiography, released that year, Gov. Andrew Cuomo wrote about the challenges that would await the state and city when the next big disaster hit: “Fortunately, my longtime friend and former HUD colleague Bill de Blasio is now mayor of New York, and being able to work cooperatively will be a major asset,” he wrote in “All Things Possible.”

That cooperative spirit, like the book itself, had a very limited shelf life.

Cuomo’s then-longtime friend will soon be a former mayor, raising new questions about how the embattled and combative governor will deal with whomever emerges from the city’s ranked-choice vote counting. Although Cuomo is under investigation and facing a potential impeachment, he may outlast de Blasio in office. Eric Adams is leading the Democratic primary at the moment — should he prevail, he would be the first New York City mayor with significant experience as a state legislator since Robert F. Wagner, who served three terms in City Hall between 1954 and 1965.

Adams’ eight years as a state senator, the final two of which coincided with Cuomo’s first two years as governor, might help him avoid the bumps and potholes that only mayors seem to find during the journeys north on the New York State Thruway.

“He has a good relationship with the governor and you saw during the campaign that more New York City state officials supported him than any other candidate,” Adams campaign adviser Evan Thies said in an interview. “That’s partially because he was a colleague of theirs for so long.”

But as Cuomo and de Blasio reminded New Yorkers repeatedly since 2014, the institutional relationship between governor and mayor suggests it was designed not by political theorists but the fireworks-making Grucci family. New York City, despite its might as the nation’s biggest city and a global seat of economic power, very much relies on the people who run its state capitol to get anything done. It’s transit system is controlled by the state, and Cuomo in particular, and many of its most important policies require the blessing of elected officials from as far away as Niagara Falls.

Structurally, conflict between mayor and governor just can’t be avoided — and that has real consequences for the city’s residents.

“Obviously the best outcome for New Yorkers is that the mayor and the governor get along,” said Freddi Goldstein, a former top aide to de Blasio who worked in his office from 2016 to 2020. “But there’s very little historical precedent for that. I can say that my experience as a New Yorker and in city government shows that this governor is not really working for friends. And I just don’t see that dynamic changing.”

The governor has the raw political power; the mayor, the celebrity befitting the chief executive officer of the media capital of the world. The city is a creature of the state, as mayors often discover to their astonishment not long after taking their oath of office, and Albany — not just the governor, but the Legislature as well — prefers to keep its creation strapped to a gurney rather than have it thrashing about on its own.

That was true when Gov. Al Smith decided that Mayor John Hylan had to go in favor of the ostensibly more-reliable Jimmy Walker in 1925; it was true of Nelson Rockefeller and John Lindsay, both presidential wannabes who got in each other’s way in the 1960s; and it was true of bitter rivals Mario Cuomo and Ed Koch, the latter of whom managed to get in one last dig at his sparring partner (and his son) before departing for presumably more-peaceful settings.

Add the distinctive personality of Andrew Cuomo to the mix and it would seem inevitable that the next mayor ought to invest in a couple of decent sweaters, for the governor, even in his embattled state, will surely cast a cold shadow over Gracie Mansion in the months to come.

Adams told moderators in a June 10 debate that he was confident he could build a good relationship with the governor, who is now facing an impeachment inquiry and criminal investigations tied to accusations of sexual and governmental misconduct. “Well, I get along with everyone,” Adams said. “That’s the joy of who I am.”

“I’m going to put my ego to the side,” he continued, when pressed for details. “I’m going to sit down and work in relationship with the governor and say, ‘we’re team New York’ and we’re not going to have public disputes. We’re going to solve our problems.‘”

But some problems require not a hearty handshake but a hat in mayoral hand. Humility doesn’t come easily to most politicians, but mayors of New York — as well as the Empire State’s other cities — quickly learn that bowing and scraping are necessary to get the funding and policies that only Albany can provide.

Adams would be the first Democratic mayor to come into office in decades without a foil from Republicans in the state Senate. De Blasio, a progressive, pursued a natural alliance with the downstate-dominated state Assembly, but Adams’ more centrist positions might easier align with moderate ideology in the Senate — and with that of the governor himself. That could facilitate cooperative work with the governor and lawmakers on issues of importance to the city.

Still, there’s humility and then there’s humiliation, and de Blasio became only the latest New York City mayor to learn the difference. Adams might try a different style of responding to Cuomo’s jabs, at least initially, said one longtime Democratic consultant who works in both city and state politics and is familiar with the Adam campaign.

“The thing that I would say about Eric versus de Blasio is that is Eric isn’t afraid to get into a fight,” said the consultant, who spoke on condition of anonymity to speak frankly about the powerful figures. “He’s not afraid to start a fight and he certainly isn’t afraid to finish one. So I think that if that’s the way that he [Cuomo] wants to take it, I don’t think Eric’s going to take it lying down.”

Cuomo has undercut, contradicted and superseded de Blasio too many times to count, and as the city prepares for a new regime, the governor saw fit to display the formidable power of his contempt as election results rolled after Tuesday’s primary.

“It’s hard for me to work with an administration that is hyper-political and is not competent,” Cuomo said of de Blasio’s City Hall during a news conference Wednesday morning. “And it’s hard for me to do that for a prolonged period of time. And I believe that’s what happened with New York City … We need to get things done. We need results. And I need a competent partner in local government.”

De Blasio’s response the following day? “I stopped listening to him a long time ago.”

Suffice it to say, the next mayor will be eager to persuade Cuomo that the de Blasio era is truly done and gone.

“Everybody has their own style, but [de Blasio] was running into a buzz saw that was a bad relationship with the governor,” state Senate Deputy Majority Leader Michael Gianaris said in an interview. “So every time he poked his head in to try to do something, it seemed like he was smacked down. Hopefully the next mayor will not run into that.”

De Blasio was hard-pressed to find champions — even in the Democratic-led Assembly — who would really go to bat for him. That could have been helpful on several issues, including his unsuccessful attempts to eliminate the controversial entrance exam for the city’s specialized high schools.

It wasn’t necessarily a lack of good will, but an administration that didn’t always work the Albany negotiation levers, state Sen. Brian Benjamin, a Manhattan Democrat, said in an interview at the Capitol.

“You have to get someone who understands how power works,” Benjamin said. “If you’re mayor of New York City, you have jurisdiction over this, I have jurisdiction over that. If you want to get my group to do what you want, you come with the problem and you talk about the solution. You don’t come with the solution you want already. There’s no buy-in.”

In that sense, Adams would appear to have an advantage over the only other two candidates who could overtake him when ranked-choice voting is completely tallied. Neither progressive Maya Wiley, a former de Blasio staffer and an MSNBC commentator, nor the more-moderate Kathryn Garcia, a former city Sanitation commissioner, have held elective office before. Adams has experience in both state and municipal politics, and as a moderate Democrat, he would seem a good fit to work with a governor whom progressives tend to despise.

“I think there’s a very high likelihood that the relationship starts out positive,” Goldstein said. “Whoever wins, the governor reaches out to and they form some partnership, all hunky-dory in the beginning. But it would be naive to think that’s where the relationship stays.“

So what will Adams start off with on his Albany wish list? Public safety, education and housing, said Thies, the Adams adviser.

“Albany can be most helpful with ensuring we have the resources we need for improvements to public safety,” Thies said. “That’s about dollars and programs from the NYPD to the MTA.”

The perennial war over education funding, which saw a brief detente thanks to the federal stimulus package, is likely to heat up in future budgets, Thies said, and money for public and affordable housing will be an ever-present conflict.

De Blasio press secretary Bill Neidhardt said that a beleaguered three-term Cuomo means the next mayor will enter Albany with a world of possibilities, regardless of who ultimately clinches the title. “You’re really talking about a completely different reality with a severely diminished Andrew Cuomo,” Neidhardt said.

More than 50 Democrats in the state Legislature, both of the state’s U.S. senators and the majority of its House delegation called for Cuomo to resign after his scandals began to snowball earlier this year. Federal investigators are now looking into whether the Cuomo administration hid the number of Covid-19 deaths tied to nursing homes, and state Attorney General Tish James is conducting a widespread investigation into claims of sexual harassment and workplace misconduct made by former aides.

“I think we’ve seen that difference this year, where the state Legislature passed a budget that invested heavily in working people in New York City, and I think we’ll also see that difference carrying forward for the next mayor, whoever it is,” Neidhardt said, citing a “massive shift in power“ has meant that “Cuomo doesn’t call all of the shots any more.”

Cuomo, for his part, said he knows Adams from his work in the Senate “on many budgets, many bills, for many years.” As he did for his old friend de Blasio, he offered plenty of early praise.

David Giambusso contributed to this report.