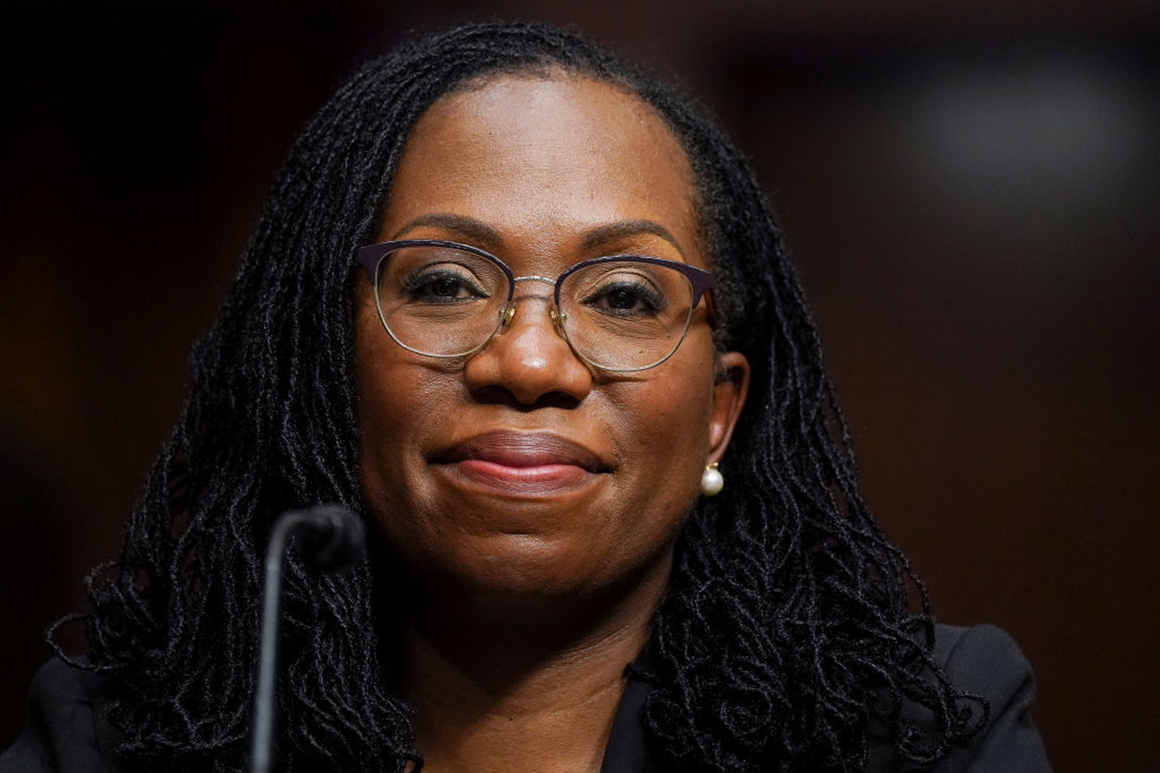 Democrats are surprisingly confident about at least one item on President Joe Biden’s agenda: confirming judges.

After four years of watching Senate Republicans install more than 220 of former President Donald Trump’s picks on the federal bench, Democrats are ramping up their approvals of Biden’s nominees. The Senate on Monday confirmed Judge Ketanji Brown Jackson to replace now-Attorney General Merrick Garland on the D.C. Circuit Court of Appeals, considered second only to the Supreme Court in its nationwide reach.

Jackson, widely viewed as a potential high court nominee, is Biden’s first circuit court selection to be confirmed and follows three district judges who won Senate approval last week. While Democrats acknowledge that it’s unlikely Biden will near the same number of approved judges as his predecessor — especially on the circuit courts, where 30 percent of judges are Trump appointees — they say they’re pleased with their pace and are just as excited about who Biden is nominating, citing the president’s uniquely diverse slate of picks.

“The number’s important, but the quality of the nominee is even more important,” said Senate Judiciary Chair Dick Durbin (D-Ill.). “So we’re being supportive and careful that the people who come before the committee are ready to serve.”

Durbin added that he’s urging Senate Majority Leader Chuck Schumer to “move our judges as quickly as possible.” And the party is paying attention, despite the reality that Biden came into office with fewer vacancies than the man he defeated. If Democrats needed a reminder of the urgency of their judicial confirmation efforts, Senate Minority Leader Mitch McConnell seemed to provide it Monday with his pledge to block any Supreme Court nomination Biden made in 2024 if the GOP takes back the majority.

Trump inherited 112 vacant judicial spots, including a Supreme Court seat held open by McConnell in 2016. There are currently 82 vacancies to the federal bench, and Biden so far has announced 19 nominees.

“We’re moving very quickly,” said Sen. Richard Blumenthal (D-Conn.), a Judiciary panel member. “We will fill as many vacancies that there are. You can’t displace the Trump appointees, but we’ll fill all the vacancies.”

Underscoring Democrats’ emphasis on quality — including diversity — as equal to quantity in Biden’s judicial slate, his first 19 judicial picks include zero white men. In addition to Jackson — whose eventual selection would make good on Biden’s campaign pledge to tap a Black woman for the Supreme Court — the president has tapped the first Muslim judge confirmed to the federal bench in Zahid Quraishi, confirmed last week.

The push to confirm Biden’s judges comes as the federal judiciary becomes an ever more potent political issue for the left. During the 2020 Democratic presidential primary, expanding the Supreme Court became a litmus test for candidates. And after watching then-Majority Leader McConnell process Trump’s judges at a clip that only rivaled former President Jimmy Carter’s administration, progressive activists say Democratic senators are moving more quickly than in the Obama era.

“There was a lot of concern or complaint about the pace of President Obama’s nominees and a lot of that falls on Democratic senators for not having made recommendations quickly enough,” said Christopher Kang, chief counsel of the liberal group Demand Justice. “We’re not seeing that problem materialize right now.”

Iowa Sen. Chuck Grassley, the top Republican on the Judiciary Committee, predicted that Democrats could “easily” catch up to Trump on judges. Biden’s party is “processing them at about the same rate we were,” Grassley noted.

“I am concerned about getting the Biden priorities through,” said Sen. Mazie Hirono (D-Hawaii), citing infrastructure, voting rights and immigration reform. But she added that at the moment, she is “less anxious” about judicial confirmations.

But Sen. Josh Hawley (R-Mo.) described it as a “tall order” given the anomalous number of vacancies Trump had and the need to spend floor time processing nominations.

“You need a lot of runway,” Hawley said. “Sen. McConnell, when he was majority leader that was arguably I think his top priority. So he cleared the floor for it.”

Biden’s impact on the federal judiciary will only attract more attention in the coming weeks, with the Supreme Court term coming to an end and all eyes on Justice Stephen Breyer’s future. Although a Breyer retirement and subsequent Biden nomination would maintain the high court’s 6-3 conservative majority, progressives are quick to highlight that Democrats’ hold on the 50-50 Senate is fragile as they push for the 82-year-old justice to step aside to make room for a younger jurist.

Even as some Senate Democrats are privately hoping Breyer will step down, though, liberals are also wary that a public push in that direction could backfire — as many believed it did with Justice Ruth Bader Ginsburg in 2014. Ginsberg said when faced with retirement pressure that year that she didn’t believe Senate Republicans would permit confirmation of “someone like me”; Breyer, by contrast, would see a former clerk as his potential replacement if Jackson advances, as is widely expected.

Although Jackson received bipartisan support in the Senate Judiciary Committee, only three Republicans voted for her on the floor: Sens. Susan Collins (R-Maine), Lisa Murkowski (R-Alaska) and Lindsey Graham (R-S.C.). And while Jackson’s confirmation hearing didn’t set off any fireworks, members of both parties acknowledge that it’s not necessarily indicative of how a Supreme Court confirmation would play out, given the stakes of the high court.

“Do you mean, are we going to be as nasty as the Democrats were?,” asked Sen. John Cornyn (R-Texas.), a member of the Senate Judiciary Committee, who supported Jackson in committee but voted against her final confirmation. “There’ll be a thorough and searching examination into whatever nominee there may be.”

Democrats’ race to confirm Biden’s lower court judges in the coming weeks will benefit from a rules change that Senate Republicans established in 2019, using the so-called “nuclear option” to change the chamber’s rules with a simple majority vote. Citing Democratic filibusters, the GOP cut down the debate time to two hours from 30 hours for district court judges, allowing the majority to move substantially faster on confirmations.

In the 116th Congress alone, Republicans confirmed 121 district court judges, bringing their total to 174 district judges approved during Trump’s four years. After losing the House majority in 2018, Republicans adopted an even more intense focus on executive and judicial branch nominees. Democrats could find themselves going in the same direction if they keep the Senate but lose the House in the 2022 midterms.

As they describe the changed climate surrounding judicial confirmations, members of both parties point to McConnell’s personally keen interest in the issue during his time as majority leader. That single-minded drive led Democrats to denounce the Senate as a “legislative graveyard.”

The 2019 rules change isn’t the only Republican move to give a boost to Democrats’ judicial confirmation work. Durbin is also maintaining the same process as the GOP when it comes to so-called “blue slips,” which essentially grant home-state senators veto power over judicial nominees.

Like Grassley and Graham, his predecessors at the helm of the Judiciary panel, Durbin is keeping blue slips for district court nominees but scrapping them for circuit court picks who oversee multiple states. Progressives are pushing to do away with the tradition altogether, but that proposal has yet to gain traction.