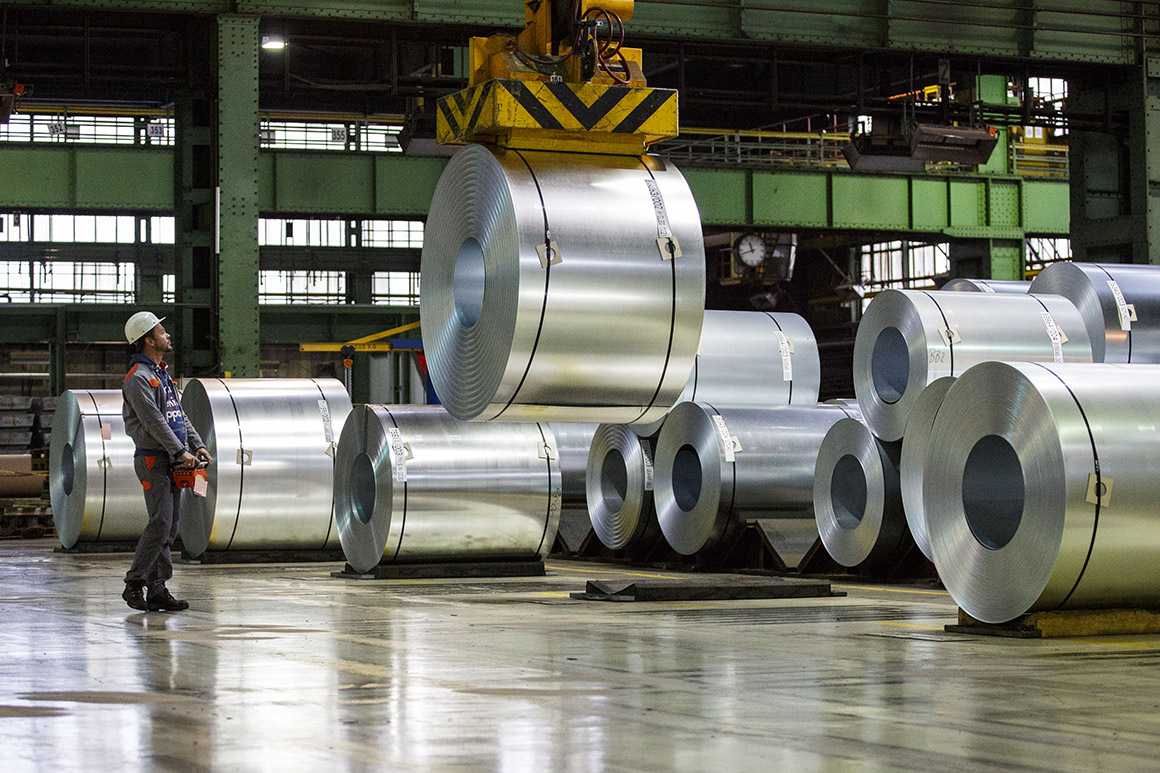 European leaders are expected to press President Joe Biden in meetings starting this week to scrap the steel and aluminum tariffs that former President Donald Trump slapped on them. That will require reaching a deal that appeases Biden’s key constituencies at home – namely steelmakers and unions.

Senior U.S. and European officials recently started negotiations to remove the duties in the latest sign that the Biden administration wants to rebuild relationships with key allies. But getting rid of the European tariffs won’t solve the problem that worried Trump and his predecessors: the global glut of steel coming largely from China, which produces more than half of the world’s supply.

Before lifting the tariffs on the European Union, the administration will have to show steelworkers and other constituencies back home that Europe and the U.S. can act in concert to reduce excess capacity in China that is driving down steel prices globally.

“The conversation is much less, when it comes to steel, about the bilateral relationship and the tariffs, and it is much more about what’s the strategy with China,” said Chad Bown, a senior fellow at the Peterson Institute for International Economics.

The tariffs are popular with steel and aluminum companies and, perhaps more importantly, the unions representing their workers. Many of them live in vital swing states like Pennsylvania. Biden’s own administration has trumpeted the tariffs as “effective” at uplifting the domestic steel industry and its workforce.

“These are important constituencies for the Biden administration, so to just pull the rug out from under them without something significant in its place that’s enforceable would be really, really difficult,” said Dennis Shea, a Bipartisan Policy Center fellow who served as Trump’s deputy trade representative and ambassador to the World Trade Organization.

A Commerce Department spokesperson told POLITICO that U.S. officials are “engaged in constructive discussions” with EU counterparts on ways to address the steel problem. When asked about Biden’s upcoming meetings in Europe, the spokesperson simply stated: “We welcome opportunities to continue this dialogue at all levels of government to help ensure the viability of our critical industries.”

Still, Biden is making some inroads in winning over Europe’s help. Ahead of this week’s G-7 meeting of wealthy economies, the nations’ trade ministers vowed to tackle issues that have led to a glut of steel and said it was “paramount” that other nations take part in the effort.

“We believe that dialogue, transparency, and cooperation at a global level represent a crucial means to address the imbalances created by worsening excess capacity,” a joint statement read.

That cooperative tone is a shift from the Trump years.

In the meantime, the Biden administration is keeping in place the 25 percent tariff on steel and 10 percent tariff on aluminum against European imports, even as some trading partners like Canada and Mexico have had theirs lifted.

There are outside forces also pressuring officials to quickly reach a deal to remove the tariffs. In the U.S., powerful industry groups like the Chamber of Commerce and the National Foreign Trade Council have lobbied Biden to scrap the steel and aluminum tariffs, which they assert have led to higher prices for goods that use steel and longer wait times for deliveries.

The European Union three years ago also retaliated against the Trump steel tariffs by slapping duties on prized American exports like orange juice, bourbon, Harleys and a host of industrial goods. Europe had threatened to double those duties on June 1 but agreed to hold off while negotiations continue.

Europe is facing its own domestic pressures as well. Both the U.K. and EU must soon decide whether to continue restricting steel imports from other countries, a move put in place in 2018 after Trump’s tariffs. Their steel and aluminum industries are pushing for those measures to continue so long as U.S. tariffs are in place, even if it risks upsetting other trading partners.

Underlying all those tensions remains what to do about China’s excess steel production, which has vexed administrations at least since President George W. Bush.

China produced five times more steel in 2019 than it did in 2000, according to OECD data, and it now produces more than 50 percent of the world’s supply. Even when the U.S. and other countries impose tariffs on imports, Chinese steel is often shipped to other countries that process it and sell it on the world market as their own, thus circumventing the restrictions.

Thomas Conway, international president of the United Steelworkers, said during a recent Washington event that the U.S.-EU negotiations need to solve the issue of China selling its steel through other countries to evade tariffs, what he called the “Whac-A-Mole” problem.

In 2016, the Obama administration and other G-20 nations established the Global Forum on Steel Excess Capacity, an international body for countries to share information about their production and work together to cut back on the oversupply. But the Trump administration criticized that body for failing to hold top offenders like China accountable.

In March 2018, Trump decreed a 25 percent tariff on steel and a 10 percent tariff on aluminum of imports from almost all countries, relying on what had been a little-used provision in Section 232 of the Trade Expansion Act of 1962. The section allows for tariffs if cheap foreign imports erode U.S. national security, which Trump asserted steel and aluminum imports had done.

Trump’s decision divided senior members of his administration and Republicans in Congress but appeased a contingent of union workers and manufacturers that helped win him the White House. Indeed, Trump first announced the tariffs during a White House meeting surrounded by steel and aluminum executives.

“There’s a lot of, I think, incorrect cynicism around 232, that it somehow falsely propped up the steel industry, but that’s not the case,” said Leon Topalian, chief executive officer of North Carolina-based Nucor, the largest steel producer in the U.S. “It was to bring countries to the negotiating table and broker better deals.”

But critics inside and outside of the White House argued that it was a blunt instrument that would do more harm to the country’s allies than its adversaries. The top sources of foreign steel at the time were Canada, South Korea, Mexico, Japan and Germany, with China producing a much smaller share of U.S. imports.

The Trump administration subsequently exempted Brazil, South Korea and Argentina from steel tariffs after those nations agreed to limit their exports to the U.S. Australia was also granted an exemption. Mexico and Canada got reprieves from the tariffs as part of talks to establish the U.S.-Mexico-Canada Agreement.

Now Biden has to reach a deal with Europe. But what can be done about China’s production that hasn’t already been tried remains the key question.

At the moment, the Global Forum on Steel Excess Capacity can do little to help Biden. China and India have abandoned the group, leaving it without the world’s top steel-producing nations.

The U.S. Chamber of Commerce, which wants Biden to lift the tariffs, suggested last month that the administration put renewed emphasis on the forum and work with allies to monitor and prevent surges in imports, similar to the arrangement the U.S. has with Canada and Mexico.

“I don’t think 232 is going to stay in place forever, but I think it’s an important tool right now,” said Topalian, who was recently named chairman of the American Iron and Steel Institute, a trade association. “We’ve got to continue to work with the administration on how … we ensure that there’s a level playing field.”