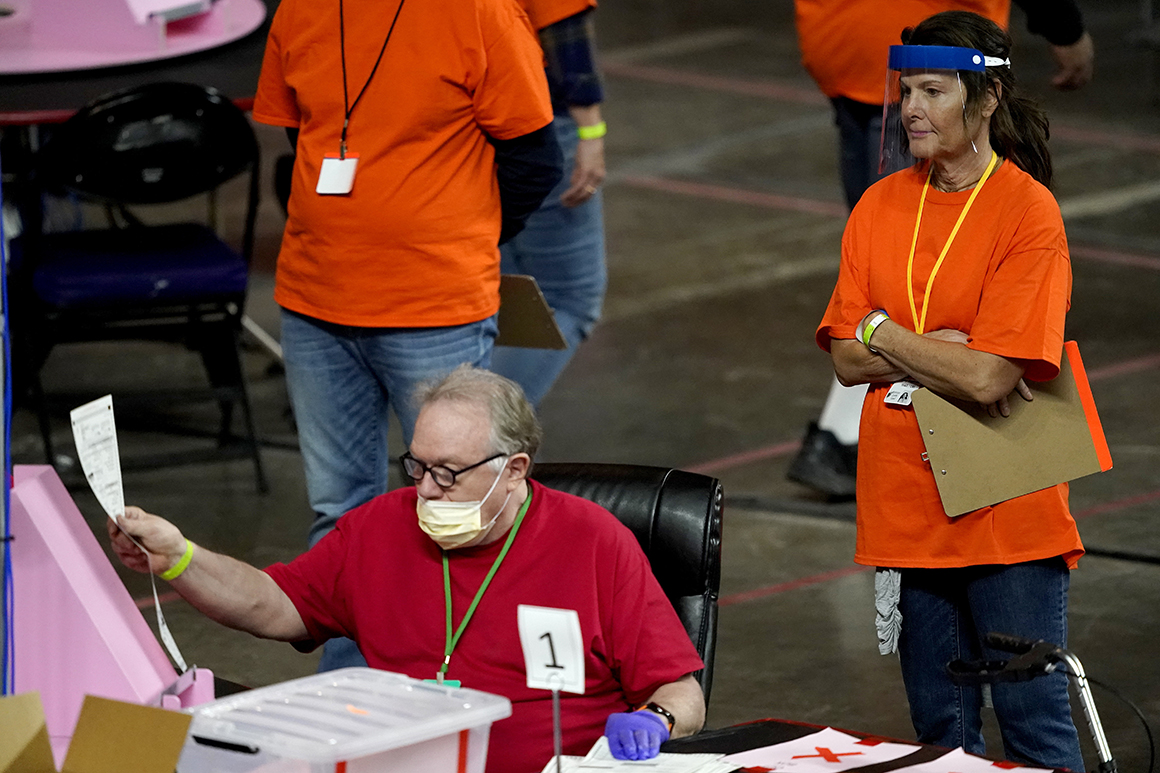 A months-long examination of all the ballots from the 2020 election in Arizona’s most populous county may be winding down soon. But now the state is spreading the “audit” playbook across the country.

Supporters of former President Donald Trump — fueled by Trump’s false claim that he did not lose the 2020 election — are behind a new push to review the results in states including Michigan, Georgia, Pennsylvania and Wisconsin. The new drive is worrying state election administrators, who say the efforts will further inflame conspiracy theories and erode faith in the American democratic system.

The burden of these reviews could fall on the shoulders of state and local election officials, further complicating a field where many are worried about a brain drain due to exhaustion and threats workers faced in the aftermath of the 2020 election.

The efforts in Arizona began in late April, when the Republican-controlled state Senate hired private firms to review the 2.1 million ballots cast in Maricopa County, which Biden narrowly carried en route to flipping the state.

The process in Arizona, headed by an inexperienced firm called Cyber Ninjas, has been mired in controversy. Supporters call the effort an “audit,” but it is nearly universally derided by election professionals as a ham-fisted fishing expedition that doesn’t rise to the standards of an actual, professional audit. It’s also been costly: County officials announced this week that they won’t reuse any of the voting equipment that was examined during the review, which could cost taxpayers millions of dollars.

Arizona Secretary of State Katie Hobbs, a Democrat, and the Republican-controlled Maricopa County government have vociferously opposed the review. And Democratic election administrators, along with many nonpartisan and some Republican officials, have begun to speak out about the dangers of the approach spreading across the country and are working to stymie the drive. 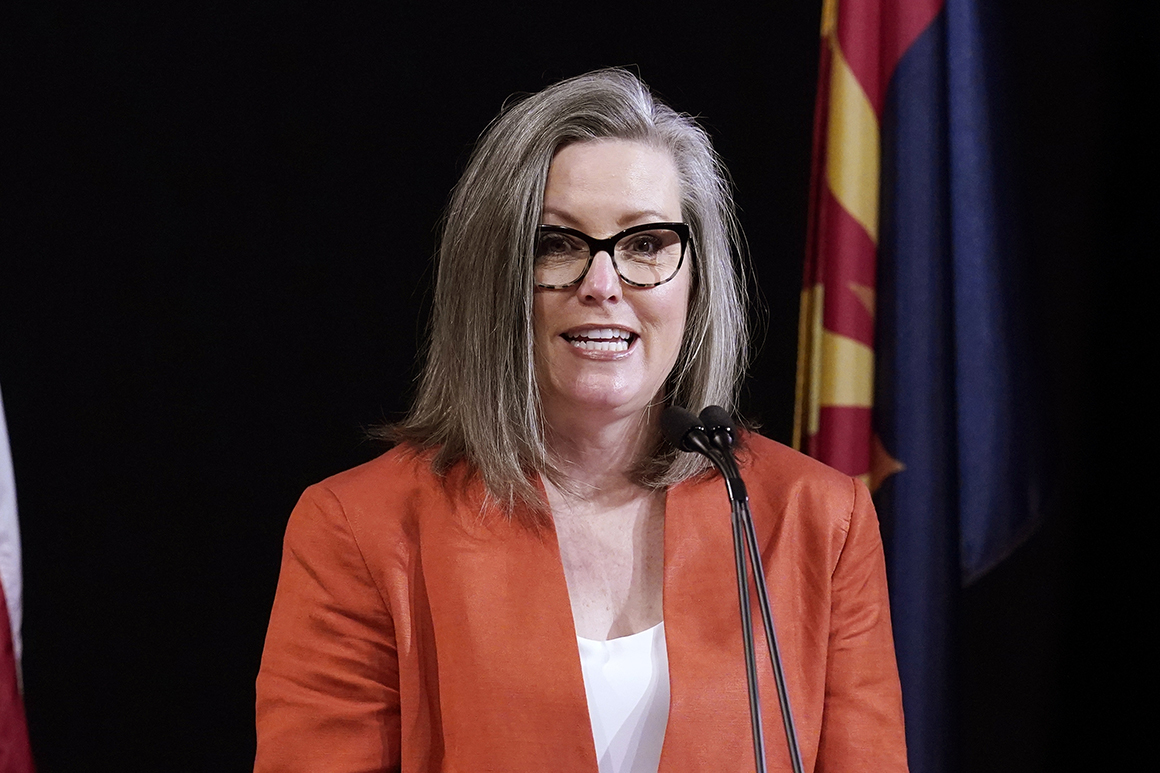 “Before this audit came to Arizona, folks who were behind it were trying to find a way to get a foothold anywhere they could,” Hobbs said. “And Arizona happened to be the place that they could. And we know that they’re looking for ways to do it in other states.”

Trump has publicly fixated on the effort in Arizona, regularly putting out statements praising it and insisting it will show he won an election he lost. He also praised the Arizona state senators for their efforts during his first post-presidency rally in Ohio over the weekend, eliciting a cheer from the crowd.

“They are going to issue a report at some time in the not too distant future, it will be very interesting to see,” Trump said. “A lot of states have gone to watch them, and they’ve come away with praise, real praise. So let’s see how that turns out. Arizona: It is a big deal.”

The local coliseum that has hosted the examination in Arizona has been a pilgrimage site for Republican elected officials and candidates who have promoted Trump’s fraud claims. The Arizona Republic has tracked roughly 20 Republicans from 10 states who have visited Veterans Memorial Coliseum during the review.

Now, efforts are underway to bring audits to counties and states across the country — often at the urging of the former president. Trump has publicly called for audits in numerous states and has politically threatened Republicans who have not backed those calls, especially in critical swing states that he narrowly lost in 2020.

In Michigan last week, a Republican-led state Senate committee found no evidence of fraud in the state. “Our clear finding is that citizens should be confident the results represent the true results of the ballots cast by the people of Michigan,” the report concluded.

A letter from Michigan state Sen. Edward McBroom, a Republican, that accompanied the report said he believed “another audit, a so-called forensic audit, is not justifiable,” particularly in Antrim County, a traditionally conservative county that’s been at the center of conspiracies that the election was stolen from Trump.

McBroom, who did not respond to a request for comment, did, however, write that he is “keeping a close eye on the legislatively-initiated forensic audit in Arizona and will continue to ask questions regarding other election issues I feel are not settled.” He wrote he could change his recommendation about an audit in the state based on the results in Arizona, or further investigation in Michigan. (Trump put out a statement attacking McBroom.)

The push in Michigan extends beyond Antrim County. The board of commissioners of Cheboygan County, Mich., voted 4-3 last week to request an audit of the county’s results, asking the state elections director to approve it. Trump won the country overwhelmingly.

“There is no information or gain that can be made from this audit. Things will stand as they are,” Cheboygan Commissioner Michael Newman, a Republican and one of the three commissioners who voted against requesting an audit, said in an interview.

The commissioners who voted for an audit did not respond to interview requests.

Newman, who said he believes Biden was duly elected, said there was a local pressure campaign to push for an audit, but that constituents in his district urged him to vote against it.

“They want to see us all changed so we’re not seated anymore, and they want to go after our county administrator,” Newman said of activists pushing for the audit.

And in the state legislature, freshman Republican state Rep. Steve Carra recently filed legislation calling for a “forensic audit” of the results. Carra, who said he believed there was substantial fraud during the 2020 election, is primarying Rep. Fred Upton (R-Mich.), one of the Republicans who voted to impeach Trump. He said the election results are an animating factor among Republicans.

Similar pushes have materialized elsewhere. Pennsylvania state Sen. Doug Mastriano has boosted his political profile by becoming one of the vocal proponents of Trump’s lies about the election, and is considering a run for governor in the state. Mastriano, who visited the Arizona site, has pushed for an audit in his home state — and Trump has attacked Republican leaders in Pennsylvania who have not backed him, even name checking Republican state Senate leader Jake Corman.

“Other State Senators want this Forensic Audit to take place — immediately,” Trump said in a mid-June statement. “I feel certain that if Corman continues along this path of resistance, with its lack of transparency, he will be primaried and lose by big numbers.” 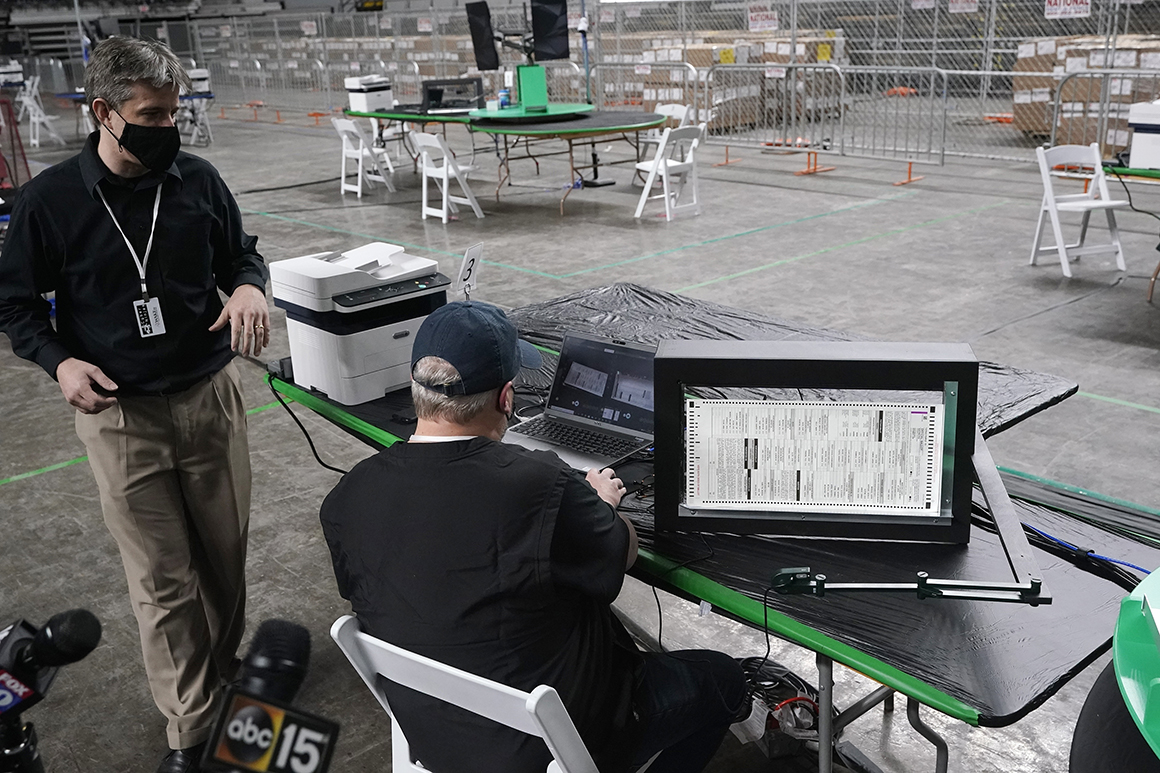 In Georgia, conspiracy theories about Trump’s loss persist, despite the fact the state saw its votes recounted twice in 2020. Republican State Party Chair David Shafer, who also toured the Arizona site, has praised the calls for an audit in his home state.

“The vast majority of Republicans believe that there were irregularities in the last election that have not been fully investigated,” Shafer said on the sidelines of the state party convention earlier this month.

A Georgia state judge also recently dismissed most of a lawsuit that sought to review absentee ballots in Fulton County, home to Atlanta. The suit was by plaintiffs who were trying to find fraud in the state.

And in Wisconsin, state Assembly Speaker Robin Vos has hired retired police officers to investigate “potential irregularities and/or illegalities” in the election. Two Assembly Republicans who traveled to Arizona have also said they’d like to see a similar undertaking in their state, and Trump has recently attacked Vos and other Republicans in the state for “actively trying to prevent a Forensic Audit,” although backlash to Vos at the state convention was muted.

A Trump adviser recently told POLITICO that the former president remains “adamant about doing audits” and “is going to keep up pressure on Republicans to have the courage to do it.”

The particularities of the process in Arizona have also concerned election experts, who fear that activists elsewhere will try to mirror or copy a flawed approach from the state.

The so-called audit has crossed deep into conspiratorial territory. Workers had checked for bamboo fibers in ballots (a nod to a baseless theory that ballots may have been sent from Asia) and used UV lights on ballots, potentially for (non-existent) watermarks. Cyber Ninjas itself is owned by a man who has promoted the #StopTheSteal conspiracy theory, which is based in the belief that Trump actually won, and recently appeared in a conspiracy-filled film about the election.

“It was clear they had no idea how elections are administered,” Morrell, who served as an observer, said. “That’s the concern, is that we’ve suddenly left this place where we follow the rule of law, and it’s like the Wild Wild West.”

The effort, or at least its first stages, appears to be winding down. The pseudo-official Twitter account tweeted that the “paper examination and counting” of the nearly 2.1 million ballots concluded on Friday. But Ken Bennett, a former Arizona Republican secretary of state who has served as a liaison for the effort, told the Associated Press that a report is still weeks to months away.

(A request for an interview sent to Bennett and a second email address associated with the effort was acknowledged repeatedly by a staffer, but nobody was made available.)

Elections experts are already warning that any conclusion drawn from the Arizona review will be untrustworthy. A report from the nonpartisan States United Democracy Center, co-authored by former Kentucky Republican Secretary of State Trey Grayson and Barry Burden, the director of the Elections Research Center at the University of Wisconsin–Madison, ripped into the Arizona effort as being poorly run and not transparent.

Grayson also said fixation on 2020 will hurt Republicans in the long run. “I want to be involved in this [report] because I’m worried,” he said, noting he is an active party member and just recently attended a fundraiser for a Republican senator. “I want Republicans to see, ‘Here’s one of us who’s telling you don’t waste your time, don’t waste your money. You’re undermining confidence. It’s backfiring.’”

Trump and his supporters have also glommed on to legitimate efforts elsewhere, quickly abandoning them when they did not turn up evidence of fraud the former president wanted.

A bipartisan group of New Hampshire lawmakers authorized an audit of a state House of Representatives race after a recount showed a Republican candidate actually received hundreds more votes than initially tallied. The New Hampshire audit was extremely unusual, election experts say, because it took place well after the election, and there were no established laws for how to conduct a post-election audit in the state. The major difference between Arizona and New Hampshire? This audit was run by well-respected election professionals.

Trump initially praised the audit as part of the “incredible fight to seek out the truth on the massive Election Fraud which took place in New Hampshire and the 2020 Presidential Election.”

But the actual culprit was not a conspiracy of fraud, but instead a likely combination of tabulators that incorrectly read poorly-made folds in ballots, voters casting too many votes in certain races, and dusty machinery. Trump did not issue a public proclamation when a more innocuous explanation was laid out.

“That’s kind of why I did this crazy thing, because I felt someone had to,” said Mark Lindeman, who helped run the New Hampshire audit and is the acting co-director of Verified Voting, citing threats to election workers that have stemmed from conspiracy theorists.

“I thought either someone, if I may say this about myself, responsible would do the work,” he continued. “Or deeply irresponsible people — and, in fact, the same people who have done the work in Maricopa County — would have done it.”