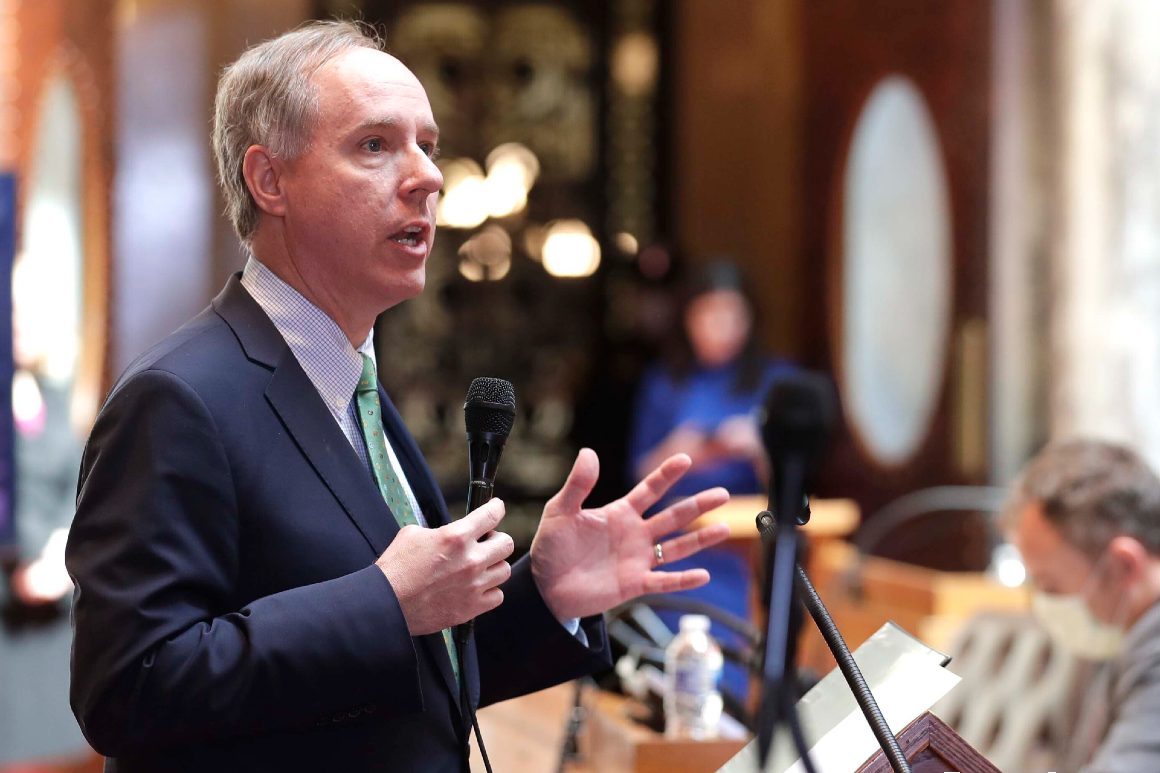 WISCONSIN DELLS, Wis. — It could have upended the Wisconsin Republican Party’s annual convention, given Donald Trump’s hold on the GOP. Just as the state party gathered this past weekend, Trump issued a statement tearing into the state Assembly speaker, Robin Vos, and two other Republican lawmakers for doing too little to promote his election conspiracies.

But in a rare setback for his post-presidential interventions in the GOP, Trump in Wisconsin appeared to shoot a blank. When Vos and Devin LeMahieu, the state’s Senate majority leader, took the stage on Saturday in front of some of the party’s most fervent pro-Trump activists, it was as though Trump had said nothing at all. There were no boos. Vos drew applause. Convention-goers dismissed an effort to censure him.

In Wisconsin at least, Trump failed to set off the same intra-party chaos that has marked his efforts elsewhere. Worse for him, despite the former president’s harsh personal criticism, there were signs his comments were dismissed with a roll of the eyes.

“I just think it’s been going on for so long that people are kind of tired of it,” said Tony Kurtz, a GOP assemblyman from rural Juneau County, which went for Trump last year by nearly 30 percentage points.

For more than seven months since he lost the election, Trump has engaged in a crusade against Republicans who crossed him, an effort he invigorated with a rally in Ohio on Saturday, where he traveled to campaign against Rep. Anthony Gonzalez, who voted to impeach him earlier this year. In most cases, the Republican base has responded zealously. But here, at a convention center attached to a water park, the lack of interest from the rank-and-file suggested some of the first, tentative signs of weariness of Trump’s smash-mouth political act.

Even Sen. Ron Johnson, an unfailing Trump ally, broke with the former president’s criticism of Johnson’s home-state lawmakers, dismissing Trump’s suggestion that they could be primaried.

“I don’t think that represents much of a threat, quite honestly,” Johnson said, describing Vos and his colleagues as “doing a pretty good job.”

Trump remains wildly popular among Wisconsin Republicans — no less than in other states — and the belief in his false claim that the election was rigged is widespread, underpinning a raft of elections-related legislation passed by Republican lawmakers in the state this month. At the state convention, activists cheered for Trump when organizers played a recorded message in which Trump repeated his falsehood that he carried the state in November. The convention included a panel on election law changes, the state party homepage prominently features an “election integrity dashboard” and delegates carried tote bags that read “Defend secure elections.”

Brian Jennings, chair of the GOP in Florence County, a sparsely populated Trump stronghold in northern Wisconsin, said “Trump is the Republican Party right now,” and on the sidelines of the convention, several delegates said Trump was right that Vos hadn’t done enough to overturn the results of the election.

But unlike in states like Georgia and Arizona, there wasn’t widespread interest in purging the state’s Assembly speaker for it — a departure from Trump’s dominion over the Republican Party’s apparatus in the states.

“That’s Wisconsin for you,” said Helmut Fritz, a delegate from Milwaukee who sits on the state party’s credentials committee. “Trump isn’t the dictator.”

In part, Vos’s avoidance of punishment is the result of shrewd politics. Though he has frustrated Republicans who want Wisconsin to pursue an Arizona-style review of the election, Vos is neither a Trump critic nor a defender of the November election’s integrity in the mold of Georgia Gov. Brian Kemp or Utah Sen. Mitt Romney. He has infuriated Democrats by hiring three retired police officers to investigate “potential irregularities and/or illegalities” in the November election. And at the convention, he announced that a conservative former state Supreme Court justice, Michael Gableman, will oversee the effort.

Following that news — which an operative familiar with the arrangement said was in the works for weeks — Trump said at his rally in Ohio that “I hear now that Wisconsin is looking very, very seriously” into the election “and I respect Wisconsin so much.”

But for the purposes of the Wisconsin state convention, he had all but invited attendees to engage in a pile-on. In his statement issued the night before Vos spoke, Trump, seeking to stoke grassroots outrage, accused Vos, LeMahieu and state Sen. Chris Kapenga of “working hard to cover up election corruption … actively trying to prevent a Forensic Audit.”

“Don’t fall for their lies!” Trump wrote. “These REPUBLICAN ‘leaders’ need to step up and support the people who elected them by providing them a full forensic investigation. If they don’t, I have little doubt that they will be primaried and quickly run out of office.”

On Sunday, a Trump adviser said the former president remains “adamant about doing audits” and “is going to keep up pressure on Republicans to have the courage to do it.” 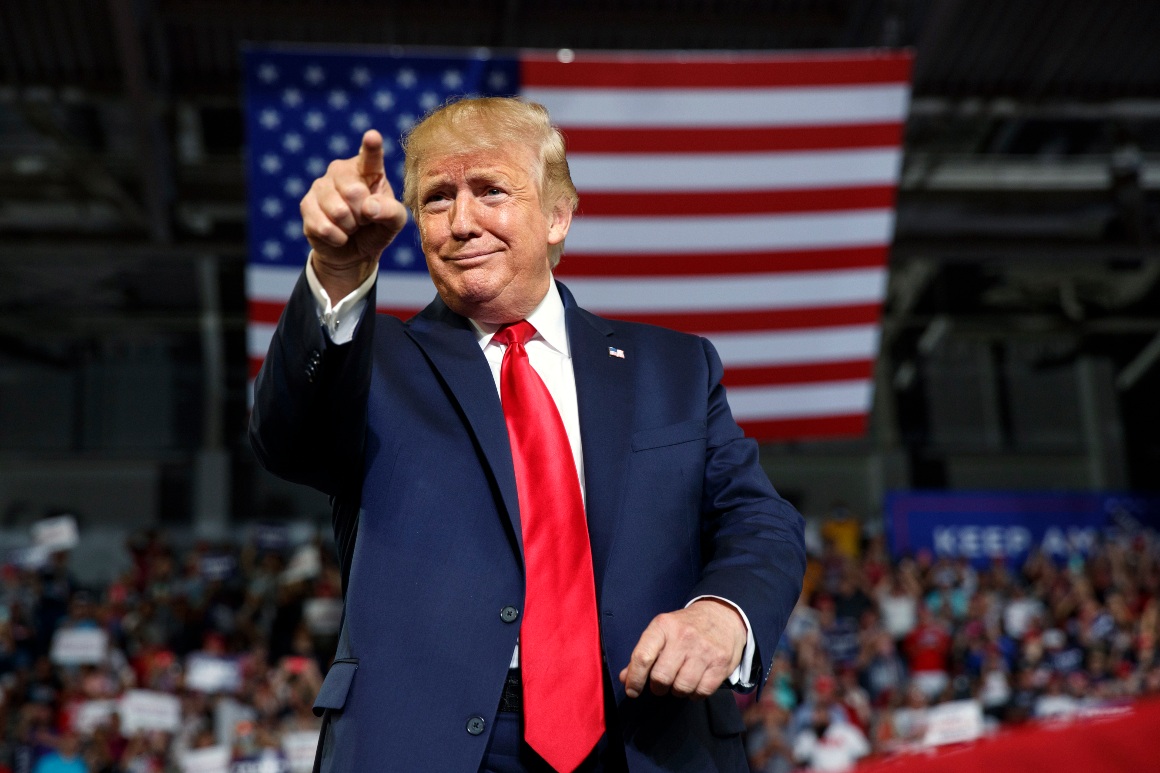 So far this year and in other states, Trump’s broadsides against Republicans deemed insufficiently loyal to him have been met with enthusiasm from activists. Utah Republicans heckled Romney, an outspoken Trump critic, at their state convention in May. Republicans in Georgia booed Kemp. The GOP governor of Arizona, Doug Ducey, was censured by his party for his lack of fealty to Trump.

At the convention in Wisconsin, it was a different story. One delegate deleted Trump’s statement from his phone, saying he wished Trump would “shut up, and I’m a big Trump supporter.” Another delegate said he hadn’t even bothered to read it.

David Blaska, a former Dane County supervisor who worked as a speechwriter for former GOP Gov. Tommy Thompson, said “a lot of people still believe the election was stolen.” But the fact they weren’t jeering Vos, he said, was a “good sign.”

Standing at the back of the convention hall, Blaska said the party is “hopefully moving on.”

Vos said he wasn’t surprised by the reception, citing his relationship with activists dating back to before Act 10, the explosive legislation advanced by then-Gov. Scott Walker in 2011 that limited public employee collective bargaining rights. Trump, he said, was “misinformed.”

But in a sign that Trump’s supremacy isn’t absolute, Vos went further than many other Republican have been willing to, aligning himself with former House Speaker Paul Ryan, the Wisconsin Republican who in a speech last month clashed with Trump when he said, “If the conservative cause depends on the populist appeal of one personality, or of second-rate imitations, then we’re not going anywhere.”

“The things that President Trump stands for — a strong America, lower taxes, more freedom — everybody agrees with that,” Vos said in a brief interview off the convention floor. “But I will say … I agree with Paul Ryan saying that our movement should never be about one person.”

Trump, Vos said, “did a lot of good things. But so could [Florida Gov.] Ron DeSantis or [Florida Sen.] Marco Rubio or you name the candidate. They all could do good things, too.”

One important distinction in Wisconsin is the state party’s history — it is more firmly rooted than most. Ten years ago, Wisconsin was the Republican Party’s leading light. Ryan was ascendant, soon to become the GOP’s vice presidential nominee in 2012, then House speaker. Walker was beginning his first term as governor, waging a war on unions that would serve as a model for conservatives across the country. The state’s former GOP chair, Reince Priebus, ran the national party.

Today, the state party has been set back. After cresting in 2016, with Trump’s upset of Hillary Clinton, Republicans here lost the governorship in 2018, then saw the state flip to Joe Biden two years later. Johnson, the state’s top elected Republican, has not yet said if he’ll run for reelection (On Saturday, he told reporters he won’t announce a decision for “quite some time.”)

“It’s still a place [people] look to,” Walker said. “But it’s usually for things that have happened in the past.”

Yet a comeback for the GOP in Wisconsin could be just a year away. Trump lost the state by fewer than 21,000 votes in 2020. Republicans still control the state legislature, and the party has a credible chance of unseating Tony Evers, the Democratic governor, next year.

“I think Wisconsin will be back in terms of being a focal point nationally, because you’ll have one of the most competitive gubernatorial elections, and probably at least nationally more importantly, you’re going to have a Senate race that could very well determine who holds the Senate for the next several years,” Walker said.

He said the party has “a tremendous opportunity not to be wed to any one individual, and I say that fully acknowledging that on policy what President Trump did was phenomenal.”

On politics, however, his record was mixed. In November, Wisconsin served as a blaring example of Trump’s difficulties in the suburbs, with the former president juicing turnout in rural areas but underperforming in metro areas. Convention-goers repeatedly mentioned how Republicans running in the state’s five Republican-held House seats outperformed Trump in their districts.

In a swing state with a recent history of highly competitive elections, convention delegates and strategists repeatedly cited an imperative to rally together, and also to avoid needlessly alienating large swathes of otherwise attainable voters. Other states, said a Republican strategist at the Wisconsin convention, “aren’t used to a decade of battles where every yard matters” and where “f—ing with each other” internally can cost the party an election.

“The stuff that’s going on nationally, we’ve experienced it longer,” said Jennie Frederick, president of the Wisconsin Federation of Republican Women. “I feel like we know who the enemy is, and it’s not us.”