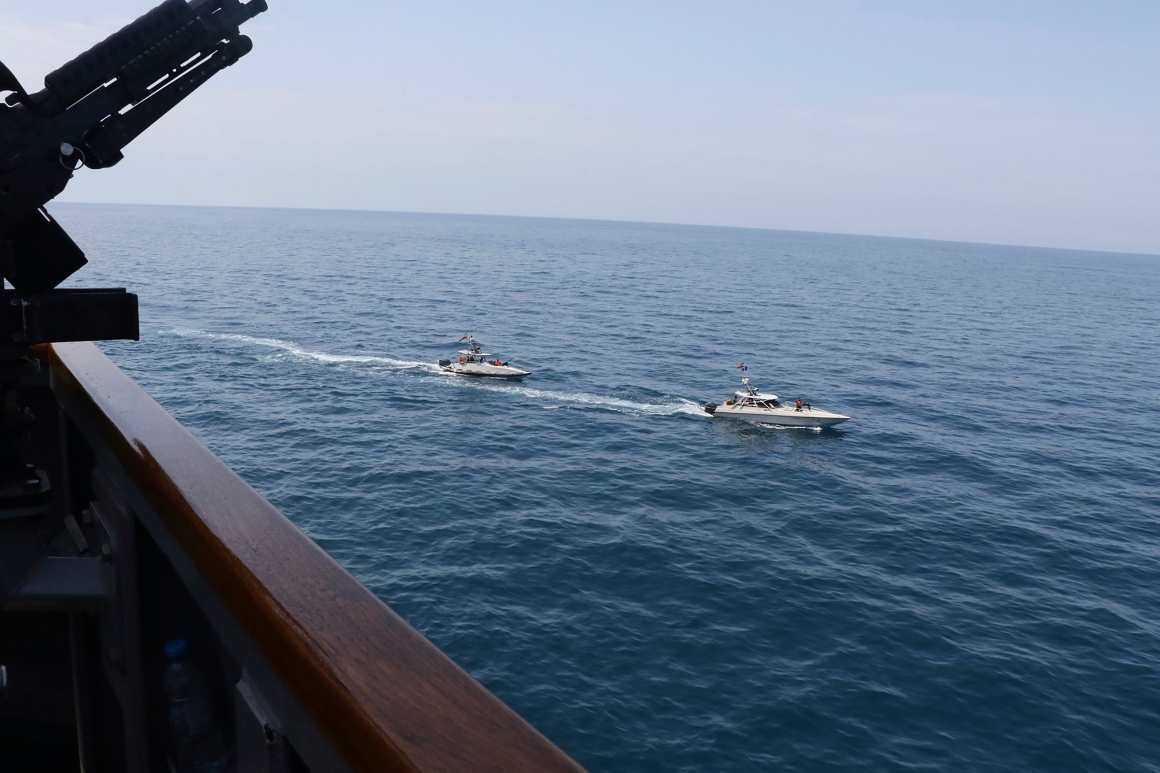 The Biden administration is privately urging the governments of Venezuela and Cuba to turn away two Iranian naval ships believed to be carrying arms intended for transfer to Caracas, as the vessels make their way across the Atlantic Ocean this week, according to three people briefed on the situation.

A weapons transfer from the Iranian ships to either Venezuela or Cuba would be a provocative move in direct defiance of U.S. warnings. The mere completion of a journey across the Atlantic would be a significant step for Iran’s navy, demonstrating the military’s capabilities after failed attempts in the past.

The White House is pressuring Caracas and Havana over diplomatic channels not to allow the vessels to dock in their countries, said two defense officials and a congressional official, all of whom spoke on condition of anonymity to discuss sensitive negotiations. Biden officials are also proactively reaching out to other governments in the region to ensure they will turn away the ships, the congressional official said.

Meanwhile, Caracas is trying to leverage the situation to gain relief from U.S. sanctions imposed by the Trump administration, according to two additional people familiar with the situation. U.S. intermediaries have communicated to Venezuelan officials that letting the ships dock there would make it less likely that the U.S. would provide the country with sanctions relief.

However, Tehran is pushing forward with the journey in the hope of pressuring Caracas to allow the vessels to dock, according to a defense official.

The U.S. national security community is concerned about a potential weapons transfer from Tehran to Caracas. The intelligence community has evidence that one of the ships, the Makran, is carrying fast-attack boats, likely intended for sale to Venezuela, according to a second defense official and another person familiar with the intelligence on the ships.

Satellite imagery of the ship from early May provided by Maxar Technologies showed seven such vessels placed on its deck, but it was unclear whether those boats were still aboard when the ship began its journey.

While there is no evidence that the Makran is carrying ballistic missiles, last year the Trump administration warned Tehran against delivering long-range missile shipments to the Nicolas Maduro regime, and threatened to destroy the weapons if they ended up in Venezuela.

“The transfer of long-range missiles from Iran to Venezuela is not acceptable to the United States and will not be tolerated or permitted,” said Elliott Abrams, the former State Department special representative for Iran and Venezuela, at the time.

Representatives for the White House, State Department and Pentagon did not immediately respond to requests for comment. However, last week Pentagon spokesperson John Kirby warned that a new arms delivery “would be a provocative act and a threat to our partners in this hemisphere.” He added that the U.S. reserves the right “to take appropriate measures — in concert with our partners — to deter the delivery or transit of such weapons.”

U.S. officials have been monitoring the ships’ progress over the past two weeks from the Persian Gulf, down the east coast of Africa, around the Cape of Good Hope, and now heading northwest across the Atlantic. The Makran, a former oil tanker converted to a forward staging base, is accompanied by the Sahand, Iran’s newest frigate.

As of Wednesday morning, the ships had completed more than half the journey from Iran to Venezuela, and were steaming slowly northwest more than 1,000 miles from Cape Town, South Africa, according to the second defense official, who was briefed on their position. This is the first time the Iranian navy has rounded the cape or gotten this far across the Atlantic.

Lawmakers receiving regular briefings on the matter have been publicly pressuring the Biden administration to work to deter the ships.

“This does not look like an oil or fuel cargo delivery,” Senate Intelligence Committee Vice Chair Marco Rubio (R-Fla.) wrote on Twitter. “This has all the markings of delivery on [sic] an arms sale (such as fast attack boats) to Venezuela coupled with the opportunity to project a message of strength to the Biden administration.”

Farzin Nadimi of The Washington Institute for Near East Policy, who focuses on Iran’s naval strategy and defense industries, said his greatest concern regarding the possible delivery of fast attack boats to Venezuela would involve training.

“If Iran helps Venezuela develop tactics similar to those practiced by the [Islamic Revolutionary Guard Corps] in the Persian Gulf region, that could have in my view serious repercussions in the future,” he said.

Kirsten Fontenrose, an Atlantic Council fellow and former National Security Council official during the Trump administration who focused on the Middle East, said the expiration of the UN arms embargo on Iran means this move could be followed by more exports of military equipment.

“The threat is the precedent it sets, because the UN arms embargo is no longer on Iran and they’re free to import and export,” she said. “This could be the first of many transfers we see. It allows Iran to proliferate their model of what I call zero to hero, where they arm failing governments or proxy groups and make them larger than they’re capable of being on their own, and they create these affiliates around the world that are able to threaten American interests.”

Fontenrose added that America’s transatlantic allies are unlikely to become particularly involved in U.S. efforts to manage the growing challenge.

“We’ll have to deal with this on our own,” she said.