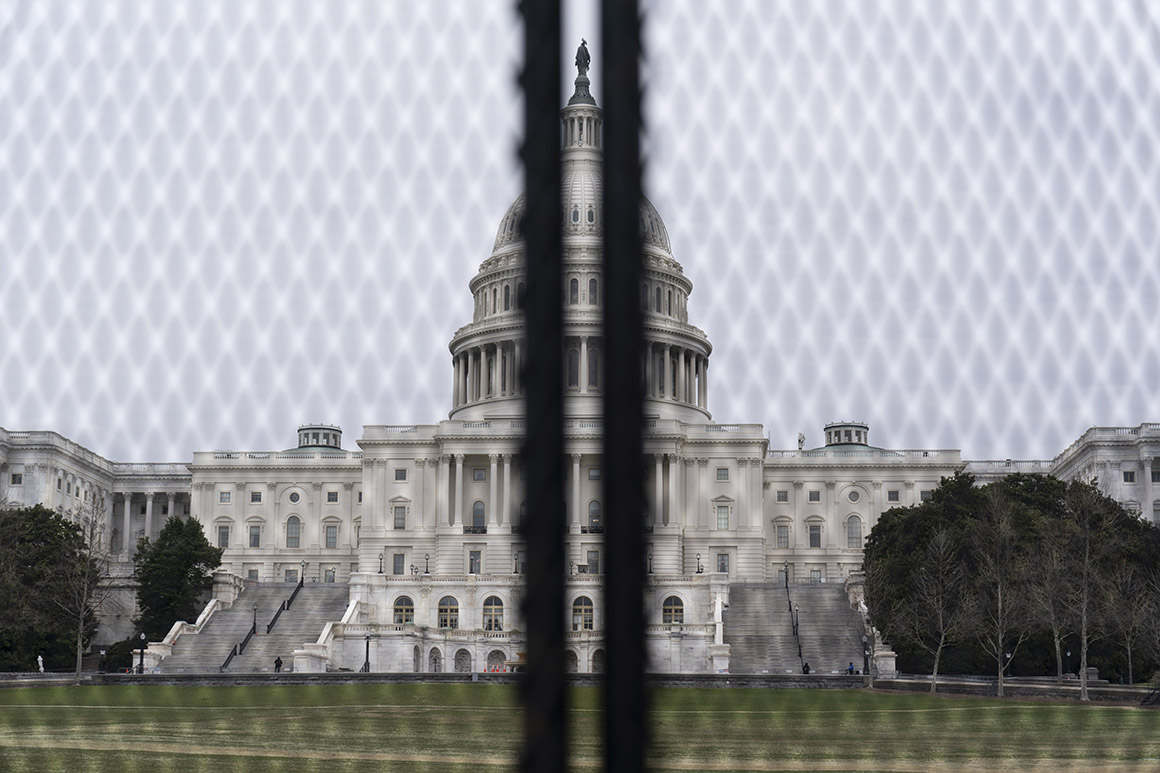 Members of Congress can rarely reach bipartisan consensus on anything, but many of them agree that the Capitol fence should go. That doesn’t mean it will.

The debate over whether to keep the fence has dogged the Capitol after the insurrection on Jan. 6, as lawmakers try to strike a balance between providing security and restoring open access to the complex as visitors return. The fence is unpopular with both parties, and the money to maintain it is uncertain at best. Still, Hill security officials would have to reach tough decisions on fortification before bringing down the barrier — calls they don’t appear prepared to make any time soon.

The outer enclosure has already receded — with the remaining barrier surrounding only the Capitol building itself — and the concertina wire topping the remaining fencing has been removed. Thousands of National Guard troops who patrolled the perimeter alongside Capitol Police officers have departed.

The fate of the existing inner barrier, however, is a mystery.

The roughly $1.9 billion emergency funding package passed by the House last month set aside millions of dollars for future security upgrades around the Capitol complex, such as a “retractable” fence, while also banning the use of its funds for construction of permanent fencing. But that bill is unlikely to advance in the 50-50 Senate, where Republicans have balked at the price tag.

Top lawmakers are skeptical of further fortifying the Capitol, and it’s unclear what security upgrades would be possible without the cash included in the House-passed bill. Senate Appropriations Committee Chair Patrick Leahy (D-Vt.) said his panel would consider more security measures and added, “I want the Capitol secured, and I just don’t want it to look like a fortress.”

Senate Majority Leader Chuck Schumer, when asked about the status of the fence last week, deferred to recommendations from Senate Sergeant at Arms Karen Gibson. The New York Democrat added that “we need to protect the Capitol, but it shouldn’t be an armed camp, plain and simple.”

Even lawmakers who opposed the fence are agnostic about the timetable. Sen. Chris Van Hollen (D-Md.), who introduced legislation to ban permanent fencing around the Capitol, said in a brief interview the existing fencing should come down “at some point.”

The three-member Capitol Police Board has the final say on what happens to the remaining fence. That normally obscure panel has come under intense scrutiny from Congress due to communication breakdowns during the Jan. 6 insurrection, as lawmakers on both sides of the aisle blame its decision-making structure for the board’s slow response to crises. Its voting membership is composed of the Architect of the Capitol and the House and Senate Sergeants-at-arms, with the Capitol Police chief attending as a non-voting member.

Missouri Sen. Roy Blunt, the top Republican on the Senate committee overseeing the Capitol grounds, said in a brief interview that the Capitol Police Board has not told him whether it would maintain the current fencing. Blunt made clear that he favored taking the fence down as soon as possible.

“I thought it should’ve come down at the end of March,” he said.

Sen. Jack Reed (D-R.I.), who chairs the Senate Appropriations panel overseeing the Capitol grounds, said in a brief interview that he wanted a “more permanent plan” to protect the legislative branch. He added that he hoped to see “conscious steps” taken toward that end, though he declined to elaborate or address whether a longer-term fence should be part of any plan.

The Capitol Police Board and its members have largely refused to tip their hand in public on what comes next, even after the fence’s future has prompted whiplash from Hill security officials. The Capitol Police said at the end of April they would re-install sections of a perimeter fence in anticipation of protest activity, but within hours the department abruptly reversed course.

On top of the specter of the violent Jan. 6 riot by supporters of former President Donald Trump, the death of a Capitol Police officer when an attacker drove a vehicle into a checkpoint at the beginning of April raised further questions about securing the premises. (Notably, the attacker crashed into a steel barricade that has long stood outside the fencing.)

Architect of the Capitol Brett Blanton last month told lawmakers that a facility evaluation “in the coming weeks” would help prompt initial security recommendations, including an evaluation of “physical security options” through the rest of the year.

A $30 million transfer from congressional appropriators earlier this year met most “immediate needs” in funding the fencing and the National Guard, Blanton said, while warning they’d need more money for further expenses.

Several Senate panels pursing investigations into the insurrection plan to release their own reports in the coming weeks, which are expected to detail potential fixes to security gaps around the Capitol. Perhaps the most hotly anticipated of those are the findings slated for release next week by the chamber’s Rules and homeland security committees.

But even before committees make their judgments — and certainly before Capitol security officials make their moves — senators are making clear that their appetite for a long-term barrier is low.

It’s “time to wean ourselves from that fence,” said Sen. Kevin Cramer. The North Dakota Republican added that it’s a “very uncomfortable situation to have a United States Capitol, in the freest country in the world, that is protected from the people who own it.”