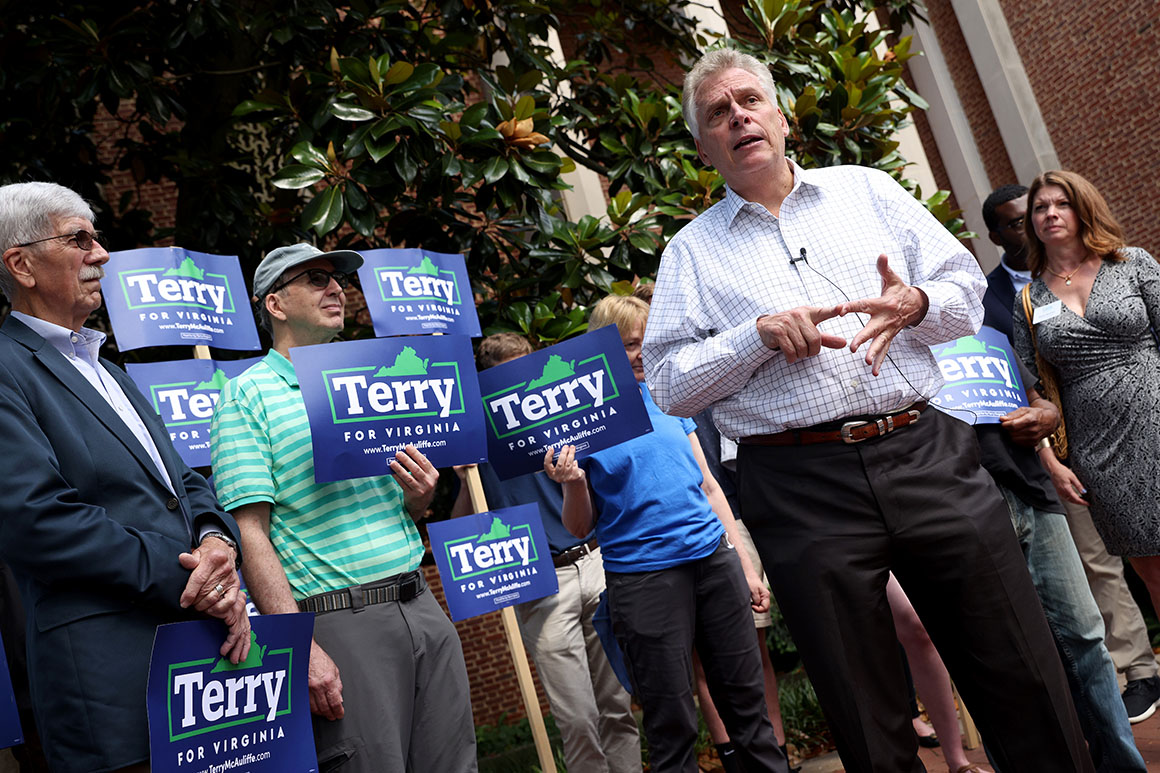 Money and name recognition have shaped the contours of Virginia’s off-year Democratic primary. They have also edged out the women and people of color vying for some of the state’s top offices.

A ticket led by two white men is the opposite scenario from what many in Virginia were expecting in 2021, which they believed would be the year voters sent a Black woman to the governor’s mansion, building on the prominence of leaders like Stacey Abrams and Vice President Kamala Harris. Even more, the state’s demographic shifts to a younger and more diverse electorate, particularly in vote-rich Northern Virginia, made some optimistic that the faces leading the party would change.

While Tuesday’s primary could still produce some surprises, the disappointment of some progressives and organizers supporting diversity in politics is mostly focused on the party’s two Black female gubernatorial candidates, Jennifer Carroll Foy and Jennifer McClellan. Neither has gained traction in the polls nor has been able to match McAuliffe’s fundraising.

“So often, we say we want a woman [governor]. But when it comes down to it, so often, it doesn’t seem to matter,” said Susan Platt, who founded the group Her Excellency VA 2021 to support both of the women running for governor.

Down the ticket, Herring has consistently led a Black primary challenger, state Del. Jay Jones. And while the top two candidates in the open race for lieutenant governor are people of color, state Dels. Hala Ayala and Sam Rasoul, activists aren’t satisfied.

Platt recalled a recent conversation she had with a colleague involved in Virginia politics. “We said, ‘It’s starting to look like we’re going to have an all-male freaking ticket again,’” she said. “It’s depressing as hell.”

Looming over Tuesday’s primary is what could be a competitive general election campaign. Republicans — who nominated a white man for governor, businessman Glenn Youngkin, as well as diverse candidates down ballot — are eager to claw back ground they have ceded in Virginia since 2009, when the GOP swept the three statewide offices one year after Barack Obama became the first Democratic presidential candidate to carry the state in decades.

While some activists may be dissatisfied if McAuliffe wins, he is well-liked by most Democrats. According to a Roanoke College poll of likely Democratic primary voters released last week, 73 percent have a favorable opinion of McAuliffe, while only 9 percent view him unfavorably. Meanwhile, roughly 6 in 10 primary voters say they have no opinion of Carroll Foy and McClellan, who were hovering around 10 percent apiece in the primary matchup. 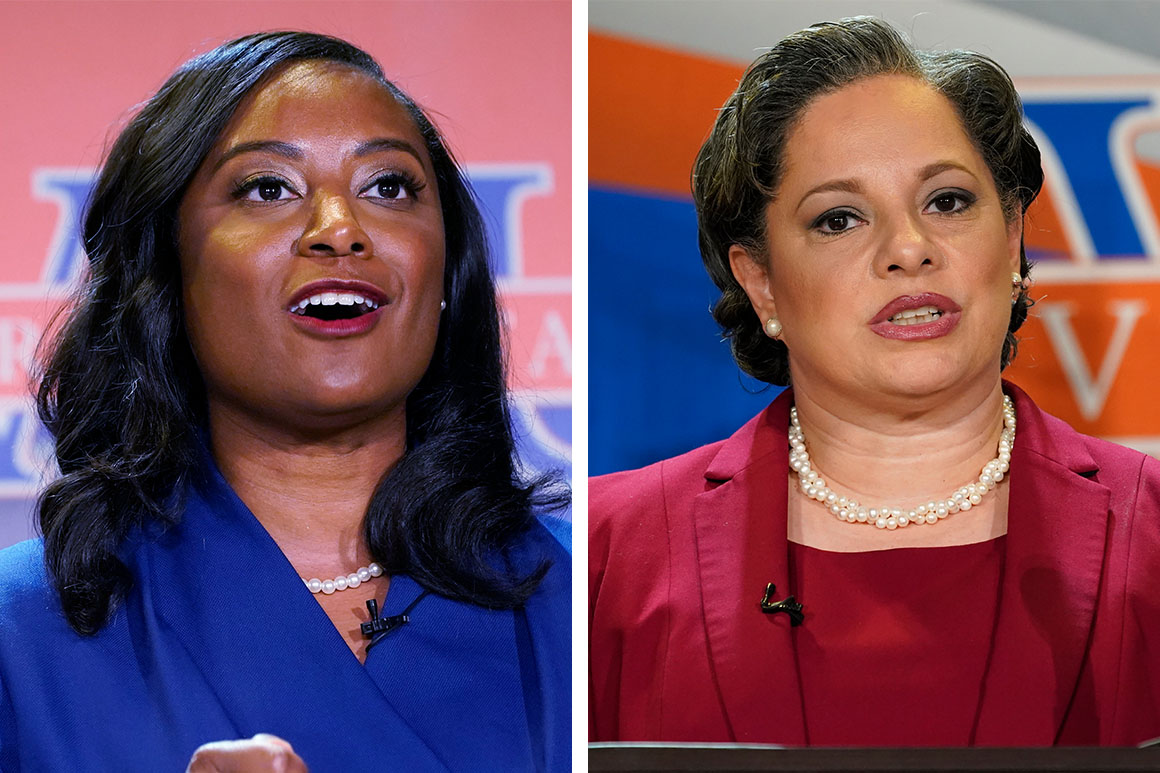 In addition to raising the most money, McAuliffe and Herring also have the backing of a majority of the commonwealth’s most powerful leaders. The first Black state Senate president pro tem, L. Louise Lucas, and state House Majority Leader Charniele Herring (no relation to the attorney general) have served as surrogates for both McAuliffe and Herring, helping shore up support among the state’s Black voters, who represent more than one-fourth of the Democratic primary electorate.

“We didn’t do what we should’ve done to clear the way for women candidates,” said Krysta Jones, founder of the group Vote Lead Impact, which trains and supports Black candidates running for office in Virginia. “It’s almost like getting society ready.”

In the race’s final weeks, a number of groups that were reluctant to back one of the Black candidates over another ultimately took sides in the race, largely throwing their money and connections behind McClellan or Carroll Foy rather than Lt. Gov. Justin Fairfax, whose past sexual assault allegations were an anchor to his campaign.

But their support hasn’t been enough to counter McAuliffe’s machine and reputation. The former governor maintains a near-40-point lead over the rest of the field, according to Roanoke’s polling. He’s also raised $12.8 million — more than the rest of the field combined.

Democrats’ lieutenant governor race is a little more complicated. While Rasoul would not bring gender diversity to the ticket, he would be the commonwealth’s first Muslim statewide official. He has consolidated support among state and national progressives, including Sen. Elizabeth Warren (D-Mass.) and former state Attorney General Mary Sue Terry, the first — and, so far, only — woman elected to statewide office in Virginia history.

Ayala, an Afro-Latina state legislator, had a slight lead over Rasoul, according to the Roanoke poll, though no candidate broke even 20 percent in the lower-profile race. She has the backing of Lucas, Herring and Gov. Ralph Northam, as well as national groups like EMILY’s List and Higher Heights. But some progressives have pushed back on her candidacy: She came under fire when she accepted $100,000 from the unpopular utility company Dominion Energy, from which she originally pledged not to take money.

By contrast, Virginia Republicans — who held a low-turnout, party-run primary last month — are running a diverse statewide ticket beyond Youngkin. Their lieutenant governor nominee, Winsome Sears, is a Black woman, and their attorney general candidate, Jason Miyares, is a Latino man of Cuban descent.

Democrats, however, have rejected the comparison, saying that representation alone means nothing if the policies they are promoting do nothing to help their communities.

Quentin James, president of the Collective PAC, which supports Black candidates running for office at all levels, described “structural barriers” to breaking through as a person of color running for statewide office for the first time.

“We’re still very much dealing in a world that doesn’t want to reckon with race,” James said. “Virginia has a long way to go along with most of the other states in the country in terms of electing people of color, electing women, electing young people, electing LGBTQ people.”

Even as McAuliffe built an early lead for governor, Jones’ bid to derail Herring — who is trying to become the first Virginia attorney general to win a third term — appeared more promising. Jones was endorsed by Northam, and his campaign points to the large number of undecided voters as evidence that he remains within striking distance of Herring.

Like Northam, Herring was tied up in the 2019 blackface scandals that roiled Virginia politics. He admitted to wearing blackface as an undergraduate at a party at the University of Virginia roughly 40 years ago.

Jones criticized Herring’s timing on enacting police reform while in office, arguing that doing so on the heels of a national reckoning on systemic racism and police violence was more politically convenient than genuine.

“It does not seem like Mark was committed to civil rights until the blackface incident a couple of years ago,” Jones said, adding that he “understands those challenges viscerally” as a Black man.

If McAuliffe and Herring do win on Tuesday, Jeff Bourne, a state delegate supporting McClellan for governor, said many people he knows would feel let down.

“We’d have missed an opportunity to put forth a face that reflects Virginia,” he said. “I think folks would be disappointed.”