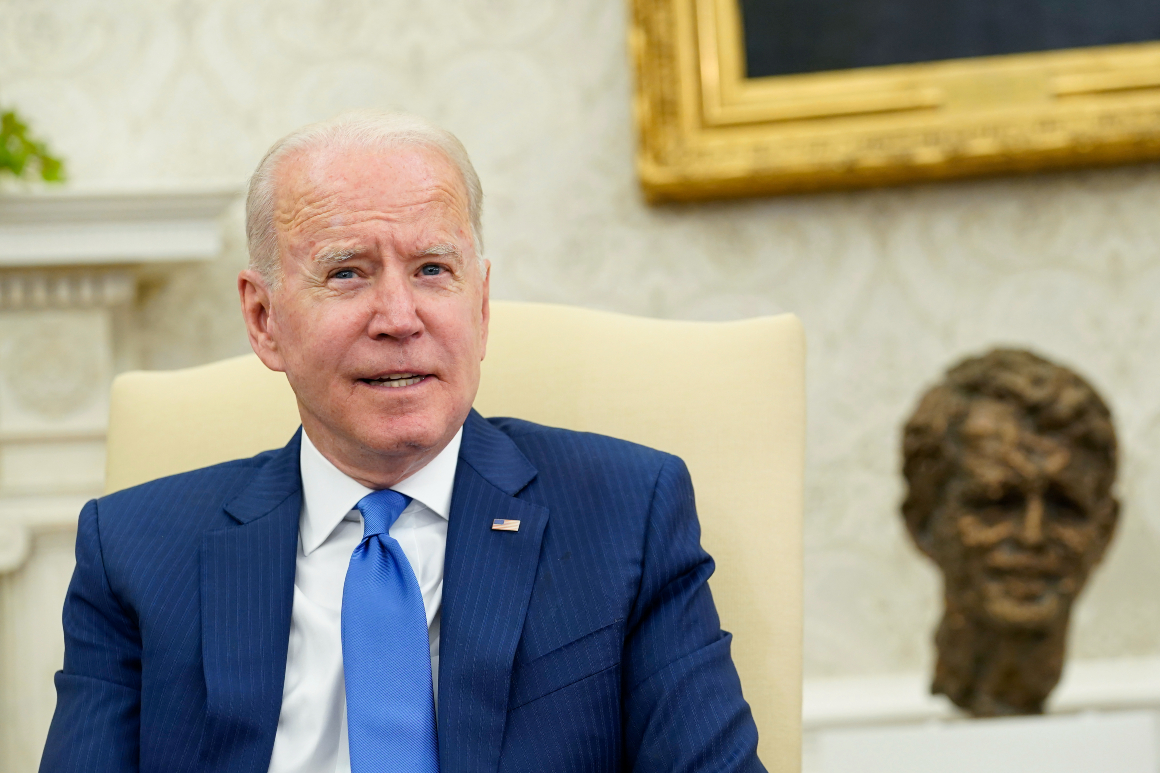 Joe Biden said the quiet part out loud and paid a price for it.

Reveling in his bipartisan win on infrastructure Thursday, the president declared that he would not sign the deal he’d just endorsed unless a separate bill including his other domestic priorities arrived on his desk, too. Whether deliberate or not, the comment set off a cascade of events in and out of the Oval Office that had aides putting out fires the next day and raised questions about the future of their prized $1 trillion bipartisan deal.

With Republicans threatening to abandon the deal, Steve Ricchetti, one of Biden’s lead negotiators, who a day earlier had been credited by the president for his efforts shepherding the deal, scrambled to contain the fallout on Capitol Hill. Both he and Louisa Terrell, the White House top congressional liaison, told the Senators involved in negotiations that Biden was enthusiastic about the deal and would soon hit the road to tout its benefits as well as the merits of bipartisanship.

According to two sources familiar with his efforts, Ricchetti told Republicans that the White House was going to clarify the comments.

A White House official disputed the notion that Ricchetti suggested Biden may have misspoke — an impression that those two sources said was left. The official said that the president’s team anticipated dustups during the early phases of the process and noted that White House press secretary Jen Psaki several times during Friday’s briefing took a softer tone than Biden did on Thursday.

But the clean up was not to the degree some Republicans hoped. During her daily briefing, Psaki said it shouldn’t have been surprising to the GOP senators that Biden planned to proceed on “two tracks,” a point that didn’t address their concerns about Biden’s implicit veto threat.

By mid-afternoon, the fury over the president’s remarks had subsided for some after an afternoon phone call between the key Senate negotiators on the package. But others remain frustrated, and the episode underscores the delicate nature of both the deal itself and the relationships among the principals involved. Even for Biden — who proudly touts his capacity to glad-hand — it has proven difficult to maintain consensus among a small group of moderate senators from both parties.

That may be because the path to passing either of these plans is painfully thin. While Republicans scoffed at Biden for pledging that he would only sign the infrastructure bill “in tandem” with another reconciliation package that Democrats expect to pass on their own, liberals cheered him on. After months of fears that they would lose out on some of their top priorities if the White House worked with Republicans, the president had provided them with a clear path forward for moving climate change legislation, Medicare expansion and many more progressive priorities.

Inside the White House, there is a belief that Senate Republicans outside the group of negotiators are keen on finding any means they can to kill the deal. And senior Democrats portrayed Republicans as feigning outrage over something they should have known to be the case all along.

“Some of this is performative – those Republicans presumably read the occasional newspaper and knew that the 2-bill thing was the only ticket,” Third Way’s Matt Bennett wrote in a text. “So I think they’ll get over their shock (SHOCK) at Biden’s making it plain.”

But, elsewhere, the White House gave off hints of trying to walk back Biden’s comments without acknowledging they were doing so.

The president personally spoke to Sen. Kirsten Sinema (D-Ariz.) on Friday — the top negotiator for Democrats — and told her he would “fight to pass the Bipartisan Agreement, as he committed to the group,” according to a White House readout of the call. The statement was careful to note that Biden had mentioned his support for the reconciliation bill while standing alongside the group of senators during a press availability outside of the White House Thursday.

Psaki, meanwhile, never explicitly reiterated Biden’s threat to not sign the infrastructure bill if the reconciliation package didn’t come, too. She told reporters that the president “fully expects, hopes, plans to sign both into law and he will leave it to leaders in Congress to determine the timeline and the sequencing.”

Republicans weren’t pleased with the line from Psaki and pushed back on the idea that they would have agreed to their deal if they knew it was conditioned on the partisan bill. But Democrats remained confident that the infrastructure package is not in jeopardy.

“I still think there is a better chance that this gets to 70 votes than it gets to 69 because all those members negotiated in good faith for months,” said Jon Kott, a former senior adviser for Democratic Sens. Joe Manchin and Chris Coons. “Nothing has come out today that people didn’t know yesterday.”

Alex Thompson contributed to this report.