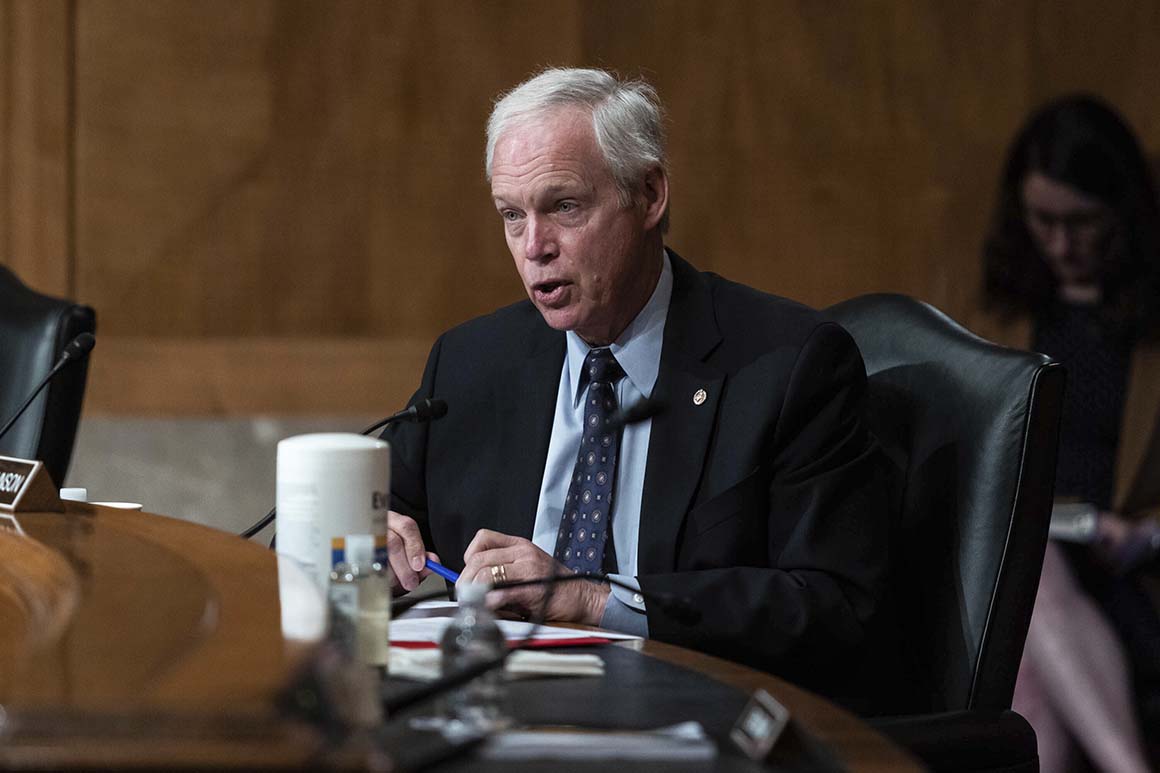 Ron Johnson fought as hard as he could against a China competitiveness bill his party helped negotiate this spring, delaying it for nearly two weeks. He won’t make things any easier if his fellow Republicans cut an infrastructure deal with President Joe Biden.

“I’d do what I could to frustrate its passage,” the ornery Wisconsin Republican said, taking umbrage with any infrastructure proposal that costs more than $700 billion. Johnson also vowed to make its path to approval a painful one on the floor. “I think we have a growing group of people who are willing to do that as well,” he added.

The China competition measure’s stumbles on its way to passage Tuesday have only intensified Democratic skepticism about working with a GOP they see as determined to snarl any attempt at bipartisan agreement. While infrastructure talks between Sen. Shelley Moore Capito (R-W.Va.) and Biden collapsed on Tuesday, the president is still negotiating with a bipartisan group of senators. Yet as the competitiveness bill’s path showed, any infrastructure deal is bound to face an arduous battle on the Senate floor.

On top of resistance from conservatives, Senate Minority Leader Mitch McConnell is loath to divide his conference and many Republicans are unlikely to support any bill that raises taxes or adds to the deficit. The uncertain prospects for steering any major bipartisan bill through the Senate are a main driver of Democratic interest in leaving the GOP behind on infrastructure.

And Democrats see proof beyond Republican efforts to slow down the China competition bill, which ended up winning over nearly every member of their caucus but less than half the GOP conference. A modest hate-crimes bill also took two weeks to negotiate earlier this year.

So, sure, the Senate can still work in a bipartisan way. But on some issues, a partisan approach would simply be easier.

“It’s hard to see a path where Republicans and Democrats come together on infrastructure and there’s not a handful of Republicans who say they don’t care what others in their party agree to,” Sen. Elizabeth Warren (D-Mass.) said. “They’re still willing to throw down for a fight and keep the whole process from moving forward.”

Senate conservatives, led by Johnson, threw up last-minute roadblocks that ground the process to a halt and delayed final passage of the China bill by nearly two weeks, frustrating the chamber’s Democratic and Republican leaders alike. Johnson’s procedural moves came as he was trying to force the chamber to consider additional amendments to the behemoth legislation ahead of the Memorial Day recess.

Majority Leader Chuck Schumer, who had invested significant capital on negotiating the China policy bill with Republicans, was forced to punt on finishing it until this week.

“They got a process that was fair; they got votes on their amendments; the system was working. And even with the system working, they would clog it up,” said Sen. Ben Cardin (D-Md.). Even if the White House and the GOP strike a deal on infrastructure, Cardin added, Democrats will have to “accommodate those who will never be with us.”

The prospects for a bipartisan infrastructure agreement are looking tougher by the day after the Capito talks failed. The bipartisan group of senators that Biden’s now turning to is working on their own proposal and met Tuesday evening to discuss their ideas, though a source familiar with the talks said that they have yet to agree on a top-line spending number and are trying to “be consistent” with both the GOP and White House infrastructure plans. One version of the proposal would spend $900 billion over five years.

The group has one advantage: At the moment, it’s not clear that Democrats have the votes to move forward on their own. Sen. Joe Manchin (D-W.Va.), who is part of the bipartisan group, said as recently as last week that he’d like to see Republicans and Democrats collaborate on an infrastructure package.

One Senate Republican noted that Biden would “like to do the whole enchilada but he doesn’t have the votes.” This senator predicted that Republicans could put up as many as 20 votes for a modest infrastructure package; that’s still less than half of the caucus.

Even if a bipartisan agreement could come together with Schumer preparing to move forward next month, senators from both parties acknowledge that the process would be tougher than the China competitiveness bill given the price tag of an infrastructure package and the stakes for Biden’s presidency.

“The only reason we’d get one to the floor would be because we put a lot in it and we know that some people want a lot more in it,” said Sen. Kevin Cramer (R-N.D.). “This is a roughly $200 billion bill, and we’re talking about a couple trillion based on the White House’s wish list and the fact that even Republicans are at $1 trillion at this point. So it, understandably and appropriately, would be harder.”

As the bipartisan infrastructure talks continue, Senate Democrats are well aware that the clock on the legislative calendar is ticking. Some Democrats are expressing concern that they’ll need to move forward promptly with the “human infrastructure” component of Biden’s proposal even if a last-minute deal is reached. Republicans have shown zero interest in pursuing paid leave, expanded child care and other policies Biden has proposed.

“Deal or no deal on physical infrastructure only, we’re still on our side going to have to tackle most of what the president’s proposed,” said Sen. Bob Casey (D-Pa.). “We’re going to have to do most of the work with 50 votes.”

Even though the Senate spent more than two weeks on the China competitiveness bill, several senators contended that the extensive floor debate before its passage is a sign of the chamber working the way it’s supposed to. The bill went through a thorough committee process, and the full Senate held 18 roll-call votes and four voice votes on amendments. That’s two-thirds of the roll-call votes on amendments the Senate considered all last year.

Schumer had promised a “robust” amendment process. In the end, even McConnell voted yes on the China competitiveness bill.

“You’re always going to be a victim of individual renegade senators, and we faced that with Sen. Johnson,” said Senate Majority Whip Dick Durbin. Asked whether an infrastructure package would be a heavier lift, Durbin (D-Ill.) countered: “It should be easier. We’re giving away things. Highways and bridges and things members think are important for their state. It used to be the winning formula.”

Sen. Richard Blumenthal (D-Conn.) agreed, saying that members of both parties love a good ribbon-cutting back home to unveil a new bridge. But he also conceded his rosier view of infrastructure isn’t shared by everyone.