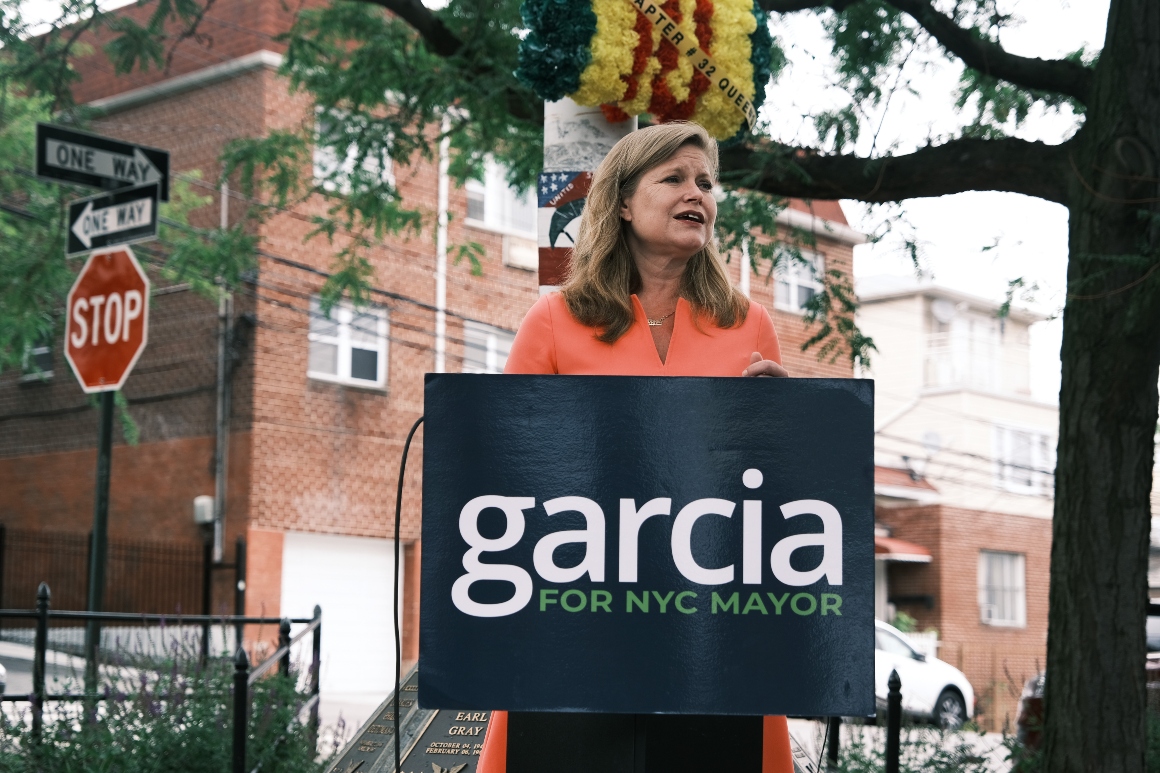 NEW YORK — With only two weeks left before the Democratic primary in New York City, two women stand to do something that hasn’t happened since the city’s founding in the 17th century: Get elected mayor.

A late surge in the polls by Kathryn Garcia, the former city sanitation commissioner, has boosted her into the top tier of candidates. And a series of events over the weekend pushed another woman, former mayoral counsel Maya Wiley, toward the top of the field. Wiley’s endorsement Saturday by Rep. Alexandria Ocasio-Cortez (D-N.Y.), one of the country’s most prominent progressive voices, came less than a day after a second woman accused rival liberal candidate Scott Stringer of sexual misconduct.

Now, with less than a week until early voting starts, the Democratic primary remains a jump ball. While Brooklyn Borough President Eric Adams dominated a poll released Monday by NY1 and Ipsos, it shows Garcia in a statistical tie for second with Andrew Yang, who spent months leading the pack but has since fallen behind. Wiley placed fifth in the poll, but it was conducted before the latest accusations against Stringer and before a host of left-leaning luminaries followed Ocasio-Cortez into the Wiley camp.

Should either of the women pull it out, they’re all but certain to go on to become mayor of New York, where Democrats have a 7 to 1 voter registration advantage and Republicans have not put up a credible contender.

The surge for Garcia and Wiley comes as women have embraced a strategic shift in how they campaign that has played well in recent legislative races in New York, but has yet to break through to the top job — either in the city or in Albany.

“What we’re experiencing in New York in an ongoing and really exciting way is a change in how we read leadership,” said Alexis Grenell, a city-based Democratic political operative and columnist for The Nation, who has been writing about gender and power for nearly a decade.

“Collaboration, coordination, working together with people — they’re coded as female qualities which voters reward women for by electing them to legislative bodies as opposed to executive positions. Of course, they’re just good leadership qualities, period.”

Despite its liberal reputation, the nation’s largest metropolis is years behind other big cities like Chicago, Houston, Seattle, Atlanta and Phoenix that have made women their chief executives. Representation of women on the New York City Council is also lacking: 14 of the 51 members are women, a decline from a high of 18 in 2009. An organized effort is seeking to boost the number of women elected to the Council this year.

“Maybe the answer is we’re not quite as liberal a city as we like to imagine,” said Ruth Messinger, who was the first female Democratic nominee for mayor in 1997, but lost the general election to incumbent Rudy Giuliani.

The 2021 mayor’s race is like no other the city has seen, and a few factors are playing in favor of women candidates: One is the decline of the city’s borough-based party systems that have historically been dominated by men. The other is ranked-choice voting, along with a far more generous public matching system.

“You’re getting a lot of women who are more viable,” said Ester Fuchs, a veteran of the former Mayor Michael Bloomberg‘s administration and director of the Urban and Social Policy Program at Columbia University’s School of International and Public Affairs. “I think this is the first time that there are this many viable women candidates running.”

Among the 100 biggest cities in the country, 32 have women mayors, according to data from Rutgers University’s Center for American Women in Politics.

The historical influence of the party machines, onerous fundraising and ballot qualification requirements, and the hard-edged nature of the city’s politics are some of the barriers that have held women back.

Quinn was long viewed as the frontrunner in the 2013 Democratic primary, but she ended up finishing third behind current Mayor Bill de Blasio and another male candidate. A host of factors played into her loss: her support for extending term limits for then-Mayor Bloomberg, a well-funded group of horse carriage opponents who made it their mission to torpedo her campaign, and the late entry into the race and subsequent collapse of Anthony Weiner in a sexting scandal.

But Quinn, the first woman and first openly gay Council speaker, says her campaign made a crucial error that contributed to the defeat: trying to soften her image to make her more palatable to voters.

“The decision was made … that I should try to tone it down, make myself softer, be less female, and less LGBT. Big mistake,” she said. “Because I ended up being so in my head, trying to walk this incredibly thin line, I ended up seeming and being inauthentic. And there’s nothing voters hate more than being inauthentic.”

“I regret not having my first commercial be: ‘I’m Chris Quinn, and I’m pushy, obnoxious, loud and get a lot of things done.”

“Get s— done” is one of Garcia’s campaign slogans.

Before Garcia’s recent surge, Yang, a former presidential candidate and newcomer to city politics, said repeatedly he’d like to hire her to help run City Hall — an idea Garcia condemned as sexist.

“Are you not strong enough to actually do this job, without me helping you? You should be strong enough. You shouldn’t need me,” Garcia said in an interview with The New Yorker. “To be quite clear: I don’t need you guys to run this government.”

“Who thinks that way? And the answer is a lot of men,” she said. “There are a lot of people who think like Andrew Yang. I think that explains why it’s so hard to get women elected.”

Wiley has also called out what she sees as sexism on the campaign trail. A former chair of the Civilian Complaint Review Board, she has clashed with Adams, an former NYPD cop, over his statements that stop and frisk is an appropriate police tactic under certain circumstances. On Wednesday, he said his critics on the issue should “shut up.”

While New York lags other cities in sending a woman to City Hall, it is not alone: big cities like Los Angeles and Philadelphia have never had a woman mayor. Boston installed its first woman mayor when Kim Janey was sworn in on an acting basis in March, after Marty Walsh left to become President Joe Biden’s Labor Secretary.

According to data released by the Center for American Women and Politics this spring, 30.5 percent of municipal office holders nationwide are women. Researchers say the number is about on par with their representation at other levels, and knocks down the myth that women do better at the local level.

New York state ranks 31st out of 50 states, with 28.6 percent of municipal offices held by women.

“We have found that it is harder for women to break in in places where the gatekeepers are the strongest — the gatekeepers being political parties, party leadership, and gatekeepers can also be things like unions,” said the center’s director, Debbie Walsh. “That is very much the case in New York City.”

Messinger, who went up against Giuliani, noticed a pattern when approaching New Yorkers who were frequent political donors: they would give her money, but in smaller amounts than they gave male candidates. A more generous public matching program in this election, which awards smaller, local donations with an 8 to 1 match, has helped counter that effect, Fuchs said.

Messenger’s polling found that in some communities, voters were comfortable with women in legislative office but not in an executive position. Her campaign convened a small focus group to get voters’ impressions of her.

“The first man who spoke said, ‘Well, I can tell you one thing: I wouldn’t want to date her,’” Messinger said.

Nearly a quarter century later, the barrier Messinger was seeking to break is still intact. “If you’d asked me then, would New York be ready for a woman mayor in the next 20 years, I would have said yes,” she said.

Ranked-choice voting may help end the streak. With a chance to rank multiple candidates, voters can bring a variety of priorities to the polling booth rather than choosing a single candidate. That means the ultimate winner may not get the most first-choice votes.

“It’s about eliminating the spoiler effect,” Grenell said. “You can have multiple people from a discrete demographic run without canceling each other out.”

While running primarily on their experience and policy stances, the leading woman candidates this year have highlighted their history-making potential. Garcia’s first campaign ad is titled “Break Glass,” and shows her smashing her way out of a glass box (after applying safety goggles).

Though they are the majority of the city’s primary electorate, women have never voted as a bloc, instead splintering along racial or ideological lines much like male voters.

“Women, as a group, are not a base,” said Fuchs, who also runs a voter information site called whosontheballot.org. “I would argue that women don’t view themselves as a bloc of voters when it comes to Democratic primaries in New York City.”

Unlike on the national stage, there isn’t much daylight between Democrats on issues like abortion rights and equal pay that could unify women.

“New York City politics is very fractured, no one group — no matter how you define it — dominates. You need a coalition,” Fuchs added. “So even if you’re running on a platform that it’s time for a woman, you still need to attract some men.”

“Women, it’s time to get out there and vote,” Ossorio said. “This election is ours for the taking.”

David Giambusso and Amanda Eisenberg contributed to this report.