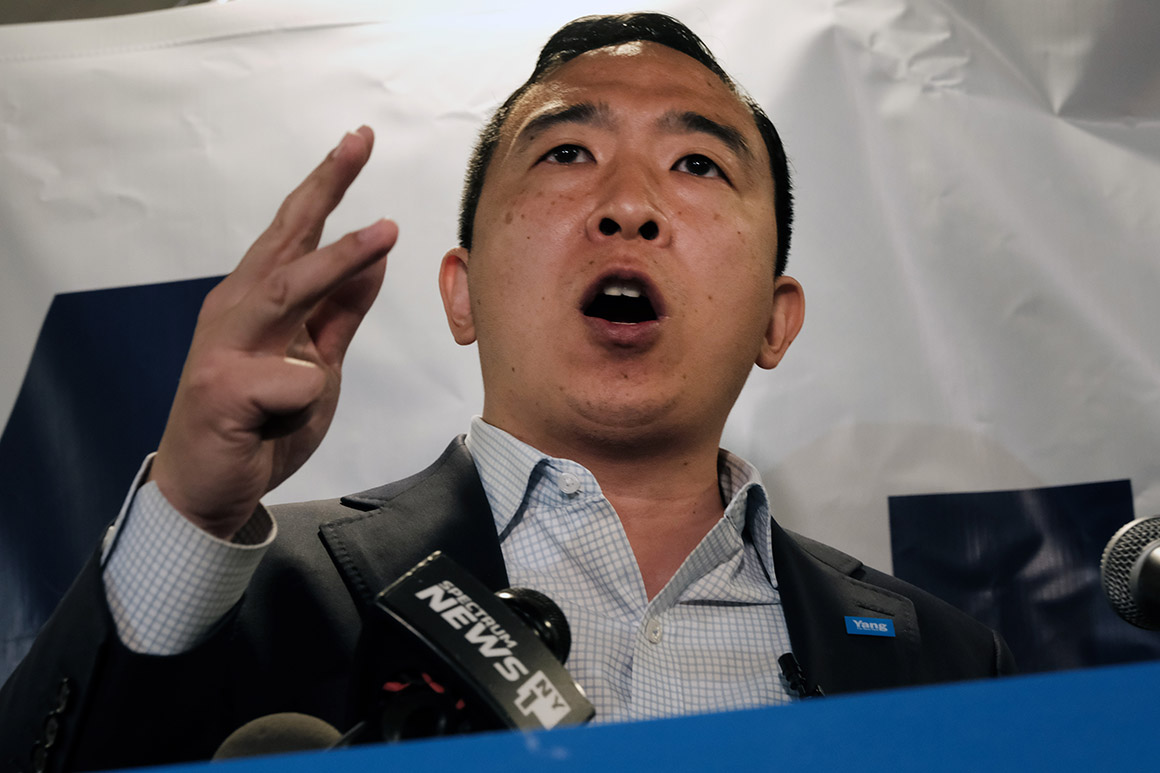 NEW YORK — Andrew Yang has for weeks claimed he was deeply involved in helping Democrats take back the Senate, touting his work in the Georgia runoff as he campaigns for mayor of New York.

“I moved to Georgia to help win the Senate,” he told voters, asking if they could “imagine” what would have happened if the Republicans had control of the Senate. “That has given us a lifeline and opportunity to actually get out of this crisis. I’m proud of that work.”

But activists on the ground in Georgia paint a more complex picture of Yang’s involvement: that of a man who clearly leveraged his celebrity for the sake of a razor thin Democratic victory — and energetically so — but who may have exaggerated his activity and impact on the race.

“We were on the f—ing ground” for years, said Linh Nguyen, the leader of the RUN AAPI voter outreach campaign and the former Georgia Democrats Coalitions director for Asian American and Pacific Islander outreach. “Anyone who understands what it takes to win campaigns knows, it’s going to be more than speaking opportunities. It’s more than dropping in with a couple of months to go. This is long term organizing infrastructure.”

At least one of Yang’s rivals in the Democratic mayoral primary also questioned his claims. During the first official debate in May, Brooklyn Borough President Eric Adams — now the frontrunner — said it was “appalling” that Yang would take credit for the work of “Stacey Abrams and those Black women who organized on the ground.”

Yang has never been a conventional politician. His prominence was built on an internet-driven presidential campaign centered around a singular issue: a universal basic income of $1,000 a month for everyone, a bonkers idea circa two years ago that has since caught on in mainstream politics. His appearance in the Democratic presidential primary debate was due in large part to the intense grassroots activism of his online fan base — the self-titled “Yang Gang.”

The New York mayoral primary, now two weeks away, will test whether that popularity has leapt off the internet and turned into actual votes.

Longtime activists in Georgia say they were rankled by Yang’s comments about his role there, viewing them as a grandstanding effort to claim responsibility for years of unnoticed work that flipped the formerly deep-red state blue in the presidential election and Senate runoffs.

“Frankly, that’s a slap in the face to the hard working grassroots volunteers who put in over decades of work registering voters, especially AAPI volunteers, who put in the work, for years, to register their communities, to mobilize voters, to protect voters,” said a senior staffer for one of the Senate campaigns, speaking on condition of anonymity to avoid political repercussions.

But some in Georgia who directly interacted with Yang said the energy he created was decisive in turning out young voters — an effect of the Yang Gang and, to an extent, AAPI voters in Georgia.

“I didn’t know how I was going to get people to recognize how important this [race] was,” said Cam T. Ashling, chair of the Georgia Advancing Progress PAC and Ossoff’s AAPI constituency director during the Senate runoffs. “I was sending out postcards and I was posting flyers and all that to say ‘This is a historic election. You can make history.’ But how do I get that to people, and then I have other people confirm my message? So having Andrew come down was huge for that.”

But as he has in the mayor’s race, Yang made some ill-considered statements that irked local operatives. His announcement that he would “move” to Georgia frustrated local Democrats, who were deeply attuned to the specific strategies needed to win the state.

They had already been dealing with right-wing conspiracies claiming that Democrats were moving en masse to Georgia to vote in the runoffs, artificially inflating their voter count. Yang’s tweet not only bolstered those claims, it generated headlines across right-wing media.

“It was a headache for us more than it helped us. There’s a reason Stacey Abrams had to beg people not to move to Georgia,” a senior campaign staffer recalled.

Indeed, Yang’s prominence was viewed by some as a potential hindrance, even beyond the right-wing hand-wringing.

For others, however, the celebrity element was a godsend — particularly when it came to youth voter turnout.

“[H]is presence in Georgia during the 2020 Senate runoffs mobilized younger first-time voters to cast their ballots for candidates who wholeheartedly reflect their beliefs,” said Sophie Lee, the former chair of the Georgia High School Democrats, recalling a phone bank event and Q&A session he hosted for her group. According to her, Yang drew more than 150 students across the country to the event.

Martin Luther King III, the president of the Southern Christian Leadership Conference and co-chair of Yang’s mayoral campaign, said he endorsed Yang in the primaries because of UBI — a concept his father, Martin Luther King Jr., had also championed. He joined Yang the moment he came down to Georgia, holding several GOTV events.

“Very few people decide ‘I’m going to stop what I’m doing and go focus on helping these candidates get elected.’ That’s what he did and that was huge,” King said. “And because he had a profile, in fact, because he’d run for president, there are a lot of young people that support Andrew Yang around the country, and support many of the ideas that he has.”

Yang and King’s work as two of the cofounders of Win Both Seats, a project affiliated with the super PAC Defeat By Tweet, raised nearly $3 million for local minority-run activist groups in Georgia. The leaders of several of those groups — the Black Church PAC, Care in Action and the Black Male Voter Project — told POLITICO that the grants from the project were significant.

“The donations that Black Male Voter Project received from Defeat by Tweet exceeded $100,000,” said Mondale Robinson, the head of the Project. “[A]ny person doing that understands this work and how it is to get funding realize how significant that amount of money is for a Black-led organization.”

The question around whether he boosted AAPI voter engagement in Georgia, however, is thornier; reflective of Yang’s lightning-rod status in Asian-American politics.

Historically, the AAPI vote in Georgia was woefully under-activated.

“I mean, up until recently, we never knew where f—ing Asian voters were [in Georgia], we didn’t know what they cared about. We didn’t even know if they were going to vote Democrat,” Nguyen said. “And so November 2020, voter turnout in Georgia really set the tone for how AAPI engagement should look.”

Ashling, who is Vietnamese-American, had a different assessment, viewing Yang’s star power as a booster shot for AAPI and young voters. Despite their historic turnout in Georgia during the November election, she recalled being worried that they would not turn out in the runoff election scheduled mere months after a fatiguing presidential race.

“What if we could get one but couldn’t get the other one? And then what if [older] Asian Americans were kind of racist against Warnock? I mean, that would be bad,” Ashling said. Hence, an event that she hosted with Yang and Warnock in Gwinnett County in November.

“There’s this stigma that straight East Asian men aren’t politically marketable. And Andrew trumped that. He smashed it. He was a powerful voice in a space that’s not been occupied by an Asian man,” she said. “So when he came down, he was a political celebrity presence.”

Yang’s higher ambitions, however, could not be ignored. As early voting began in December, Yang left Georgia altogether for over two weeks during the holidays.

“That was when the rumors [started], that he would hop in the mayor’s race, and I don’t think we saw him again,” said a senior staffer on one of the Senate campaigns.

According to his Instagram account, he was back in New York with his family for the holidays, posting photos of himself riding down West 42nd Street on a bicycle and visiting the Rev. Al Sharpton. Weeks later, Yang announced his candidacy.

In the final stretch of a bruising mayoral campaign, Yang has called in his allies to help, and several Georgia activists and politicians plan to canvass and hold events in the coming weeks.

Georgia State Senator Sheikh Rahman told POLITICO that he was returning the favor for Yang, who had supported him in his own race. “As the first Asian-American elected state Senator of Georgia and especially under the circumstances of what’s going on around the country, I’m motivated to help my fellow AAPI candidates get elected around the country,” he said via text.

Ossoff, for his part said he “appreciated” Yang’s help.

“He’s got a diverse following,” the senator said in a phone interview. “He’s got strong support among folks in the Asian American community. He’s also got supporters from a diverse range of backgrounds and it was just appreciated that he was willing to do some work to help get out the vote.”

Ossoff has not endorsed in the mayor’s race.