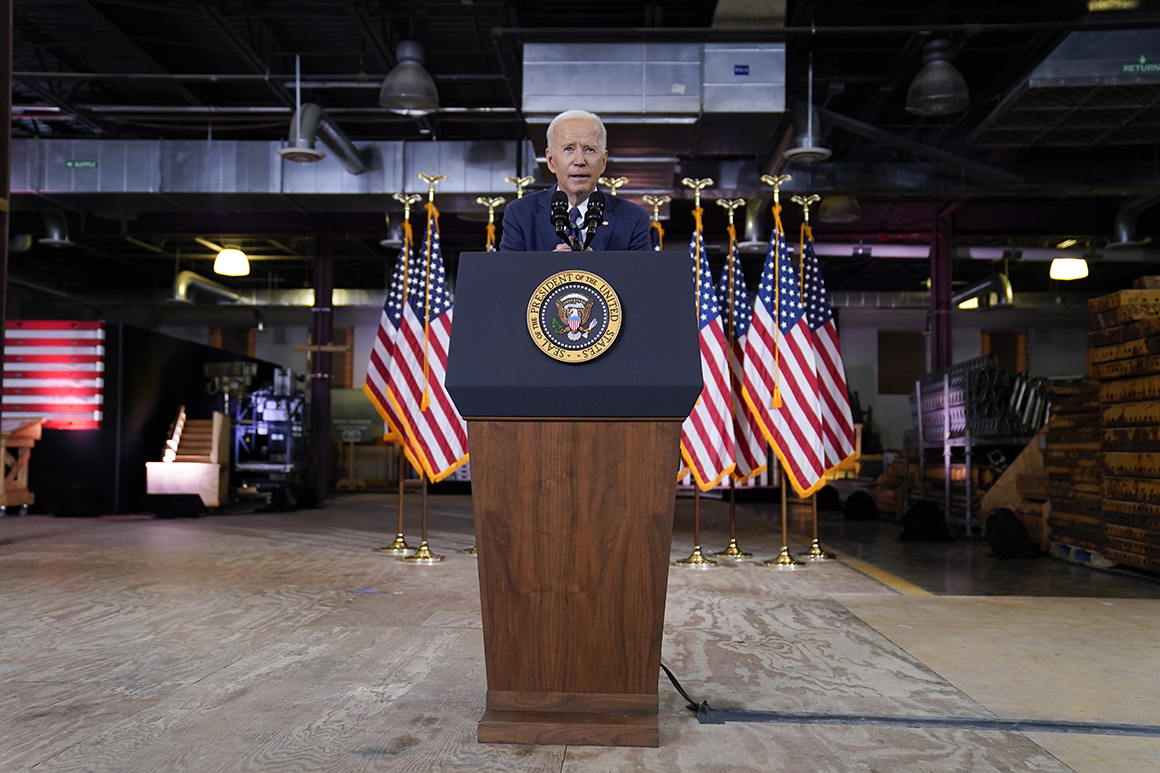 The White House has shifted its messaging around the president’s agenda after Democrats across the ideological spectrum warned it was becoming ill-defined and increasingly unwieldy.

Having spent months pushing his domestic priorities through a dual-track approach — a jobs plan and a families plan — President Joe Biden is once more placing his initiatives under the umbrella of “Build Back Better.”

The use of that tagline is a reversion to the campaign, when Build Back Better became something of a rejoinder to Donald Trump’s “Make America Great Again.” Its reemergence is, in part, an effort to placate Democrats and progressives who raised concerns that the myriad proposals that made up an ambitious infrastructure agenda had become too confusing to explain to supporters.

Those concerns were relayed to the administration in a series of meetings and emails over recent weeks, six people familiar with the discussions told POLITICO. They grew louder after Biden struck a deal with Republican senators on a bi-partisan infrastructure framework that scaled back what had initially been known as the “Jobs Plan” by dramatically reducing the climate components of that proposal.

Climate activists specifically argued that their initiatives didn’t fit neatly into the parallel-moving “Families” plan—where they now are set to be placed alongside items like paternity leave, education, and childcare—and thus would be difficult to message and make easy targets for critics.

There were also larger fears that the litany of initiatives and enormity of the White House’s legislative agenda—trillions of dollars in spending in all—would be lost on potential voters, particularly as it jumped from selling one plan to another, each with a different branding: the American Rescue Plan (Covid relief, which passed earlier this year), the Jobs Plan (hard infrastructure), and the Families Plan.

In attempting to describe it all once again as the Build Back Better agenda, Democrats are eyeing a more simplified framing of the Biden agenda. They’re also hoping to ease the passage of the Families plan, which they’ll likely have to enact with no Republican support.

Activists say they’ve already seen a change from the administration. In a speech last week in Illinois, Biden laid out the second half of his plan under the banner of Build Back Better. Press Secretary Jen Psaki has dropped references to BBB in multiple briefings during July, including one where she said the White House was now calling the “reconciliation” package the “Build Back Better plan.” And Gina McCarthy, the White House’s domestic climate czar, issued a memo laying out all the climate initiatives they want pursued through the reconciliation package. Even after the changes, those close to the process noted that some of the old terms could crop up occasionally.

“Last week was the one-year anniversary of the President’s Build Back Better platform, and this plan will realize the promises he made on the campaign trail with game-changing policies for education and childcare, as well as other crucial, job-creating priorities on climate and housing that economists agree are many of the best ways to propel growth and strengthen the American middle class,” said White House spokesman Andrew Bates. “The President is focusing on the benefits that this proposal and the bipartisan infrastructure framework will deliver for everyday people.”

Since Biden took office, Democrats have warned that he should not fall into the same trap as President Barack Obama in 2009, who admitted he fell short in adequately selling his accomplishments, for which Democrats paid the price at the ballot box. The White House and allied outside groups have sought to avoid those missteps by launching ad campaigns and barnstorming the country to explain what was in the Covid-relief bill and what is being proposed in the infrastructure initiatives. But the work hasn’t paid off as planned.

In late June, a Biden-aligned super PAC reported that voters were largely clueless about the president’s accomplishments after it hosted a series of focus groups in swing states. POLITICO reported last week that Unite the Country PAC issued a warning that Democrats had better recalibrate to focus on selling their accomplishments if they had any hope of winning midterm elections.

Simon Rosenberg, a longtime Democratic operative, said the White House’s move to bring everything under Build Back Better was a smart course correction.

“It connects people back to the President’s two core and most important promises – defeating Covid and leading the country through the recovery – and it is a simple clear statement about what he’s doing,” Rosenberg said. “All the various plans got confusing – this makes it all simple, and powerful, again.”

While Unite the Country CEO Steve Schale said rebranding it all under Build Back Better was a start, he warned that Democrats had their work cut out for them.

“Changing the logo, changing the brand – I mean, in the end you still have to have something that goes out and sells it, and informs,” Schale said. “We can’t assume that people in our base know what he’s doing.”

Schale said that in the focus groups, it was clear that voters had heard of negative messaging about Biden but were unaware of initiatives like Biden’s child tax credit, payments that are scheduled to begin going out this week.

“As people understood it better,” Schale said, “they felt good about the boss.”