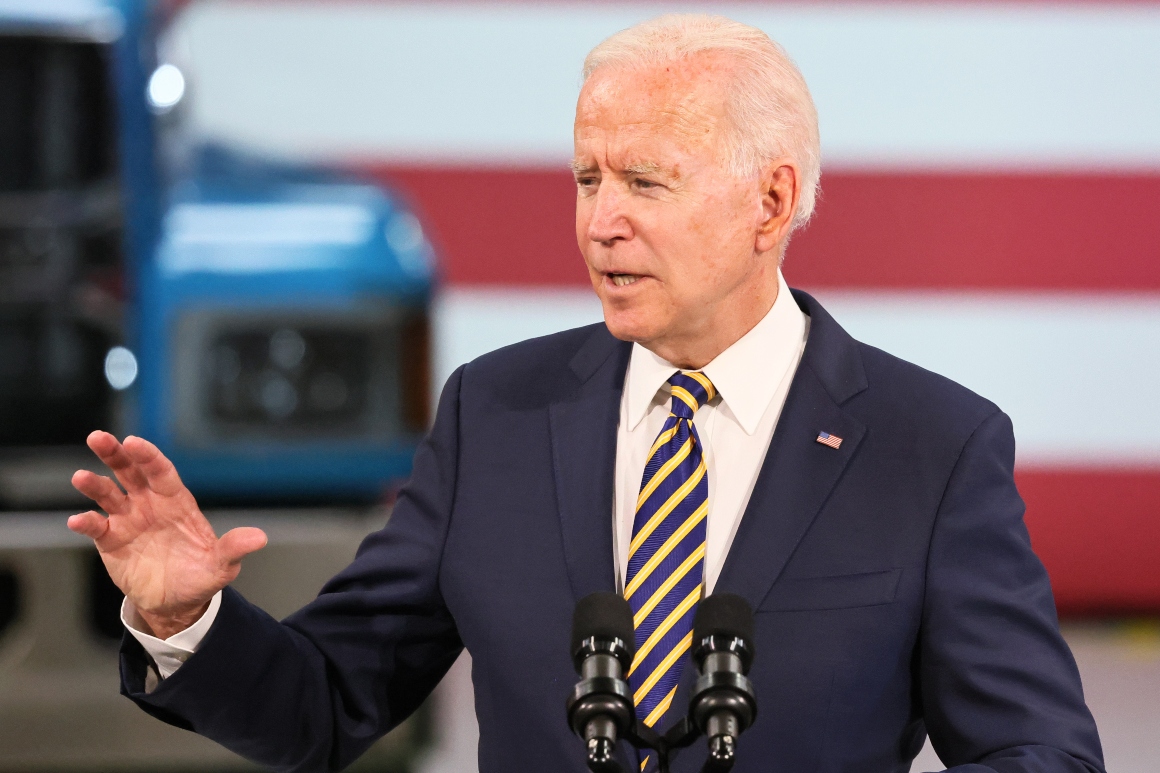 President Joe Biden moved significantly closer Wednesday to achieving his massive infrastructure overhaul — the type of bipartisan win he’s dreamed about since launching his campaign for the presidency.

Seventeen Republican senators voted with Democrats to advance a roughly $1 trillion deal that would spend heavily on roads, bridges, broadband and public transit. And though it was a vote merely to start debate, Democrats expressed cautious optimism that a bill would eventually reach Biden’s desk. It was, the White House stressed, a testament to the president’s political skill and persistence. Despite constant fits and starts, grumbling from many in his party, and predictions that negotiations would fall apart, Biden refused to give up on working with Republicans.

“Maybe I’m an ironic person to say it, but it turns out that decade’s worth of expertise and relationships and pattern recognition are really helpful to getting a big result like this done,” Transportation Secretary Pete Buttigieg said in an interview. “This was a team that was not distracted, the president was not thrown by the different kind of drama of the day, or the shiny objects.”

Showing a bit of confidence, Biden took a second victory lap in as many months on Wednesday, calling the deal “a blue-collar blueprint to rebuild America” that would be the biggest infrastructure investment in a century. But he also cautioned that there is “plenty of work ahead to bring this home” and that “there will be disagreements to resolve” in the near future.

“[Biden’s] a creature of the Senate and there’s something to be said for that,” said Sen. Brian Schatz (D-Hawaii). “Maybe professional politicians are actually good at politics.”

This week, Ricchetti worked late nights alongside the lead Republican negotiator, Sen. Rob Portman (R-Ohio), to hash out major hang-ups. And though some congressional Democrats warned that too many of their priorities were being sacrificed for the sake of bipartisanship, White House officials didn’t waver publicly or privately in conversations with their party members.

Though most Democrats were hesitant to declare victory — repeating the oft-used Washington axiom that nothing’s “done until it’s done” — they said that a bipartisan compromise would help Biden ink future ones with Republicans. Buttigieg suggested that the deal would demonstrate to Republicans that there is “a lot of upside” to doing “the hard work” to craft a deal like this one.

Democrats also predicted that a final deal would prove useful electorally for the president, as it could both fracture Republicans and fulfill Biden’s campaign promise that he could work with GOP leaders even as they vowed to kill his agenda.

“I think the president is demonstrating that he has the ability to make this town work, in part, with his Democratic allies on the Hill, and that is what our country needs, a functioning government with responsible adults delivering real results on important issues,” said Rep. Sean Patrick Maloney (D-N.Y.), chair of the Democratic Congressional Campaign Committee. “The fact that he has divided the Republican caucus ought to bring the curtain down on this era of Mitch McConnell killing everything the American people need. The president has just broken the Republican caucus. And that’s a huge win for the White House.”

Biden still has to keep the entire Democratic coalition together on final passage of the bipartisan deal. He’ll also have to reassure progressives and Democratic lawmakers who felt cut out of Senate negotiations that their priorities will be addressed in the $3.5 trillion reconciliation bill, which is expected to be considered soon.

To Democrats dismayed by Biden’s love affair with bipartisanship who are threatening to withhold votes, particularly in the House, Buttigieg’s message was to look at the scale of what was achieved. The funding investment is “of the historic level that really defines eras” and it “represents a big shift in this country from a pattern of underinvestment and disinvestment.”

But Biden’s own advisers conceded that the president would need to turn some of his focus to the sprawling spending plan that Democrats are pushing to enact without the help of Republicans.

“No doubt it is a huge deal to get the BIF. It shows the commitment of this president given no one thought it could be done,” said John Anzalone, another top Biden pollster and longtime adviser. “But he also knows people are still hurting and that working families need help to lower costs on child care and elder care, skills training and other important things that will give them more opportunities in the economic recovery.”

The infrastructure framework announced Wednesday would provide nearly $600 billion in new funding for roads, broadband, public transit, electric vehicle chargers, water infrastructure and more. Though there’s no legislative text yet, an outline provided by the White House says a mix of leftover emergency relief funds, tax enforcement on crypto currencies and other provisions will finance the deal. The deal won’t raise taxes on anyone making less than $400,000 — a red line for Biden from the beginning. But some lawmakers are still waiting to see the hard math, questioning how the initiatives mentioned will pay for the entire package.

Though much of the action around the deal occurred in conversations between senators and top White House aides, administration officials said the president was intimately involved. Biden was briefed multiple times a day and directed the strategy as he held calls with lawmakers. The senior White House team met daily to get in sync on the bipartisan deal and would then brief the Cabinet secretaries — known as the Jobs Cabinet — who were tasked with wooing senators to support the infrastructure framework.

Biden’s ability to maintain Republican support on a deal with him is a sign that Congress may be finally working the way it was intended, said Sen. Chris Murphy (D-Conn.) who was optimistic the bipartisan deal would reach the president’s desk.

“Not only is Senator Schumer and Joe Biden able to deliver a bipartisan compromise, we’re also opening up the floor to votes,” said Murphy, predicting amendment votes might be allowed on the narrow infrastructure package. “There’s 30 percent on either side who are never gonna support compromise but the folks who were disaffected with democracy — and a lot of the folks that are in Donald Trump’s camp — are people that want bipartisanship and never saw that happen.”

If ultimately passed, White House officials and close allies say that they believe both the contents of the bipartisan infrastructure plan and the process by which it moved through Congress will prove popular with the public. They don’t plan to over-complicate the messaging around it.

“For the first time, the process is very popular, too — that it’s Democrats and Republicans coming together,” said Celinda Lake, a pollster on Biden’s presidential campaign.

“Normally, voters don’t give a damn about the process but they really do here,” Lake added. “It’s a central theme for Biden and a core strength of his because people believe that Biden is a lot more committed to bipartisanship and working together than either party is.”