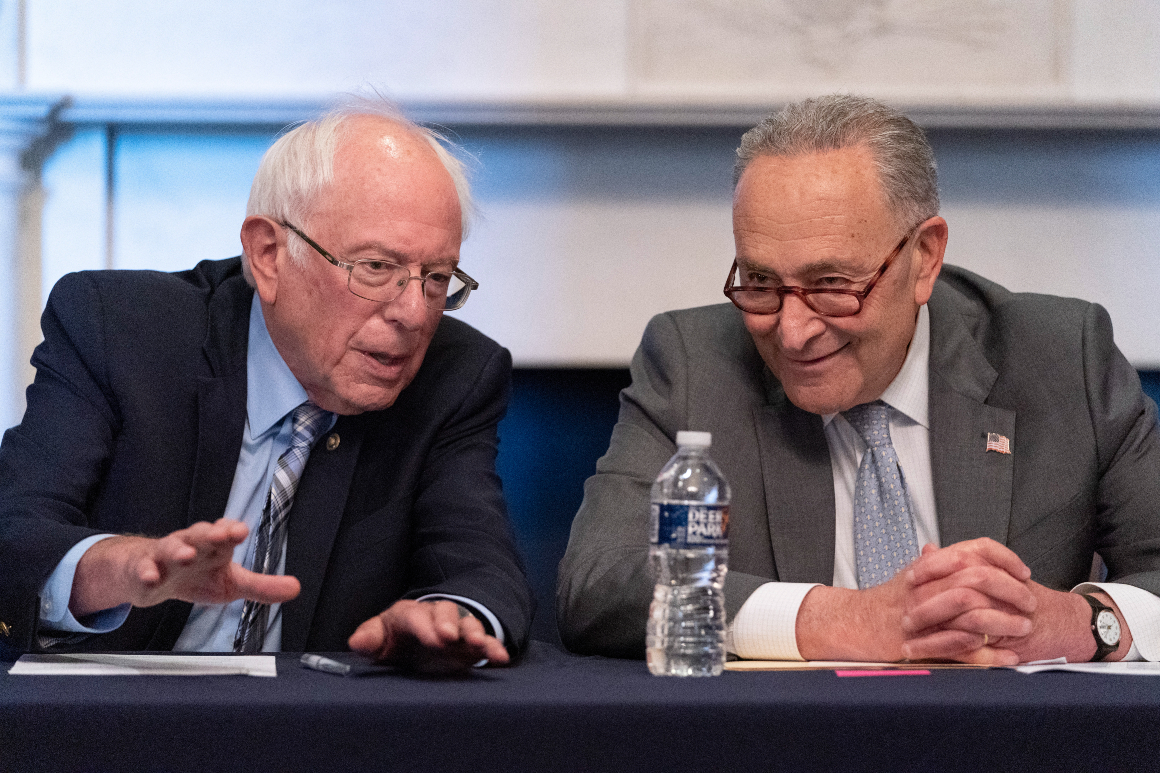 President Joe Biden returned to the Senate on Wednesday to celebrate clinching a budget deal with Democrats, though it’s just the beginning of a long process that will test his prowess with his former colleagues.

During a closed-door lunch that Biden, who served in the Senate for decades, called his “homecoming,” he encouraged the Democratic caucus to be ambitious on both the bipartisan physical infrastructure package and a larger $3.5 trillion social spending package. He also emphasized the need for the party to engage with working-class voters in rural America, arguing that delivering on his families and jobs agenda could help Democrats reverse losses in those areas, according to two sources familiar with his remarks.

Attendees said they also sensed Biden knows he has work to do in recruiting two key moderate senators to sign on to the deal while keeping the support of progressives that aspire to go much bigger. In a sign of those challenges ahead, Sen. Joe Manchin (D-W.Va.), the Senate’s most conservative Democrat, said after the lunch that he has concerns about inflation as well as Democratic language in the spending package that relates to fossil fuels.

Biden “understands this is a process,” said Sen. Cory Booker (D-N.J.) in an interview. But the president is “rightfully confident in our ability to get something over the line.”

The president focused his lunch remarks on the nuts and bolts of his agenda, such as the child tax credit that will hit bank accounts this week. He received a series of standing ovations and praise from senators ranging from Jon Tester (D-Mont.), a moderate, to the progressive chair of the budget committee, Bernie Sanders (I-Vt.), according to an attendee.

Senate Democrats left the lunch upbeat and positive about their ability to deliver on Biden’s nearly $4 trillion physical and social infrastructure plans. But they also acknowledged that there is a long road ahead before the plans reach the president’s desk for a signature.

“There’s still a lot to learn about the budget committee process,” said Sen. Chris Murphy (D-Conn.) “I certainly haven’t committed to vote for it yet. The bipartisan package to me is too slim on some of the accounts that matter in Connecticut when it comes to rebuilding our infrastructure. But we have a chance, I don’t think we have a choice to fail here.” 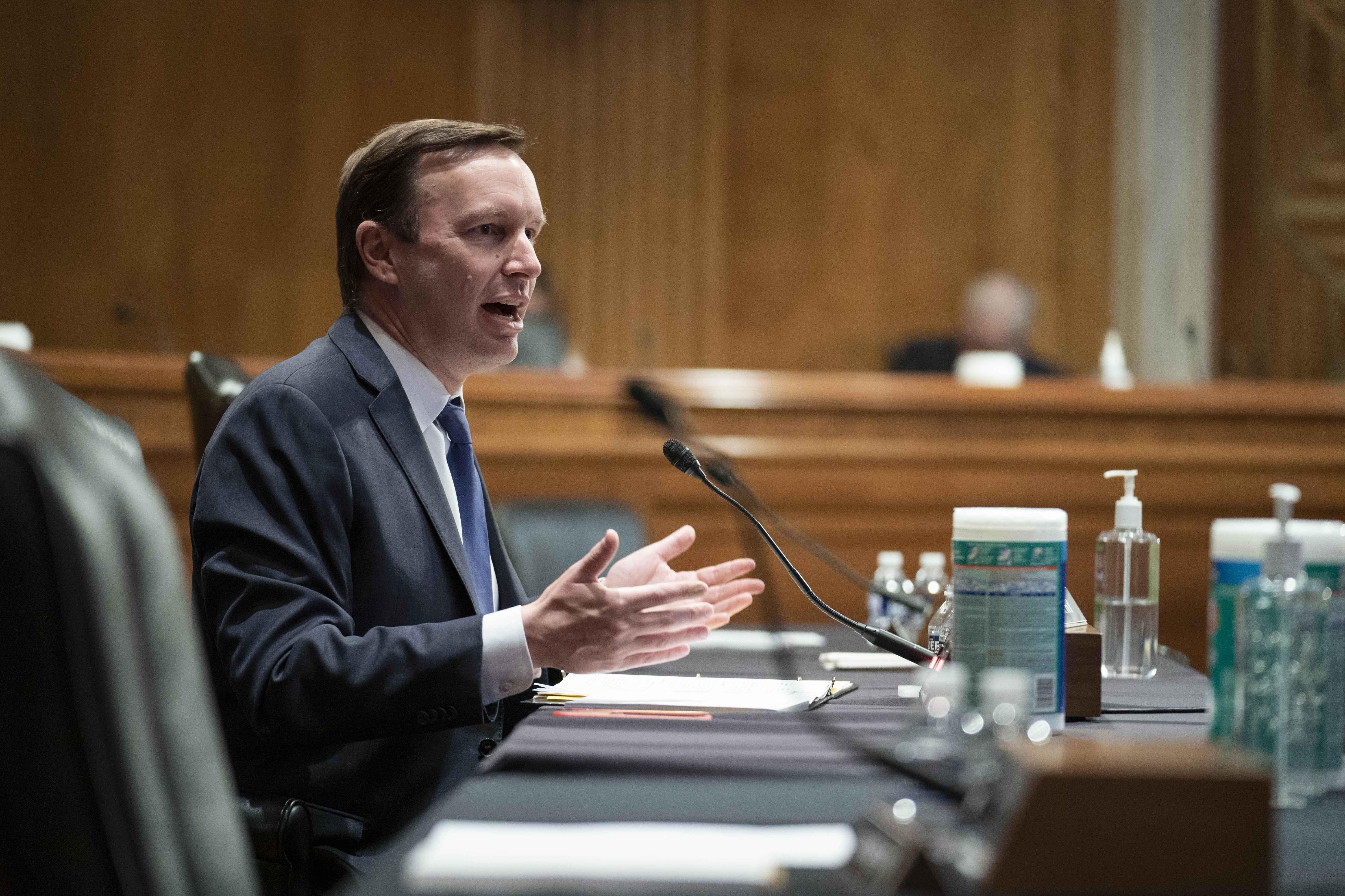 During the lunch, Biden gave credit to members of the caucus, saying that they inspired and paved the way for his proposals, according to a source familiar with the president’s comments.

Biden pointed to polling that showed support for both the bipartisan infrastructure plan and his care-economy plans that would go through the reconciliation process. In particular, he said that the polling shows that asking corporations and the wealthiest individuals to fund Democrats’ plans was “hitting home in a big way” with voters, the source added. And Biden argued that a lot of benefits in the budget resolution would have the effect of a tax cut for middle class people should they make it into law.

At one point, Biden referred to Sen. Chris Coons (D-Del.), a close confidante who succeeded him in the Senate, as “the boy who has my seat and he’s doing a better job than I did,” according to two sources familiar with his remarks.

The bipartisan infrastructure framework still has to be turned into complete legislative text. And while the $3.5 trillion social spending package is expected to include Democratic priorities ranging from child care to climate change, most senators have not yet reviewed the fine details. With a razor-thin majority in the Senate and unanimous GOP opposition, Senate Majority Leader Chuck Schumer can’t afford a single defection.

Schumer, Sanders and Sen. Mark Warner (D-Va.)—who helped negotiate the budget package with Sanders—briefed their colleagues during the lunch, laying out their plans to plow trillions into green energy and climate resiliency, expand universal pre-k schooling and paid leave, and extend the child tax credit past its year-end expiration date. Sanders also achieved his goal to include the expansion of Medicare to cover dental, vision and hearing and Democrats’ plan to expand home care, reduce prescription drug costs, promote Medicaid expansion to resistant red states and strengthen Obamacare.

Those initiatives will be paid for by raising taxes on corporations, the wealthy and on the promise of “economic growth” — a form of so-called “dynamic scoring” that could earn pushback from Senate moderates.

During the lunch, Biden did not single out Manchin and fellow moderate Sen. Kyrsten Sinema (D-Ariz.) as he has previously. Both are open to supporting the massive spending package but are thus far noncommittal.

But Biden did make clear that all Senate Democrats need to be on board, making sure to thank the entire caucus for its work so far in assisting his agenda, said Sen. Elizabeth Warren (D-Mass.). Manchin said after the lunch that Biden “did a very good job, very respectful.”

As he left the Senate, Biden put his arm around Sen. Raphael Warnock (D-Ga.) as he walked out of his old stomping grounds, engaging in close conversation. Warnock is one of two Georgia senators who handed Schumer the majority with his win earlier this year, and gave Biden the chance at passing a Democratic agenda rather than having to negotiate with Republicans on everything. He’s also up for re-election in 2022.

“It was a brief conversation, very brief,” Warnock said, adding that voting rights was “absolutely” discussed during their chat.

Senate Democrats say that the legislative task ahead is a moment for which Biden was made, after spending nearly 40 years in Congress’ upper chamber.

But Schatz also noted that it isn’t only on the president to get his legislation to his desk.

”This is going to take Leader Schumer, Speaker Pelosi and every Democrat in Congress to act like an adult and understand that we have once in a generation, arguably once in a century, to make the kind of changes we promised,” he said.