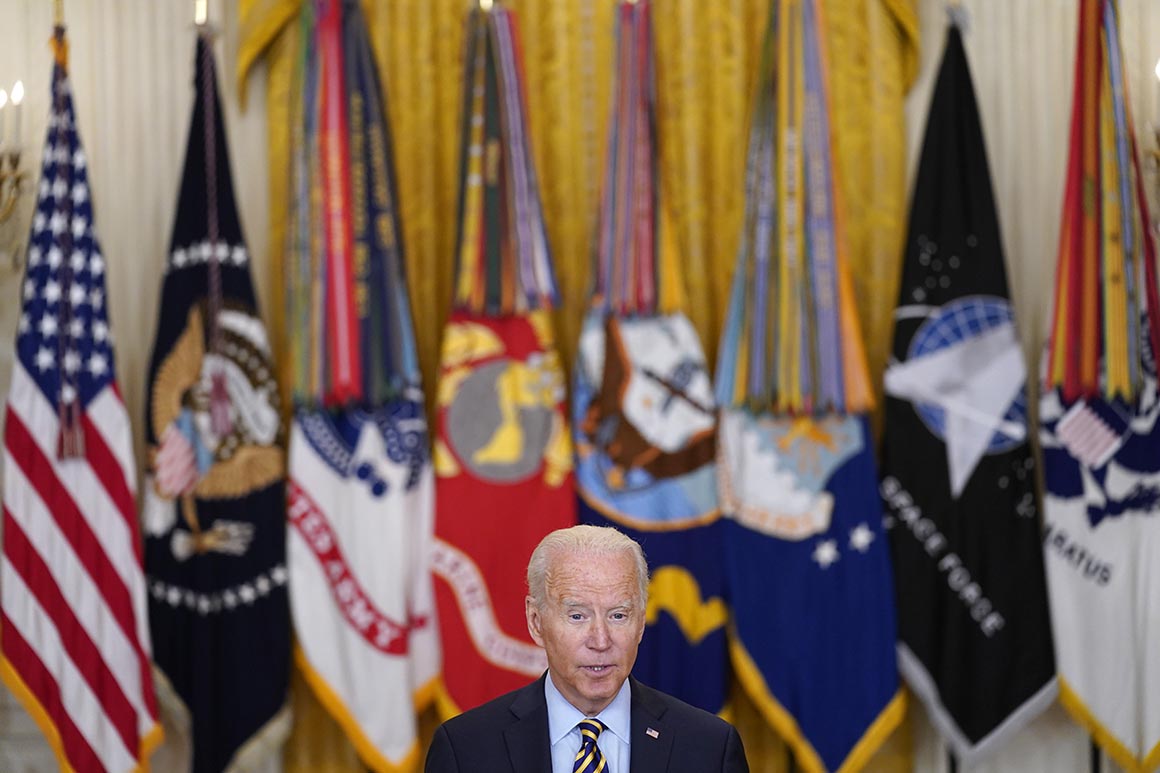 A decade ago, Joe Biden found himself the odd man out, overruled by the generals who convinced then-President Barack Obama to increase the number of America’s troops in Afghanistan.

Now president himself, Biden has not only unapologetically reaffirmed his plan to get troops out of the country after a record-breaking two decades, he has aggressively expedited their withdrawal.

His move makes good on a pledge he made to himself to end a war that he has long viewed as unwinnable. It also implicitly acknowledges the rapidly shifting politics around American military intervention abroad.

Biden’s now-it’s-my-turn-moment — in the form of an announcement Thursday that troops would leave Afghanistan by Aug. 3 — was met with resignation from a large swath of the foreign policy community that has come to believe that withdrawal was, in the end, a defensible decision even if the ripple effects are unknown.

“The whole landscape has changed,” said Brian Katulis, who worked in the Clinton administration and is now a senior fellow at the left-leaning Center for American Progress. “You look at the Republican Party today and it’s not exactly positioned to come after Biden hard on Afghanistan.”

Poll after poll show a majority of Americans supports Biden’s decision. Even many Republicans, including former President Donald Trump, who pushed for a drawdown himself, back a withdrawal. And most Americans, saddled with a raft of health and economic concerns, are simply not paying much attention to a far-away conflict they’ve long ignored.

That’s natural, Biden’s lead pollster John Anzalone said. “At the end of the day, when you have a lot of domestic problems, people naturally want to focus on those domestic problems and that’s understandable considering all Americans have been through in the last 16 months with a pandemic, an economic crisis, a health care crisis, a school crisis, a racial justice crisis.”

Still, some Democrats worry Biden could take a political hit later if the withdrawal leads to further gains by the Taliban, as widely expected, and perhaps even the collapse of the Afghan government in a matter of months. Military leaders have warned of a civil war once U.S. troops have left and that terrorist groups, such as al Qaeda, could regroup in Afghanistan within two years—a possibility Biden entertained during his remarks when he openly speculated that the country could end up divided.

“The likelihood there’s going to be one unified government in Afghanistan controlling the whole country is highly unlikely,” Biden said, implicitly setting the bar for failure at full Taliban control.

Though Biden offered little public reservation about his decision to expedite the withdrawal of forces, a former Biden aide who remains close to the administration said many of the president’s political allies are baffled as to why the president didn’t leave a small contingent of troops in the country.

“They think it could turn into a disaster,” the former aide said. “There is this major belief that the Taliban is going to make the lives of the Afghan people a living hell and it could come back to bite him because he made this decision.”

In interviews this week, several people close to the administration recalled the blowback Obama received after he withdrew American troops in Iraq in 2011 and watched the subsequent rise of the Islamic State in Iraq and Syria.

But Richard Fontaine, a former administration official during the George W. Bush presidency and foreign policy adviser to the late Sen. John McCain (R-Ariz.), said the withdrawal in Afghanistan isn’t likely to hurt Biden politically unless it leads to terrorism threats directly in the U.S.

“If it looks like terrorist attacks in the United States are more likely because Afghanistan is descending into chaos then you got yourself a political issue,” said Fontaine, now chief executive officer of the Center for a New American Security. “As long as things are relatively OK, I don’t think it’s a political issue … unless things really descend into a way that’s dangerous to Americans.”

Biden has long called for ending the war in Afghanistan, arguing that the U.S. mission in the country was—and should have been—limited to routing al Qaeda forces and finding Osama bin Laden. Other presidents have come to the same conclusion: that American troops needed to come home. But they never succeeded in fully pulling back.

Trump spoke repeatedly about ending “America’s endless wars.” But he didn’t fully withdraw from Afghanistan during his presidency. Instead, he set a May 1, 2021 deadline. Biden missed that Trump-imposed date, but he announced in April the U.S. would withdraw all troops by Sept. 11, the 20th anniversary of the terrorist attacks — fulfilling a campaign promise.

In his remarks on Thursday, Biden said the U.S. mission had been accomplished following the dismantling of al Qaeda and the killing of bin Laden, the mastermind of the Sept. 11 attacks, in 2011.

The president would not concede that the Taliban would fully take over the country, despite their seizure of dozens of Afghan districts, insisting the U.S. had helped train hundreds of thousands of Afghan troops to help them try to mount a defense.

“We achieved those objectives, that’s why we went,” he said. “We did not go to Afghanistan to nation-build, and it’s the right and responsibility of the Afghan people alone to decide their future and how they want to run their country.”

Hawkish Republicans have questioned Biden’s decision, including Sen. Lindsey Graham (R-S.C.). “When it comes to understanding the war on terror and the dynamics we face as a nation, President Biden has consistently been wrong,” he tweeted. “I fear that his Afghanistan decision will prove to be his biggest mistake yet.”

But the politics of the war have dramatically shifted in recent years. And even Trump himself praised Biden for the withdrawal, calling it “a wonderful and positive thing to do,” but urged his successor to do it sooner.

“It’s hard for me to think of anyone who may be thinking about running for president in the GOP that would go against the grain of what potentially Trump says,” argued Katulis. “Trump still owns the GOP politically. He’s a kingmaker and Trump, by and large, set the terms of the withdrawal policy.”

But not everyone in Biden’s own party was on board with his decision. Sen. Jeanne Shaheen (D-NH), who is facing a potentially tough reelection fight this cycle, praised the president but said she remained “deeply concerned” by the deteriorating conditions in Afghanistan.

Afghanistan has not been a focus of the Democratic and Republican National Committees or Building Back Together, an outside group focused on promoting Biden’s agenda. There is not a large public outcry across the country calling for withdrawal the way there was during the Iraq war. And just 12 percent of Americans said they were closely following news related to the U.S. presence in Afghanistan, according to an Associated Press/NORC poll last year.

But that doesn’t mean, advocates of staying argue, that the American public can simply wish Afghanistan away.

“The reality is, you know, America has an interest in Afghanistan, and that won’t go away just because our troops go away,” said James Carafano, a former Trump foreign policy adviser who serves as director of the center for foreign policy at the conservative Heritage Foundation. “There’s a reason we were there for 20 years.”