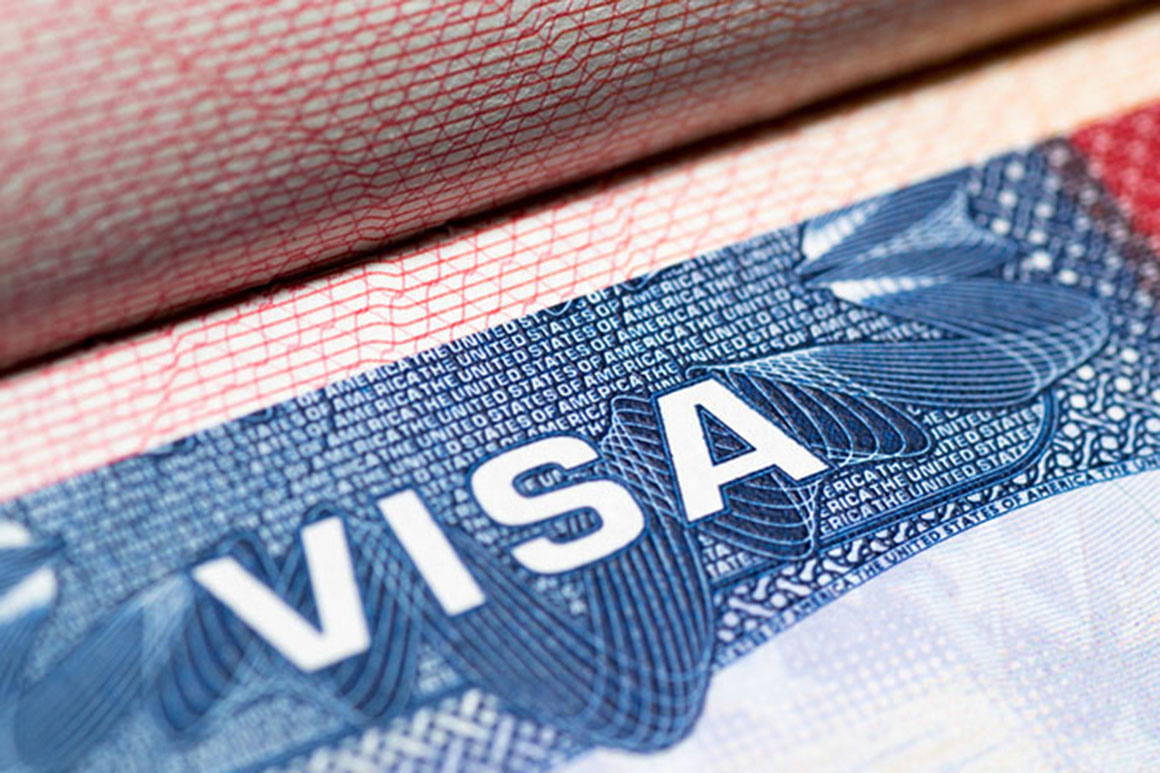 A few years ago, a wavy-haired young man known as “Gregory” played for the Cleveland State University basketball team. He didn’t get much game time, his stats were unimpressive, and he left the school after a year.

Thanks to President Joe Biden, he won’t be shooting hoops again in Ohio anytime soon.

Gregory is the son of Ihor Kolomoyskyy, an oligarch whom U.S. officials allege is so corrupt that he is a threat to Ukraine’s democracy. In March, Secretary of State Antony Blinken announced that Kolomoyskyy and his immediate family would be barred from obtaining U.S. visas. That included Gregory, whose official name is Israel Zvi Kolomoyskyy and who is not the only child of a suspected culprit drawing the ire of the Biden administration.

Since taking office, the administration has eagerly embraced visa bans as a means to punish bad actors overseas for everything from alleged corruption to human rights abuses. And thanks to steps taken by Congress in recent years, the administration is better able to publicize what previously would have been confidential visa decisions. Under Biden, who has been in office less than six months, the State Department alone has announced visa penalties on more than a dozen occasions, affecting well over 100 people in countries ranging from Guatemala to Belarus.

What makes the visa bans extra potent, U.S. officials and analysts say, is that they can be — and often automatically are — applied to the primary target’s immediate family. As a result, officials hope would-be perpetrators will think twice about making a bad move if a spouse or a child could pay a price. The idea is to scare in particular the corrupt moneyed elites who are accustomed to the finer things.

“A lot of these higher-level people, they send their kids to Harvard, they buy property in Manhattan, they vacation in California,” said Gary Kalman, who directs the U.S. office of Transparency International. “They stole a lot of money, and they want to live a good life.”

What’s not certain is whether embracing visa bans will ultimately make a significant difference in the broader struggle to end corruption, human rights abuses and other malfeasance worldwide. Like sanctions that target bad actors’ financial assets, the success of visa bans may be impossible to prove, or even measure over time, officials and activists acknowledge.

Still, initial signs suggest that the Biden administration’s visa decisions are rattling certain circles abroad, a senior State Department official said. Some governments and individuals have strenuously objected to the U.S. announcements, the official said. Some people have turned to U.S. embassies to find out if they could be targeted. Meanwhile, anti-corruption and other activists have cheered the moves.

Whenever Washington unveils a visa crackdown, “we observe reactions within the elite or the people doing bad things of anxiety and concern about the fact that the U.S. government is doing this,” the official said, adding that at times the moves lead to “paranoia” in some corners about whether they could be next.

Unsafe in the West

Past U.S. administrations have turned to visa bans for a variety of reasons.

Former President Donald Trump began his tenure by banning visas for people from several Muslim-majority countries on questionable national security grounds. His administration became famous for its relentless use of economic sanctions, but it also took advantage of legislation to impose numerous visa restrictions — targeting more than 150 people, by one count in 2020. It imposed visa bans on, among others, leaders of the International Criminal Court for looking into U.S. actions in Afghanistan and on Chinese officials for a variety of activities.

It’s difficult to compare various administrations’ use of visa bans because of confidentiality laws that mean many bans are never made public. Even today, the State Department, citing those laws, declined to offer statistics about them, although officials there confirmed they’ve been hiring more staff to deal with economic sanctions and visa bans overall.

Still, there’s no question that the Biden administration is using visa bans at an unusually rapid pace while taking advantage of laws that allow it to be more public, analysts and officials said.

In mid-June, for instance, the State Department announced that it was imposing visa restrictions on former Namibian government officials Bernhardt Esau and Sakeus Shanghala, alleging they were involved in “significant corruption.” The department went on to name the immediate family members whom the ban would also affect.

It has made similar announcements about a pair of Iranian interrogators suspected of human rights abuses, a Paraguayan lawmaker accused of corruption and a former Albanian president, also on corruption claims.

The Kolomoyskyy case was an early and high-profile example. Ukrainian anti-corruption activists are especially thrilled with the fact that the Biden team went public, naming the oligarch, his wife and children. The family patriarch faces a federal money-laundering investigation in the United States.

“The difference is huge. The impact is huge,” said Daria Kaleniuk, executive director of the Anti-Corruption Action Center in Ukraine, said of the public humiliation factor. Based on her group’s sources and observation of votes, among other things, “right after this decision, people, specifically members of Parliament who were influenced by Kolomoyskyy, they started to limit relations with him and influence by him,” Kaleniuk said.

Kaleniuk urged the Biden administration to synchronize such visa bans with other governments and entities, particularly the European Union, Britain and Switzerland, so that people like the Kolomoyskyys will be robbed of the ability “to go on vacation to Spain, to send their kids to study in London, to go shopping in Vienna and to have a house in Switzerland.”

“If that ability is taken away to feel safe in the West, then their motivation to continue these wrongdoings in Ukraine will be quite lower,” she said.

A lawyer who has represented Kolomoyskyy did not reply to requests for comment and POLITICO’s efforts to reach him and his son through other means, including Facebook, were not successful.

Naming and shaming can be powerful, but secrecy and ambiguity have advantages, too, the senior State Department official said.

When the department says it will crack down on visas for a particular group of people without specifying names — such as people “responsible for, or complicit in, undermining the peaceful resolution of the crisis in the Anglophone regions of Cameroon” — it adds to the paranoia among some potential culprits and their families, the official said.

In February, as part of a series of announcements related to punishing Saudi Arabia for the killing of journalist Jamal Khashoggi, Blinken announced the creation of the “Khashoggi Ban.” That ban bars from the United States foreigners who, on behalf of their governments, harass and otherwise pressure dissidents beyond their country’s borders.

Blinken said 76 Saudis were immediately barred under the Khashoggi Ban. He warned that their relatives, too, could face the same punishment. He did not name them publicly, but, citing various legal texts, left open the possibility that such privacy isn’t always guaranteed.

The sins of the father

Former U.S. officials and analysts say there’s regularly internal government debates over whether to punish other people for the actions of the main culprit. After all, is it fair to blame a child for a parent’s sins?

Often, though, there’s evidence that the main target of the sanctions is hiding his or her assets in the name of a spouse or a child. There’s also the likelihood that the spouse or child are using ill-gotten gains to shop or pay their college tuition. Some colleges may even admit certain students in the hopes of getting future donations from their wealthy, if corrupt, parents.

“There is valid, important debate about sanctioning family members, but we do think it can be an important and powerful tool when used correctly,” said Annie Boyajian, director of advocacy for Freedom House.

The Biden administration is currently reviewing the U.S. sanctions landscape left behind by Trump, whose administration relentlessly used economic sanctions against individuals, government bodies and other entities with unclear results.

Imposing economic sanctions typically requires U.S. officials to meet higher levels of evidence than visa bans. Given that Biden and his aides are trying to show they are serious about their pledges to crack down on global corruption and other wrongdoing, banning visas is arguably the most convenient stick at their disposal.

Still, there are signs that the administration is willing to go beyond just visa bans.

Just last week, the administration unfurled a new round of economic sanctions against Myanmar figures whom it has linked directly or indirectly to the coup in the Asian country and ongoing violence there. Of the 22 people sanctioned, 15 are the spouses or adult children of military officials. Imposing economic sanctions on relatives of targets is unusual, but not without precedent.

All of the 22 sanctioned face U.S. asset freezes and other prohibitions that could make it hard for them to use the global financial system. And while the Treasury Department, which unveiled the sanctions, didn’t mention it, it’s unlikely these people will now be issued U.S. visas.

There’s been solid bipartisan support on Capitol Hill for using visa bans to target perpetrators. That’s particularly true on the anti-corruption front. Fighting global corruption is a top priority for Biden, and it’s an idea that has spurred a buzz of activity in Congress, including the recent launch of a “counter-kleptocracy caucus.”

Paul Massaro, a policy adviser for the Commission on Security and Cooperation in Europe, better known as the Helsinki Commission, is among those urging lawmakers to further close America’s doors to bad actors worldwide.

U.S. visa bans may not offer “as much justice as arresting these guys and putting them on trial,” Massaro said, but they are still “powerful.”

One U.S. law that gives authority for visa bans is Section 7031(c) of the Department of State, Foreign Operations, and Related Programs Appropriations Act. In recent years, Congress has adjusted that provision to allow for more public disclosure of whoever is being targeted, and the Biden administration has repeatedly used it.

Another major source of authority for visa bans in the Immigration and Nationality Act. Legislation dubbed “the REVEAL Act” is in the works to incentivize the executive branch to make public more of the visa-related moves it makes using that law.

Other proposed bills related to visas also are in the works, including a bipartisan one aimed at preventing abuse of a program that gives visas to foreigners who invest a significant amount of money in the U.S. economy. That bill comes amid growing concern that corrupt foreigners are using American businesses to launder ill-gotten funds.

Among the people facing such allegations is Ihor Kolomoyskyy, whose financial interests go well beyond Ukraine. In fact, they go at least as far as Cleveland, Ohio, where his son used to play basketball and, according to Cleveland State, was a student from summer 2018 through spring 2019.

Ihor Kolomoyskyy is under federal investigation, suspected of buying commercial real estate in Cleveland and other places in the United States using misappropriated funds from a Ukrainian bank. The Department of Justice alleged it was all part of “a multi-billion-dollar loan scheme.”

The tycoon’s 6’4’’ son, however, did not abandon his basketball dreams after leaving Ohio. He’s been playing for a Ukrainian professional club.