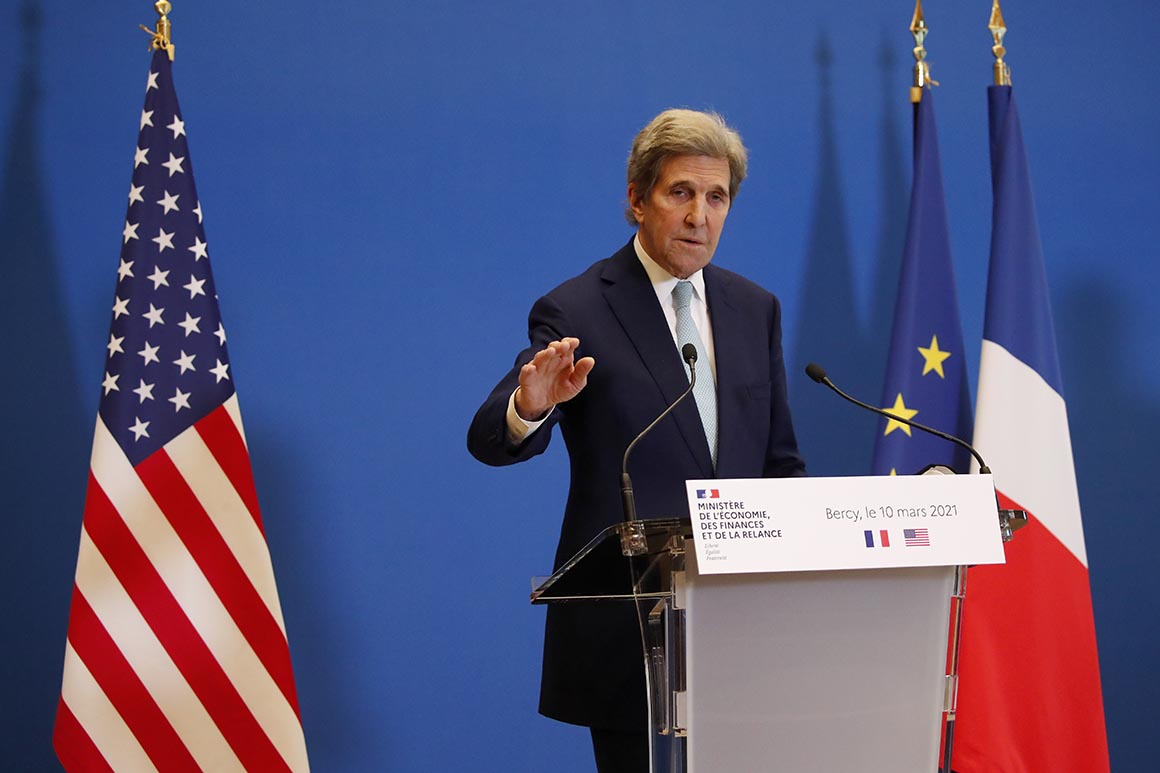 A brewing carbon trade war with Europe threatens to scuttle President Joe Biden’s hopes for cross-Atlantic harmony in the fight against climate change.

The European Union’s leadership is set to unveil a proposal on Wednesday to tax imports from countries — including the U.S. — that lack aggressive carbon-reducing policies. That move has sparked fears that protectionism will derail hopes for a new era of international climate change cooperation ushered in by Biden’s presidency.

The Biden administration is wrestling with how to respond to the new tariff threats, even as it works with the EU to remove trade barriers that former President Donald Trump had slapped onto European goods like steel and aluminum.

“You could bring back the kind of trade frictions that have been characteristics of the U.S.-EU relationship with tit-for-tat solutions, and I think that’s a problem,” said John Podesta, who was President Barack Obama’s top climate adviser and is in frequent contact with Biden officials. “The bilateral relationship between the U.S. and EU democracy is perhaps the most important relationship now to create a structure for solving these global problems, and that’s why this is sort of a test case for that. Can we get our act together now?”

Biden has made addressing climate change one of his administration’s top priorities, but the U.S. is miles behind the European Union, which has created a bloc-wide carbon trading system to wean itself off the greenhouse gas that plays the biggest role in warming the planet. As the EU tightens its regulations on carbon emissions, it’s wary of allowing foreign companies that face no climate-related costs at home to flood its market with cheaper goods.

The tariffs the EU is expected to propose on Wednesday will leave Biden with a grim set of options. The White House could take a page from Trump’s trade playbook and impose its own retaliatory tariffs, or it could seek to challenge the EU’s move by resurrecting the World Trade Organization’s hobbled dispute resolution body, an option sharply opposed by U.S. climate policy advocates.

“Are we really going to let an unelected international body dictate whether we act on climate and jobs? That would be insane,” said National Wildlife Federation CEO Collin O’Mara, who is close to the White House climate team and said he has discussed the trade topic “more in the past two weeks than in the last two years” on the Hill and with the administration.

Much of the conversation in U.S. climate policy circles centers on how to act on the vague promises Biden made during last year’s campaign to slap fees on carbon-heavy imports. The imminent EU proposal has pushed environmental groups and the Biden administration to speed up their policy discussions after dialogue with EU officials failed to slow the tariff rollout, as U.S. officials had hoped.

Both the EU and the U.S. insist any climate trade policy must remain compliant with WTO rules. Podesta said the EU had pushed for the WTO to facilitate a conversation with the U.S. over the carbon tariffs.

But the WTO is essentially mothballed since the Trump administration blocked the appointment of new members to fill its appellate body. The Biden administration hasn’t been enthusiastic about its track record, and its trade policy agenda noted the U.S. Trade Representative would address “systemic concerns” with the WTO’s appellate board that has been defunct since 2019, chiefly over disagreements with how it handled tariffs.

Green groups worry that the WTO has also tended to ignore environmental issues when deciding disputes.

“The WTO track record on climate and environmental protections hardly inspires confidence that this body should be issuing pronouncements on countries’ efforts to tackle the climate crisis,” said Ben Beachy, director of the Sierra Club’s living economy program.

The EU plan is expected to impose fees on imports of aluminum, steel, electricity, cement and some fertilizers that come from countries that lack their own domestic measures to fight climate change, according to a leaked draft obtained by POLITICO.

As well as protecting the EU’s own industries, the move is designed to prod the bloc’s trading partners to adopt carbon pricing systems or comparable measures, although it could be difficult to judge whether systems would be weaker or stronger than the EU’s own carbon rules.

Climate policy advocates worry that tariffs are a blunt and aggressive instrument that are likely to trigger a backlash.

Climate policy veterans Podesta and Laurence Tubiana, the French diplomat who helped strike the 2015 Paris climate agreement, have attempted to reduce friction among the allies and avoid a repeat of the EU’s 2012 decision to unilaterally tax airline emissions for all flights entering or leaving the bloc. That fee brought fierce opposition from U.S. airlines and the Obama administration.

The two brought senior EU and U.S. officials together in May for backchannel discussions about the border taxes, said Trevor Sutton, a senior national security fellow at the Center for American Progress, the think tank founded by Podesta. Sutton said the meeting highlighted the sharp differences in the climate policies between the EU and the U.S., and that Europe was well on its way to finishing its proposal, while the Biden administration had barely begun to design its policy.

“The EU has thrown down the gauntlet. They’re going to do it. It’s going to send shockwaves,” Sutton said. But the design of the policy will probably draw a WTO challenge, Sutton noted, leaving many U.S. environmental groups thinking that crafting a climate-related policy meant to assuage the WTO is not worth worrying about when almost anything will attract an objector.

“When you talk to some of the green folks here, their mindset is ‘f— the WTO,’” he said.

People with knowledge of the discussions with the U.S. government on how to respond to the EU say U.S. Trade Representative Katherine Tai and her team are taking lead, with help from the National Security Council, Commerce Department, national climate adviser Gina McCarthy and special presidential climate envoy John Kerry’s office at the State Department.

Kerry said in March that he was “concerned” about a carbon border tax and called it “a last resort” that could inflame tensions heading into pivotal U.N. climate talks in November. Dialogue between Kerry and his EU counterpart Frans Timmermans have continued, with Kerry subsequently softening his comments to voice reservations about “downstream” economic effects.

Sue Biniaz, a top official in Kerry’s office at the National Security Council, has bristled at unilateral EU action, according to a person familiar with her thinking. That person said Biniaz believed the EU’s emphasis on trading partners aligning with its emissions trading system focused more on policy outcomes than climate benefits, which raised questions about its WTO compatibility.

The EU has since backtracked a bit, indicating it would allow the U.S. and other nations that lack a national carbon price to potentially avoid tariffs if they implement other regulatory measures, though it remains insistent that any corresponding policy comply with WTO requirements. In that context, trade experts told POLITICO, other nations would need a national carbon price to link with the EU’s system — if the WTO even approved the EU regime, which is questionable given its reliance on emissions allowances to industry.

“Our partners might use different methods, they might use regulation, they might use taxation, it doesn’t matter what sort of measure you take, if you undertake measures to make sure that you aim for the same goal, which is climate neutrality by 2050, then you can avoid being targeted by a carbon border adjustment mechanism,” Timmermans said at an event last month.

The Biden administration will likely swing back. Tai, whose office touted carbon border tariffs in its annual strategic plan, has refused to rule out retaliatory measures. Her office did not comment for this story.

Some environmentalists and progressives are pressing USTR to consider the type of trade tactics the Trump administration deployed, using climate change as a national security justification. Some suggest that Section 232 tariffs, which Trump used against EU steel and aluminum, and 301 tariffs would accomplish those objectives because U.S. companies that produce steel and other items emit fewer greenhouse gases than many foreign competitors, including those in EU and China.

Challenges to the WTO would be unable to thwart such Trump-style reprisals, because the trade body’s moribund appellate board is unable to adjudicate disputes.

“Trump showed that the world doesn’t fall apart when you start taking a more interventionist approach,” said Todd Tucker, director of governance studies at the liberal Roosevelt Institute, which has advocated for trading partners to agree on a common carbon tariff on goods from countries that fail to reduce manufacturing emissions. “He actually did something, and it actually improved the profitability of domestic companies.”

Some groups have said that since goods sold by U.S. exporters tend to have a lower carbon profile than their overseas competitors, they would fare better under a carbon border tax than others outside of Europe.

The Blue-Green Alliance, a coalition of environmental and labor groups, has argued to the administration that union workers would reap economic gains from a border tax, with the U.S. Steelworkers labor union heavily in favor.

And the Climate Leadership Council, a bipartisan group that includes large oil and gas producers and supports a carbon tax, made that case in a briefing with administration and White House officials who offered a “unilaterally positive” reception, said Catrina Rorke, the group’s vice president for policy. The council found that U.S. goods are 40 percent more carbon-efficient than average, besting China and India by three and four times, respectively.

“We saw a lot of unilateral action sort of outside of what you would call consistent with the WTO” during the Trump years, she said. “People are testing the boundaries of what they can achieve.”

Paola Tamma and Kalina Oroschakoff contributed to this report.