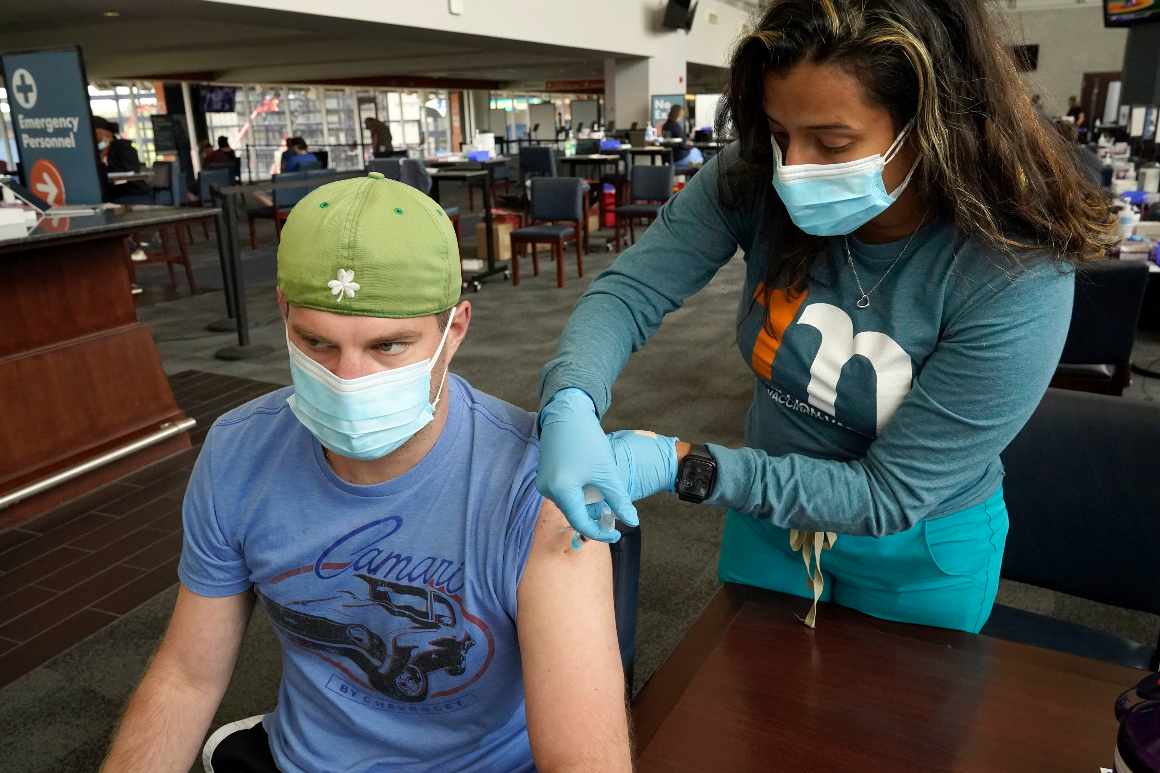 The Biden administration is running out of ideas for jumpstarting the pace of coronavirus vaccinations, raising the prospect that more than a quarter of American adults could still be vulnerable to the virus into the fall.

The federal immunization campaign has slammed into rising partisanship and deep resistance among the 91 million adults who remain unvaccinated, turning what was once an all-out sprint into a marathon with no clear end in sight.

Even as President Joe Biden vows a “neighborhood-by-neighborhood” vaccination effort, a half-dozen federal and state officials working on the Covid-19 response acknowledged in interviews that none of their outreach efforts are likely to supercharge vaccination rates — and that there are few remaining options to try.

The administration is now strategizing over how to manage a nation with 68 percent of the population at least partially vaccinated, where pockets of the country will be subjected to periodic outbreaks while the majority of Americans move on.

Officials foresee a grinding effort to convert people one shot at a time that could last for months, and that risks being complicated by growing Republican resistance to what was once a largely bipartisan bid to get the country immunized.

“We are under no illusions that each person in this stage will take longer to reach,” said a senior administration official. “The first 180 million were much easier than the next five million.”

The shift comes as the more transmissible Delta variant is driving a resurgence of Covid-19 cases and hospitalizations within unvaccinated communities across the U.S. In the days after Biden celebrated a July Fourth he said marked “independence” from the virus, daily new vaccinations reached six-month lows.

It’s a slowdown that administration officials argue was inevitable, and a side effect of the government’s largely faster-than-anticipated vaccine rollout. The rapid deployment left a surplus of shots by summer and prevented possibly hundreds of thousands of additional deaths while easing the pressure on local health departments and hospitals.

Yet as the pandemic recedes and officials concentrate on the holdouts, their efforts are being made increasingly difficult by conservative politicians and pundits who’ve ramped up criticism of the vaccination drive.

Most recently, the administration scrambled to tamp down backlash to Health secretary Xavier Becerra’s insistence that “it is absolutely the government’s business” to know which Americans have been vaccinated — an episode described as frustrating for officials already trying to combat misinformation surrounding the vaccines.

Since April, the gap in vaccination rates between counties that voted for Biden in the 2020 election and those that went for former President Donald Trump grew by five times, according to a Kaiser Family Foundation analysis.

The White House in the meantime is redoubling efforts to convert the unvaccinated by intensifying outreach programs and further expanding the vaccines’ availability, all while adopting an increasingly urgent tone.

Still, there is little expectation of major breakthroughs or sharp increases in the vaccination rate. Nearly everyone eager to get a vaccine has already gotten one, polling shows. Within the White House, officials believe that only about a third of those who remain unvaccinated are in the “wait and see” mode most likely to be persuaded to get a shot.

“We were spoiled in a sense by the early numbers, because that really represented all of this pent-up demand for the vaccine,” said Richard Besser, CEO of the Robert Wood Johnson Foundation and a former acting Centers for Disease Control and Prevention director.

And while there’s still opportunity for progress, “there is a core group in every segment that has lower vaccination rates where there’s just not going to be any movement,” he added.

Biden officials are embracing a mantra that the senior administration official described as “every single shot matters.” After hitting a series of high-profile vaccination milestones, the focus is shifting away from speed and toward a less quantifiable measure of success: the returning feel of normalcy.

“Every person we can get vaccinated at this point is another person protected,” the official said. “You’ve got to be realistic that people in this phase are going to take a little bit longer.”

It’s a tacit admission that, outside of an anticipated surge of vaccinations when young children become eligible for the shot, there’s little left to drive fresh demand.

Though a range of prominent health experts contend the Food and Drug Administration could prime demand by fully approving the vaccines, there’s skepticism within the administration that millions are holding out until the agency gives its final endorsement.

And while the White House has taken pains not to get involved in the FDA’s processes, officials said they don’t expect the vaccine approvals to come through until at least the fall, as the agency evaluates data submitted on a rolling basis by the drug manufacturers.

Another potential conduit for accelerated vaccinations — primary care doctors — has not expanded as quickly as some had hoped, with some physicians hesitant to turn their practices into vaccine distribution points when the shot is already widely available elsewhere. Others have embraced the effort, only to be forced to throw away much of the multidose vials after vaccinating only a couple patients in a day.

Biden’s Covid-19 response team has instead turned its recent focus on driving up the vaccination rate for younger Americans. Officials believe a significant number are still open to getting the shot but haven’t gone out of their way to seek it. 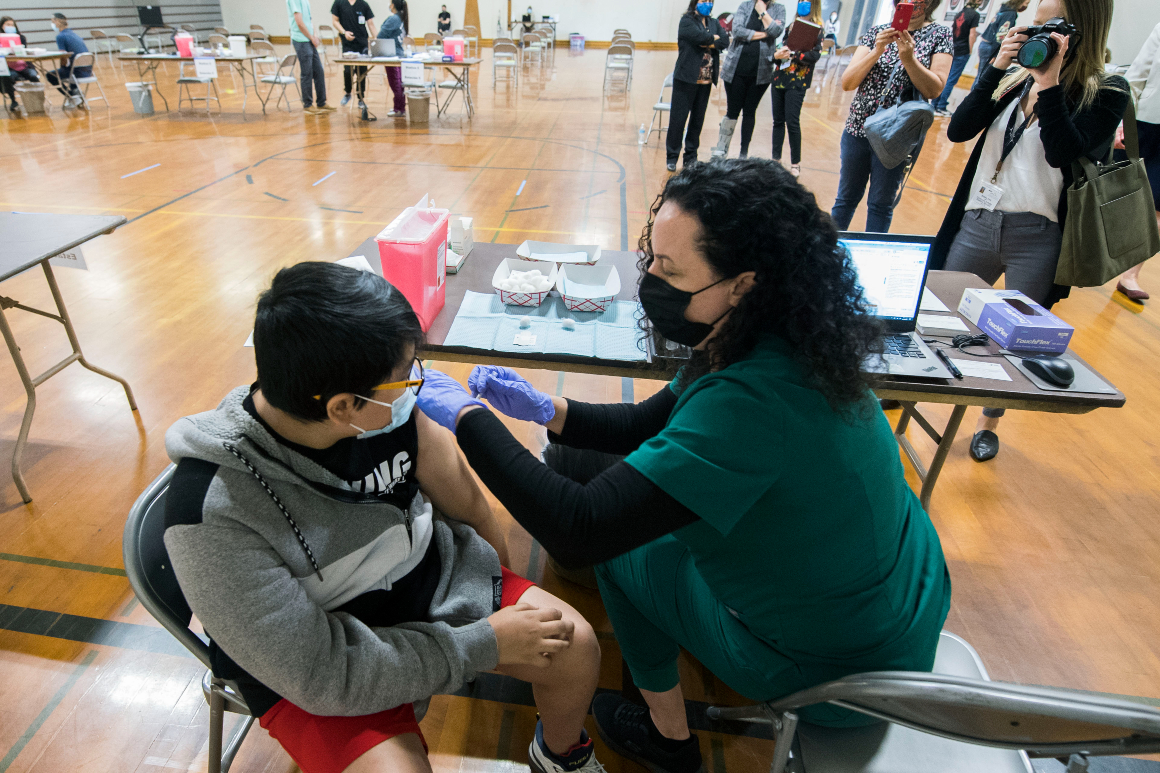 Jeff Zients, the White House’s Covid-19 response coordinator, and other federal officials have met privately in recent weeks with various school associations to encourage them to turn their individual schools into vaccination sites — and get eligible students their shots well before classrooms open up in the fall.

“Schools are trusted places, not only for the children and the youth but for the parents and community members,” said John Bridgeland, the co-founder of COVID Collaborative, which has worked with the administration on vaccine messaging efforts.

The administration has similarly coordinated with business groups, in a bid to convince more employers to encourage their workers to get vaccinated.

But the process is already fraught with politics. Universities in GOP-led states have already faced intense blowback for mandating that students get vaccinated before returning to campus, and similar requirements instituted by hospitals have drawn protests.

At some high schools and businesses, even the prospect of administering vaccines voluntarily has become a political flashpoint.

“It’s just: We’d love to do it, but I’ve got parents that are up in arms against it, or my board is not for it,” Dan Domenech, executive director of the American Association of School Administrators, said of the lament he’s gotten from some superintendents.

The one option sure to spark mass vaccinations is also the one federal and state health officials are loath to discuss: widespread mandates. In public and private, administration officials have stressed that they’ll only go as far as encouraging people to get the shots, wary of hardening opposition and fueling conspiracy theories.

State officials, meanwhile, are bracing for the community-by-community debate over mandates likely to break out once the vaccines are fully approved.

“What we’d like to do is get another 10 percent quickly done,” said Marcus Plescia, chief medical officer for the Association of State and Territorial Health Officials. “Maybe mandates would do that. But I don’t know that it’s worth it for the amount of backlash we’d get.”

Within the White House, there’s little discussion of a defined end game for the Covid-19 response — even as cases drop and Biden pivots increasingly toward revving up a post-pandemic economy.

Rather, Biden’s team expects the vaccination effort to gradually fade into the background over the long term, as the splashy rollouts and big ideas that marked the first six months morph into a slow, steady campaign to get more shots into arms.

“We’re at a point in the pandemic where things are a little bit more one by one,” the senior administration official said. “It’s definitely not as sexy to routinize Covid vaccinations, but it’s just as important.”