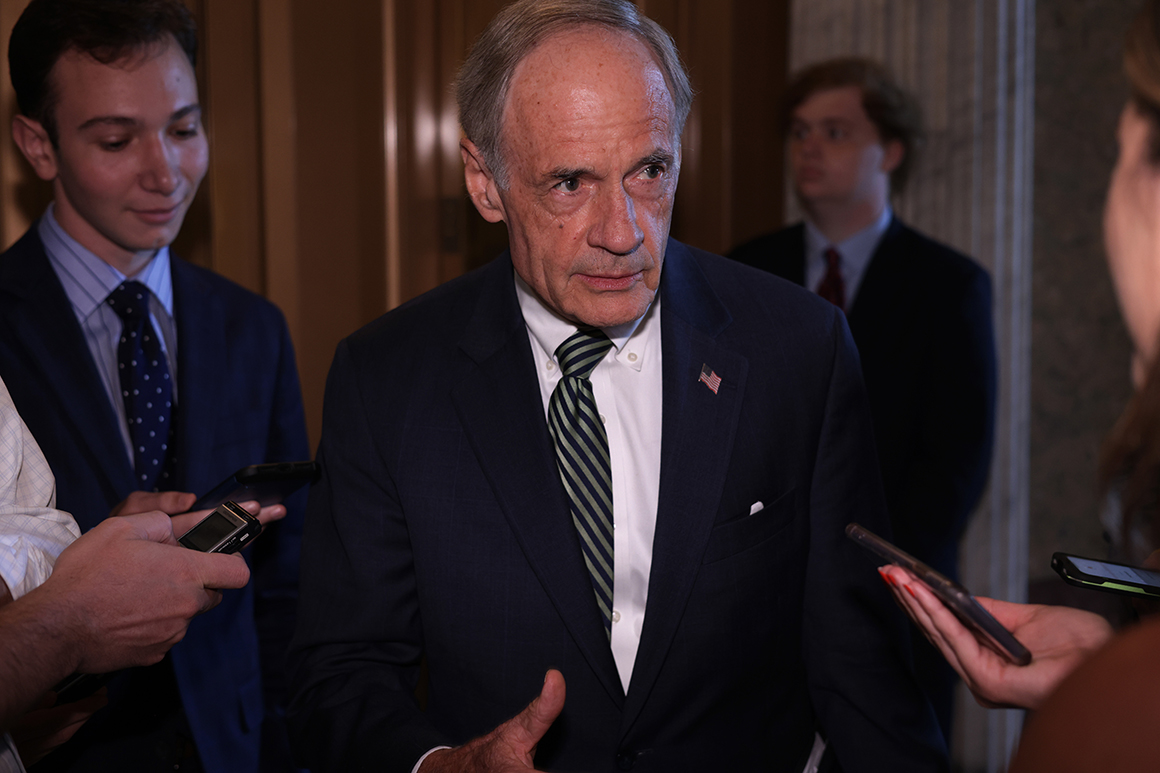 The bipartisan infrastructure negotiations entered their darkest phase in more than a month on Monday, with the parties openly feuding over policy and former President Donald Trump urging Republicans to drop the effort altogether.

Democrats and the White House on Sunday night offered a proposal to Republicans asking for a compromise on highway and public transit funding, as well as several other unresolved areas.

Senate Republicans panned Democrats’ latest offer, a bleak sign for the talks ahead of another pivotal week of negotiations in the Senate.

“The ‘global offer’ we received from the White House and [Majority Leader] Chuck Schumer was discouraging since it attempts to reopen numerous issues the bipartisan group had already agreed to,” said a GOP source familiar with the negotiations. “If this is going to be successful, the White House will need to show more flexibility as Republicans have done and listen to the members of the group that produced this framework.”

Two additional sources close to the talks, one in each party, confirmed the dire state of negotiations on a signature priority of President Joe Biden. Each blamed the other side for reopening debate on items once considered settled.

The talks seem in danger of collapse given the public acrimony and finger-pointing on Monday, after a fruitless weekend of discussions. The group of 10 senators leading the talks will huddle again on Monday evening, in an attempt to rescue the fragile negotiations.

The bipartisan group of lawmakers hoped to reach a final agreement by early this week after a vote to advance undrafted legislation failed last week. But that appears unlikely, with several issues outstanding. Among the biggest sticking points is transit, but broadband has also become a point of contention. The bill’s finances are also viewed as shaky.

A Democratic source familiar with the bipartisan discussions said that Democrats’ counteroffer included accepting the GOP proposal for highways in exchange for the Democratic proposal on transit. But Republicans dispute that characterization. A GOP source familiar with the negotiations said the choice isn’t binary and that the GOP offer on transit “was met with silence for three days.”

Funding for water infrastructure also remains unresolved, according to a Democratic source familiar with the talks, who accused Republicans of backing away from the original agreement. That source said that Sen. Mitt Romney (R-Utah) had reneged on a deal and “proposed something completely unworkable.”

A spokesman for Romney called that “laughably false” and said Schumer is seeking $15 billion more than a previous agreement.

Senate Environment and Public Works Chair Tom Carper (D-Del.) and Sen. Tammy Duckworth (D-Ill.) both raised concerns about the funding last week, with Carper suggesting he would have a hard time supporting the package unless certain funding conditions were met.

As bipartisan negotiators aim to finalize an agreement, former President Trump also weighed in Monday morning. In a statement, Trump said that Senate Republicans “are being absolutely savaged by Democrats on the so-called ‘bipartisan’ infrastructure bill’” and urged them to wait until they take back the Senate in 2022 to “regain a strong negotiating stance.” Trump tried unsuccessfully to cut a deal with Democrats on infrastructure, sidelining negotiations once his impeachment investigation began.

Although the bipartisan group and the White House announced an agreement last month on a bipartisan framework, translating it into legislative text has proven to be a challenge. Schumer has said that he intends to pass the bipartisan bill and begin the process for Democrats’ $3.5 trillion social spending package before the Senate leaves for the August recess.

Eleven Senate Republicans wrote Schumer last week to tell him they’d be ready to move forward as soon as Monday, provided the bill was mostly completed and its finances were in order. Neither condition was met as of midday, with senators convening late in the afternoon.