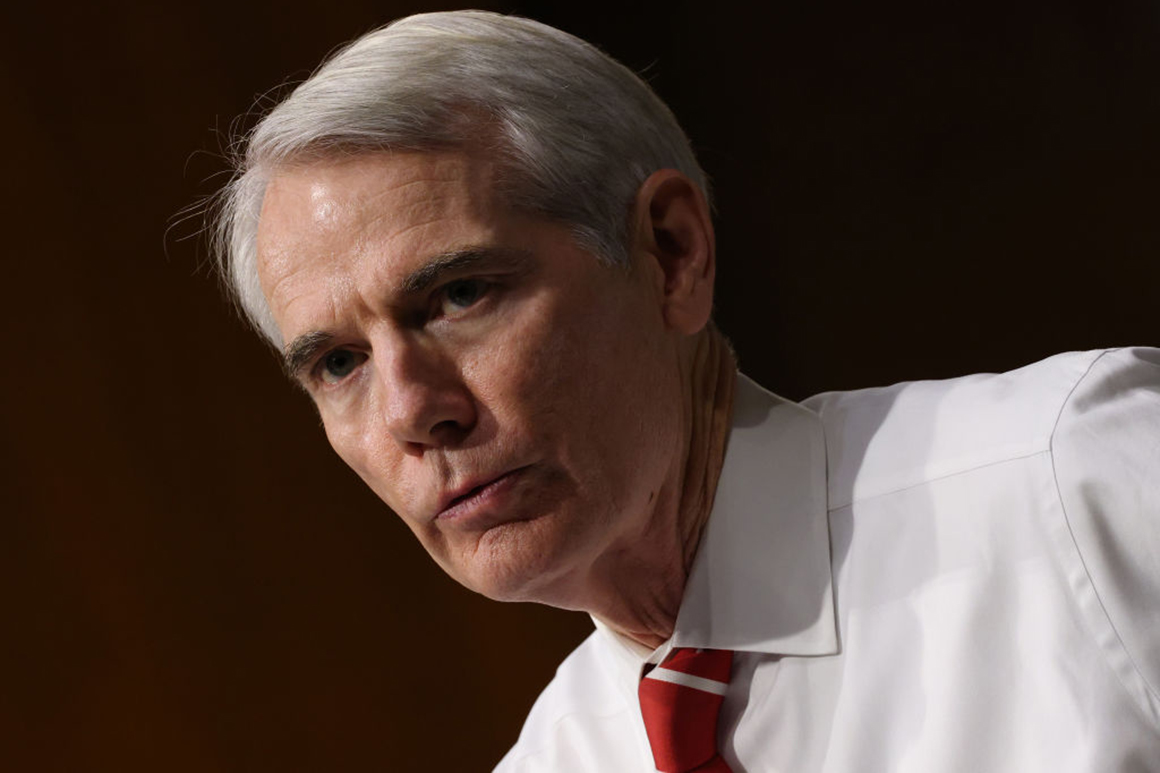 If you called central casting for a senator to cut a bipartisan infrastructure deal, you’d get Rob Portman.

The Ohio Republican, a former White House budget chief with two terms under his belt as well as the ear of Minority Leader Mitch McConnell, is an ideal bridge between his party’s two wings. Portman acquitted then-President Donald Trump in his second impeachment trial but later backed an independent commission on the Jan. 6 Capitol riot. And a looming retirement from Congress frees Portman from the political burden of facing voters next fall, leaving him able to shrug off Trump’s attacks on his work.

Yet Portman is finding it hard to clinch an agreement, no matter how much insider savvy he brings as the lead GOP infrastructure negotiator. Even if an infrastructure bill can be written, Portman still must shepherd it across the floor and to President Joe Biden’s desk amid attacks from his own party.

It’s the kind of legacy-defining challenge he has long sought. But Portman warned his colleagues on Tuesday at a party lunch that everything could fall apart: Though he’s optimistic, he said the deal could still blow up and alleged that any collapse would be on Democrats’ shoulders, according to two sources familiar with the meeting.

Democrats will be happy to return the favor and blame Portman because there’s entrenched skepticism within the caucus that he can hit such a massive target and deliver 10 GOP votes. Still, Portman said in a Tuesday interview that he’s not going to walk away as talks turn hairy.

“It’s much more comfortable to stay on the right and the left and be negative,” he added, taking the subtlest of shots at his critics in both parties. “What takes courage is to find that middle ground and embrace the fact that our job here is not to simply express our points of view through our partisan rhetoric. Our job is to actually get beyond that and accomplish something.”

The bipartisan group of senators, sensing an impending impasse in collective negotiations, tapped Portman to finish the job with White House counselor Steve Ricchetti — a role that puts even more pressure on Portman. He said it’s “overstated” to assume it’s just him and Ricchetti making the big decisions: “We’re physically sitting down and trying to work out these issues, but we’re both checking back with our respective groups.”

The mild-mannered Portman is a veteran U.S. trade representative, tax wonk in the House and now a senator with seniority and stature, the furthest thing from a bomb-thrower built for the Trump era. Portman was handily re-elected in 2016 but chose retirement over navigating the post-Trump landscape in the GOP.

Senate Democrats still question whether the buttoned-up Ohioan can take the risks required to reach a deal with nearly $600 billion in new spending that’s bound to anger the right. Several of Portman’s colleagues in the majority privately criticized his legislative courage but didn’t do so out loud, lest it upset the fragile talks.

Sen. Debbie Stabenow (D-Mich.) said she’s worked well with Portman but that the “proof is in the pudding” whether he can deliver on infrastructure. Sen. Elizabeth Warren (D-Mass.) added: “I will believe there’s a deal when I see there’s a deal.”

“Everybody’s wondering: What’s his end game? What’s the impact of him getting ready to retire? What’s the impact on his long-term relationship with McConnell?” said one Senate Democrat, speaking candidly on condition of anonymity. “There’s a general suspicion … why is this taking so long?”

It’s already been a month since Portman joined Biden and his fellow nine negotiators to unveil a framework. Now he has an opportunity to complete that work, shaping his party in a more conciliatory mold and dispelling Democratic suspicions that he and fellow Republicans only want to slow the president down.

First, he has to deliver.

“He’s got the horsepower from the policy standpoint. But he’s also got the right temperament,” said Senate Minority Whip John Thune (R-S.D.), who added that if Portman can’t seal the deal, then “nobody can, I don’t think. He’s probably the perfect guy on our side for this.”

Portman was a lead negotiator on arcane battles over tax cuts and Obamacare repeal and has led the Senate’s work on fighting opioid addiction. His office boasts that he’s helped shepherd 150 bills into law since assuming office in 2011.

Though he’s a reliable Republican vote, he has tacked to the center on several issues, notably opposing Trump’s national emergency declaration at the border and working with a bipartisan group of senators last year on a coronavirus relief package.

But Portman is not a traditional moderate and can be a tough vote to get. His 2013 efforts to insert an e-Verify amendment in the Senate’s bipartisan immigration bill ran aground as Democratic leaders sought to fold it into the larger bill instead of giving Portman the standalone vote he hoped for. Portman ended up voting against the bill, leaving Democrats livid.

He also opposed both of Trump’s impeachment trials, though he did work with Sen. Susan Collins (R-Maine) on a compromise during the failed effort to start an independent Jan. 6 commission. As that effort fell apart, Portman stepped into his lead role with Sen. Kyrsten Sinema (D-Ariz.) on funding roads, bridges and broadband.

Sinema described Portman as “super nerdy. And I mean that as a compliment.” She said she had no reservations about his ability to finish the legislation and get it into law.

“We were talking about this, like, kind of alone in his hideaway months ago,” she recalled. “I don’t know why you would [walk away] if you weren’t interested in taking this to the finish line. He’s the one who is selling to his conference. And he will be the person that continues to do that.”

While Portman is leading a bipartisan group of 10 senators on infrastructure, some in the chamber are skeptical that rank-and-file members can replace the knowledge of committee chairs who might normally take the lead on a massive bill like this. Sen. John Cornyn (R-Texas) said that formula is “rife with a lot of problems.”

“When you have these negotiations and the gangs, there’s no mechanism that forces people off of dead center and you’re in pursuit of this mythical consensus,” Cornyn said.

Should Portman strike a bipartisan deal, he will then have to ensure that Republicans sign on. Trump is growing increasingly vocal against the infrastructure talks and McConnell has yet to weigh in, only telling his caucus to view the bipartisan deal as separate from Democrats’ $3.5 trillion social spending package. Making matters harder for Portman, the Wall Street Journal editorial page recently described the infrastructure package as the “most one-sided bipartisan deal in decades.”

Sen. Ron Johnson (R-Wis.) said he didn’t know why any Republican “would be complicit” in cutting a deal on infrastructure knowing full well Democrats plan to pass a subsequent multitrillion-dollar spending bill on social programs, fighting climate change and raising taxes on the wealthy.

While acknowledging his balancing act is a difficult one, Portman said it was harder to talk across the aisle on health care, taxes or even on trade issues: “I’ve negotiated with China. I’ve been in much tougher negotiations.”

“This is difficult as all bipartisan negotiations are these days — more difficult than it used to be because both sides tend to go into their corners,” Portman said. “If it was health care, tax cuts, I’d feel differently about it. But this is infrastructure. At the end of the day, I think there’s enough interest, enough goodwill that we can get it done.”