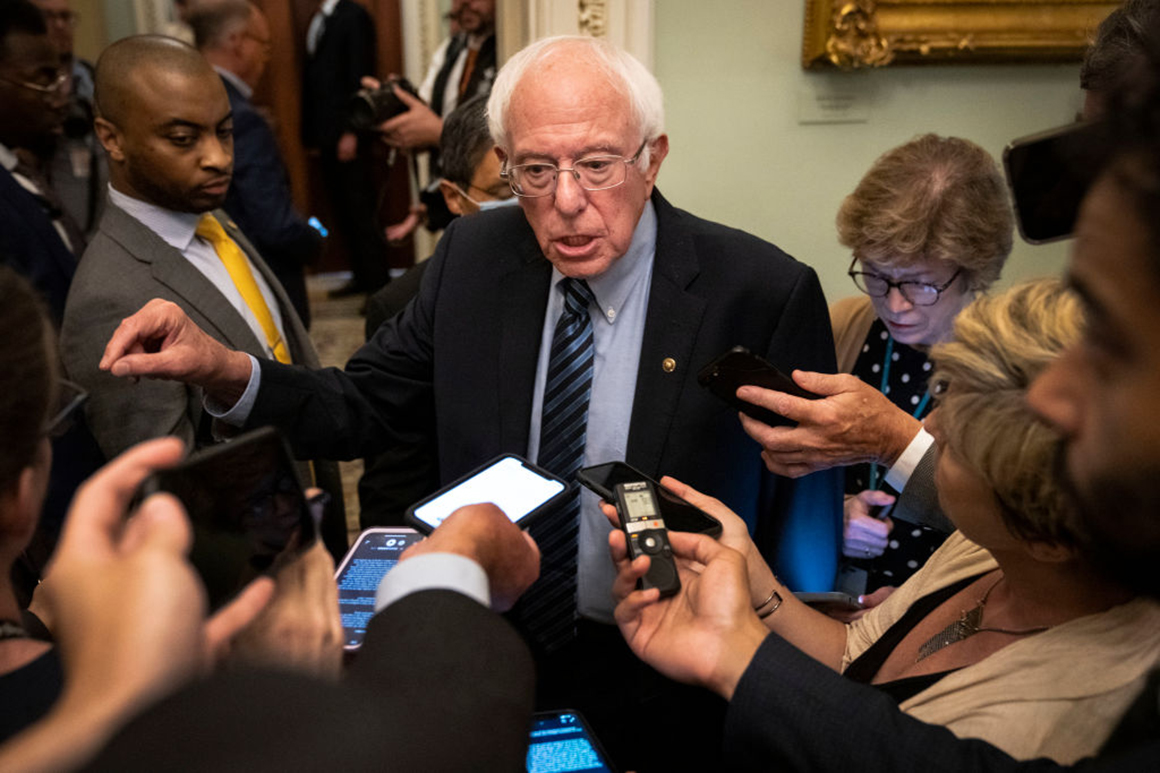 Senate Democrats’ $3.5 trillion spending package will unleash a gusher of hundreds of billions of dollars for progressive priorities, from climate programs to an expansion of Medicare to promised green cards for some undocumented immigrants, according to new details released on Wednesday.

Majority Leader Chuck Schumer, Budget Chair Bernie Sanders (I-Vt.) and Sen. Mark Warner (D-Va.), a moderate on the budget panel, briefed the rest of the Democratic caucus during lunch with President Joe Biden in the Capitol on Wednesday. They discussed some of the biggest components of the planned spending bill that Democrats aim to pass without Republican support using the budget process. That filibuster-proof process starts with a budget resolution, which Senate Democrats have agreed to set at a ceiling of $3.5 trillion.

And while that resolution’s text is still forthcoming, once it arrives it will have few specifics of how Democrats will turn Biden’s priorities into legislation. That makes the policy highlights unveiled Wednesday, as vague as they are, a meaningful spotlight on the scope of the party’s spending ambitions, which would be financed by a shaky combination of tax reform, health savings like lowering prescription drug costs, and the assumption of long-term economic growth.

“Let me be clear — this is a huge bill. This is a complicated bill. This is a transformative bill,” Sanders told reporters after lunch. “In some cases, it doesn’t provide all the funding that I would like right now.”

But with 50 Democrats in the upper chamber and no votes to lose, “compromises have to be made,” Sanders said.

The proposal would expand Medicare to cover dental, vision and hearing services for seniors. It would also fund health care for about 2 million people living in red states that have refused to expand Medicaid. Both provisions were major priorities for liberals, who had originally pushed for trillions of dollars more in a total package.

As promised, the plan will include key commitments from Biden’s “families” and “jobs” plans, including universal prekindergarten for 3- and 4-year-olds, child care subsidies and an increase in the maximum Pell Grant to defray college costs for lower-income students. Democratic leaders also intend to fulfill the president’s pledge to provide more nutrition assistance, paid family and medical leave, and affordable housing.

Democrats plan to use the package to extend the popular increase in the Child Tax Credit, which Congress boosted in March, to a maximum of $3,600 a year for children under 6 years old and $3,000 for older kids. The plan would also continue the current increase for the Earned Income Tax Credit and the tax break for child care costs.

Many Democrats have called for a permanent extension of the Child Tax Credit, which the IRS will start sending out in monthly payments on Thursday. But Senate Democrats aren’t yet specifying the length of the extension they want to provide, stressing that it depends on the cost of the bill and additional input from lawmakers.

“There isn’t a big area of our priorities that was left out,” she said. Still, progressives will be pushing for bigger investments in child and elder care.

“You can be assured, we are pushing for as much as we can possibly get,” Jayapal said.

The inclusion of immigration policy in Democrats’ still-unwritten party-line spending bill is another huge demand for both progressives and members of the Congressional Hispanic Caucus. Both groups were relieved to see their issue included in the budget highlights, though they received few details. It’s also unclear if immigration reform will withstand the scrutiny of the Senate parliamentarian, the official who decides which provisions pass muster with the byzantine rules guiding the budget reconciliation process that governs the bill’s fate.

Progressives and Hispanic Caucus members have pushed for a pathway to citizenship for several key undocumented groups, including so-called Dreamers who were brought to the U.S. as children and “essential workers” during the pandemic, including farmworkers. But a senior Democratic aide confirmed only that the budget would include legal permanent residence for immigrants, without providing additional details — which may not be known for weeks.

The early approval that the budget blueprint won from the left wing of the party didn’t extend across the entire House Democratic caucus. Several moderates privately balked at the overall price tag, which they feared would require hefty tax hikes to pay for the package and fuel GOP attacks.

To help pay for the plan, Senate Democrats plan to beef up tax enforcement and raise corporate and international taxes. They are also seeking to hike rates on “high-income” individuals, but have yet to agree on exactly what income brackets would be hit and how much more those earners would pay.

Three kinds of tax hikes are off that table, however: increases on families making less than $400,000 a year, small businesses and family farms — a sign that Democrats are leery of attacks casting them as “tax-and-spend” liberals.

On climate, Democrats plan to include a clean energy standard that would deliver 80 percent clean electricity by 2030. How to structure that standard in order to survive the arcane reconciliation rules remains unclear, although Democrats and environmental advocates have brainstormed a number of possible approaches.

The budget resolution would also spell out funding for clean energy and electric vehicles incentives, a civilian climate corps, a clean energy accelerator and programs to boost weatherization and electrification of buildings. Democrats are pledging to deliver on Biden’s promise to curb greenhouse gas emissions by 50 percent across the U.S. economy by 2030.

Democrats are also calling for “methane reduction” and “polluter import fees,” though it was not immediately clear what those policies would entail.

Some of the climate provisions are already giving Sen. Joe Manchin (D-W.Va.) heartburn, however. After lunch with Biden, Manchin, a centrist whose vote will be critical to the budget’s success, said he’s concerned about fossil fuels getting short shrift in the final bill.

“I want to see more of the details,” he said.