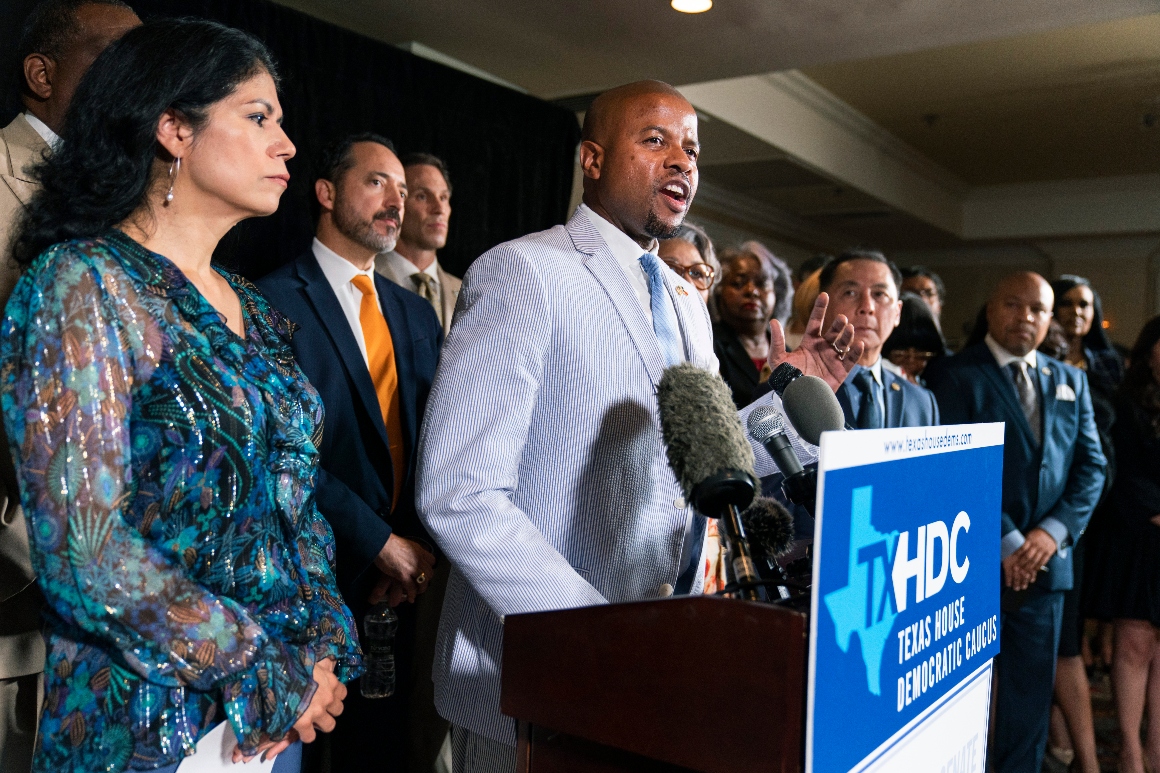 Texas Democrats’ drive to focus Washington on voting rights has been pushed off course by a Covid outbreak and a crush of other activity in Congress that’s now soaking up attention during their second week in the capital.

Six Texas state representatives tested positive for coronavirus during their trip to D.C., the delegation has disclosed, as did an aide to House Speaker Nancy Pelosi who was working with the delegation.

The flood of events and meetings that dominated last week — including highly publicized sit-downs with Vice President Kamala Harris and other senior Democrats — has slowed as the Texans deal with the Covid infections. Negotiations on infrastructure are also occupying the attention of key members of Congress this week, as they race to make progress on a key priority before the August recess.

Some meetings have continued: Members met with House Majority Whip Jim Clyburn on Tuesday — but it was held over Zoom.

“We were planning on having meetings on the Hill on the House side this week,” said state Rep. James Talarico, who added that meetings are being rescheduled for later.

All of the coronavirus cases in the Texas delegation, which includes more than 50 lawmakers who fled the state to deny Republicans there a quorum to pass a new elections bill, are among fully vaccinated people — what are known as “breakthrough” cases. Medical experts say that infections among fully vaccinated people are rare and are usually mild, and people who have gotten vaccinated are much less likely to spread the virus to others. Texas lawmakers say those who have tested positive are mostly asymptomatic or have mild symptoms.

But the diagnoses have scrambled the delegation’s plans and behavior — and invited more criticism from Republicans, who have said the quorum break won’t win Democrats any leverage over their elections legislation. Many of the Democrats were maskless on their charter flights to Washington, and face coverings were rare among members in meetings and in their hotel.

Since the outbreak, that has changed. Masks are now much more common among the Texans — attendees at a Tuesday press conference at their hotel were encouraged to wear masks — and meetings now have virtual options for members of the delegation. Texas lawmakers say they’re now being tested every morning, with those who test positive quarantining in their rooms for 10 days.

Current CDC guidelines call for masks on mass transportation, like airplanes, but they say masks are only needed for fully vaccinated individuals where required by law or guidance from a local government or business.

In addition to the meeting with Clyburn, members participated in a conference on Tuesday with Mi Familia Vota, some in person and some over Zoom.

Texas state Rep. Jasmine Crockett said she got the impression from the Clyburn meeting that the Texas Democrats’ arrival in D.C. had “tipped the scale” on voting rights and injected new energy into the issue. She said he encouraged them to keep taking meetings and working with federal lawmakers to think “outside the box” on voting rights action, as Democrats’ signature elections legislation remains stalled in the Senate.

In that sense, Crockett said she thinks the Democrats’ D.C. trip has been a qualified success so far — but the Covid diagnoses do represent a hurdle.

They also continue to face criticism from Republicans back in Texas. GOP Gov. Greg Abbott, who is up for reelection in 2022 and has drawn several GOP primary challengers, aired a spot criticizing the delegation during a Monday MSNBC town hall with some of the lawmakers.

“Instead of addressing border security, retired teachers, & foster children Texas Democrats decided to take a road trip,” read the text of the ad, which aired in Austin, Dallas and Houston.

“What the Democrats have done is a disaster of a trip up to Washington, D.C., that has accomplished absolutely nothing,” Abbott said during a Tuesday Fox News interview.

They’re hoping that once those negotiations wrap up, Washington’s attention will return to voting rights.

“That has been communicated to us: That they want to get past infrastructure before they get to voting rights,” Talarico said. “Voting rights is kind of now breathing on the neck of infrastructure, and ready to take its place at the front of the national conversation. We consider that a major victory. And the challenge for us is, how do we hold them to it?”

Members of the delegation are also still angling for a meeting with President Joe Biden, but they have not secured one yet. Crockett says that some members are trying to meet with former President Barack Obama as well.

“I recently spoke to Congressman Al Green, who is the chair of the Texas [Democratic] House delegation, and he is still eager for us to meet with President Biden,” state Rep. Ron Reynolds said. “They sent out a strong letter asking for that meeting. And also the Congressional Black Caucus is doing the same thing.”

Chris Turner, the state House Democratic caucus chair, also said at a press conference the delegation would be open to a virtual meeting with Biden as well.

“In terms of a meeting, there has not been a meeting planned and there hasn’t been a change to that,” White House press secretary Jen Psaki said when asked if the positive Covid cases among the Texans affected any plans. “So I wouldn’t say it has an impact on that.”

Maeve Sheehey contributed to this report.