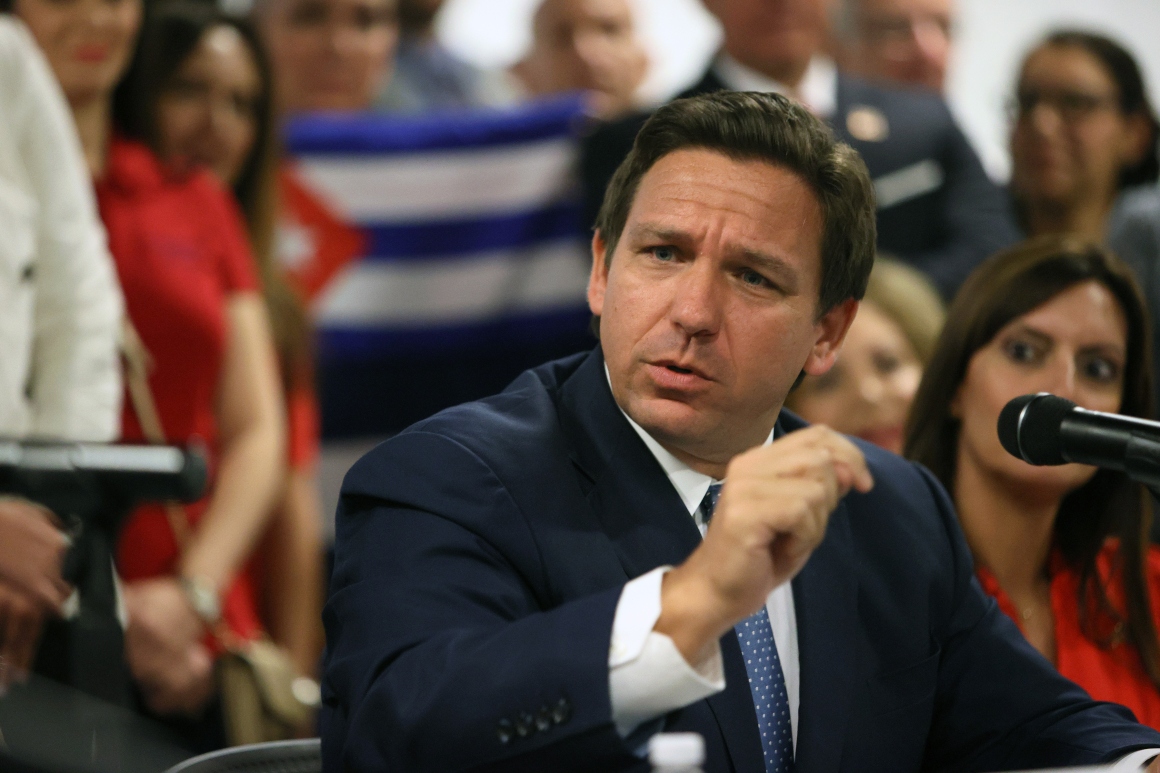 TALLAHASSEE — Florida Gov. Ron DeSantis’ brief moment of unity with Democrats is over.

The Republican governor set aside his attacks on Democrats amid the crisis in Surfside, where more than 90 people were killed after a condominium collapse. For more than three weeks, DeSantis stood side-by-side with Miami’s Democratic mayor and other elected officials, offering assistance and support as emergency workers searched for survivors. He publicly thanked President Joe Biden for federal help during the catastrophe and even skipped a rally in Sarasota with former President Donald Trump.

That’s all over now.

DeSantis this week accused the Biden administration of “cowardice” over its handling of Cuba, saying it provided a “weak” response to the wave of protests that have spread across the island nation. His campaign team unveiled new merchandise, including T-shirts and hats that read “Don’t Fauci My Florida” as the state’s Covid rates have begun to rise.

DeSantis then appeared Wednesday morning at a state board of education meeting, where he assailed teaching critical race theory in schools and pushed to ensure educators instruct students about the “evils of communism.” Critical race theory is a legal concept and practice that examines how race has been woven into policies and laws that continue to affect society.

Many speculated that conservatives — including Trump — would berate DeSantis for working with Democrats and especially for not attending Trump’s rally while the governor was helping oversee the Surfside disaster. But DeSantis’ recent rhetoric condemning the Biden administration’s foreign policy, vaccinations and critical race theory drew praise from Republicans across the state and reassured them that DeSantis will remain a partisan warrior and leading contender for the 2024 presidential nomination if he runs.

Christian Ziegler, vice chair of the Republican Party of Florida, said the governor “displayed steady and unifying leadership on the ground at Surfside.” But he said DeSantis’ battle over critical race theory is “one he won’t let up on.”

“His ability to successfully juggle multiple important policy fronts at once is one of the main reasons Floridians love our governor,” he said.

Christina Pushaw, a spokesperson for the governor, downplayed the governor’s change in tone.

“It’s possible to engage in bipartisan cooperation on specific things, with people that you might disagree with on most other issues,” Pushaw said in an email.

DeSantis, formerly a congressman, won the governorship in no small part because of an early endorsement from Trump, and as he prepares for his reelection bid, he’s embracing Trump-style politics even more tightly, especially as Florida leans more red. His bipartisanship with Democrats during the summer, however short, earned him accolades even from his opponents. But Democrats, who also held their fire, are returning to publicly rebuking the governor.

“The governor fails to recall who is the real coddler of Communists around the world. Trump consistently shows love for tyrants and serial human rights abusers, from Russia to Turkey and North Korea. Havana knows that reality,” said Rep. Debbie Wasserman Schultz (D-Fla.), who just weeks ago stood next to DeSantis during a press conference at the Surfside site.

“No Republican should undermine that democratizing mission just to score cheap political points,” she told POLITICO.

This isn’t the first time DeSantis refrained from staunchly conservative political fights, but it’s by far one of the shortest.

DeSantis’s pathway to governor in 2018 came amid his frequent appearances on Fox News, where he became one of Trump’s biggest defenders. But after DeSantis nearly lost his 2018 election to Democrat Andrew Gillum, he made attempts to shift to the middle by taken stances on medical marijuana, education and the environment that were a departure from his Republican predecessor, former Florida Gov. Rick Scott.

But the Covid-19 pandemic saw DeSantis swing back hard to the right as he railed against mask mandates, health care bureaucrats and the media. Republicans across the country celebrated his legislative agenda, which included a push for an “anti-riot” bill in response to last year’s racial justice protests and a measure reigning in “Big Tech” after Trump was deplatformed.

State Sen. Janet Cruz, a Hispanic Democrat from Tampa whose grandfather once lived in Cuba, called DeSantis’s criticism of Biden’s Cuba response a “little bit ridiculous.” She wants Biden to take action because it will help Democrats push back against the GOP message that they are soft on communism and socialism, but she added that it’s naïve to imply the situation can be easily fixed “today or tomorrow.”

“We come together for a disaster at Surfside but we don’t miss a chance to poke someone in the eye when it’s politically advantageous,” Cruz said.