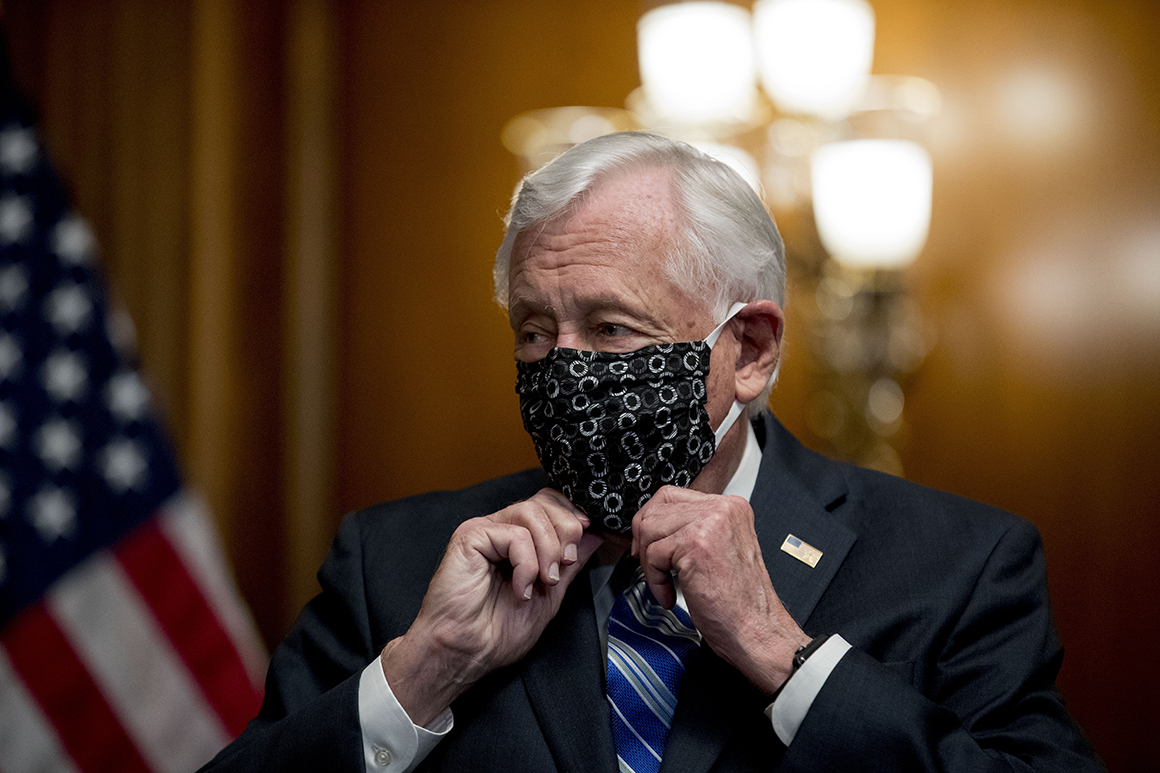 Democratic Rep. Jared Huffman was headed to the House floor Wednesday when he saw a vocal GOP vaccine resistor — unmasked — in the elevator.

Huffman decided to take the stairs, but not before issuing a sharp warning to Rep. Byron Donalds, telling the Florida Republican he shouldn’t be crowding into an elevator with other members. The two crossed paths again outside the chamber and Huffman had more to say, calling the GOP freshman “selfish.”

“Here’s a guy who comes from a state that is ground zero for the Delta variant, goes on national TV to tell the world that he’s unvaccinated,” marveled Huffman, a California Democrat, as he recalled the incident.

Donalds, who confirmed the encounter, said afterwards: “People need to mind their own business.”

Just when it seemed like tensions couldn’t get worse in the political tinderbox that is the House, a mask mandate made an unexpected return thanks to Covid’s Delta variant. Now, long-simmering frustrations about the pandemic — and grievances stemming from the Jan. 6 pro-Trump riot — are again spilling into public view, with dozens of Republicans flouting the new public health guidance amid a surge of cases in the Capitol.

This time it’s more than hallway confrontations among the rank and file. The House’s top two party leaders engaged in a public round of name-calling over Covid precautions, with Speaker Nancy Pelosi calling House Minority Leader Kevin McCarthy a “moron” for his opposition to the mask requirement, as captured by NBC. McCarthy sarcastically called the speaker “brilliant” in retort.

McCarthy later compared Pelosi’s mask mandate to a hair salon visit she made last fall when her hometown was curtailing indoor services during the pandemic, an episode the speaker later described as “a set-up” by critics. He also claimed the speaker was unmasked during a meeting with the Iraqi prime minister; a Democratic aide responded that party members, all fully vaccinated, removed their masks only to eat and speak at that meeting.

“It’s pretty bad,” House Majority Leader Steny Hoyer (D-Md.) said in an arguable understatement of the chamber’s mood. He then swiped at Republicans.

“Most of the times I’ve worked here in the House we’ve had leadership, whether we were in the majority or the minority, that was somewhat intent on keeping things even,” Hoyer added, aiming faint but unmistakable criticism at McCarthy. “That’s enough said.”

While the Senate was striking a massive bipartisan deal on infrastructure on Wednesday, the House was taking a slew of protest votes forced by an incensed group of Republicans — a stunning juxtaposition that reveals just how starkly different the dynamic is across the Capitol.

It’s not just the renewed anxiety over coronavirus in the Capitol, where cases are again spiking weeks after the campus began enjoying a return to normalcy. Any remaining interest in bipartisan cooperation has plummeted after the Democratic-led investigation into Jan. 6 kicked off with McCarthy yanking his members from the panel upon Pelosi’s rejection of two of his fiercest Trump defenders.

The dust-up between Huffman and Donalds is one in a series of clashes between the parties in recent days, with lawmakers on both sides counting down the hours until August recess amid the hottest days of the D.C. summer. One Democrat even compared Republican complaints about masks to babies crying about wearing diapers.

And on Tuesday, Rep. Jamie Raskin (D-Md.) used a procedural hearing over a spending bill to confront GOP Rep. Andrew Clyde (R-Ga.) about his previous remarks comparing rioters on Jan. 6 to a “normal tourist visit.”

“He refuses to say whether or not he heard the Capitol officers who risked their lives and have experienced traumatic medical injuries,” Raskin said in the hearing. “That’s his prerogative.”

The clash over whether Clyde watched the first hearing of the select panel investigating Jan. 6 came hours after four law enforcement officers testified about the violence they faced when responding to Trump supporters attacking the Capitol that day.

The most fervent displays of the tensions in the House, however, have been related to the mask mandate. Lawmakers and staff of both parties are dealing with pandemic whiplash just two months after the Capitol doctor nixed the masking requirement in May.

Rep. Chip Roy (R-Texas), a conservative who’s honed a reputation for procedural mischief in the House, helped lead a day-long series of GOP protest votes over the mandate.

“I am struggling to find any single scintilla of something I can agree with my colleagues on the other side of the aisle about,” Roy said in an interview.

Roy was among roughly two dozen House Republicans who disregarded the new guidance and opted not to wear a mask on the floor — risking a $500 fine.

Donalds, after he was confronted by Huffman about his choice not to wear his mask, said it should be up to individual members to decide, especially for those like himself who have already had Covid.

“What’s going to cause issues is when you have members who, frankly, want to be sanctimonious and tell another member what they need to do with their body,” Donalds said. “Last time I checked, the members on the other side of the aisle don’t like that.”

A band of hardline Republicans have long been skeptical of the Capitol physician’s health guidance, with several — like Roy and Rep. Marjorie Taylor Greene (R-Ga.) – refusing masks and vaccines even before the summertime lull in cases. Still, the majority of House Republicans complied with the earlier health guidance, and did receive their vaccines when they were able.

This week, however, the House GOP’s patience has begun to run thin, arguing that Biden’s course-reversal on masks is not based on the real risks to vaccinated people. Some also argued reinstating masks would send the wrong message and fuel vaccine hesitancy, while noting that the new guidance applies only to the House, not the Senate. (Notably, the Senate GOP stepped up its own pro-vaccine messaging this week.)

“If she’s so brilliant, can she tell me where the science in the building changed between the House and the Senate?” McCarthy told reporters Wednesday, though he did comply with the guidance and wear his mask on the floor. “If she knows so much science, explain to me where the science has changed in the Rotunda?”

McCarthy and other Republicans are slated to meet with the Office of the Attending Physician Wednesday to get answers on the new mask guidance, according to a source familiar with the meeting.

Some Republicans have aggressively dismissed the guidance: Colorado Rep. Lauren Boebert was seen tossing a mask back to a floor staffer who had tried to hand her one as she walked on the floor unmasked. Boebert later called it a “face muzzle” and said the new mandate was “bullshit.”

Still, not all Republicans were on board with Roy’s ploys to protest the mask order. Rep. Carlos Gimenez (R-Fla.) called it an “inconvenience” that won’t go anywhere. Most of the GOP frustration was geared toward Democrats — and the two Republicans who serve on the Jan. 6 committee at the appointment of Pelosi: Reps. Liz Cheney of Wyoming and Adam Kinzinger of Illinois.

For many lawmakers, there’s at least a temporary solution looming on the horizon: August recess.

“Everybody wants to go home,” quipped Rep. Scott Peters (D-Calif.). “We’re all so tired of each other.”