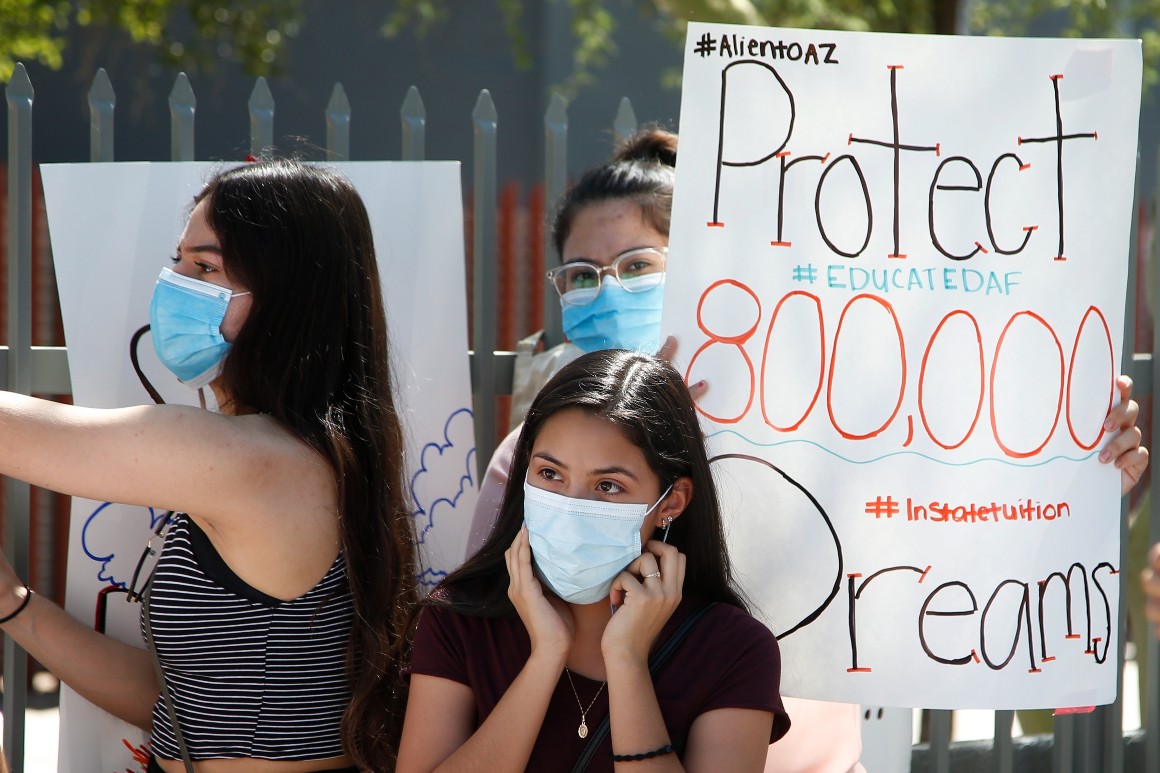 A federal judge in Texas on Friday blocked the Biden administration from approving new applications for the Obama-era Deferred Action for Childhood Arrivals program — but current DACA recipients will remain unaffected for now.

In a 77-page ruling, U.S. District Court Judge Andrew Hanen found that DACA is unlawful and that the Department of Homeland Security can no longer approve new applicants into the program, which has granted work permits and protection from deportation to more than 600,000 young immigrants brought to the U.S. as children. He also ruled that DHS could continue to process DACA renewals for now as the issue continues to move through the courts.

The court order does not “require DHS or the Department of Justice to take any immigration, deportation, or criminal action against any DACA recipient, applicant, or any other individual that it would not otherwise take,” Hanen wrote in the ruling.

It is the latest blow to the program, which has been caught in legal limbo since former President Barack Obama introduced it in 2012.

Immigrant advocates, attorneys and DACA recipients had been bracing for Hanen to rule against DACA given the Trump administration’s handling of the case and the judge’s track record on immigration. They had been waiting on a ruling since a hearing took place in late December.

Advocates, for months, have said a ruling against DACA could force Congress to move more quickly on securing a pathway to citizenship for Dreamers. If DACA is ultimately overturned for current recipients, they will be stripped of their protection from deportation and work permits.

Democrats are planning to include immigration measures — such as a pathway to citizenship for Dreamers, recipients of Temporary Protected Status and essential workers, like farmworkers — in the forthcoming $3.5 trillion spending bill. Still, it is unclear if the measures will survive the Senate’s budget rules that would allow it to be part of the final package.

On Friday afternoon, immigrant advocacy groups, Democrats, DACA recipients and backers of the program were quick to put out statements slamming the ruling and calling on Congress to ensure a pathway to citizenship is in the reconciliation package.

“Not a surprise, just a painful reminder that we need to stop relying on temporary immigration fixes,” Sen. Bob Menendez (D-N.J.), one of the key figures pushing for immigration reform on Capitol Hill, posted on Twitter. “Congress must seize the moment and any and all opportunities to finally provide a pathway to legalization for millions of undocumented immigrants.”

Despite the ruling, DACA remains popular, with widespread support among both Republicans and Democrats across the country.

“We don’t need to hear Republican talking points — the solution is clear, and all leaders should have the will and commitment to leave politics aside and advance this long-held promise, carrying the weight of public support and the urgency of the moment,” said Sergio Gonzales, executive director of the Immigration Hub.

The Biden administration is expected to appeal Hanen’s decision to the New Orleans-based 5th Circuit Court of Appeals.

In 2015, Hanen — an appointee of President George W. Bush— blocked Obama’s move to expand the DACA program to cover millions more immigrants by increasing eligibility and creating a similar quasi-legal status for family members of U.S. citizens and legal residents. However, the red states that brought suit over the DACA expansion did not mount a serious challenge to the original program until last year.

Texas and eight other states, in their lawsuit, asked the court to end DACA, arguing that it was unconstitutional and has forced states to bear extra costs from providing DACA recipients with services like education. But DACA supporters have long pointed to research documenting the program’s benefits for both young immigrants and the country. The Center for American Progress, for example, estimates that ending DACA would mean a loss of billions of dollars in GDP for the states suing to overturn it.

In the decision Friday, Hanen adopted one of the same conclusions he came to in the first decision: that the programs should have been subjected to formal notice-and-comment under the Administrative Procedure Act. In the new ruling, the judge also held that the substance of the original DACA program was illegal because it exceeded powers Congress granted to executive branch agencies.

The Obama administration and supporters of the programs argued that they were similar to earlier actions by a series of administrations to temporarily accommodate certain groups of immigrants because of unrest abroad or for other reasons. But Hanen said those efforts were different because they provided relief to immigrants from specific countries or amounted to stopgap measures adopted in anticipation of congressional action.

“Given the nine-year history of failed legislation in Congress, it is an inescapable conclusion that DACA is not interstitial to any congressional action,” Hanen wrote. “Although Congress may someday enact such a DREAM Act, until it does, its continued failure to pass bills coextensive with the DACA population evinces a rejection of this policy.”

The ruling Friday is also in tension with a decision last December from a federal judge in Brooklyn, Nicholas Garaufis, who ordered the government to begin processing new applications for DACA again and to resume granting permissions for DACA applicants to take trips out of the country without losing their status. In the new decision, Hanen insisted that while he was prohibiting new grants of DACA, he was not interfering with the other judge’s order for the Department of Homeland Security to accept such applications.