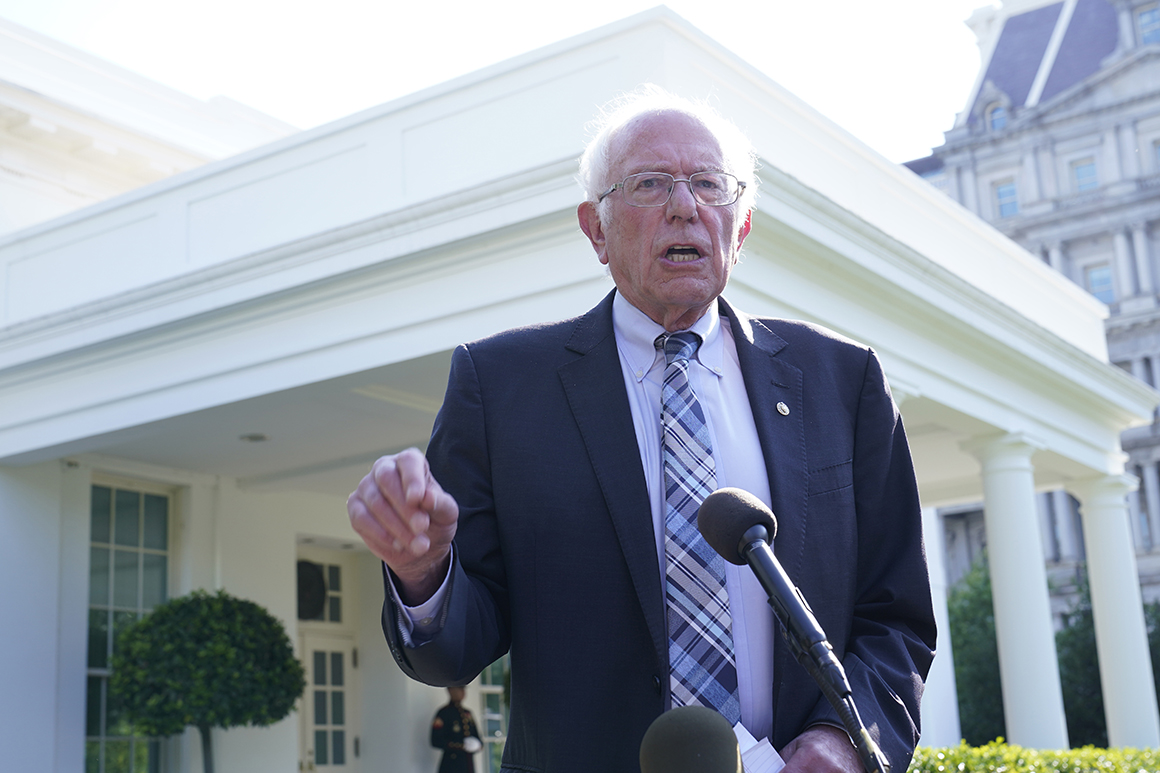 Top Democrats are finalizing the bones of a multitrillion-dollar partisan spending plan designed to ride alongside a bipartisan infrastructure deal — and attempting to squeeze as many priorities as they can into their GOP-free shopping cart.

Masterminded by Senate Budget Chair Bernie Sanders (I-Vt.), the public blueprint is expected as early as this week, setting an ambitious spending ceiling for passing the dream policies that won’t make it in any bipartisan infrastructure package. Because Democrats only get one more crack this year at passing a bill that doesn’t require any support from Senate Republicans, every lawmaker in the majority party is lobbying to push their priorities into the final package passed using the filibuster protections of so-called budget reconciliation.

They’ll continue to scuffle over its exact contents in the coming weeks. Meanwhile, pieces of the plan will simultaneously die at the hands of the Senate parliamentarian, who is tasked with deciding what’s allowed under the advantageous — but limiting — reconciliation process.

“We’re gonna get yeses and nos. We know that,” said Senate Banking Chair Sherrod Brown (D-Ohio). “The most important thing is we go big. The public wants us to go big. We make a difference for a generation on some of these issues.”

The core of the package is expected to deliver on the parts of Biden’s $1.8 trillion “families” plan and $2.3 trillion “jobs” proposal that don’t get included in the separate bipartisan deal, including the president’s pitch for universal prekindergarten, two years of free community college, extending the expanded child tax credit and creating a paid family and medical leave program. But a bevy of other liberal policy ambitions also stand a chance.

Here’s what else is on the menu:

Free school meals for all — Progressives want the package to support free meals in every public school, including breakfast, lunch, dinner and snacks for all kids, no matter their family income. The pandemic effectively acted as a trial run for the policy, after the Agriculture Department eased requirements for schools to provide free meals to any student.

Biden has already extended that flexibility through June of next year, the end of the upcoming school year. But lawmakers including Sanders and Rep. Ilhan Omar (D-Minn.) are pushing to make it permanent. Hundreds of advocacy groups are on board, including the School Nutrition Association and the National Education Association, the largest teachers union in the country.

Republicans say the price tag is too steep.

Also likely to be included: federally subsidized Build America Bonds, which lower the cost of state and local borrowing for infrastructure projects; plus an expansion of the New Markets Tax Credit, which encourages investments in low-income areas; and tax subsidies for affordable housing.

Cheaper prescriptions — Progressives are rooting for policies that lower prescription drug prices. But congressional Democrats are as divided as ever on how to make it happen.

Top House Democrats have backed a plan that would empower Medicare to negotiate prices with pharmaceutical companies, in order to pass on savings to consumers.

Some moderate Democrats say the move would hamper work to create innovative drugs, though. And the effort faces long odds in the Senate, where Finance Chair Ron Wyden (D-Ore.) wants to instead move forward with a bipartisan deal on drug pricing he previously struck with Iowa Republican Chuck Grassley.

Immigration reform — Democrats want to include a pathway to citizenship for recipients of the Deferred Action for Childhood Arrivals program, also known as Dreamers, as well as immigrants with temporary protected status and those who are essential employees like farm workers.

Top Democrats like Senate Majority Leader Chuck Schumer and House Speaker Nancy Pelosi have expressed a desire to include immigration changes in the package, and Biden has also signaled he’s open to it. Lawmakers like House Budget Chair John Yarmuth (D-Ky.) are worried, however, that the policies can’t be included in a reconciliation package, due to the special budget rules that guide the filibuster-proof process.

The push comes as the Biden administration has failed to rally enough support, even among Democrats, for the president’s sweeping plan to revamp the U.S. immigration system for the first time in more than three decades.

Republicans on the committee argue that the boost should be part of Congress’ next farm bill, due in 2023, instead of funneled through the partisan package Democrats are crafting.

Money for elections — Some Democrats are eyeing more election spending in the bill following the defeat of a massive elections and ethics reform proposal. Some in the party view a negotiation with Republicans on the issue as implausible given the two parties’ different approaches. Following the failure of the election bill last month, Schumer vowed that Democrats would explore “every last one of our options” and pledged that the issue would come up for debate again in the Senate.

Closing the ‘digital divide’ — Ideas for bringing internet service to more corners of the country could potentially make it into the final bill. Democrats want to free local governments to own and operate their own internet networks. More than a third of states currently outlaw the practice, bowing to lobbying from incumbent internet service providers who say the private sector should provide those services.

Democrats have agreed to stick the proposed $65 billion in broadband funding in the bipartisan framework with Republicans. But the GOP broadly opposes some Democratic goals on the topic, like overriding the state broadband restrictions.

Hill leaders to watch include Sen. Cory Booker (D-N.J.) and Rep. Anna Eshoo (D-Calif.), who have written bills to that end, along with supporters like the National League of Cities, the U.S. Conference of Mayors, Consumer Reports and Google.

Union contracts — Biden and congressional Democrats have pushed for any infrastructure investment to come with requirements that contractors work with unions and pay “prevailing wages,” which the Labor Department sets as the going rate for certain jobs in different areas of the country.

Some key lawmakers, namely Sen. Joe Manchin (D-W.Va), support those policies. Business groups will lobby hard against them, though, likely booting the requirements from any bipartisan bill and prompting Democrats to add them to their own plan.

The wage mandate may survive under the budget rules since it could affect the inflow of tax revenue, and the federal government would likely have to pay more on projects that require prevailing wages. While the higher wages and benefits that typically come along with a union contract could also drive up the cost of government-funded projects, it’s unclear how the parliamentarian would calculate that toll. 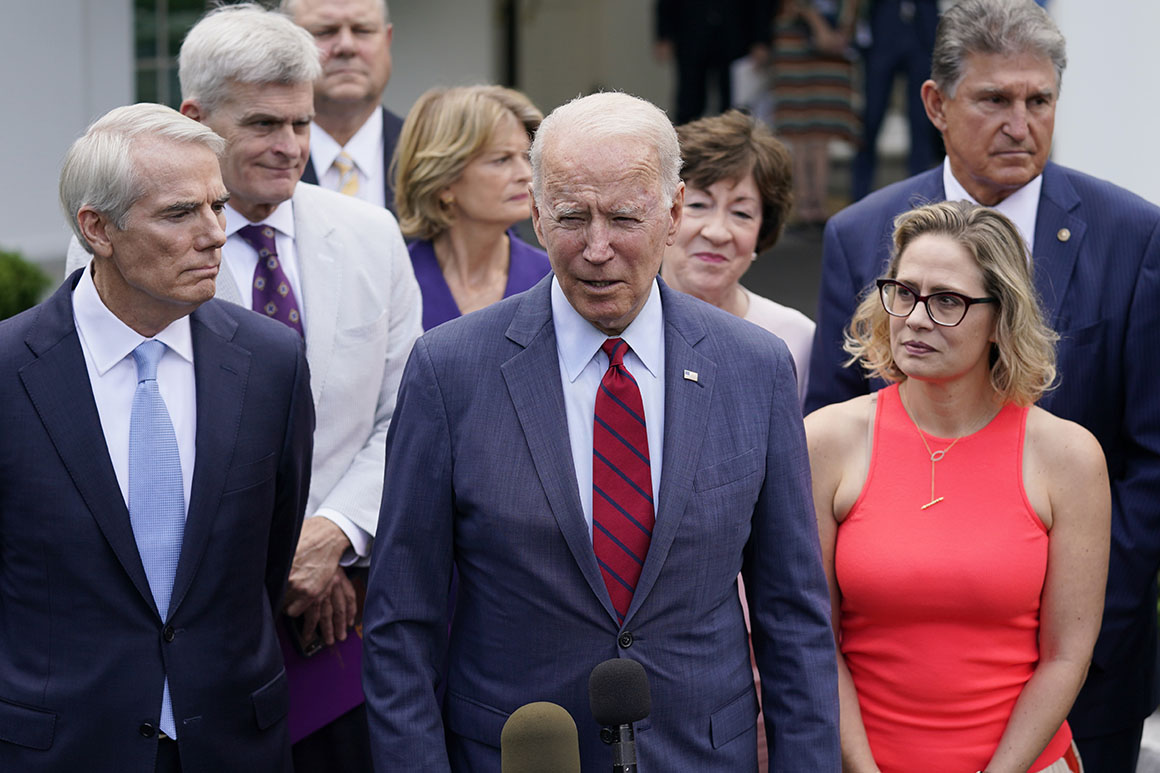 Medicaid ‘gap’ fix — A dozen states still refuse to expand Medicaid, and Democrats want to use their partisan plan to circumvent that by delivering health insurance coverage to millions of Americans in those holdout states.

Sen. Raphael Warnock (D-Ga.), who helped deliver Democrats their majority and is up for reelection next year, is leading the effort in the Senate. The influential Black, Hispanic and Asian Pacific caucuses are pushing for the policy in the House.

Democratic leadership supports the idea, which would plug the biggest remaining hole in Obamacare and give red-state Democrats a policy win to tout on the campaign trail. But since the policy is expected to be pricey, it’s in competition with other health care funding priorities.

Clean energy perks — Manchin, chair of the energy committee and a crucial vote for the Democratic agenda, has floated an $8 billion tax credit that would attract clean energy manufacturing and recycling companies to areas with significant unemployment. The credit, dubbed 48C after its place in the tax code, would give $4 billion to areas where a coal mine or power plant has recently shuttered. The potential perk enjoys bipartisan support from Stabenow and Steve Daines (R-Mont.).

Another key Manchin priority is preserving the nation’s fleet of nuclear power plants. The West Virginia Democrat included a nuclear credit program worth $1.2 billion a year in a recent bill draft. He also wants to extend fees that feed an abandoned mine cleanup fund, as well as protect health and pension benefits for miners.

Sidelined transportation projects — If lawmakers mesh together the House’s transportation bill with the bipartisan infrastructure framework Biden has struck with Republicans, some of the chamber’s climate provisions could end up shuffled into Democrats’ partisan package since Republicans may not be eager to support funding for things like electric vehicle charging, subways and trains.

Worker protections — A top priority for organized labor is including a bill that would make it easier for workers to form unions and extend collective bargaining rights to independent contractors.

Democrats also want to pass comprehensive paid family leave policies, a priority for Biden and a goal supporters say is especially pressing given the dropoff in women in the workforce during the pandemic. But even if Congress boosts funding for paid leave policies, employer requirements are not expected to fly under the budget rules.

Medicare expansion — Progressive Democrats are pushing for two major changes to Medicare as part of the partisan plan: Lowering the eligibility age and adding coverage for dental, vision and hearing care.

Sanders is leading the charge for both policies in the Senate, and Schumer has endorsed the idea of simply expanding benefits. The dynamics are similar in the House, where progressives are pushing for both goals while leadership is mainly on board with bolstering coverage for Americans already eligible for Medicare.

The policies would help Democrats deliver on key election promises to lower out-of-pocket health costs. Boosting benefits for Medicare recipients would also likely be an electoral boon, given higher voter turnout rates among older Americans, making them crucial to the party’s hopes of holding on to the majority in both chambers.