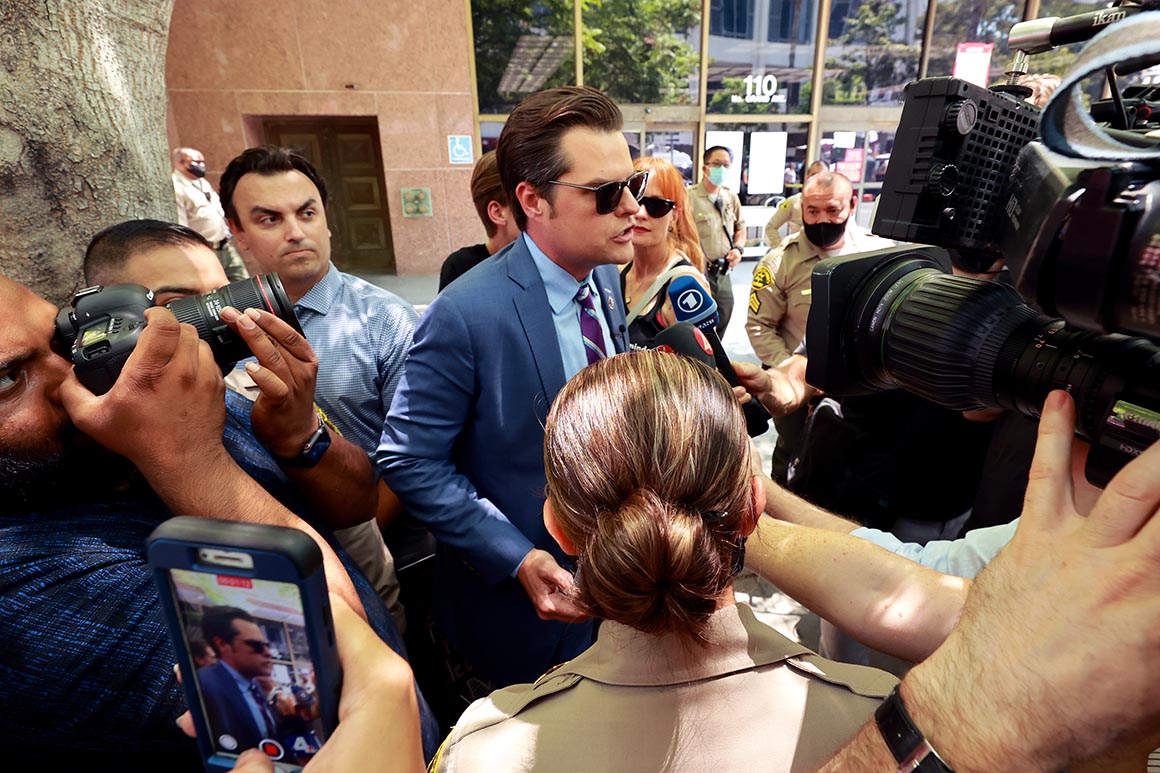 MIAMI — A sugar daddy website linked to the sex-trafficking investigation of Matt Gaetz publicly weighed in on the scandal, saying the lawmaker has never been registered on the site in search of young women.

The unusual move by the web site SeekingArrangement puts some distance between Gaetz and the accusation against him. The site had been caught up in the Gaetz case because it had reportedly been used by the GOP lawmaker and another key player in the case to connect with an underage girl for sex.

SeekingArrangement, which helps “sugar babies” connect online with men, released a statement because of yet another odd twist in the case: The former mistress of golfer Tiger Woods sued the website claiming it wrongfully terminated her contract as the company’s spokesperson. The plaintiff, Rachel Uchitel, said she was fired because SeekingArrangement was in damage control due to the investigation into Gaetz, which is unrelated to her lawsuit.

Uchitel never met or had any interactions with Gaetz. She also had no connection to Gaetz’ former friend and “wingman,” Joel Greenberg, a former Florida county tax collector who had met a 17-year-old on SeekingArrangement and admitted to prosecutors that he had sex with her in 2017.

Greenberg recently pleaded guilty to sex-trafficking the minor, among a host of other charges. In exchange for a lighter sentence, Greenberg is cooperating with federal prosecutors and has alleged that Gaetz also had sex with the minor in 2017. Gaetz has denied any and all wrongdoing and said he never even registered to use SeekingArrangement, a statement the company appeared to support.

“Seeking.com has no knowledge of Mr. Gaetz ever having an account on the website,” the company said in its statement.

“Despite her claims, Ms. Uchitel’s termination was in no way related to the state of affairs within the company, current events or any celebrities and/or politicians,” the statement said. “Her remarks on Representative Gaetz have been entirely fabricated and are unfounded as at no time did Ms. Uchitel have personal knowledge of the website outside of those she may have met personally as a user of the site.”

A company spokesperson would not comment on how it determined Gaetz was not on SeekingArrangement.

The mention of Gaetz in the lawsuit led to his name being splashed in tabloid headlines, starting with TMZ, followed by Page Six and Radar Online. In her lawsuit that SeekingArrangement disputes, Uchitel said that a company representative told her that “the Matt Gaetz scandal was a ‘serious crisis for the company’” and there was a “major crisis over the Matt Gaetz issue.”

A spokesperson for Gaetz, Harlan Hill, said the lawmaker’s name has been boot-strapped to stories about Uchitel’s case for the same reason Greenberg invoked him: It’s clickbait.

“The media’s lies about Rep. Gaetz have fallen like dominoes including the fake ‘SeekingArrangement’ claims,” Hill said in a written statement. “The new ploy for attention seekers seems to be name dropping a famous lawmaker for a few minutes of fame. From Greenberg to Uchitel – the new hotness is having Matt Gaetz in your legal drama to grift some news headlines. Sad!”

But Uchitel’s lawyer, Galen J. Criscione, said Gaetz was only mentioned in the suit because the lawmaker’s scandal was used as a pretext to wrongfully terminate his client.

The investigation into Gaetz has dragged on and produced a slew of lurid headlines about wild sex parties involving multiple women, a sex-fueled trip to the Bahamas and illegal drug use.

Gaetz has responded to the crisis by embarking on a nationwide tour and fundraising and advertising blitz, spending big on public relations, advertising, consultants and lawyers, including one who had defended now-deceased pedophile Jeffrey Epstein.

Some defense lawyers involved in the wide-ranging case, however, speculate that the federal investigation into Gaetz has stalled for a lack of clear evidence and because of the problematic witnesses in the case: Greenberg and his former victim, who is now 21 and makes hardcore pornography.

The Justice Department declined to comment for this story.

That woman, whom POLITICO is not naming, had passed herself off as a 19-year-old when Greenberg first met her in 2017 when he had sex with her, according to his plea agreement. Asked what the company does to ensure minors do not engage in sexual activity through its site, a SeekingArrangement spokesperson said the company would not comment on an ongoing investigation.

Under the federal sex-trafficking law, sex with a minor for money is a crime — even if the minor lied about his or her age. However, the circumstances of the case involving Gaetz is giving prosecutors pause, according to two attorneys representing separate people in the case who spoke on condition of anonymity to describe the evidence they have seen.

The lawyer asked not to be named to protect the identify of his client, who they said could face harassment.

Gaetz’s former girlfriend has been in talks to strike a plea deal with prosecutors who are examining an obstruction of justice charge against Gaetz, but her attorney would not comment on the status of those talks.

People familiar with the case told POLITICO in May that, if an agreement had not been struck by July, it would be a sign that the investigation into the lawmaker was stalled, although prosecutors have at least five years from the last date of the last crime to file charges.