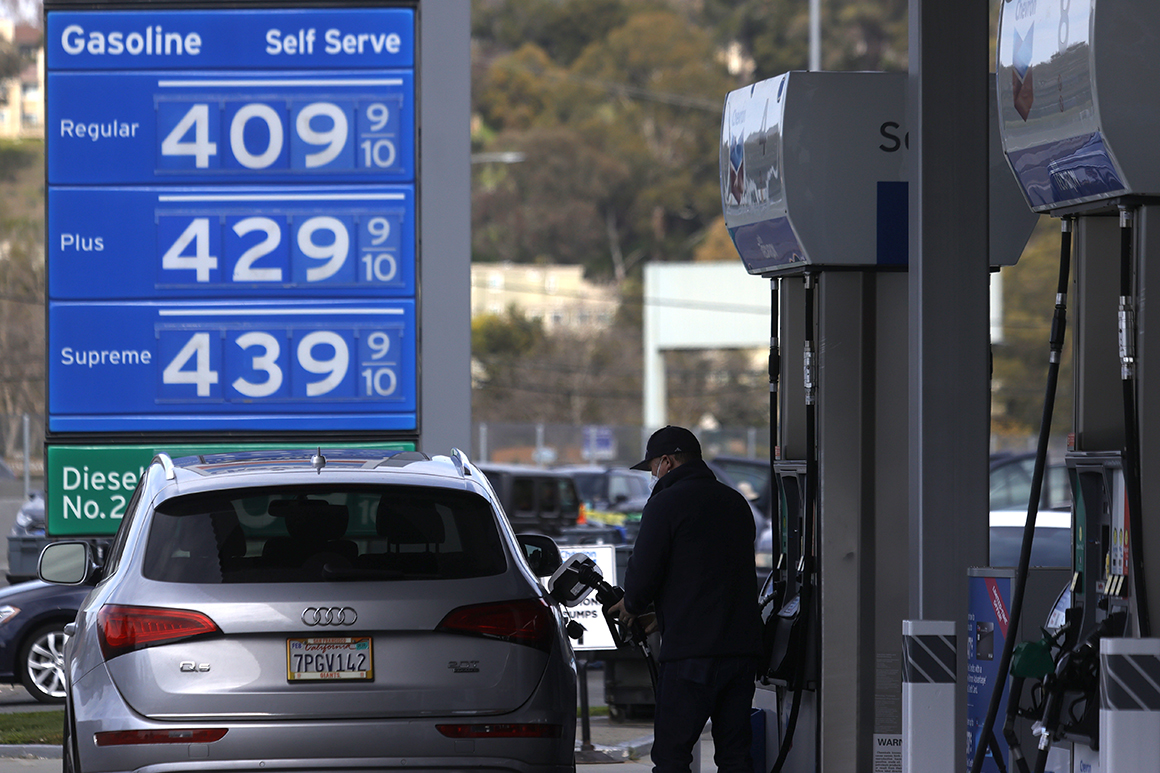 Americans are hitting the road in droves for the long Fourth of July weekend and Republicans are turning to another tried-and-true tradition: blaming the president for high gasoline prices.

Prices at the pump have climbed to a national average of $3.126 per gallon, nearly $1 higher than a year ago when the nation was cooped up at home as the pandemic raged. But AAA is predicting a record 44 million people will take road trips this weekend, and Republicans hope they’ll think of President Joe Biden when they fill up.

GOP operatives and lawmakers are ramping up their focus on gas prices, and rising inflation more broadly, to counter other areas of the Biden economy — such as jobs and wages — that are delivering strong gains for U.S. workers as they emerge from the pandemic. They’re hoping to blunt some of the political upside for Biden by highlighting the most visible product price across the U.S., one that’s long been a source of irritation for American drivers.

“People are paying more at the grocery store, at the gas pump, and when buying everyday goods,” Republican National Committee Chair Ronna McDaniel tweeted Sunday. “Rising prices under Biden are a hidden tax paid by every American!”

“Is it any wonder we’re seeing surging fuel prices and inflation?” Sen. John Barrasso (R-N.D.) wrote in an op-ed Friday, pointing to White House policies that he said would reverse the U.S. oil boom of the past decade.

It’s an old tactic employed by opposition parties to blame sitting presidents when fuel prices rise on their watch — and one that Republicans unsuccessfully tried to wield against Barack Obama during a recovering economy a decade ago. This time, they are pointing to Biden’s ambitious climate change plans, his pause on leases for new oil wells on federal lands, and his cancellation of the permits for the Keystone XL pipeline as the culprits, although none of those steps have had any immediate impact on what motorists pay at the pump. 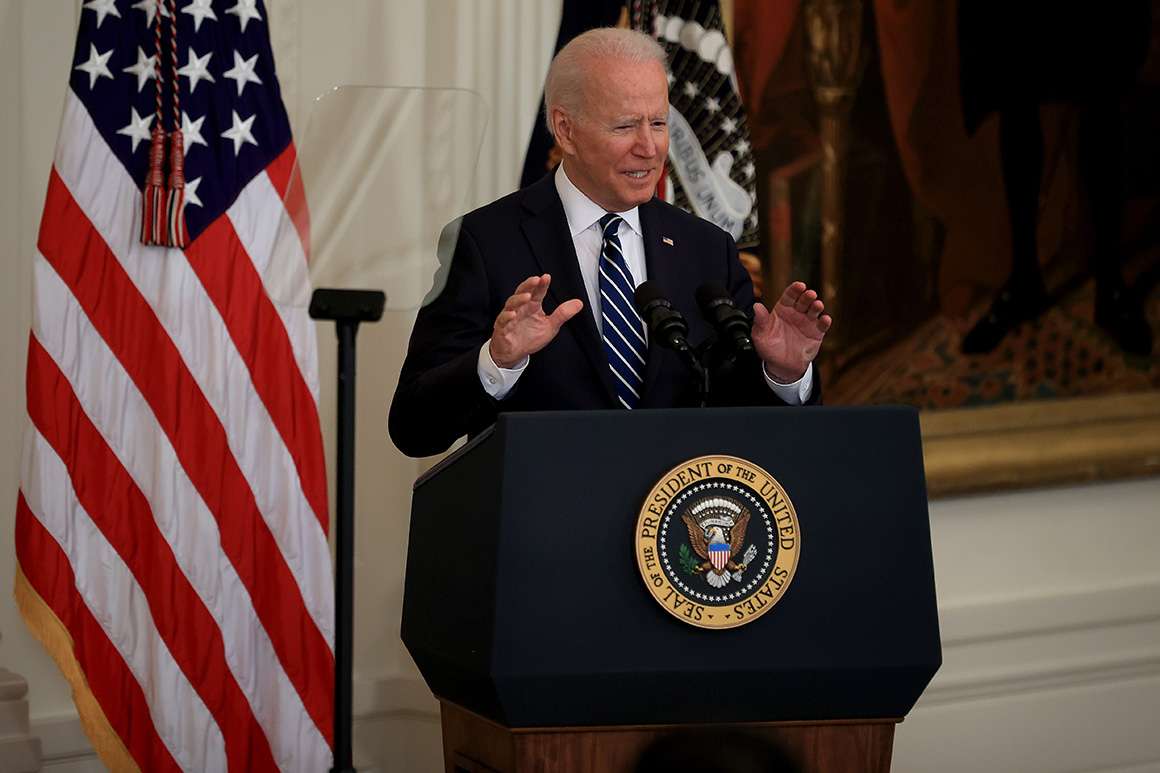 Experts largely agree that the White House usually has little to do with short-term moves in gasoline prices, which are a factor of global oil prices, U.S. refinery operations, and — especially this year — a sharp jump in demand from drivers as people emerge from lockdowns and travel resumes.

But that hasn’t kept the narrative from spreading across conservative media, where pundits are drawing comparisons to the Jimmy Carter administration, and trickling down to viral social media posts pinning gas prices to Biden’s climate agenda.

“The Biden administration’s strictures on federal lands production have no direct connection to today’s pump prices, but in messaging, a president who is restricting oil production renders himself vulnerable to criticism anyway,” said Kevin Book, managing director at advisory firm ClearView Energy. “So never mind physics or economics. Communications is a totally different world.”

Jeanette McGee, an AAA spokesperson, said the primary reasons for the price surge are the reawakening economy as the country grows more optimistic about vaccination against Covid-19, along with increased global oil demand and a surge in leisure travel.

If anything, the rise in prices is one sign of a boost in economic activity that the Biden administration is all too happy to take credit for. McGee also added that though prices may be on the rise, they haven’t reached levels where Americans typically start making lifestyle changes to accommodate them — generally around $3.25 to $3.50 per gallon.

“Vacations this summer, regardless of gas prices, are going to be incredibly popular,” McGee said. “It’s back in full force.”

When asked about gasoline on Friday, White House press secretary Jen Psaki pointed to the U.S. economic strength as pushing up oil prices. But she said the administration is sensitive to the pain that rising prices at the pump can have on Americans, and she used the rise to defend the White House’s insistence on not raising gas taxes to pay for the bipartisan infrastructure plan.

“That’s one of the core reasons the president was opposed to a gas tax … any tax on travel or vehicle mileage, because he felt that would fall on the backs of Americans who are returning to their workplaces, who are returning their kids to school,” Psaki said.

Oil and gasoline prices are also hardly skyrocketing to the levels that drew particular ire during the George W. Bush era, when they topped $4.10 a gallon, and the Obama administration, when they flirted with $4.

Crude oil prices have staged a long rally after demand cratered during the pandemic, and U.S. benchmark prices have followed global oil prices in nearly doubling from a year ago, trading near $75 a barrel on Friday. Low prices last year had pushed dozens of U.S. oil companies into bankruptcy, and U.S. production remains about 2 million barrels per day below the peak hit in early 2020.

But that message can be lost on voters, especially with a long historical trend of presidential approval ratings inversely tied to gas prices.

It’s not a strategy unique to Republicans. Mark Jones, a political science fellow at Rice University, points out that Democrats hammered Republicans in the 2008 presidential election on the surge in gas prices. But Book notes Democrats largely stuck to other hot-topic talking points against Trump in the lead up to the 2020 election.

The Biden administration could counter the message by pointing out that gas prices rise during economic recoveries, but Jones said Republicans will have an easier storyline to sell.

“I think the Biden administration is probably just best off trying to deflect the topic and focusing on other topics,” Jones said.