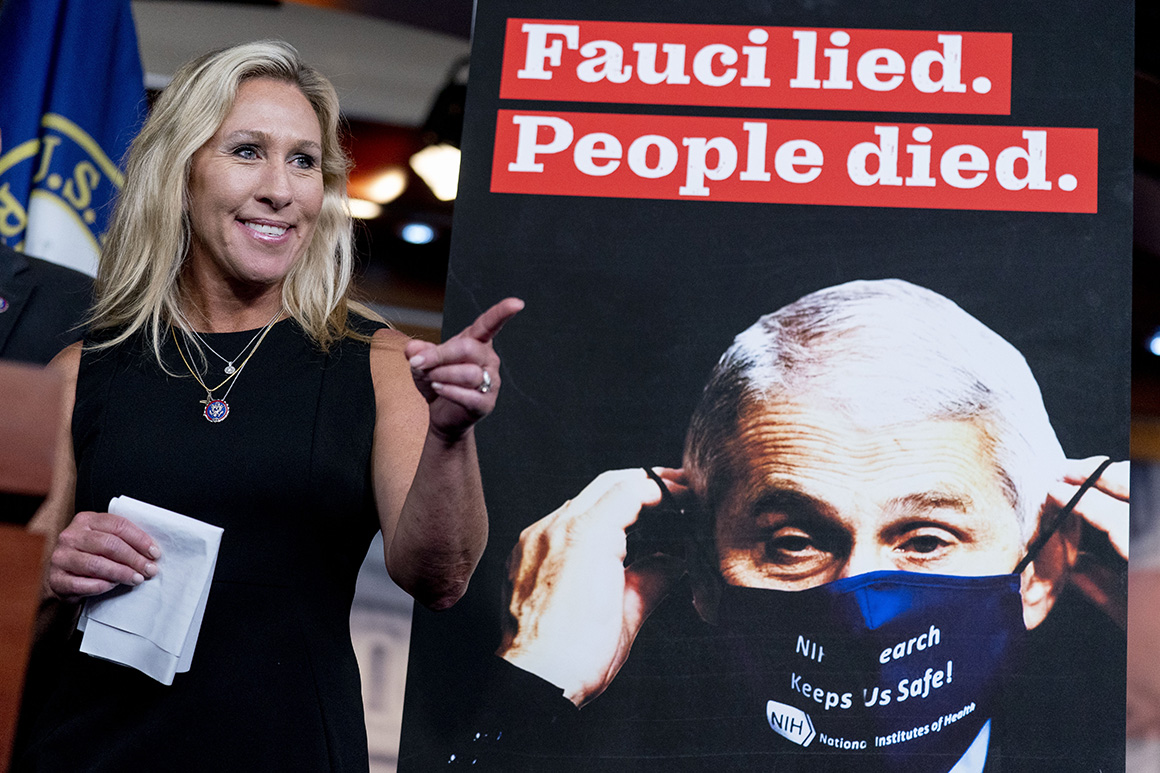 The Republican Party is being torn apart by the debate over whether to more aggressively promote Covid-19 vaccines, pitting those alarmed by the virus’ resurgence against a faction that has spent weeks sowing fear about the immunization push.

The deepening divide became apparent this week on Capitol Hill and across the party, with a contingent of prominent conservatives vocally advocating for the shots — even as others emphasized the need for the GOP to stick to principles of “individual liberty” and stay out of Americans’ medical decisions.

While top Republicans like Senate Minority Leader Mitch McConnell and Alabama Gov. Kay Ivey pleaded with people to get vaccinated, others downplayed the threat of a Covid-19 resurgence — wary of angering a GOP base that views the sputtering vaccination effort as a political blow to President Joe Biden.

A news conference with Republican doctors in Congress, ostensibly to discuss the Delta variant, instead turned into a forum for the lawmakers to repeat unverified claims that the virus escaped from a lab in China, and to bash Democrats for not thoroughly investigating Covid’s origins.

That wariness among much of the Republican Party, borne out in 11 interviews with GOP policymakers, could further complicate the pandemic response as the Delta variant drives up case counts and hospitalizations while fewer Americans line up for shots. The deteriorating situation is likely to weigh heaviest on GOP voters: eight of the 10 states where Covid-19 hospitalizations were rising fastest are led by Republican governors.

After getting his first Covid-19 shot this week, House Republican Whip Steve Scalise (R-La.) repeatedly encouraged others to do the same. But given an opportunity Thursday to refute the vaccine safety fears fanned by prominent conservative skeptics, the chamber’s No. 2 GOP lawmaker demurred.

“I haven’t heard any conservatives raising doubts,” he said, a day after Charlie Kirk, co-founder of the conservative student group Turning Point USA, raised concerns about the vaccines’ safety on Fox News.

The posture has exasperated Biden administration officials and public health experts and hamstrung a vaccination effort that has so far reached 68 percent of American adults — below the target the White House had hoped to hit nearly three weeks ago.

Daily vaccination rates have dropped steadily, with the U.S. averaging fewer than a half-million shots a day since July Fourth. And after Republicans seized on President Joe Biden’s vow to go “door to door” to encourage vaccinations to falsely suggest the government would track those who refuse to get the shot, administration officials say they’re struggling to bridge an ever-widening partisan divide.

“This has profound consequences,” a senior administration official said of the hostility within parts of the GOP. “You’re putting people in harm’s way, and this is damn serious. This is as serious as we’ve been at.”

The faltering vaccine campaign — combined with a rapid comeback of the virus that’s almost exclusively hit unvaccinated Americans — have convinced some notable Republicans to ratchet up their pro-vaccine rhetoric.

McConnell has on multiple occasions promoted the shots, at one point decrying “all of these other voices that are giving demonstrably bad advice.” On Friday, Ivey said “it’s time to start blaming the unvaccinated folks” after her state suffered a steep acceleration in Covid-19 cases.

Jerome Adams, the former Trump administration surgeon general, has also taken on an increasingly public role in advocating for the vaccination campaign – issuing dire warnings about Delta and seeking to allay fears in dozens of tweets each day, as well as in op-eds and on television.

And in Congress, some lawmakers admitted to frustration that the party has not been more out front promoting the shots.

“I mean, it’s our base, right?” Rep. Adam Kinzinger (R-Ill.) said in an interview. “These are our voters and I think we have a responsibility to say, get vaccinated.”

Yet few were eager to take direct aim at the loudest and most influential vaccine skeptics within their party, or show much enthusiasm for personally combating the misinformation that has flourished on social media platforms, conservative outlets and in Congress.

“To me, the single most important public health measure we can encourage people to take is to get vaccinated,” said Sen. John Cornyn of Texas, where Covid-19 hospitalizations have risen more than 50 percent in the last two weeks. “But we’re a free country — people are at liberty to state their own views.”

In interviews, several lawmakers refused to directly address Tucker Carlson, the popular Fox News host who for months has swung between supporting the vaccines and raising a range of unsubstantiated or misleading concerns about their safety.

Others either blamed the Biden administration for alienating conservatives, pinned their hopes to a surge once the Food and Drug Administration fully approves the vaccines or downplayed the urgency because the Delta variant has not yet shown to be more virulent than prior strains.

“The good news is it looks like it’s no more virulent,” said Rep. Andy Harris (R-Md.). “If you look at deaths and hospitalizations, it’s probably no worse than the original virus.”

The GOP’s most vocal vaccine skeptics have in the meantime amplified their doubts largely unchallenged by those within their party. Georgia Rep. Marjorie Taylor Greene’s false claim that Covid-19 was “not dangerous” for some people earned a suspension from Twitter — but little more than shrugs from her colleagues. And a month after organizing a widely criticized event to spotlight the vaccines’ rare side effects, Sen. Ron Johnson (R-Wis.) continued to object to the Biden administration’s efforts to get all Americans vaccinated.

“It creeps people out when government is almost forcing something down somebody’s throat,” he said. “This is a drug trial, and they’re being asked to participate in it and they should be able to choose yes or no without pressure, without coercion.”

Perhaps to a greater degree than most, those are views that have made Trump-era health officials cringe — especially after their work developing vaccines in record time emerged as the rare bright spot in an otherwise disastrous Covid-19 response.

“The entire Operation Warp Speed team would like nothing more than 100 percent of Americans eligible to be vaccinated,” said Paul Mango, a former HHS deputy chief of staff who worked on the vaccine development sprint.

Yet apart from scattered private discussions, few have taken an outsized public role in pushing the vaccination campaign — with former officials doubtful they could have a significant impact or still bitter over the Biden administration’s early dismissals of their work plotting the vaccines’ production and rollout.

“If I’m asked, I’ll do it,” Mango said, before taking a dig at Biden’s chief medical adviser. “But I’m not going to be a Tony Fauci out there running after the cameras.”

The one person who might be able to unite the GOP behind the vaccine campaign, he added, is former President Donald Trump. But neither Trump nor the Biden White House have shown any inclination to partner up. And even then, there’s no guarantee the vast majority of Americans could be convinced.