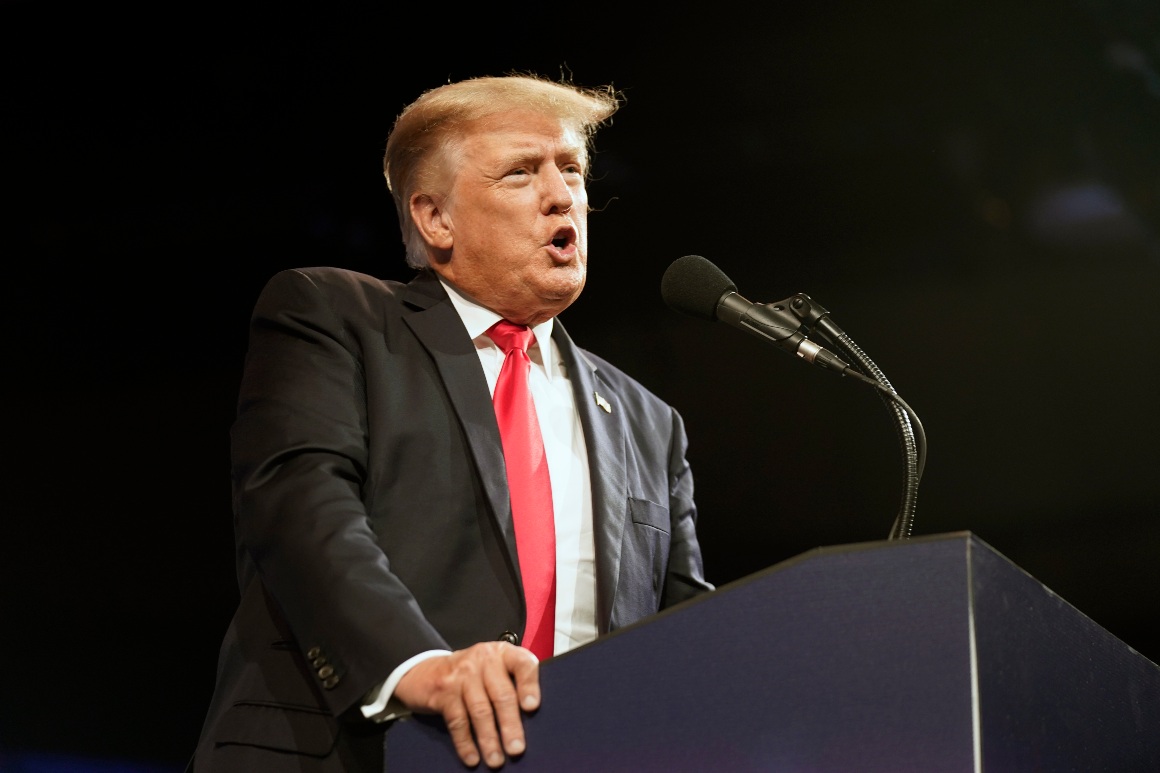 The legal reckoning for attorneys who pushed former President Donald Trump’s spurious claims of election fraud advanced Monday as a federal court in Detroit held a hearing on whether to impose sanctions over a suit filed last year seeking to decertify Joe Biden’s victory in Michigan.

Two of the most prominent attorneys in the pro-Trump camp — Dallas-based Sidney Powell and Atlanta-based L. Lin Wood — are among the lawyers who brought the unsuccessful suit and whose conduct is under scrutiny by U.S. District Court Judge Linda Parker.

Another pair of attorneys involved in the case, Emily Newman and Julia Haller, served in a variety of Trump administration posts but appear to have left government late last year to aid Powell in the post-election litigation.

As the hearing opened Monday via videoconference, several lawyers sought to minimize their roles in the litigation. While Wood was listed as one of seven attorneys on the first iteration of the suit last November, he stressed to the judge that he wasn’t involved in preparing it.

“I played absolutely no role in the drafting of the complaint, just to be clear,” Wood told Parker. “I did not review any of the documents with respect to the complaint. My named was placed on there, but I had no involvement.”

Parker asked Wood directly if he’d given permission for his name to be placed on the suit.

“I do not specifically recall being asked about the Michigan complaint, but I had generally indicated to Sidney Powell that if she needed a quote-unquote trial lawyer, I would certainly be willing or available help her,” Wood said. “Would I have objected to being included by name? I don’t believe so.”

Under questioning from the judge, Powell said she believed she did get Wood’s consent to put his name on the suit. “I can’t imagine I would ever put his name on any pleading without understanding that he had given me permission to do that. Might there have been a misunderstanding? It’s certainly possible,” she said.

A lawyer for Newman, who worked in the Trump White House, the Department of Homeland Security and the U.S. Agency for Global Media, also distanced her from the Michigan litigation.

“My client was a contract lawyer working from home who spent maybe five hours on this matter,” said Thomas Buchanan. “She wasn’t really involved….Her role is de minimis.”

While Powell and other lawyers were on the Zoom hearing, she dropped off the screen for a time, drawing a mild rebuke from the judge.

“Would you maintain the camera, Ms. Powell, please? I’d like to have everyone here,” Parker said.

The City of Detroit, which intervened as a defendant in the suit to defend the election results, triggered the sanctions process about six months ago by complaining that the case was frivolous and littered with untruths. The city’s motions asked Parker to impose monetary penalties on the lawyers in the case, to require them to pay the attorneys’ fees of the city and other defendants in the case, and to refer the lawyers for potential disbarment proceedings.

An attorney for the city, Herschel Fink, said the initial filing in the case was garbled and unprofessional.

“What they filed in the first complaint in this case was an embarrassment to the legal profession,” Fink said. “It was sloppy. It was unreadable and it was mocked.”

In a motion last December urging punishment of Powell, Wood and others, the city’s legal team wrote: “If sanctions are not deserved in this case, it is hard to imagine a case where they would be.”

“In a case involving the election of the President of the United States, the parties and their attorneys should be held to the highest standards of factual and legal due diligence; instead, they have raised false allegations and pursued unsupportable legal theories,” the city argued. “It is time for this Court to send a message back: lies and frivolous claims will not be tolerated. This abuse of our legal system deserves the strongest possible sanctions.”

Last December, Parker rejected the temporary restraining order the suit sought to decertify the presidential election. The case was formally dismissed in mid-January. At Monday’s hearing, Parker sparred with Donald Campbell, an attorney representing most of the pro-Trump lawyers involved, and with Howard Kleinhendler, one of those lawyers.

The judge continued to sound deeply skeptical about the pro-Trump lawyers’ case, referring to some of the witnesses they relied upon as “purported experts” and arguing that their filings contained obvious flaws.

“The court is concerned that these affidavits were submitted in bad faith,” Parker said. “The question is is there anything there on the face of these submissions that would give counsel pause.”

Haller suggested Parker seemed to be demanding a level of scrutiny not customarily required of lawyers relaying witness accounts to the court. “I simply am confused as to the standard that is being applied when it comes to submitting a complaint,” she said. “We did not submit falsehoods.”

The State of Michigan and Democratic Gov. Gretchen Whitmer are also backing the effort to punish the pro-Trump attorneys involved in the suit.

Fink said the misstatements in the court filings, like a claim that 139 percent of registered voters in Detroit cast ballots, had grave consequences. The correct turnout number reported by the city is just under 51 percent.

“These lies were put out into the world and when they were put out into the world they were adopted and received by” influential people such as Trump, Fink said. He said that when Trump called Georgia Secretary of State Brad Raffensperger to pressure him to flip the election to favor Trump, the president brought up the Detroit numbers. “President Trump explicitly referenced the 139 percent voting statistic in Detroit as though it were fact. These are a the consequences. It’s the consequence of how they abused this system.”

In a court filing earlier this year, a lawyer representing Powell, Wood and the others who brought the case on behalf of would-be Trump electors called the motion for sanctions “baseless” and “procedurally improper.”

Lawyer Stefanie Lambert Junttila called the drive “an attempt to create a dangerous precedent that could dissuade future civil rights and voting rights plaintiffs from bringing their disputes to court.”

Some of the responses by the Powell-Wood team to the request for sanctions were as pugilistic as their actions in the aftermath of the election. In response to claims that the pro-Trump lawyers lied in their court submissions, Junttila fumed: “If this were simply the ranting of a third rate five-man Detroit law firm, we would dismiss this behavior as pathetic unprofessionalism. But these are the dirty media-attention hungry, slanderous and completely out-of-bounds statements by representatives of the City of Detroit.”

Parker, an appointee of President Barack Obama, ordered last month that every attorney whose name appeared in any filing by the plaintiffs in the case “be present” at the hearing, eventually scheduled for Monday. However, last week, Powell, Wood and five other lawyers asked to appear solely through other lawyers retained to represent them.

Parker rejected that request without explanation, but did indicate that the pro-Trump attorneys could attend the hearing “virtually.”

Fallout from the dozens of post-election lawsuits continues in other courts and legal venues, resulting in major professional headaches for many of the lawyers involved.

In February, the Georgia State Bar sent Wood a 1600-plus-page complaint proposing bar discipline against him. Many of the instances of alleged misconduct cited stemmed from the flurry of election-related suits, including the one in Michigan. Wood filed an unsuccessful suit against the bar over the process, but is continuing to fight the effort to punish him.

And last month, a court in New York suspended outspoken Trump lawyer Rudy Giuliani from practicing law in that state as a result of his statements in connection with election-related litigation. Last week, a court in Washington, D.C., made a parallel move to suspend Giuliani’s bar license in the city until the disciplinary proceedings in New York are resolved. Giuliani has defended his conduct and said he plans to contest the New York suspension at a hearing.

In addition, a federal judge in Colorado is set to hold a hearing Friday on another motion for sanctions over a suit other pro-Trump lawyers filed last December seeking $160 billion in damages from voting-machine-maker Dominion Systems.